Songbringer – Now That’s What I Call an Adventure

Songbringer – Now That’s What I Call an Adventure

Normally when I’m at a loss for words concerning a game it’s one of those that sits squarely in the middle between good or bad. Songbringer is not one of those games. Quite the contrary, it’s good, a whole lot of good… Look, I don’t want to be the 50th person refering to it as similar to a certain popular game of old that starts with a Z (unless of course I get a prize for doing so). Doing so is a bit of a disservice as I’ve never literally spent half a day playing that game without realizing how much time has passed in the same way as I did with Songbringer. Yes, that actually happened.

So pixelated action adventure with some procedural generation and RPG elements and liberal use of peyote err cactus. Personally I would just scrap the label system and replace it with one word: Awesome. You take the reigns of Roq and his trusty skybot pal Jib. Crashed on a strange planet you find a sword and, upon picking it up, inadvertently trigger the start of a war, oops. Or maybe you didn’t pick up that sword, Songbringer is totally open ended, you can do, or go, where you want. If you are trying to follow the plot however, this can sometimes be a bit of a curse, as with all these non-linear games. 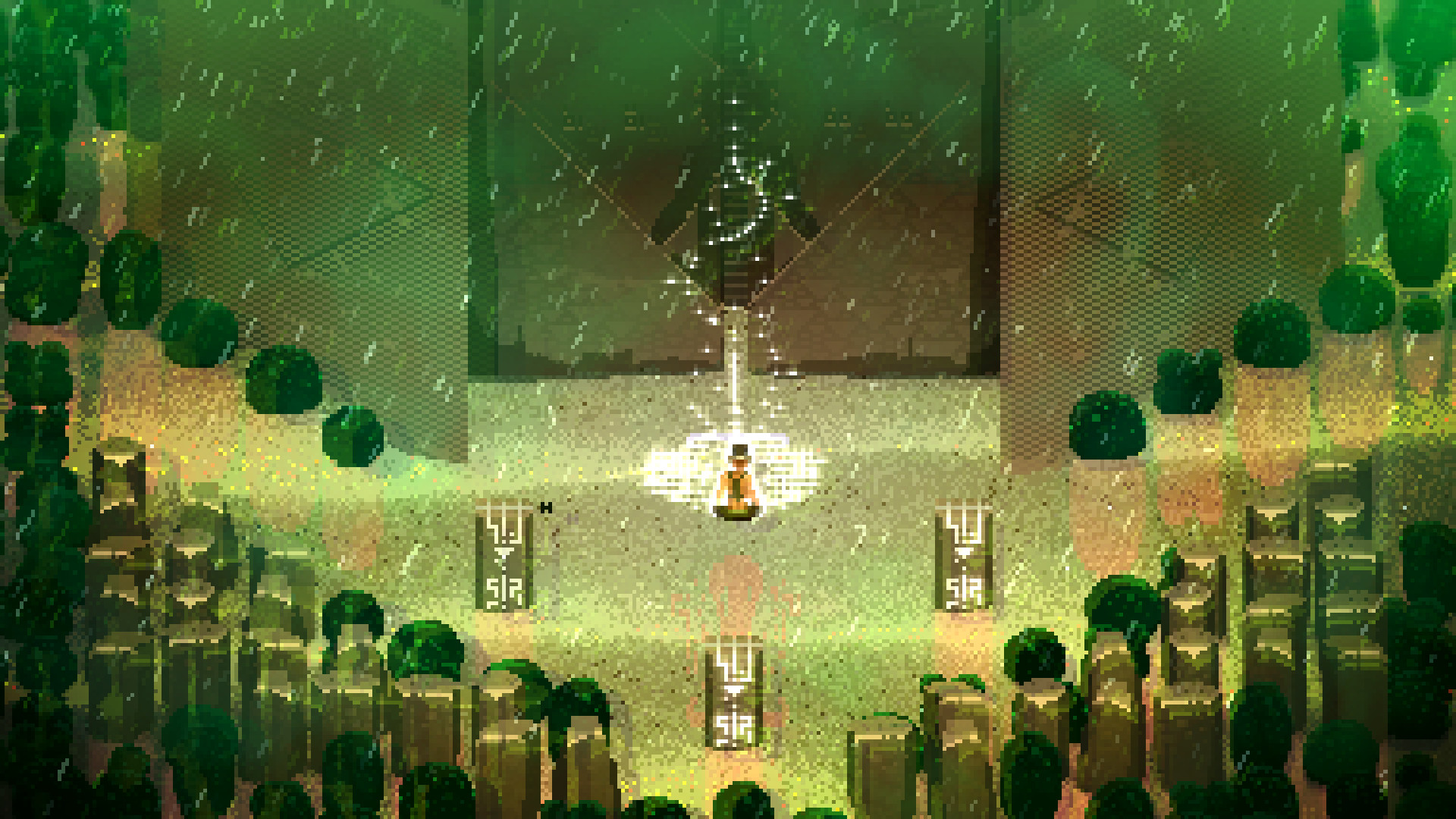 Except it’s not here, I spent a bit too much time not really moving forward and a mysterious figure silently lead the way to where I should head to. I still had to figure out what to do when I got there, but it did keep things moving along. Other games this would have lead me to getting stuck and scouring the internet for help, no need here. It’s a great hint, if you want it, without ruining the feeling of doing it your own way. But the do it yourself attitude is ever present. While there is a more natural order to the dungeons in game there is little to make it so you have to do them in order. The do it your own way even goes into crafting, you can create a flaming sword, or maybe lightning, or maybe… yup pretty fantastic there too.

What sort of action adventure game would this be without dungeons? Answer: a terrible one. But I already established Songbringer isn’t a terrible game, so there are 10 in game. They are loot, monster and puzzle filled. The bosses aren’t a joke either. They each have weaknesses that can be exploited, but that doesn’t mean they are going to go down without a fight, or even easily. My particular nemesis was a giant blob and it took quite some time for me to get it through my thick skull what I needed to do. I was so happy when I got it, not so much when later I had to face 2 of them at the same time and had completely forgotten what I did to win the first time. 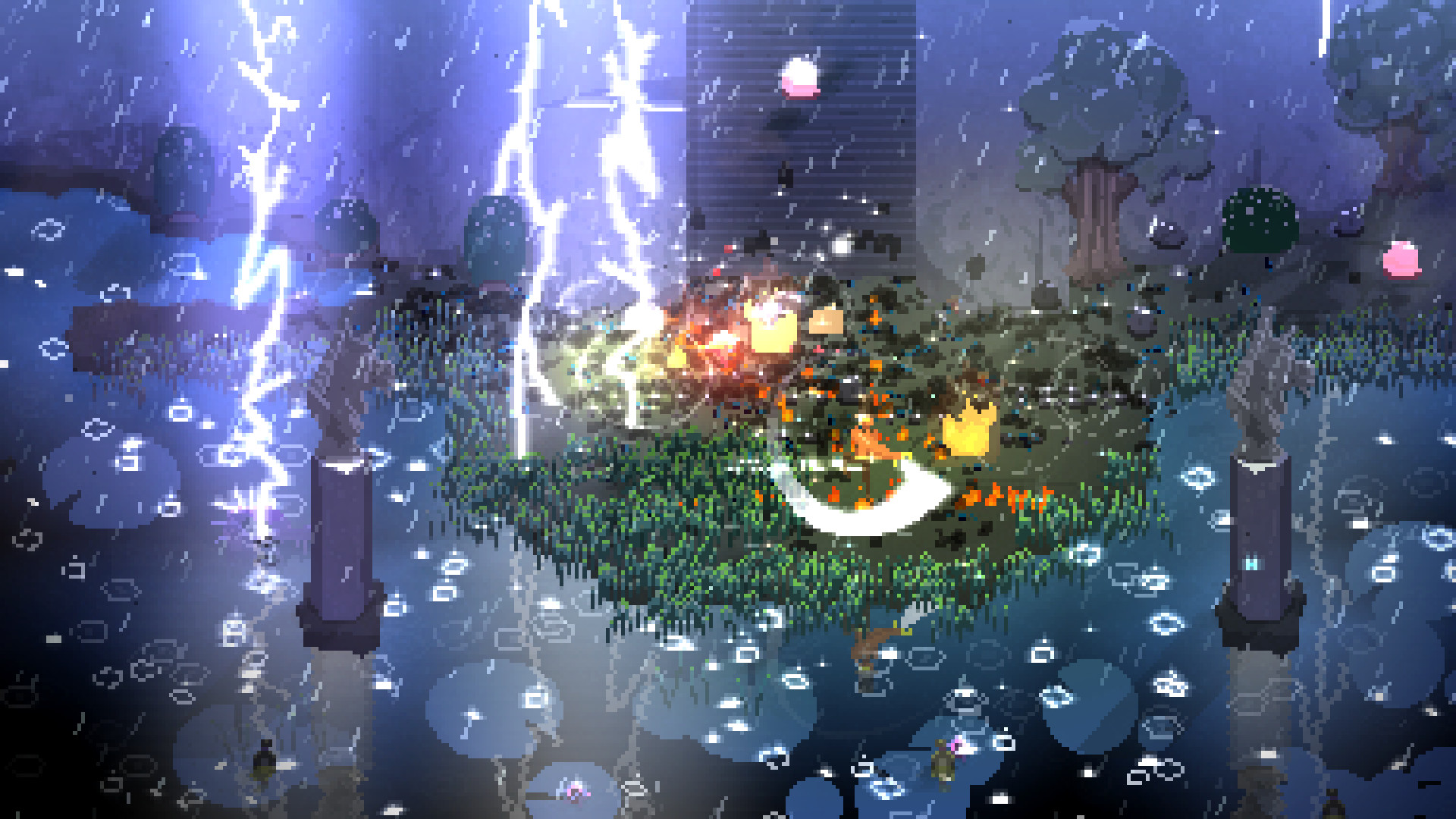 It’s not all 100% roses though. The map is relatively large and can be prone to a good amount of time wasting if you don’t have the fast travel option. Again the non-linear part can make the lack of faster travel an issue solved early or one that drags on till late depending on what that particular seed has in store for you. The combat is some basic fun and while I generally did enjoy it, it was tough to determine at times just which way I was swinging my sword. When the room was filled with enemies, fire from my sword, lighting from Jib and all sorts of stuff I would occasionally find myself swinging wildly with my back to any foes. It’s relatively minor and can easily be dealt with but actually paying attention to what you are doing, something I occasionally struggle with.

Let’s talk some arts and crafts… err music. The art in game is wonderful. I love it, the retro feel, but an excellent looking one at that. I’m running low on adjectives for other superlatives, but suffice it to say, it damn well looks pretty. It sounds pretty too. Positively divine sounds and oh yeah, the sword, it hums a tune while swinging it as well.

If you haven’t figured it out by now, I absolutely loved Songbringer. It’s a the type of game that is addictive and fun and you can easily start playing it at midnight and next thing you know it’s 5:30 am and you have to get the kids up and ready for school in half an hour (that also actually happened). It’s games like this that really endear me to indie gaming, when not only do individuals have the vision for something great, but also the talent to bring it all to life in a meaningful way. This is great in nearly every way and has put itself on a short list for consideration once it’s time for Game of the Year awards. Yes, I went there and you should to. This is a must own.