The latest party game from Big Potato puts a new spin on a classic game and then ups the ante further with a large pinch of Disney magic in Sketchy Tales: Disney Edition.

The premise sounds taxing but is very simple after the first game. Players each draw one character card and one action card. Both cards offer multiple choices just in case any of your fellow players are a little bit of a snoop. Once received, each player selects one of the characters illustrated on their card and one of the actions on the other. It’s now down to your skills with a pen as you are each tasked with drawing your selected character carrying out your selected action. We tried to keep things under control by allowing players only three minutes to craft their Picasso.

At this point you each pass your creations clockwise around the group. Once received by the next player they each have to attach a new board on top of your original card and write down what is happening and to whom. The cards are then passed again clockwise around the group and the next player has to draw what has been written by the previous player. The steps continue to be repeated until your original set returns to you and then players take it in turns to lay out their cards as a story to try to explain how it’s got from the original selection to where it is now. Most accurate wins points but also so does the funniest. 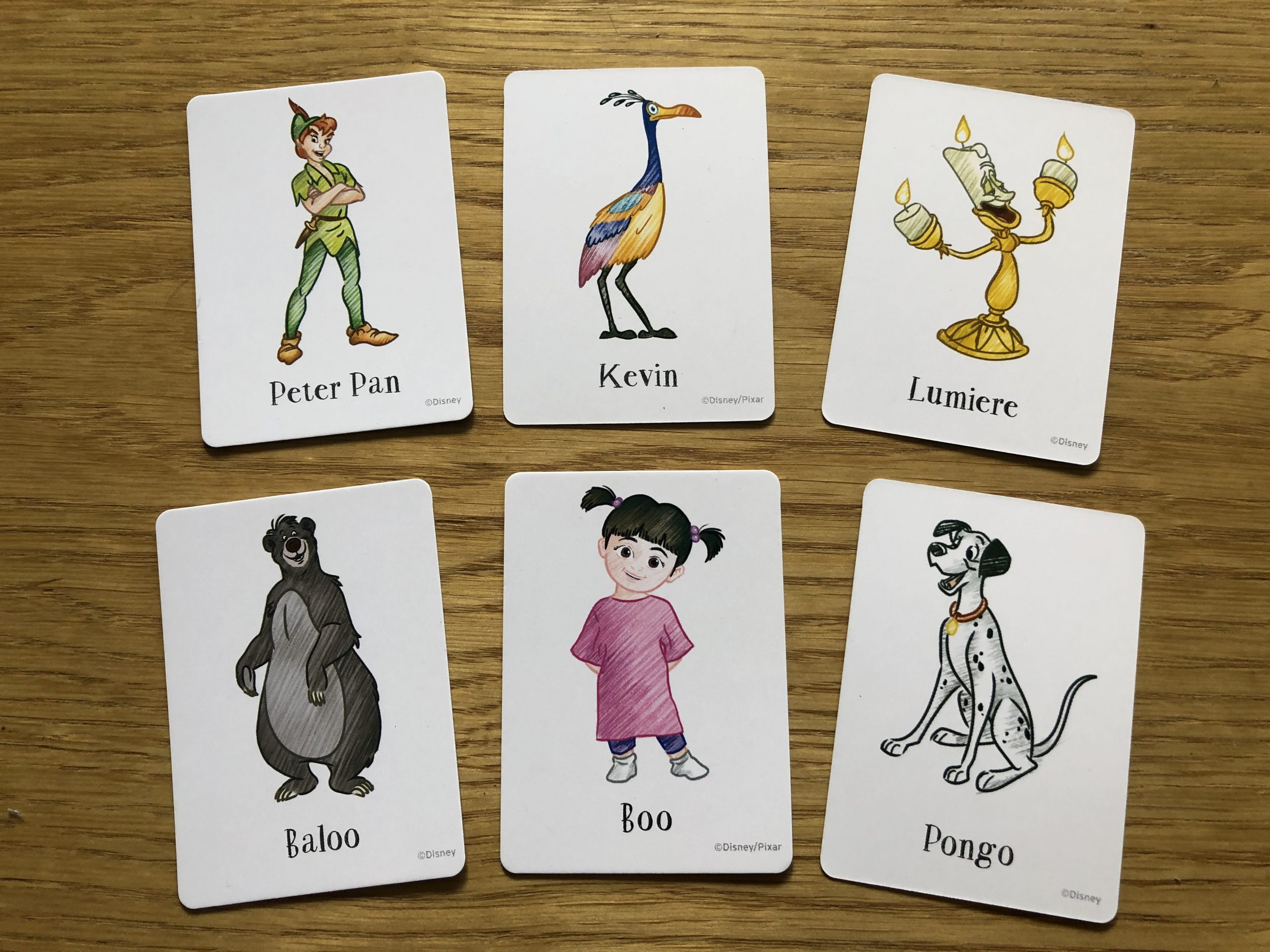 When I first heard about Sketchy Tales: Disney Edition I felt a little bit nervous, my drawing skills are not particularly great. If we were playing a classic tabletop RPG I’d easily be placed in either the Wizard/Warrior role; as while Intelligence and Strength are high, Dexterity isn’t. I can picture what I want to get onto paper but unfortunately my monster truck hands just can’t translate it.

To my surprise however, that’s what Sketchy Tales: Disney Edition requires for groups to have the most fun/poor drawing. In fact a good mix of skill levels makes the most of the premise since it leaves each stage open to interpretation and to the imagination of the participants. It does however need a base level of skill given players need to be able to write down their guess. We played with our kids and if they had been any younger we would have ended up with only three players instead of four; which also sets the second prerequisite, you can’t play with less than four players as the dynamic just doesn’t work.

Over four players however and the number of chances for things to go sideways increases but so do the lengths of the rounds, Sketchy Tales: Disney Edition also tends to work best with an even number of players but don’t let that stop you if there’s only an odd number of gamers as you can make it work.

Given the recognisable characters from the Disney back catalogue it’s easy to see why Big Potato included them in a customized edition of Sketchy Tales. The well known characters also make it easier to try to put a name to the drawings created although we did find with a mix of drawing abilities we went off-piste rather quickly to our amusement.

Sketchy Tales: Disney Edition comes packaged with some well illustrated character cards showing off that classic Disney animation as well as a number of drawing cards for your own (dubious) illustrations. Packaged along with the cards are a number of drywipe markers with small sponges attached; these are delightfully used to erase any mistakes on your drawings or to clear the cards at the end of the game for the next round. Finally a set of Mickey Mouse clips to collate all your cards as you pass them around the group between rounds.

With four players, rounds took around 4-5 minutes with a game lasting 30-45 mins based on scoring enough points to win; although the group playing could decide to extend or shorten the game if required. Given the number of character and action cards there are so many combinations available that Sketchy Tales: Disney Edition has some great replay value; plus it’s a bonus it only takes about a minute to set up so a group can get straight into it without a lengthy preamble.

Family friendly, for all ages and drawing capabilities; Sketchy Tales: Disney Edition is a great take on the classic Chinese whispers formula and one where you definitely don’t have to be an artist to enjoy (or win).