In Shank’s line of business: revenge is straight to the point. When I start playing the first level of Shank instantly make me think – Is this game the love child of Quentin Tarantino and Genndy Tartakovsky rolled into one?

A blend of stylised drawing like that from a graphic novel, reminiscent of Samurai Jack, paired with the over the top violence, action, and hack ‘n’ slash road to revenge of Kill Bill?  Whilst it may remind me of those things at the start, the developers at Klei -back in 2011- brought something unique to the table for the indie, platforming gamer. Something which still proves to be both entertaining and challenging. 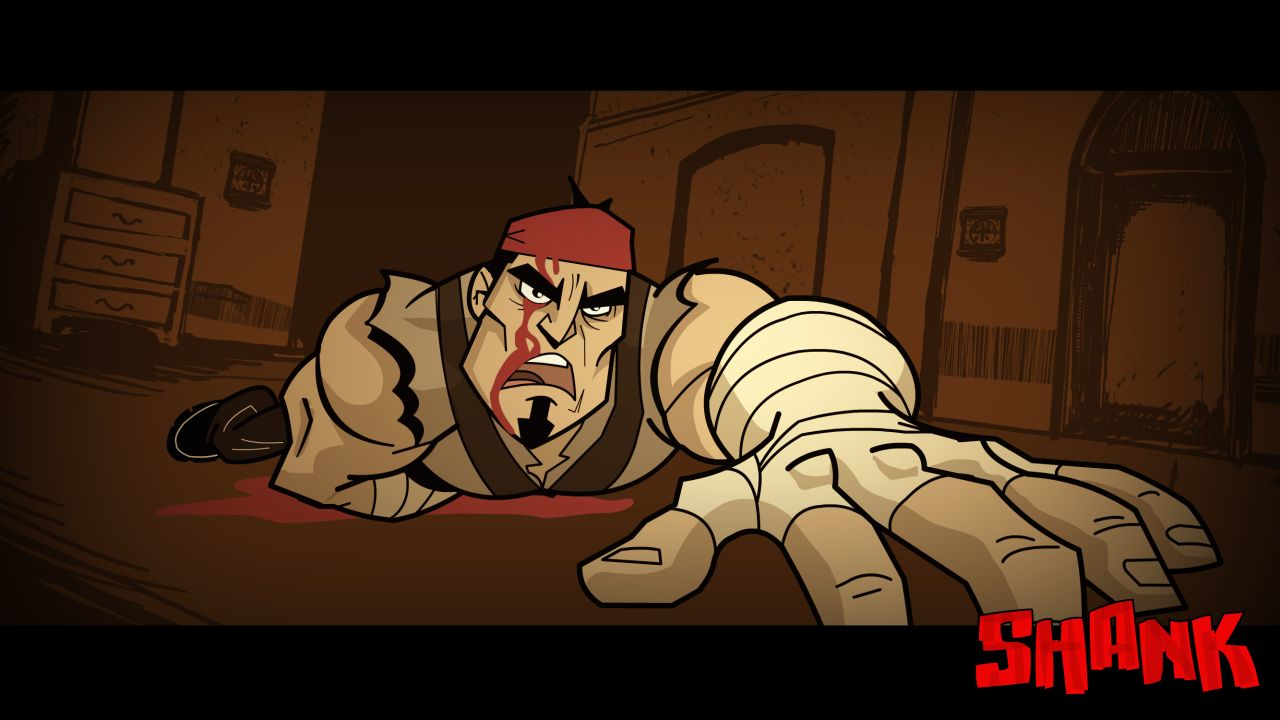 Shank is a hack and slash platformer at its core, with a large array of weapons that become accessible as you progress through the story, offering you numerous ways to butcher and carve through hordes of enemies,and tackle distinctive bosses as you search for your kidnapped wife on this rage-fuelled, blood-splattered path of vengeance. It’s without doubt called what it is for a reason.

Now, despite the fact that there isn’t a great deal of dialogue in Shank, this doesn’t make the story easily dismissible, instead showing that your actions (mostly slashing) speak louder than words. Yes, it does have a straightforward story – relying heavily on pleasing visuals which play out like a comic as the protagonist comes across many different opponents such as hulking wrestlers, battle-scarred vixens, seemingly endless gangsters, corrupt military forces, and many more. Even though we don’t know the precise location of where it all takes place, it is implied that it is somewhere in Southern America, more than likely Mexico due to the nature of some of the villains, as well as the main antagonist being a luchador. 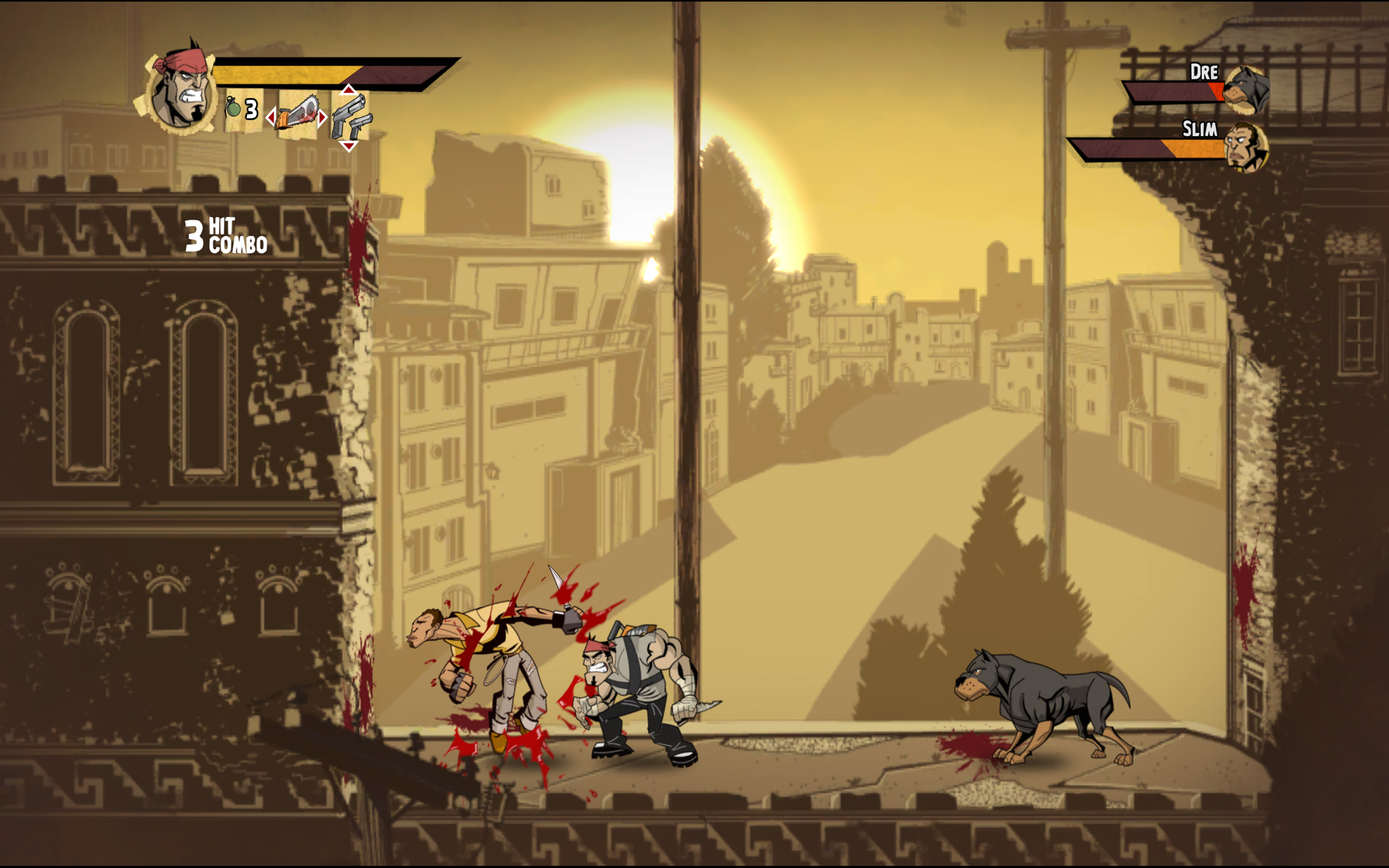 We follow Shank as he starts his journey, with the initial kidnapping of his wife, watching as he cuts his way through several different -and visually appealing- environments: Back alley bars, slaughterhouses (Appropriate!), whore houses, the back of locomotives. Each environment sets you up up for very interesting boss fights, which each require some thought, in most cases rather than trying to simply hack or blast your way through the situation, although that is still an option.

While everyone might not be the biggest fan of the visuals, the larger focus of this game is the gameplay that it offers. Now at first when I started playing, I felt like maybe some of the controls were a little clunky, a bit unpolished, and slidey. It took some getting used to. It also strongly suggests that the game should be played with a controller of sorts for the best experience, which definitely isn’t everyone’s cup of tea. After running through and mowing down the first few sets of enemies, you start to get the hang of it all -although dodging and rolling are still a little problematic, though not impossible to master- The issue comes in certain bosses punishing you for your mistakes, literally forcing you to climb that learning curve, while the rest of the game barely needs some of those mechanics. 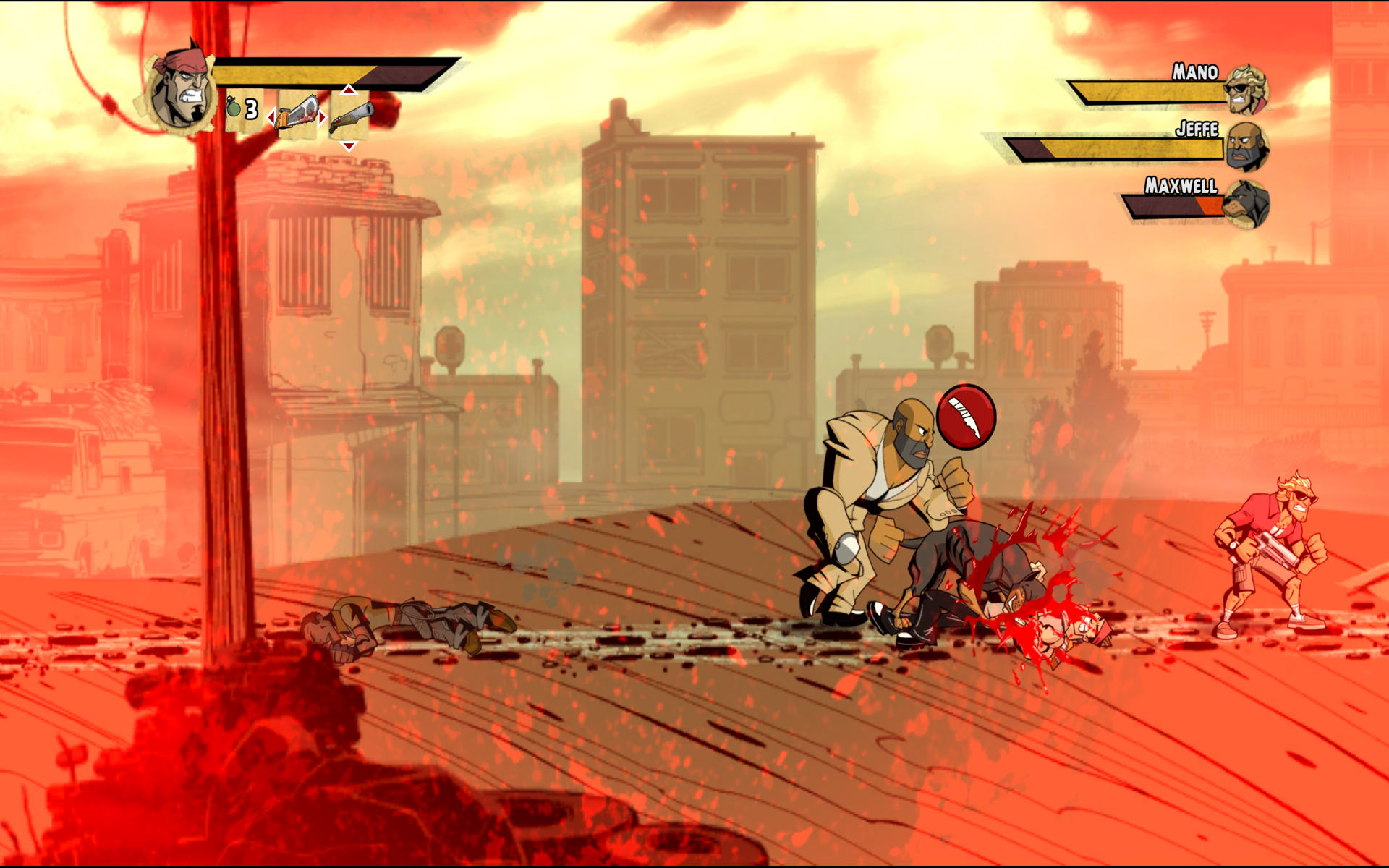 Starting out with your trusty shanks, dual pistols; and a chainsaw, I felt confident that this game may not be as complex and tricky as I’ve described it. Pulling off different combinations available from your weapons proves for some satisfying kills, as well as being able to leap on enemies and have at them, and the quick-in-a-pinch ability to grab and throw enemies when you’re being overwhelmed — which you definitely will, on several occasions as you progress.

Many of the enemies in Shank feel a bit too similar at first, but as you progress through the game you start to notice more diverse types crawl out from the woodwork. One design choice the team made for the game was to have their names displayed above health bars – personally I feel that it’s unnecessary as most are dead within seconds. From gangsters and thugs and their attack dogs (annoying to fight, I was never able to master dodging them, which proved very frustrating on several occasions!), to katana wielding femme fatales, and paramilitary forces caked in bulletproof armour and shields – there’s a massive selection of enemies with different attack styles by the end of the game. With this variety of opponents constantly shifting throughout the different levels, it can prove maddening. But, if you persevere and think about how using the different weapons that are available to you, you will start to find rewarding strategies to beat them.

Overall, whilst the game may be a little out-dated compared to more modern indie games and platformers, Shank still holds up quite well. With its combination of quick-thinking combat -what’ll keep you focused and entertained- and it’s easy to follow storyline. It proves entertaining for anyone who is a fan of action-filled platformers, and pick-up-and-go games in general. On the whole it doesn’t offer the greatest amount of replayability, and doesn’t really leave you feeling like you need any more time playing it. It leaves you feeling more satisfied that you’ve finally beaten it, but doesn’t particularly make you feel like you want to come back for seconds.