Senshi, from Arcane Wonders, is a small box, very low key design from Dan Manfredi. The game centres around the idea that each player is one of the titular Senshi — a trainee monk under study from an ailing master. With the master fading rapidly, the players compete to improve their strength, agility, wisdom and honour.

When the game ends, the player with the highest stack of chips (representing any one of the four disciplines) will win, but before a winner can be decided, the player who has the smallest individual pile will be eliminated. Senshi is a classic abstract strategy game that plays as quickly as the blurb suggests (fifteen minutes) but what I really wanted to find out, was whether a game so simple could feel satisfying to play.

There are very few components in Senshi’s box, making it easy to setup and fairly simple to explain. The chips are shuffled on the table and randomly built into stacks of three. Each chip represents one of the four disciplines that I mentioned before,and the players receive a small card that has a place for stacks of each colour. 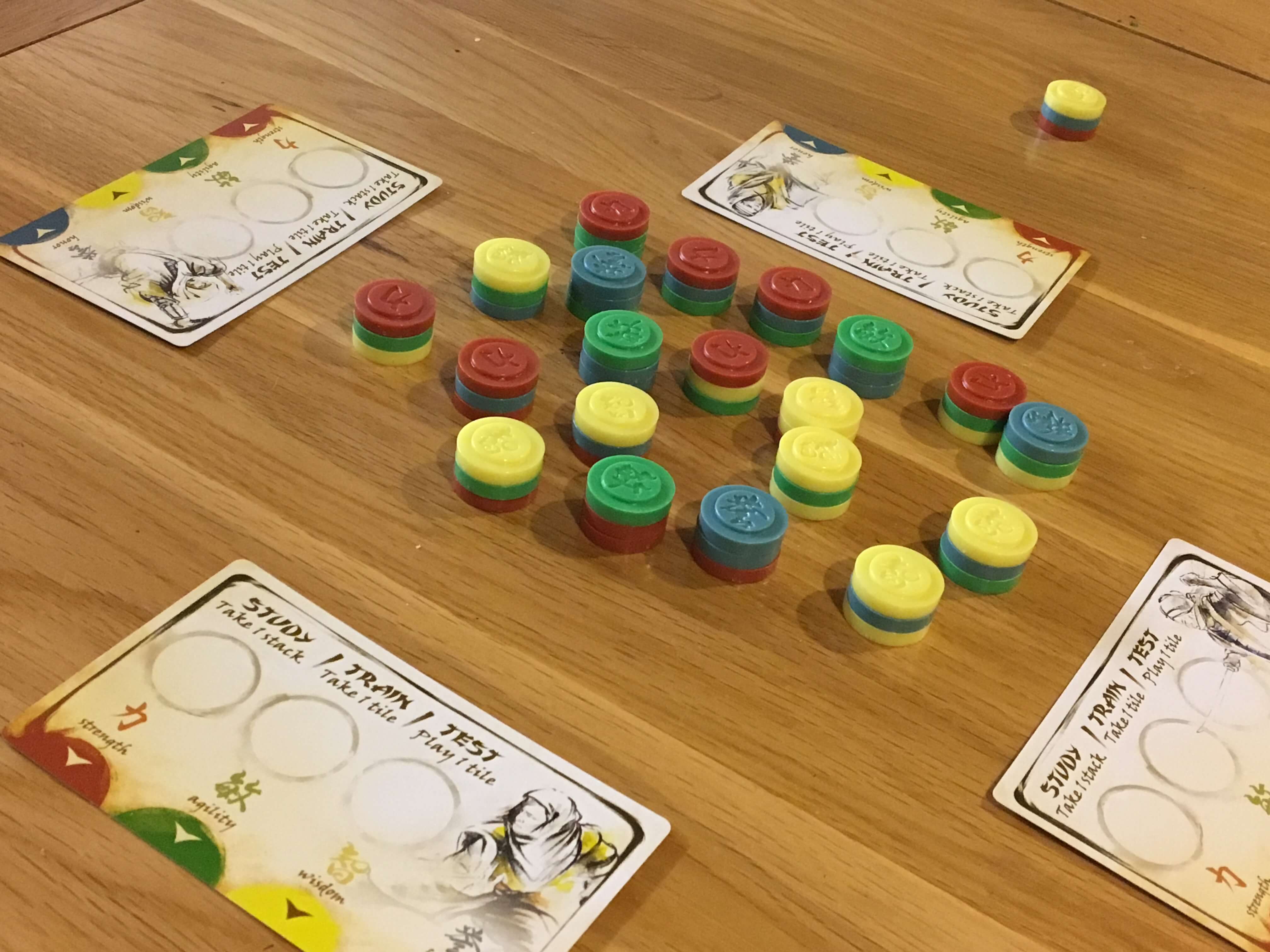 With the setup complete, play begins with a starting player, who will secretly choose one pile of chips and hold it in their hand. Each turn, the players will choose to take one of the three available actions, including: choosing a stack of chips to place on their card, taking one chip from the top of any stick (including those on other players cards) to add to their hand or score one chip from their hand.

This last action is the most involved, since it allows each player (including the one who chooses to score) to score each matching coloured chip from the top of stacks on their card. When this happens, those chips move to specifically coloured spaces just below their personal card. If you examine the pictures closely, you’ll see how each card has four spaces to hold stacks of multiple colours and four spaces below it for chips of matching colour — these have been scored.

There is no doubt that Senshi is as fast paced as promised, but it’s also more interesting at a strategic level than I thought it would be. There are several areas that make decisions interesting thanks to a mix of known and unknown information. What stacks are players drawing? What’s in their hand? Why did someone choose to pick up two green chips in a row? Are they building towards scoring three green next turn? My blue stack is currently the smallest in the game — I might lose if I don’t fix that! The only thing is, a lot of these decisions seem to flow in and out of focus. Things can change so fast (and often outside your control) that any strategy you might have will be short term at best. I’d almost suggest that Senshi is an abstract tactical game, rather than an abstract strategy game. I don’t think this is helped by the pieces, which being made of plastic, offer little to enhance the theme.

I kind of understand this. Plastic is much cheaper to produce than wood and there are a lot of pieces in Senshi. It is probably better, on balance, that Senshi has a much lower price point and a lack of theme than the other way around. The issue is that I just can’t seem to get my head around the idea that these coloured plastic chips represent my progress as a student in the ancient arts valued by these monks.

There are some other problems too. Because the decisions are so fleeting, it’s very hard to know which one is best. When I boil my turn by turn decisions down, I often feel that it makes little or no difference whether I do this or that. In effect, one stack looks much alike to another — does it matter which I take? Can I really manipulate the outcome of a scoring turn to my material benefit, when the other players can influence my stacks directly? 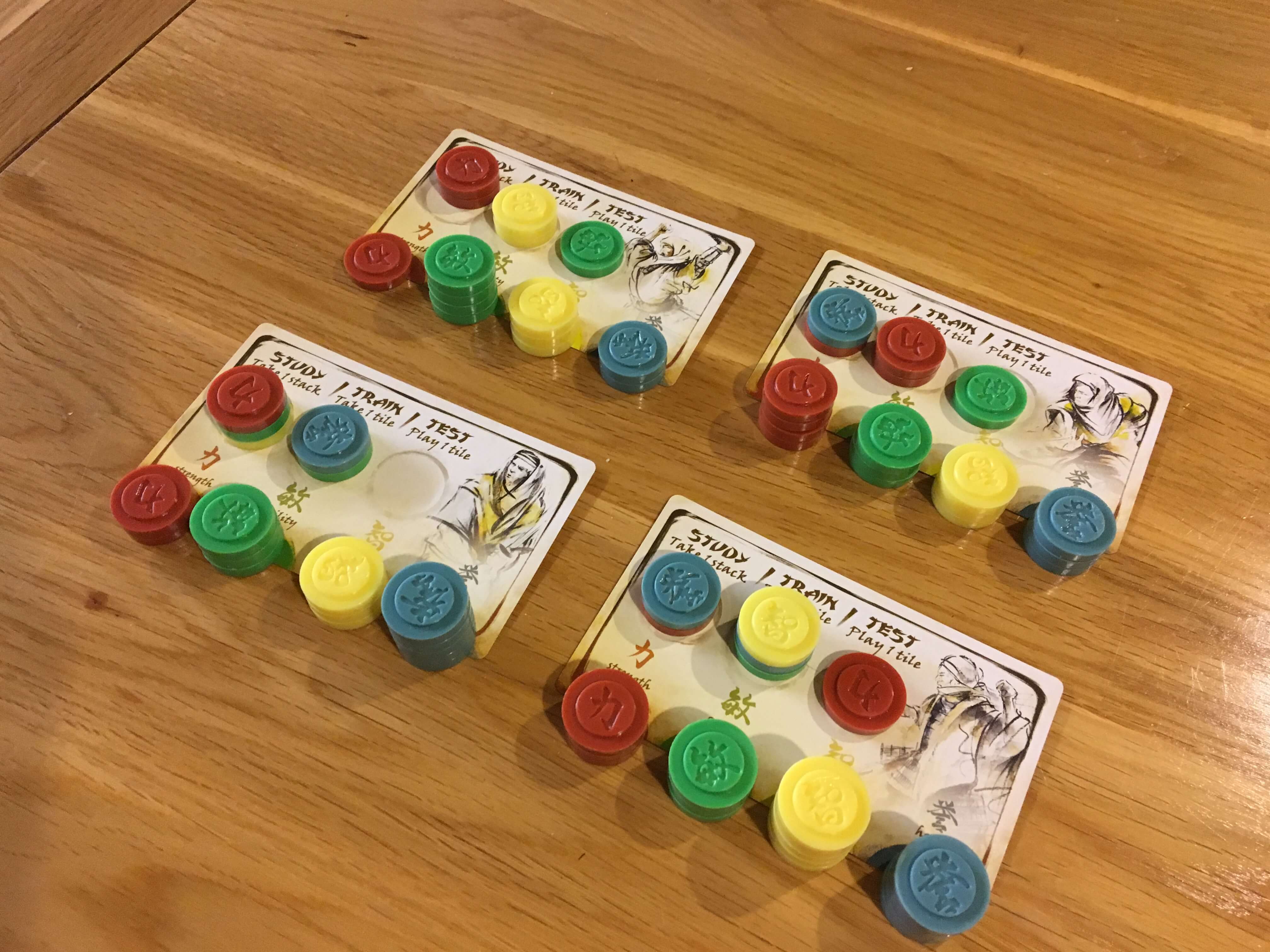 Senshi is an interesting game and it is by no means bad. The central idea, the speed of play and the number of decisions in the game are all great, considering how simple it is. The components and theme are lacking and that pace or impetus seems to detract from the weight of the decisions. That’s really the bit that lets this otherwise quite pleasant game down.

With all of the positives and negatives weighed up, Senshi is both cheap and small, and it plays very quickly. How much complex strategy can one actually demand from a game of this size and price point? Not much, I guess, and when considered like that, Senshi is pretty good. I think it was designed to sit alongside or replace classics like draughts, as a smart novelty to be played casually. On that level, it more or less succeeds — especially if its portable nature adds further appeal for you personally.

Senshi is available now, including over on Amazon. You can find out more about it on the website of publisher Arcane Wonders.