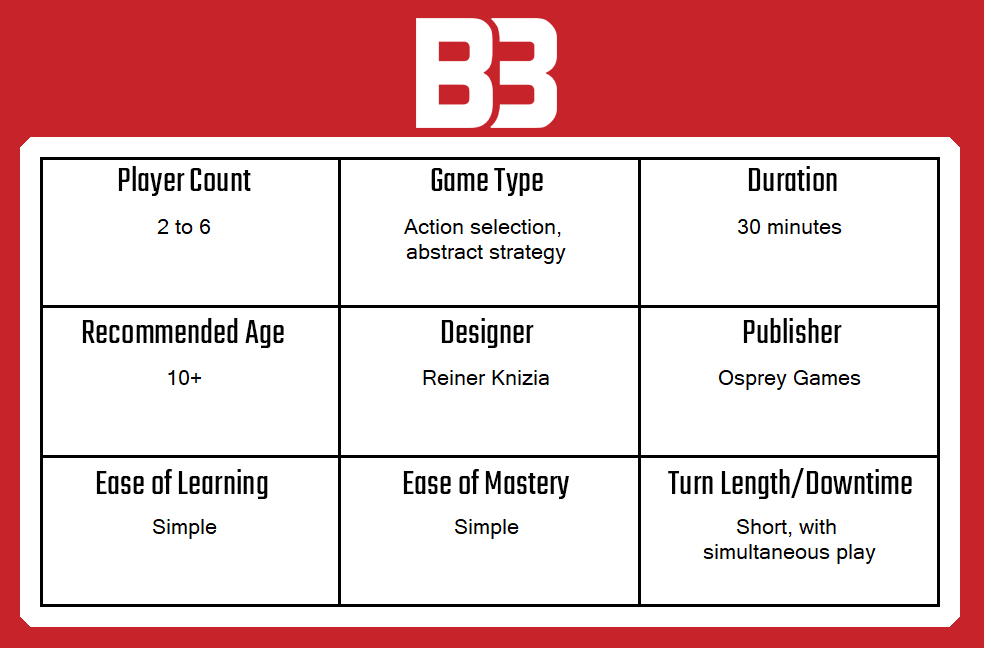 Every year the Emperor walks through The Imperial Gardens to greet the spring, every year he stops beneath the Sakura trees, and every year you try to paint his picture. This will be your year. Artists from near and far will step over their rivals to be closest to the Emperor as he reaches the cherry blossoms, hoping to paint a portrait that will please him. However, should one of them accidentally bump into the Emperor, they would be sure to earn his ire! 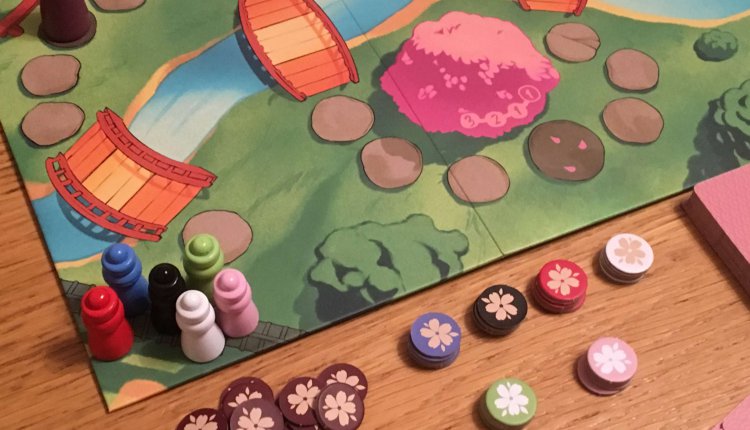 In Reiner Knizias’ Sakura, between two and six players all compete to be as close as possible to The Emperor when he reaches certain preset scoring locations. The more players there are, the more that will score and the winner is the player with the most points when The Emperor reaches the final location. At two players, there are a couple of mechanisms for running a dummy player, whilst at six the board is a little crowded, so Sakura is ideal with a party of four.

All movement in Sakura is driven by cards, which are chosen simultaneously and placed on the board. The idea is to jostle for position in order to score the most points, but players who actually bump into The Emperor (either because they move too far ahead of the pack or because he moves backwards) lose honour. The board in Sakura is physically small, but through elegantly designed bridge spaces, the track can be longer or shorter based on player count. 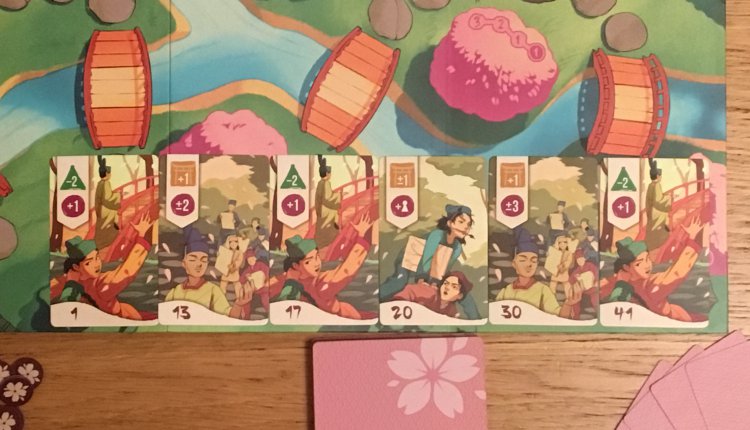 The components in Sakura are fairly understated, but nonetheless very attractive. The board is small as I said before, but it has attractive artwork that depicts the garden path crisscrossing a small stream and the surrounding blossom trees, all of which is very clearly laid out. A large wooden Emperor pawn moves through the garden, as do smaller, colourful player pawns, all of which fit together really nicely.

Aside from the board and the pawns, the only other pieces are honour tokens (featuring blossom icons that add great continuity) and the deck of cards that move things along. The cards themselves are attractive and there is a decent range of artwork on them. Each one is clearly laid out, although it does take a little time to memorise all of the movement symbols. Unfortunately, the card material has a kind of matte finish that makes them hard to shuffle, although it’s not too big a problem. 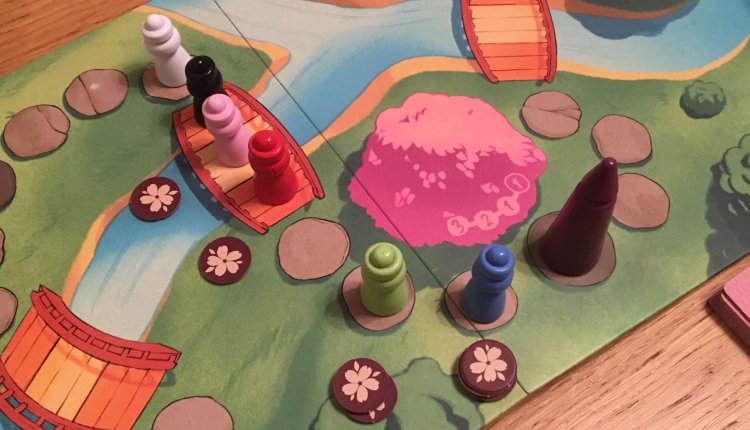 Each turn in Sakura is fast and simple. Players choose a card from their hand of five (all of which are drawn from a shared deck) and place it face down on the table. All cards are then simultaneously flipped and resolved based on the number shown on them. Quite often, the more powerful cards are those with predictable outcomes, but they are also usually the slowest to resolve so deciding which card to play has a number of layers of strategy.

Each card affects the board in a different way, but all of them either move one of the player pawns or The Emperor, or both. In most cases The Emperor will only move one space either forwards or back, whilst the player pawns will move up to three spaces. There are also cards that allow players to skip straight to the front, although such strategies introduce a fair bit of risk.

If The Emperor arrives at a scoring space, points are immediately awarded to the players based on how close to him they happen to be. Last place will never score, but up to four players might do in a six player game, which reduces the chance of ending up with a runaway leader. Because cards are chosen and placed simultaneously, there is very little downtime in Sakura. 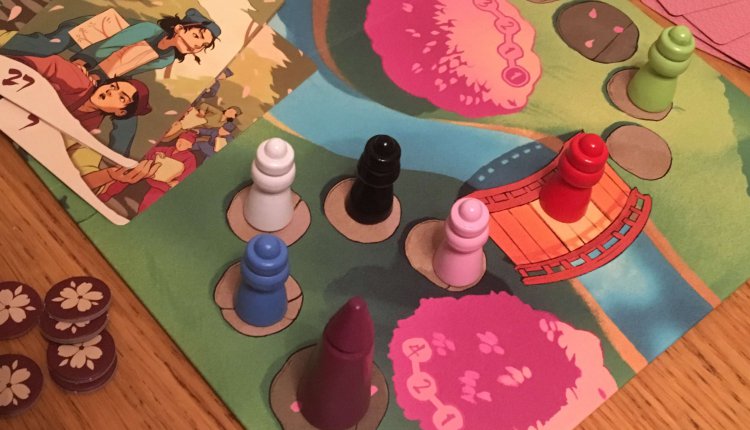 Sakura is a fairly lightweight game that looks appealing and generates enough strategic depth to remain interesting. There are several layers in the decision making process that relate to card selection and predicting the opposing player moves, as well as when to prioritize acting first. The slight downside is that as the player count increases, Sakura becomes increasingly chaotic and sticking to a strategy gets harder.

With six players, there will be five movements that you have no influence over, so the outcome of a scoring round can feel a little bit random at times. At four players, there’s a good mix of competitive tension and strategic potential. It’s worth noting that the chaotic feel I refer to here is actually thematically correct. If you imagine several artists shoving and pushing each other to be close (but not too close) a much stronger theme than you might initially think does begin to emerge.

In more or less all circumstances, Sakura lasts for about thirty minutes per game, which feels just right. It’s a relatively deep thinking warm up game, but it is perfect for engaging the brain cells if you intend to move onto a heavy or highly competitive game afterwards. I found that it was better played one or two games at a time, but more often than not, the players found it a positive experience and said that they would play again. 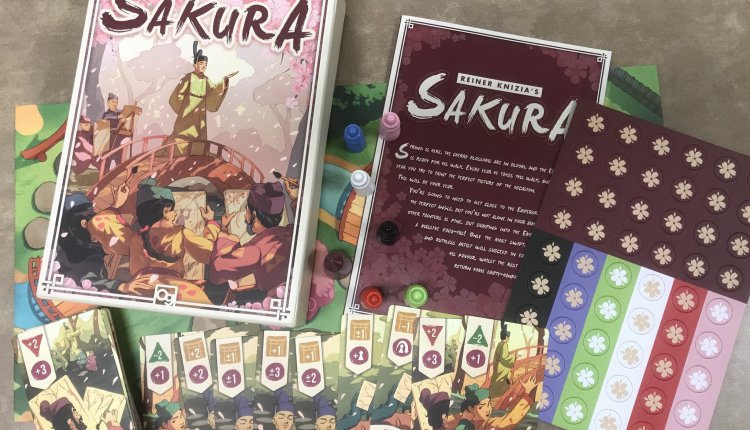 I found Sakura to be surprisingly likable. I don’t tend to get along with lightweight, abstract strategy games, but in Sakura I think the right mix of player-influenced randomness, strong theme and speed combine very nicely. The game can be highly competitive, but there’s no real advantage to experience, so anyone can win. The small box is very pretty on the shelf and it is filled with equally attractive components, making Sakura an attractive proposition for just about anyone.

A copy of Sakura was provided for review purposes. You can find out more information about the game on the website of publisher Osprey Games