Yonder: the Cloud Catch Chronicles is a game you will get lost in both literally and figuratively.

This review was written based on time with the Playstation 4 version.

Okay I admit it, I have a horrible addiction to relaxing open world games. There is something to be said about escaping into other worlds such as Animal Crossing, Stardew Valley or most recently My Time At Portia. It’s probably due to my crippling fear of the real world, but that’s beyond the point. Yonder does things quite differently from all the aforementioned games yet keeps and holds the heart and soul of the genre.

I hadn’t heard of Yonder and it came out of left-field for me, but I am delighted it did. This game has quite a bit to offer and I was completely blown away by that. Now, before we get into details and features, there is something I feel the need to note – Yonder is a bit of a jack of all trades (minus combat), it does everything but never really masters any particular aspect. There are multiple ways to play it though, and your experience may completely differ depending on how you approach the game. 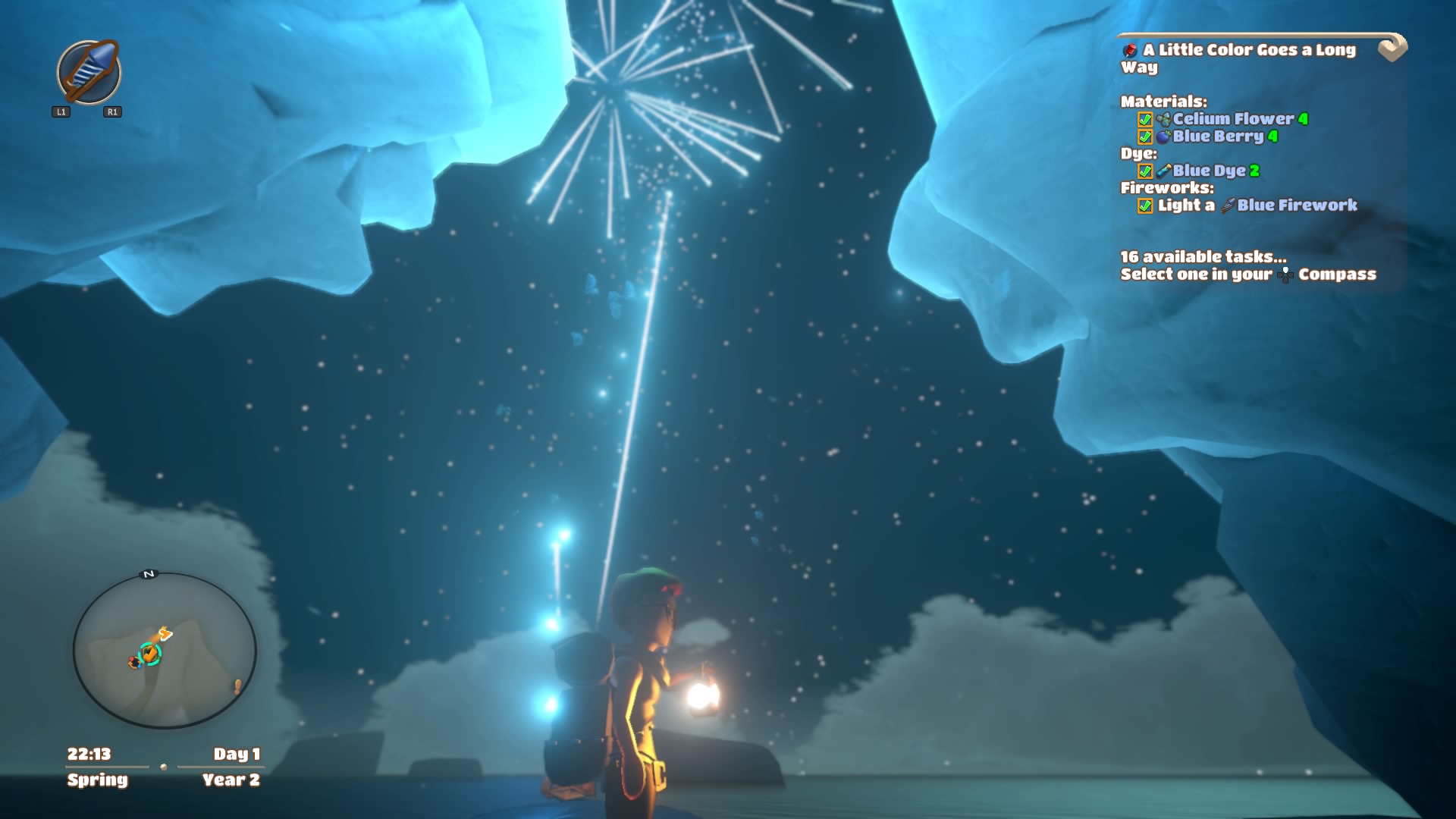 To begin, we should start with the story, which is rather simple. You are on a return voyage to Gemea to find out who you are, and why your family sent you away at an early age. After a heavy storm hits, your ship and its crew are lost. You wake up in a cave and discover you have the ability to speak with Sprites, tiny magical beings who can clear the Murk. The Murk is this foul energy is choking the land and causing all sorts of chaos. It is your destiny to clear the Murk and find its source. Hint: It has something to do with a Cloud Catcher.

The story itself is a rather light aspect to the game. Not to say that it is poorly written or presented but just like everything else in Yonder, it is an aspect you can explore or ignore completely. Yes, Yonder is a game that has a beginning and an end but in a way, that end is the beginning. You spend most of the time exploring the vast continent of Gemea unlocking more aspects to the game. 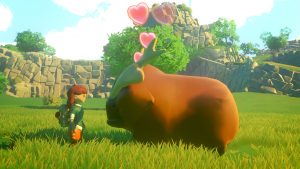 Like most crafting games, you start Yonder with nothing and build yourself up. Yonder does a good job of showing you the ropes though, even handing you a farm early on. If you want to expand on that farm though its going to take quite a bit of work and unlocking Carpentry or Masonry. All of the professions are taught by Guildmasters who are dotted around Yonder’s map. Some of these guildmasters are even part of the main quest line in the game. So by the time you’re done exploring and unlocking all of the crafting professions you have probably beaten the game.

Which sounds odd, you would think that those crafting aspects would help you get to the end, but they really don’t. They are there to enjoy if you want but not necessary. This at first confused me but as the credits roll I realized Yonder wants you to enjoy the game and set your own goals The end of the game is the end of the back story. Your story continues as you decide what to do next. Perhaps you go back to that first farm and make it as productive as possible. Maybe you want to customize your avatar and set about mastering Tailoring. Clear up the rest of Murk you missed, find all the Sprites, unlock the Master profession. You have a dizzying amount of choices in what you do.

When it comes to gameplay the devil is in the details.

Did I mention you can dye your hair? Cat hunting? Did I mention kingdom coins which let you buy rare items in specific shops? Oh yeah and Sage Stones which let you fast travel. Yonder looks and plays very simply but the developer packs in as much as they can into the game. To the point where chances are there is something I am going to miss. That is a good problem to have as a reviewer though and especially good for gamers. 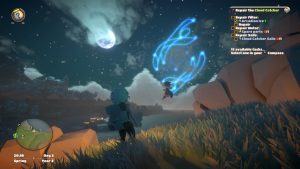 One thing I found particularly interesting is that Yonder has no currency. Aside from Kingdom coins which is for a very specific shop. You barter for everything and its inherent value. It’s four of my Groffle milk for their silk, thread, and meat. The economy also ebbs and flows from town to town. You can find precious metals for cheap in the mountains and trade em for higher value in other towns. Bring too much of one product to one town though and suddenly it has no demand for that product at all. It’s a smart and intuitive system that you need to master if you are going to craft anything in this game.

Most crafting can be done by just collecting from stones, trees, and other resources in the wilds but trading makes it far more easier to accomplish. Why make my own planks when I can just trade for them? There are also some items that you cannot make and require either traveling to a specific region or vendor to acquire. Yonder wants you to be constantly on the move and seeing everything it has to offer. It keeps you involved with the world.

Now of course, no game is perfect. Yonder is missing many of what I like to call quality of life features. These are things that are not big deals but would’ve made the game more easier to digest. You have a storage box and hundreds of items can be stored in it but to craft you have to have the item on your character. There is a serious lack of explanation on what purpose certain items have. Tooltips or item descriptions would’ve made this so much easier. Being able to edit the toolbar would have been nice as well.

None of these things break the game or dissuade me from recommending this game wholeheartedly but they do stack up. Hopefully some of these things can be added or addressed in future updates.

I have only one major gripe with the graphics department. Lights are WAY too intense in this game. I don’t know if it has something to do with my version being on PS4 but any source of light in the game was blinding to the eyes. With no ability to adjust the graphics, sadly this is something I quickly learned to avoid. Additionally I would’ve enjoyed more camera control but that’s a personal preference. 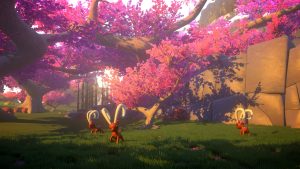 Up until recently I didn’t have much faith in atmospheric agriculture games breaching into 3D. Most of the time good ol’ pixel graphics do the job and are consistently wonderful. While some have dabbled in the 3D area, none have really rocked my world. Unless you count Minecraft but I don’t. Yonder changed my perspective on that and has me hopeful for the future. The graphics reminded me a bit of Dragon Quest Builders but way more detailed and vastly more eye catching.

The best way to describe the graphics of Yonder is that everything is exaggerated. Green is super green, blues are super blue. Not in a way that the saturation feels heavy handed or too much on the eye. This is a very color rich game and it uses the Unity engine to its fullest extent. I walked into a forest with purple leaves and was blown away at how amazing it all looked. The light sending hues of pink and violet that I just couldn’t stop enjoying. Nighttime comes and the constellations grace the sky in a bold fashion

The character models are where things start to feel different. Yonder doesn’t really aim to be super realistic, so the characters are more on the cartoony side. They don’t really stick out from the environment and once you play for a while you hardly notice. The animals in this game were one of my favorite things. From Groffles to my personal favorite the Sprig Pig, there is a wonderful sense of imagination when it came to the animals in this game. To sum up, the game looks great. 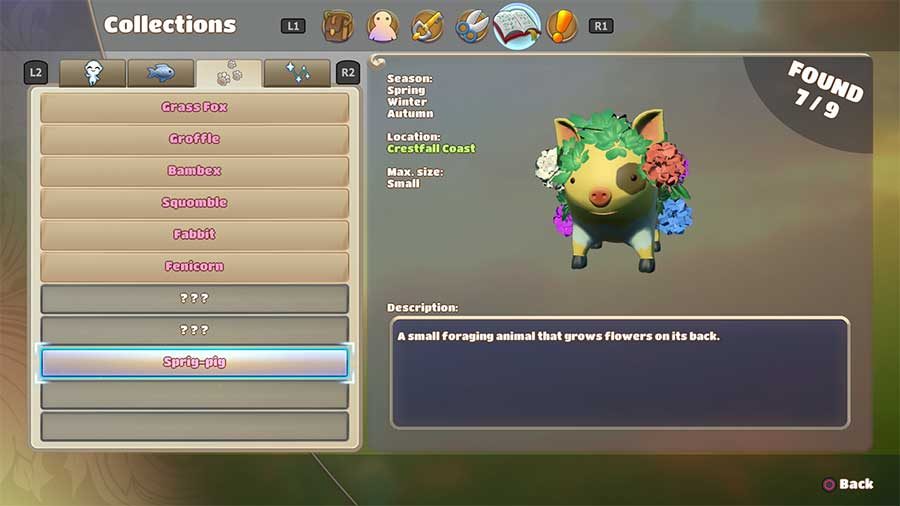 If you are going to have a vibrant world the music needs to match. Thankfully, Yonder’s music is orchestral and wonderful. It’s everything it needs to be when it comes to the music. There wasn’t any particular track that stuck out to me but I was always busy so I may have not noticed. There is no voice work in Yonder so there isn’t much to say about the sounds. Its par for what is needed. Axe chops wood, Pick ax clangs, you get the idea. Voice overs would’ve been nice but I think would’ve been distracting to the game. 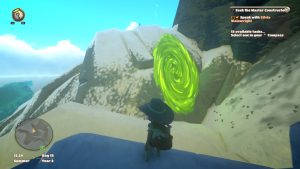 From a replayability standpoint I would say Yonder doesn’t have much. On the other hand the game has longevity in the form of plenty of things for you to max out and hundred percent/achievement hunt. I played the game for a good sixteen hours and finished the story. This still left me with taming all the animals, mastering professions, and much, much more. Yonder does feature achievements across all platforms.

Oh, and I can’t forget to mention the little Easter eggs everywhere. Good luck finding them!

Yonder takes the basic crafting game and makes it a lovely experience.

When it comes to innovation Yonder does draw from obvious sources. You will chop trees, gather rocks, and make highly advanced machinery from that somehow. Despite that, Yonder does everything in its power to make itself unique. The barter system was refreshing and I never got bored of seeing what was around the next corner. Yonder wants you to get lost inside of its world and I had no problem doing that.

Check the game out and be sure to check back to B3 for all your gaming needs!