Nothing’s been the same since the Cows Came Home

Asymmetric, the brains behind Kingdom of Loathing invite you to find your destiny out west in West of Loathing, their newest game available on Steam.

West of Loathing is an an action, adventure, comedy, puzzle RPG. If that seems like a mouthful, you’re right, but it truly is the best description of this game. It has all of those things.

You are a young Beanslinger/Cow Puncher/Snake Oiler who has decided to leave the comfort of home and hearth to venture out west. This is where your story begins, and where it goes from there is honestly up to you. It’s a fairly open world. As you explore, the map opens up to you, and what you choose to do and in which order is left for you to decide. 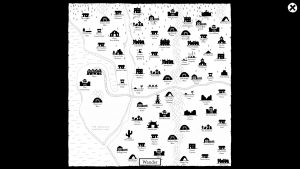 The map is set up in a click and go style. Open your map and choose a destination on it. You also have the option to wander, which is a great way to open up places on the map. As you travel you may encounter random events. Sometimes these are regular battles, but you also may run into people in need of help, a puzzle to solve or a treasure just waiting for you to take it. A hero’s work is rarely done out west and West of Loathing gives you lots to do indeed.

There are choices to be made and puzzles to solve.

In the various towns and locales on the map you will find citizens in need of a little help, shops to get supplies from and puzzles to solve. Like it’s predecessor, West of Loathing is chocked full of puzzles. Whether it be finding the right recipe for pickles, finding hiding bandits or solving the mystery of the El Vibrato pieces, you are going to have to employ your wits.

When you aren’t outfoxin’ the puzzles, there are plenty of times you will have to fight. This is the wild west after all. 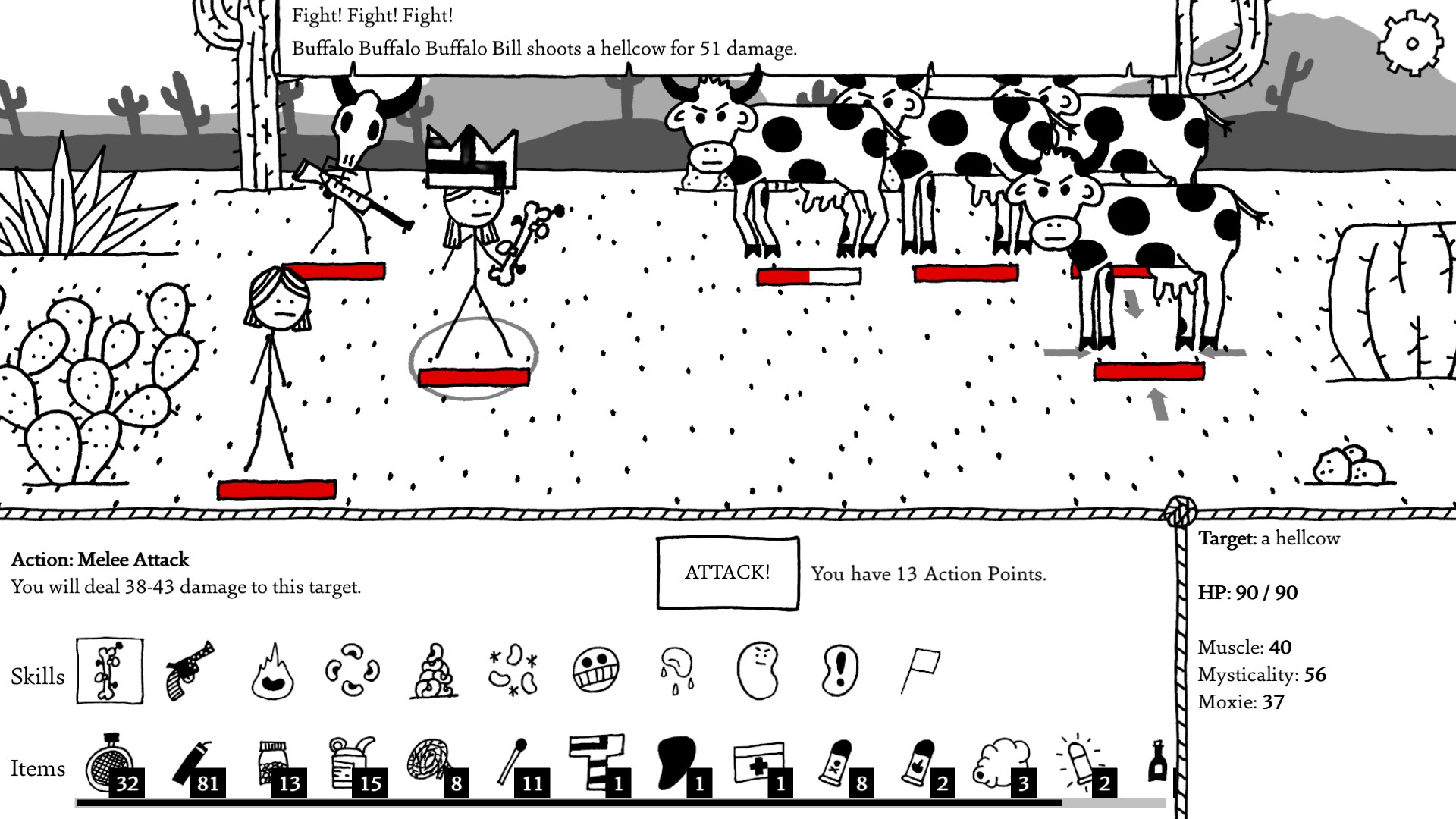 Combat is set in the classic, turn-based style. You have standard attacks and then, depending on what class you choose, you also have special abilities. Beanslingers are magic users, Cow Punchers have special melee attacks and Snake Oilers specialize in guns and poison attacks. You will also have a partner who will help you through battle and you can choose how they attack as well. It is a very straight forward set up and very easy to pick up and master, regardless of your experience with RPG combat.

The controls for this game are also easy to master. It doesn’t offer controller support, but to be honest I didn’t need it. You can use the keyboard for movement/item interaction or you use your mouse as I did. Both work at the same time so you can switch back and forth without even having to open a menu to do it. Everything is extremely user friendly.

The humor is hotter than a hootenanny when you go West of Loathing.

One of the major draws for this title and it’s predecessor is the humor this game provides. There are lots of silly encounters, wink and nod types of jokes and comedy references to enjoy. The writers of this game really put a ton of detail into each character and quest. It may not make everyone giggle as much as I did, but almost anyone can find the charm and humor of this title.

The art of West of Loathing is sweet simplicity. 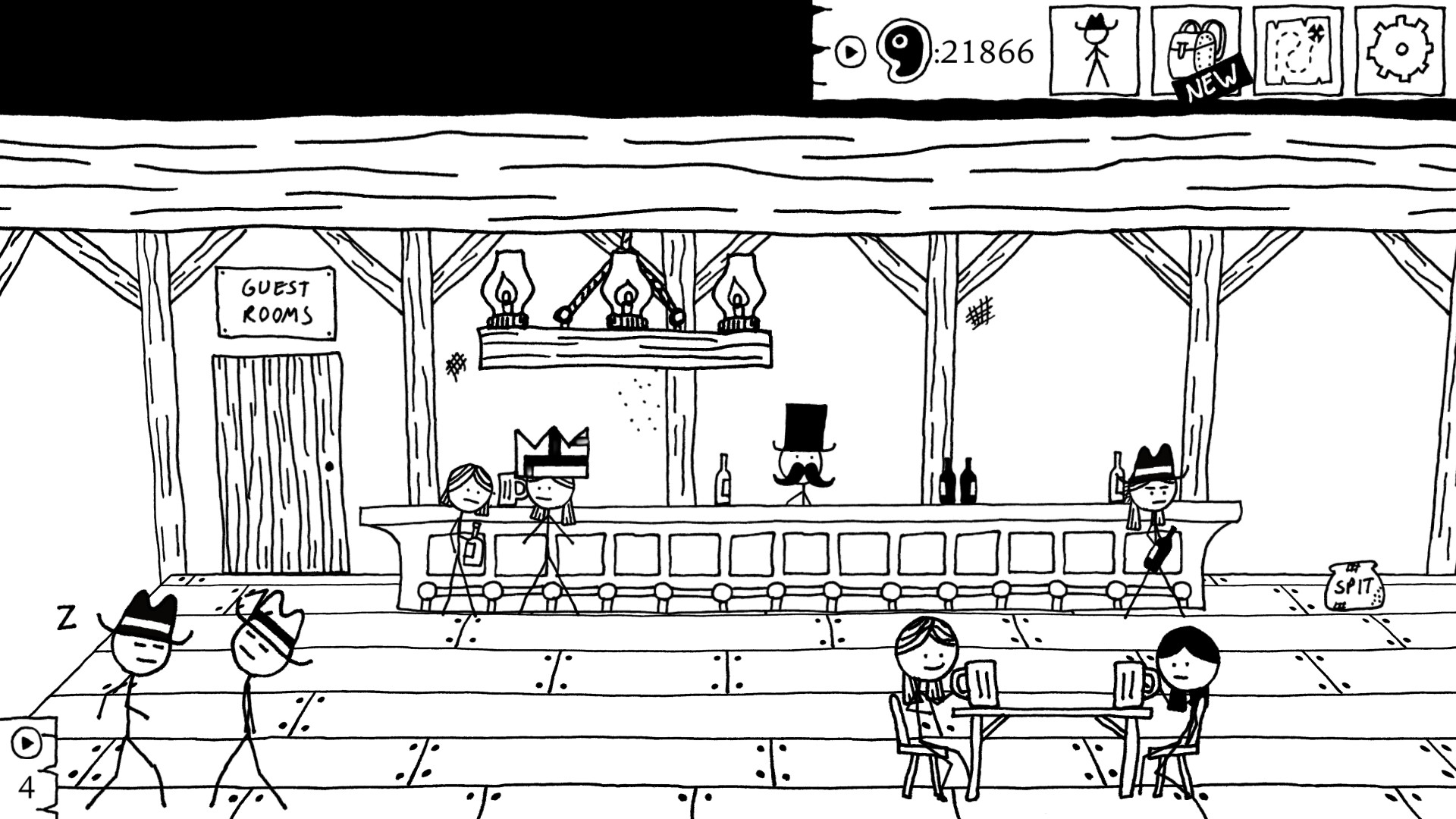 Aesthetically, this game is simple, but it is simple on purpose. Everything is drawn as stick figures. It completely fits the tone of West of Loathing. That’s not to imply that simple means cheaply done. Everything looks seamless. The back grounds and characters have personality and there are tons of details to explore.

The music is quite good. I found it to completely fit the tone and feel of the game and I never got tired of the songs. They do offer a soundtrack download on Steam if you enjoy old-timey western music. The sound effects during battle did become a little repetitive, but they give you the option to turn off the combat sounds, which I did end up doing. They aren’t bad sound effects, but you will do a LOT of fighting.

When it comes to replay value, West of Loathing has it in spades! I have played 26 hours at the moment and I have yet to get even half of the achievements. It’s not that they are difficult achievements either, there is just that much to do. Aside from achievements, there are also Steam cards for you collectors like me.

If you are looking for a game with a silly sense of humor and hours of enjoyment to be had you can certainly bet on this game.