Victory and Glory: Napoleon is, as one might imagine, a strategy title which addresses the Napoleonic Wars, covering the period from 1800 – 1818. While it has been marketed previously as a Grand Strategy title, it’s certainly more of a traditional, board-game style strategy game – think the perfection and balance of RISK massively expanded upon. 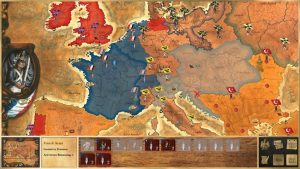 For those of you not overly familiar with the exploits of The Little Emperor, or of the state of the world during the time frame of the game, don’t let that hold you back.  Everything is thankfully extremely well explained, and the only things which actually reference historical events are the cards that the game uses to drive events forward. Even the various empires and minor nations of the world could effectively be renamed entirely with minimal effect on the processes of the game – this is ultimately an excellent board game that happens to take place during a critical military era of humanity’s history.

In the board game that it shares its namesake with the game can be played by multiple players – but, critically, it requires two in order to play out – one player plays as France, and the other ol’ Blighty, or Albion – as the game romantically puts it. The PC version, however, is simply a single player game and the only nation you can control, from any of the six included start points, is Napoleonic France. That’s not to say that this is in any way hampering on the game, there’s a lot of content to play with and France is definitely the more dynamic and challenging of the factions in the game. 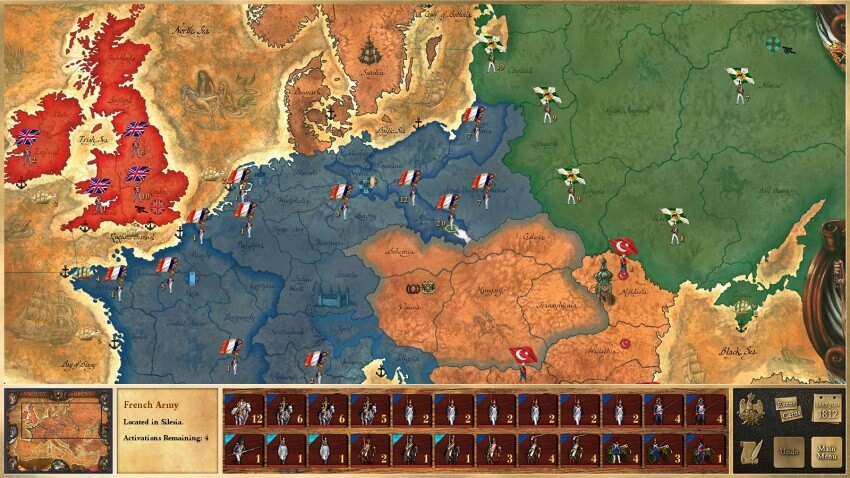 Gameplay takes place over several main screens; a strategic map of Europe-and-some (Russia, The Ottoman & Egypt make obvious appearances) from which you oversee your troop movement, and the growth or recession of your empire; and the battle screens, wherein the fate of your troops and ships are decided.

The game campaign screen is wonderfully drawn, with portraits for each of the major nations dominating the frame of the board, surrounding an eye-pleasing political map of the combatants. Continuing this pattern there are just over 100 event cards in the game – the previously mentioned driving force of the game – which have all had major care put into their artwork. 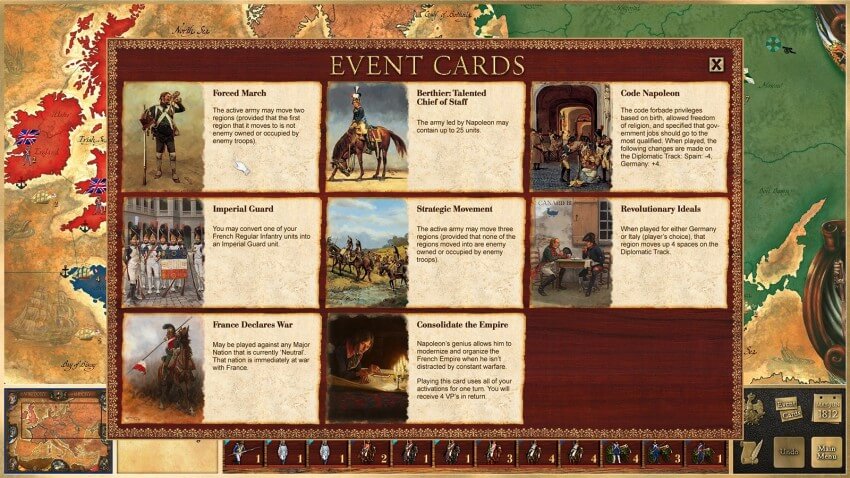 I say the cards are a driving force. Normal turn structure sees every sixth turn as a recruitment phase for the French, with the other turns allowing you several movements for your armies across the campaign map. If you engage a foe, then you engage a foe and go to the battle screen, if you don’t and it’s a hostile zone then you neutralise it, briefly swaying it to your faction. Between each of your turns, Albion and the major nations take their moves in a similar fashion. It’s all pretty standard fare – there is some diplomacy, in leaning influence onto people to keep them passive-or to stir them into an anti-French coalition in the case of the English. But, stripped to its basic level, sans cards, that is the strategic layer of the game.

Cards completely change all of that. I would dare say they are as important to the game as the combat itself. Cards are doled out at random, and are absolutely massive game changers – whether they are allowing you to recruit mid-year (you can only normally recruit in one turn of the year – a turn is two months), pool new generals (troops won’t move without them), or manipulate the world’s state by triggering historical events – for instance buying off a rival into peace with an aptly timed marriage, or even stirring up the Irish to give England another target to focus on. The cards also allow you to completely engulf minor nations into the folds of the Empire, meaning you won’t spend as long marching forces backwards and forwards in the name of recapturing land. 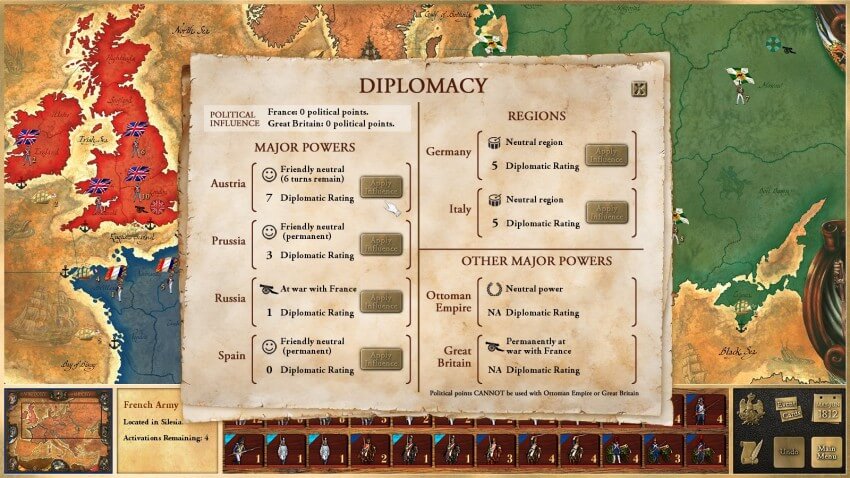 It’s not just France with the cards, of course, Albion also has its own deck – and it’s dangerously effective at deploying them. As a matter of fact, the AI, in general, is challenging even on the easiest of the three difficulty settings. As an entity, Albion’s entire existence and scoring are based around drawing more nations into a solid defensive coalition against expansionist France – you – and it is relentless.

Manoeuvres on the board are a simple affair, a click to select a unit and a click to move it – this applies to both ships and soldiers. The map displays the units in each stack in a visible enough way, although for obvious reasons you can’t see the enemy force composition until you engage in combat. Any quantity of your cards can be played at any point in your turn, as long as the rules on the card allow it. This means that you can completely change the face of Europe within a turn, playing 5-6 cards to secure alliances and capture small nations, deploying bonus troops and forming up ranks to head out for combat. 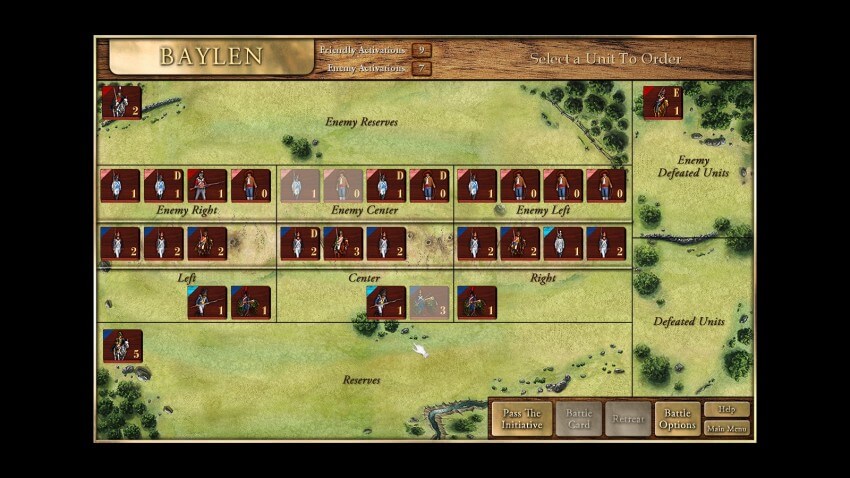 I’ve played about 11/12 games of Victory And Glory: Napoleon now, but at no point have I felt matched up against enemy numbers when it comes to troops. While certain troops are more effective in combat, and Napoleon’s starting army is certainly composed of some of the higher levelled ones – there’s just so many enemies on the board, and ready to engage you, in most of the starting campaigns that I can’t bring myself to trying to combat enemies on multiple fronts. In fact, I would argue that cold, hard, fast aggression is required to form up groups to smash and shatter the larger armies of the nations you are at war of immediately. If you don’t shatter their larger stacks then their units – which are certainly more plentiful than yours, will quickly kill off any of your smaller garrisons leaving a gaping gateway to Paris.

Of course, this does play in well to the fact this is a game – enemies do not remain conquered and defeated, however keeping them in check by smashing their larger stacks of forces keeps them out of the mainstay of the fighting. 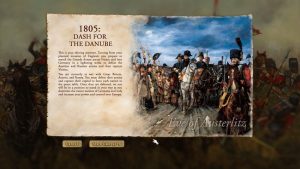 As a matter of fact, the game manages to turn you into a constant underdog, with each battle being a hard push and a gamble. If you head out to neutralise the Russians, or Ottoman Empire, with your forces then you leave France’s Southern Border exposed to rebellious Spain. The risk is, of course, that if you don’t deactivate these larger nations then when distant England gets the right cards and re militarises them against yourself you’ll be facing a massive coalition of combined nations, and then that’s it, good night Bonaparte.

Outside of the strategic layer, there are three different types of combat: naval, close, and grand. Naval combat is extremely one-sided, massively in the favour of the British who dominated the oceans at that time. And with no event cards, and the ‘Generals’ required to lead land forces not having an equivalent in admirals there’s no way to balance the oceanic-battlefields other than sheer luck, or somehow managing to split the enemy forces – which they are too smart to fall for. 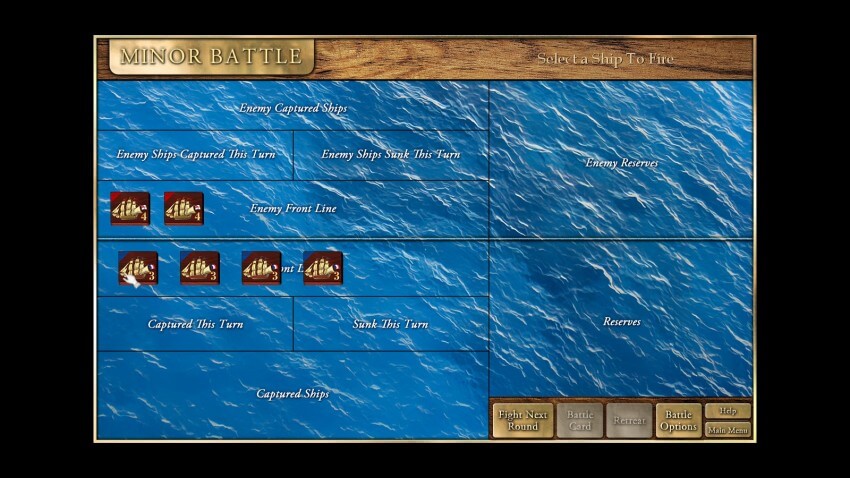 While not a flaw, something that I hope will be changed within the game is how battle results are displayed. Currently, the game rolls die to decide the odds of success in sinking/eliminating, distracting, or routing troops and ships – these die results are not shown in any way. There’s a couple of reasons I feel the dice roll should be shown – for one you can get a rough idea of how narrowly you missed an opportunity, and also, it would allow you to learn about the effectiveness of troops in-game, by seeing the modifiers between them in action.

The other two types of combat are ground based, with smaller skirmishes being resolved on a screen similar to naval combat – your front line troops all stored in one area wherein they can face the opposition, and all other troops serving as reserves. The player and AI take turns in attacking the opposition, with each side having a certain amount of manoeuvres/attacks they can perform in their turn dependent on the skill/levels of the Generals they have with them. As you might image Napoleon is the best general in the game, and so if you’re not using him to push forward against bigger enemy stacks you are wasting him – but, that’s where the other type of combat comes into play.

The real joy of the combat system comes into play with the multiple-flank skirmishes of the larger land battles. This combat system is wonderful, with three flanks facing each other, forward lines and rear support all having their own places on the battlefield. Victory is accomplished by breaching a flank and thus pushing around the front lines – it forces you to think carefully about your placement, as if you concentrate on one flank too hard you risk leaving yourself exposed. 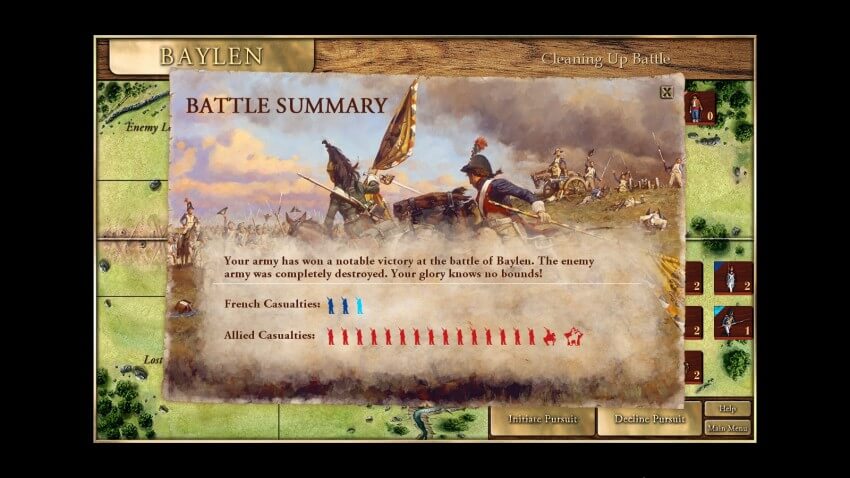 It’s a brilliant system, although maybe not one I would have expected in a Napoleonic-set title, of the nations of the world that he came up against few of them employed tactics like this – his perseverance and battlefield cunning were really what won him so many battles, that and the undying loyalty of the common man. That said, those two factors are briefly touched upon on using cards – and the battle system is well balanced as it is… it would be a great challenge to properly emulate the many conflicts of those eras.

While the board game, or even some screenshots, might seem like the game is meant to be a massive stretching campaign over the many combatants of Europe, it isn’t. It is at its most concentrated a battle by France and Albion over the hearts of the continent. That is its strength, but also its weakness. For a game to accurately depict the extent of the Napoleonic wars it must feature a military tactics system, allowing forces to defeat overwhelming numbers using flanks and positioning, as well as a morale, leadership, and officer communication system. That’s all a hard ask – but the combat of Victory and Glory: Napoleon does manage to at least put you in a position where you can break enemy forces with tactics – should the numbers lean in your favour. If you combine that system with the cards, the tough AI, and the victory conditions it tallies up to a game with a massive amount of content on offer.

The future of the game is bright, with quick-play battles [“Marengo, Austerlitz, Eylau, Friedland, Wagram, Borodino, Luetzen, Bautzen, Dresden and Waterloo”] coming to the game soon which should bring the novices of the battle system, like me, up to scratch. Hopefully, we’ll also see a chance to play as England in the near future – I like the idea of playing the puppeteer who orchestrates and only strikes when the time is right.