Review | Tigers on the Hunt

Tigers on the Hunt is a maddeningly in-depth title that features a staggering, scary amount of historical accuracy and strategic options.

Let’s get things clear before I start up this review in full. Tigers on the Hunt is extremely in-depth, its controls are simple, but its UI is far from modern. It is a game which, if you want to play it, if you want to learn how to play and master it, then you will have nigh on endless amounts of fun – if you are looking at something that is pick-up-and-play, instantly accessible gaming, then this is not for you. This is, at its purest, a tribute to the deep Advanced Squad Leader system, and it delivers the content and scale of that in full, while also adding in AI, several difficulty modes, automated dice rolls and a few other features. 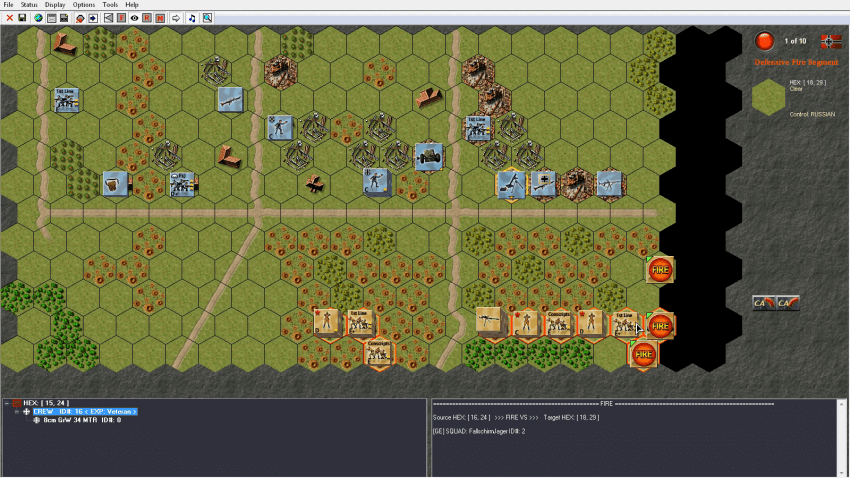 Playing the game set me up with three issues: first I had no experience with the ASL systems, and aside from a hearing a few friends proclaiming it was the greatest achievement of wargaming of all time I have never even really heard it mentioned; Secondly my knowledge of the weapons, vehicles, and battles of WWII are neophyte compared to the majority of veterans who frequent the tactics genre, and ASL; Finally, my history of tactical and strategy games has been one of tool-tips, pop-ups, and masses of information.

In time, after watching the five tutorial videos available from the game’s splash-screen, I started to understand the turn structure, how to interact with the game, and the different movement and fire types. I’d recommend the tutorials to all players, even those experienced with ASL, as even though the turn structure (16 flips of control split across the two players) will be familiar, the actual way that you interact with the game and you troops takes some getting used to.

It’s an old, early 90’s style UI that displays the game, visual filters lining the top of the screen, while maneuvers and certain interactions are available from the column on the right of the screen. What I completely missed when I foolishly tried the game without watching the tutorials was how you interact with specific units – this is done by selecting a hex, and then using what looks like an information screen down the bottom of the screen, to select the troops you want to use from that hex. It’s strange control and display quirks like this that give the game a bar for entry – although once you’ve learnt them you are absolutely grand. 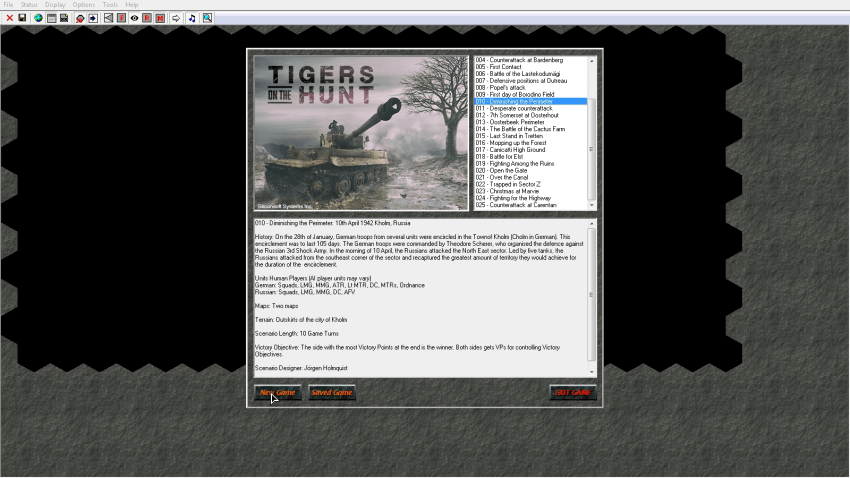 One thing that a tutorial cannot teach, however, is the statistics and ranges of the units in the game. A little bit more historical knowledge would probably have been a major boon for me, although for the most part you can assume that the heavier duty tanks would suffer mobility issues verses the nippier light tanks. Outside of possibly requiring this historical data though everything else is extra intuitive, you can open a menu to see whether trees are full of fruit, and fields are full of crops – if this is the case then they will be harder to traverse – line of sight is also clearly visible due to the art design, and clear hexagonal guidelines.

That’s the thing, the artwork might be simplistic, and the pieces may not change facing as to display which way they are aligned, but it all gives off a feeling of advanced wargames, each hex feels as though it’s been painted on, and there’s a lot of options for arranging buildings, ruins, and roads that mean that even the smaller maps feel unique and deliberate.

A small scenario map is just that, and can be crossed by even the slowest member of your squad on normal speed within 3 turns – as a rough guide most of these are about 7 turns long. Play is dictated by capture points, with one team defending, and another attempting to push forward, capture, and hold the positions until the battle closes up. This was, for me, about 30 minutes of extremely tense, nail-biting tactics. Of course, it’s not just the tactical positioning and timing that come into play – there’s a degree of luck left to the die rolls which decide if your radio fails, your motors seize, or other mechanical failures befall you. 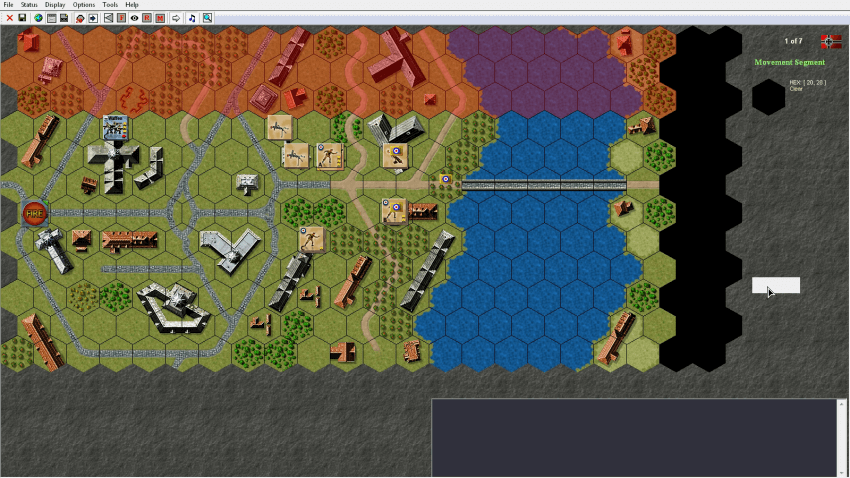 It’s these little nods that keep the game different as you replay the scenarios.  While you may get better at learning the mechanics you must always expect the unexpected, you can’t be too reliant on back-up, or support from a reuniting charge, because a single rally, or jammed gun has no doubt changed the fate of tens of thousands of soldiers over the last century in the same way that it does in the game for yourself. Combine this with the fact that, if you are not hotseating with another human and instead face the AI, its units are changed up on each scenario generation – meaning like in real combat, assumptions about the enemy numbers and positions can spell death for your troops. The AI also comes in a variety of flavours, with the four difficulties defining which two sides of the conflict take a die roll to see if they successfully take command of their unit that time (blame those pesky radios).These elements are critical, and hard felt, in the smaller maps for sure. Now times them by twelve and you’re imagining a fraction of the variety that can be delivered over the largest maps – as a rough guide, a hex is 40m across, and the largest maps can be 3.8km x 1.6km – which can include around 900 units in play over 500 turns (that’s 40’000 phases).  That’s an absolutely overwhelming scale, one that anyone who enjoys playing a tactical mastermind can surely enjoy.

Those 900 units wouldn’t be all clones of one another either, there’s over 300 different force tokens available across the four factions in the game – American, British, German, and Russian. These are split over support weapons, ordnance, infantry, and vehicles – there’s also leaders mixed in there, who maintain the morale of the troops, useful when chaos is going on all around, and the troops start to baulk and break. 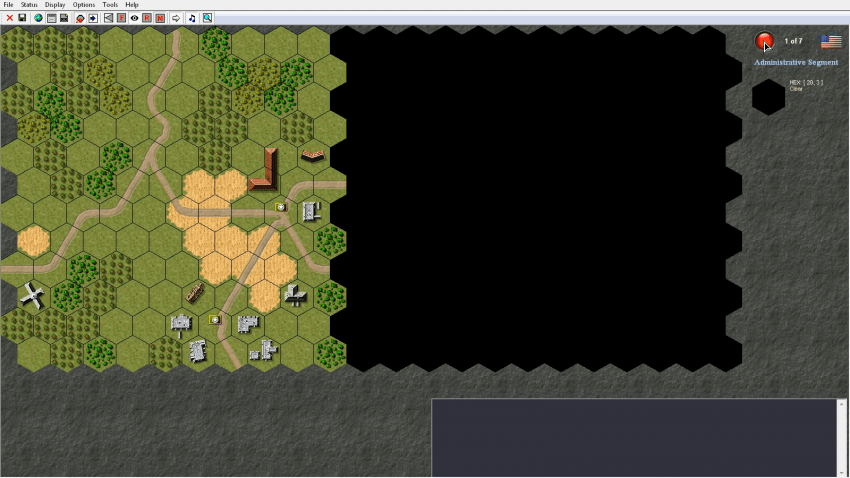 The game comes with an easy to use editor – one that features a simple ‘paint’ terrain design that allows players to quickly sketch up battles from anywhere in the European theatre. It’s been a success in that department, as there’s already a decent amount of mods and extra content already being showcased over on the [Matrix Games blog].

The solo developer has been working on this title for ten years, and has managed to make a game where each unit feels different, and every tile on the battlefield feels critical to the mission at hand. He’s also built a game that includes vehicle options to rotate the angling of the vehicle and turret individually – and a game which allows you to select which of the unit you are attacking with’s weapons you’ll be using on your chosen foe.

While each unit may indeed be different there’s no real listing of how each unit operates, how far they can move, if they are more lethal in close combat, if they can withstand certain damage types and thresholds. This is what I referred to earlier regarding historical accuracy, and my lack of knowledge on the equipment of the time. I appreciate that the Tiger was a heavy tank, I know that the Panzer MK III was a medium tank, however how that translates to the battlefield I’m unsure – and ultimately I remain unsure, as there are no tooltips or even icons denoting the range or damage of the vehicles.

I was actually a little bit annoyed by the above at first, but I decided that there must have been a reason for this and continued playing. I’ll confess, that’s why this review isn’t timely at all, and it’s hindered the work I was planning to do on the Panzer Corps: Soviet Corps DLC. 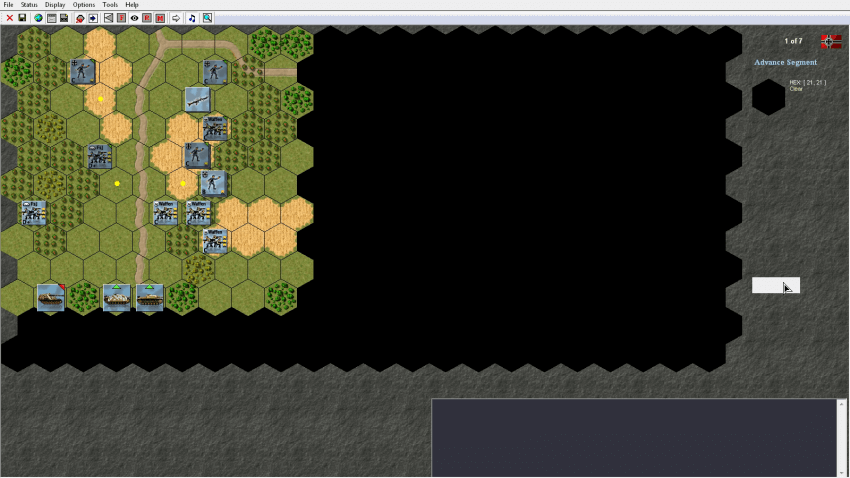 But, after a lot of play, it became clear that it was the correct decision. By hiding the statistics on each of the units in the game combat becomes much more realistic – if an infantry unit was confronted with a large tank it would take to cover before even considering assaulting the vehicle, they wouldn’t move diagonally by 5 foot and then fire at an already weakened component because they know it only has 4hp left. Similarly if a small tank was cornered by two larger vehicles, it would strike what it perceived to be the weaker target – in a conventional game that barricades us with stats we may well target the other vehicle for a higher chance to hit, or we may even surrender the vehicle all together knowing it’s damage would be insufficient.

Imagine <tangent incoming> if titles like XCOM 2 had their statistics masked, from health through to hit chance. People would play the game completely differently. Imagine if it didn’t pop up ‘critical’ when you land that hit, and didn’t display the timer. I’d quite like to play that game – it would feel unfair, but to be honest, life is unfair, and combat is always a risk. It would become a game of tactical awareness, common sense, and controlled caution.

I’d be a fool to argue that the game needs to be prettier and more rounded, ultimately it’s the content of this game that makes the experience. It is a system that allows a ridiculous level of tactics, and it’s a title made by just one developer, one who clearly had a lot of passion for the Advanced Squad Leader system and who was desperate to make a game which could deliver that depth, but also feature a smart AI – so you don’t need to haul boxes of easily-disturbed tokens across town in order to have a game. I’m far from a master at this, I still find the ctrl+click selections awkward, but I’m really enjoying the depth of the game. If you’ve got time and drive to give to this game then I suggest you go for it, with both of those, the scenario maker and the modding community, there’s a nigh on endless amount of realistic simulation to be had.