Much like the classic Sid Meier video game that it is unofficially linked to (but clearly emulates,) Through the Ages: a New Story of Civilization is initially quite a daunting beast to get to grips with.

It must do something well though, because, having evolved throughout several cosmetic iterations, this newest instalment is currently ranked as the second best board game overall on BoardGameGeek. The previous, original version is still eighteenth, and at one point in time both games occupied top ten spots simultaneously. The new version has some rules amendments and a much higher overall quality, but it is effectively the same game.

The manual is dense, and the number of individual board pieces, cards and resource counters gave me pause. Thankfully, there is also a quick start guide that helps accelerate progress, and by skipping straight to the back of it (to the handy storage guide) I was able to quickly understand how to divide the cards for each age and separate out those that are not needed in two and three player games.

With that done, I began to follow the basic instructions. Setting up each player board is a straightforward matter of placing counters in four different colours onto the appropriate spaces. A number of cards are then drawn from the Age of Antiquity deck and placed onto the central board, with the rest being placed alongside. By this point, the game was already beginning to look a lot more logical and straightforward, and the quick start guide walks players through a couple of simplified turns. 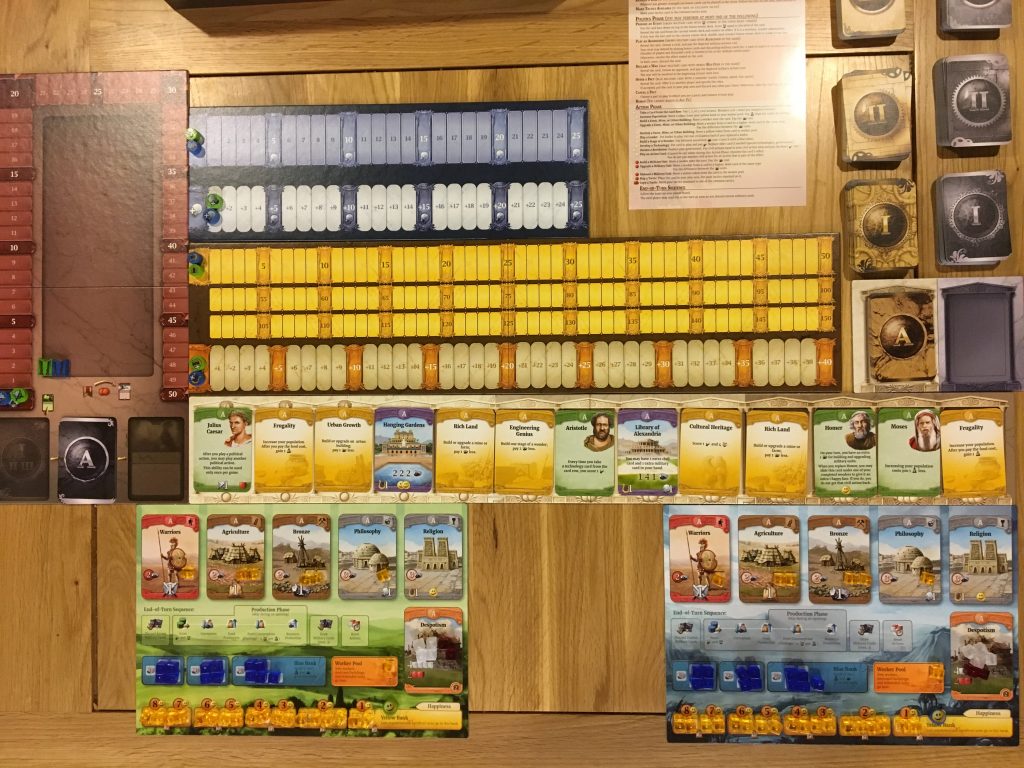 Explaining the way Through the Ages works in detail would probably require a full manual, and indeed, a quick start guide, so I’ll try to describe it more briefly at a high level. Players take it in turns to complete a series of civil and military actions, the number of which is determined by their government type and any cards they have activated that offer a bonus. Using these actions, players can draw cards from the timeline, play cards they hold such as leaders, wonders and technologies and take actions that affect their production such as upgrading buildings.

Military and politics actions in Through the Ages are fairly hard to explain briefly. Basically, a Politics Phase occurs during every turn after the first, and during that phase, players may play event, aggression, war and pact cards from their hand of military cards by spending military points. These cards are obtained from the military deck at the end of each turn, depending on remaining military actions. This balance of deciding when to use cards and when to draw them is quite important in Through the Ages, and it works a bit like the idea of one army over stretching itself in combat.

Each of the card types world differently, with events being added to an active deck on the tactics board that can be drawn from later, leading to wars of colonization or other, similarly interesting situations. Wars (unlike aggressions, which resolve immediately) are resolved at the beginning of the next turn, with the winner receiving bonuses as specified. Pacts have the opposite effect, with both players receive a benefit as specified, should an agreement to unite be reached. War is expensive but valuable in Through the Ages, whilst pacts won’t usually yield the return that you would hope for, and they strengthen your rivals. Deciding when to fight and when not to is a critical factor in succeeding at Through the Ages. 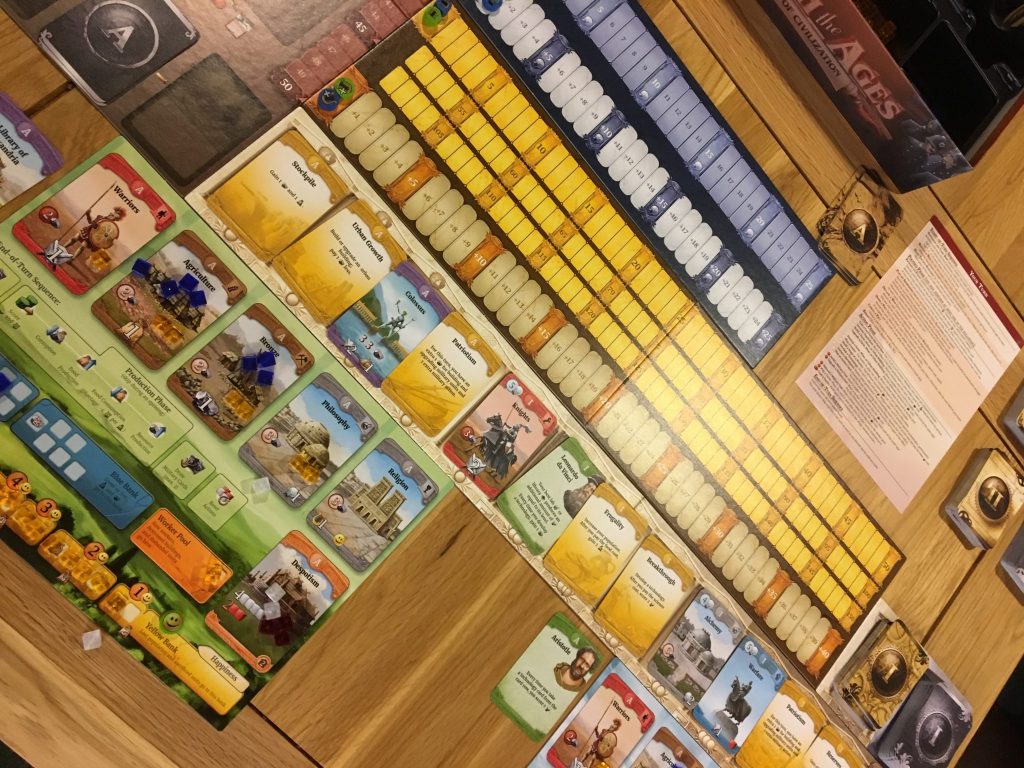 At the end of each turn, a number of cards (determined by player count) leave the edge of the board, and all remaining cards sweep down to fill any gaps. New cards are then drawn from the current age deck. With the exception of the Age of Antiquity (which ends after two full turns) each age ends when the final card is drawn, and the subsequent age then begins. As the timeline advances, so too does the technology available to players, and in turn production of science, culture, food and resources is hastened.

Culture is ultimately what wins the game, with the player that has amassed most at the end of the game being declared the winner. Games of Through the Ages can last three or four hours at least, and a four player game can legitimately take five hours. I honestly have no idea how the advertised play time of year hours can be achieved, as even with only two players, my games commonly took as long as three. I can understand the fanatical support on BGG though, because playing Through the Ages is totally worth your time.

Most of the gameplay is focussed – unsurprisingly – on developing your fledging civilization. The starting position for every player is symmetrical, and a limitation on the number of available civil actions (based on player order) in the first turn ensures a fair start for everyone. Through the Ages is a game in which you can fall behind quickly and without any possibility of clawing your way back, so it’s essential to invest four or five turns investing knowledge into new opponents instead of trouncing them. 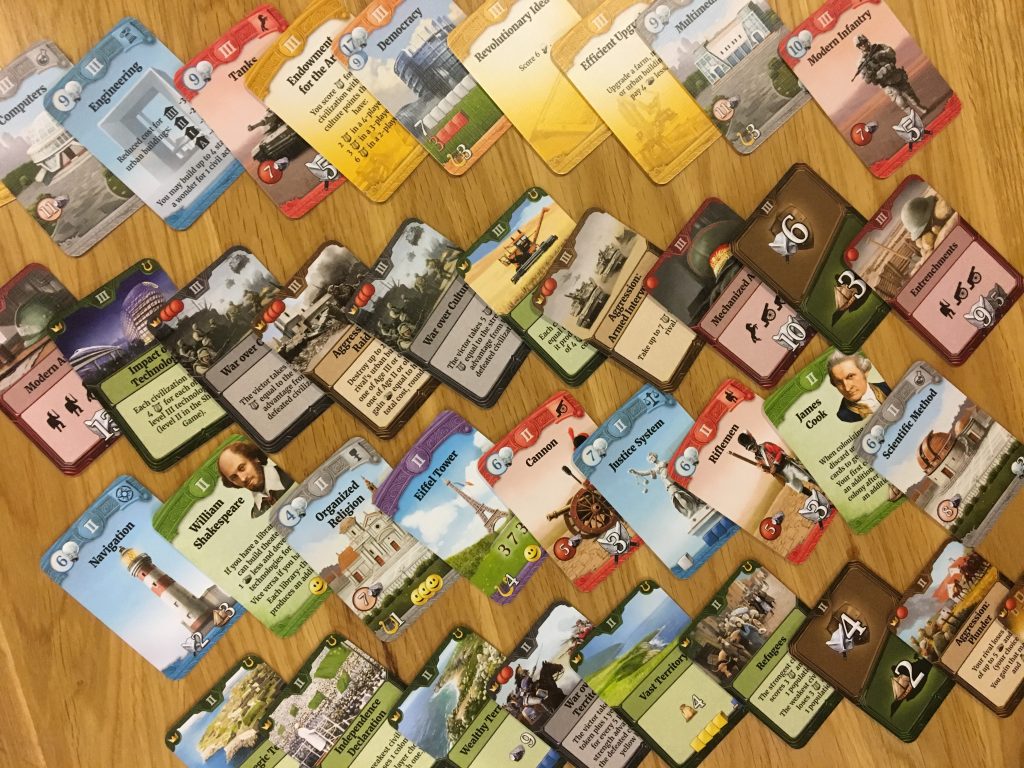 Drawing cards from the left of the timeline costs just one civil action, whilst those further right will cost two or three. Taking the right cards at the right time is important. Developing your production is important. Drafting the right leader to support your chosen strategy is crucial, and picking up a choice wonder, technology or action is also useful. Knowing when to produce and when to invest is another factor, as overproduction leads to wastage, whilst failure to develop happiness can result in revolution. Failure to develop a sufficient military can cost you dearly against an aggressive opponent.

All of these subtle movements in tokens and cards happen on the player card, and can have big effects on the following turns and how your civilization pans out. In many ways, the cards represent snapshots of current civilisation health and progress, even though victory points are tracked elsewhere on a separate board. Matches between experienced foes are close fought, fraught with danger and brimming with strategy.

There are many, many moments of both direct and indirect conflict in Through the Ages, including the use of the military system and political actions, and also because there will always be some level of contention for the most sought after cards on the timeline. This is not a game to play if you feel uncomfortable about seizing upon a weakness in your opponents guard, and having a significantly weaker military strength can be a fairly punitive situation to find yourself in. 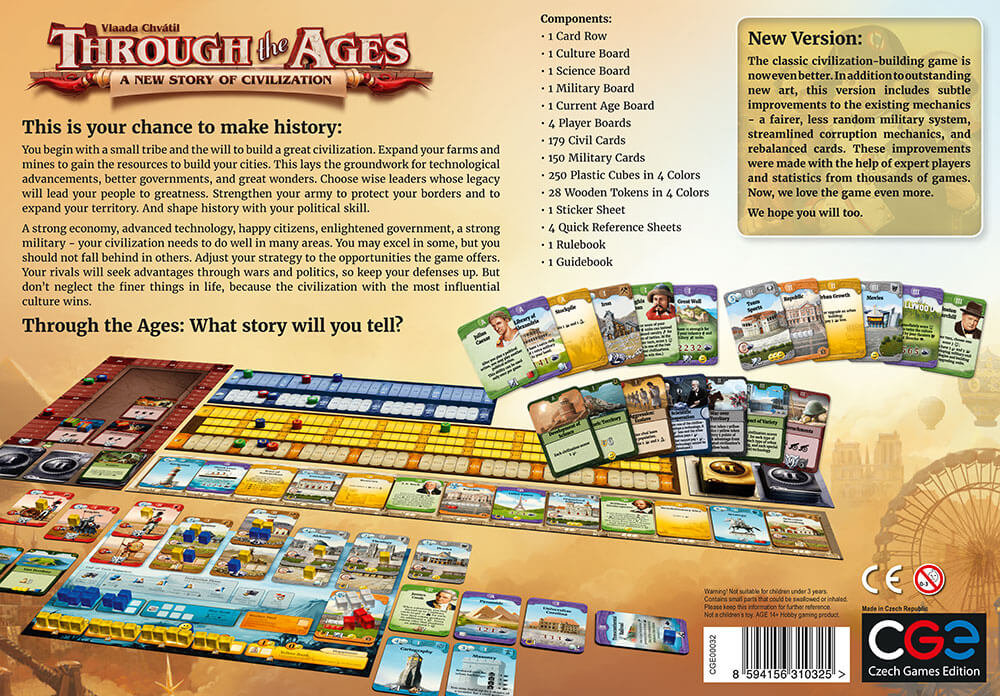 Overall quality in Through the Ages is high, without feeling as if it breaks new ground. The cards are well made and nicely drawn, with lots of colour and detail. The box and insert are really well done, and there are separate trenches for cards of each age, including separation within the trenches for civil, military and three or four player cards. The manuals are both exceptionally detailed and very well written, with the quick start guide being very useful, alongside some of the very good tutorial videos already available. If I was nitpicking, which I suppose I am, then I would probably have liked to see indentation on the player boards to prevent resource cubes from moving, although that is a relatively new addition to certain games only.

Whilst I don’t rate Through the Ages quite as highly as the BGG community, I still think it is exceptional. Each time I played, I felt as if I was really building something as my civilization came together. Not only that, but each game is materially different due to which cards are drawn, when they are drawn, and where on the timeline they end up. Sometimes, war and politics become a major focus, whilst in other games peaceful development and mutually agreeable trade seems more practical. It’s really, really interesting to see how new players approach the game, and whilst there is a downside to falling behind early, Through the Ages does reward players for genuine long term thinking. It’s cheap, it’s well made, and if you’re looking for something deep and engaging these winter months, then Through the Ages might be the game for you.

A copy of Through the Ages: A New Story of Civilisation was provided for review purposes and can be purchased via 365 Games or through one of the shops found in this handy Store Locator.