Syberia 3 is the long-awaited third instalment in the story of Kate Walker, a lawyer-turned-adventurer with a steadfast moral compass and a knack for getting involved in dangerous situations.  This time, Kate must help the Youkol people overcome their enemies in order to fulfil an important tradition against all odds; and, by doing so, repay them for saving her life.

You wake up in a psychiatric ward after being rescued from certain death. Your bed is next to a small tribal man who has lost a leg. You soon learn this man, Kurk, is the guide of the Youkol tribe who are embarking on a traditional migration ritual along with their trusty snow ostriches. However, they’ve come into a lot of trouble, and not all of it seems to be coincidental.

As you explore the facility, you start to realise that, once you’re there, not many get to leave. You discover that the authorities are being swayed by the sinister Dr Olga Efimova who seems hell-bent on keeping you where you are and getting rid of the Youkols. You must find a way to continue your own journey, as well as facilitate that of the Youkol tribe, whilst overcoming those who are plotting against you and avoiding your own past…but first, you need to find a way out of the asylum, and it’s not going to be easy.

This is the first Syberia game I have played and if I were in any doubt of my name it wouldn’t be for long, as it seems every line of dialogue with any character would fill me in – after the 50th ‘Kate Walker’ I began to hate her name, as well as the fact it happens to coincide with my own.

I was pleasantly surprised to find that, although Kate’s story continues on from both the first and second games, this was not a barrier to my experience. There are various references to previous characters – in fact this game reintroduces some of them – but they are explained well enough for a newbie to the series to grasp without flogging a dead horse for veteran players. 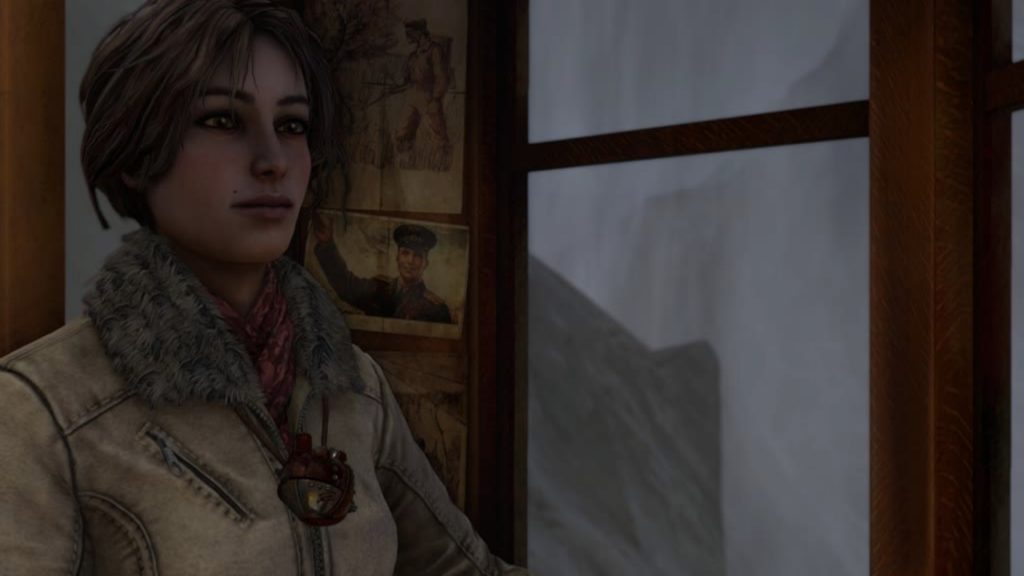 The games in the Syberia series are third-person, traditionally mouse-driven, puzzle-based adventure games, so it was surprising that this time a controller is the recommended way to play; especially as it seems to reduce granular control over Kate’s movement. For example, it becomes a fairly cumbersome task to turn around (as Kate seems to prefer long drawn out circles to swift direction changes), scenery appears to have magnetic qualities and navigating stairs is a game of finding the exact pixel that will facilitate climbing.

Overall, the controls are shaky but manageable; the options glitch between numbers and x-box style lettered buttons, and when the camera changes angle (as it is wont to do moving between sections of the environment) you’re often then walking in completely the wrong direction. However, the ability to be able to run is a much welcomed one as there is a fair amount of travelling around.

The inventory system is accessed using the bumpers which is fairly intuitive, with usable items and reference-based literature being separated into two sections, again toggled using the bumpers. You are also able to inspect any item in your inventory for points of interest which is a useful addition for looking at things close-up and discovering hints for solving puzzles.

Although a pad is suggested, you are still able to play with keyboard and mouse and occasionally I needed to switch back to this method in order to get round some glitchy pad-based issues.

It took me a while to actually be able to play the game as the initial download was by no means small. After initial installation, each time I booted Steam to play, it would require another, not unsubstantial, update to be downloaded. Syberia 3 has a long and arduous release history, first being announced in 2009, but due to a number of issues with publishers and negotiations with the developer, eventually being released in April this year.

Despite a  lengthy development process, the game has been riddled with issues and has undergone various large patches since release to try to fix them.  Unfortunately, the experience still falls a long way short of smooth; within the first hour of playing I had encountered  dialogue skips, large pauses when the visuals transition and NPCs getting stuck on each other. One glance at the bug reports on Steam shows that these are still coming in thick and fast; however, I’m not going to jump on the bandwagon of reporting this game’s faults, as you can read those reviews in abundance.

The environments you explore throughout the game are nicely varied, starting with the psychiatric hospital – a creepy, Cold War era-esque ward, and progressing through various camps, towns and other settlements as you journey with the Youkols towards their final stop. The artwork is impressive, both in terms of the surroundings and the characters you encounter; speech animation is a little jerky but the environments look rich and detailed.

Unfortunately this means that about a third of the play time is loading screens (this is not an exaggeration) particularly in later sections of the game. With lengthy loading screens when you first enter a scene, and then each time you travel between rooms or areas within it, this is a major annoyance in a game where going back and forth all the time is crucial to puzzle solving.

The music fits in well with each area and the score does well at reflecting the general scale and awesomeness of the journey you are taking; which is what you would expect from a composer whose credits include Dragon Age, Fallout and Prince of Persia. 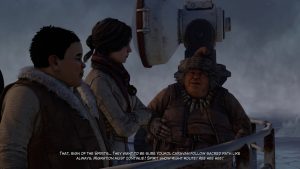 The puzzles themselves are well thought out and relatively involved, with one larger problem to solve in each area but many smaller moving parts to set in motion to accomplish this goal. The Youkols themselves, although generally always well-meaning, are not ever particularly useful in helping when a puzzle needs to be solved, which was actually fairly amusing, and confronted via some well-meaning but exasperated dialogue at times.

The other characters that you encounter feel well-rounded. Each has their own back-story which is addressed as part of their motives for either helping or hindering your progression. One particular favourite of mine is an old sea-captain-turned-local-drunk who you must convince to take to his ship once more.

The addition of decision-based dialogue which affects your relationships with these characters is a nice touch, with feedback indicating whether you have made the right or wrong decision, and how this has changed their feelings towards you. These dialogue options also allows you to change the character of Kate somewhat, with some options being decidedly cold and others much more tactful. 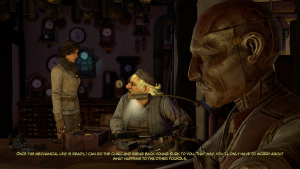 Although I assume that these decision-based interactions do not actually change the story in any way, they do allow you some customisation of how you want to play, and there are achievements related to them if that’s your kind of thing.

The story was a little disjointed, with one clear path involving Kate wanting to aid the Youkols on a journey where everything seems to be against them. However, the addition of Efimova and her associates jarred a little with me, and I’m still not entirely clear of their motives. It felt like this storyline either needed to be better explained, or left out entirely, as I was happy helping the Youkols overcome the obstacles in their way without worrying about pursuers with an unclear purpose.

Whist there are clearly a lot of improvements that could have been made, I did enjoy the experience of playing. The playtime turned out to be about twice as long as I anticipated it being which made it feel like a lot of bang for your buck, particularly for a puzzle-based game. Most importantly, despite its faults and although I can see why it may have been a let-down for fans of the series, I’d now quite like to go back and play the first two – so that must mean something good.