There’s only a few genres that have all of their games immediately associated with a steep difficulty curve, Rogue Stormers – from Black Forest Games – takes two of those, the Shoot’em Up and Roguelike, and splices them together into a gory, action-packed, four-player co-operative experience.

I didn’t quite know what to expect when I booted up the game, I knew it had five hero characters you could unlock, and from the rogue in the name suspected there would be procedural levels, a steep difficulty curve, and some randomised drops. In all three of these departments the game completely delivered. The rest of the game was a tight shooter, with an enemy composition that captured both squishy, expendable grunts, and tough mid-boss enemies which can turn a good situation bad with unfortunate placement. Add to this mix traps, perks, and upgrades, and the game has actually got massive amount of mechanics and components all battering against one another to make a solid multiplayer game.

The single player however, was a little bit too hard. Yes, I know it’s a roguelike game, yes, I know it’s a shoot’em up. Neither of these two things have reputations for kindness and ease-of-progression. But the reason the single player mode is so hard is because of what the multiplayer has that the single-player doesn’t. There is a progression system in the game which continues through both single player and multiplayer, this is managed through levelling up and unlocking perks as you play – if you play with strangers/friends you will get further in the game, and you will subsequently unlock more, even though XP is issued based on contribution. You see, in the multiplayer mode the difficulty curve of each of the levels remains the same, you just have vastly more multiplayer, as well as that you can respawn in the multiplayer if the other players collected enough health kits – an inevitable collect, and subsequently, an easy continue for a team of two (as I played) and even easier as a team of four.

The five characters that are included in the game all feel unique, with the variation offered by the different weapons, special moves, and abilities enough to set them all apart. The main problem is that visually they are very hard to differentiate due to the fact that the models take up such a small amount of the screen. In the heat of combat, flames licking around enemy gibs flying through the air from explosions caused by a mortar set a few metres back alongside a turret… At moments like that it’s nigh impossible to retain the focus on these small models – regardless of the fact that players have different coloured armour. 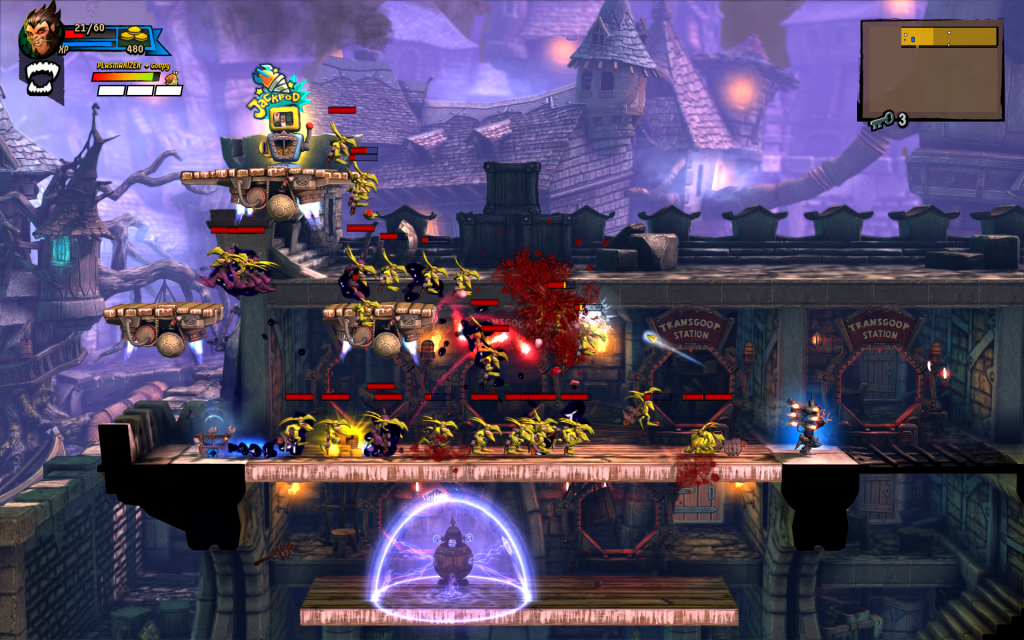 As a shoot’em up the game is great. Most smaller grunts go down quickly, while large flying enemies, big tank enemies, and various projectile flinging, slinging, and launching enemies take a fair few hits more – it means that the game is as much about using the full verticality of the screen as well as the horizontal extents. The largest tank enemy will take about 50 seconds of continuous fire from standard weaponry, and does quite a bit of damage if they can close the gap; here’s where clambering around the level comes into its own. Lead an enemy through a flame trap, or detonate an explosive barrel next to them and turn the pitfalls intended for you against the opponent. 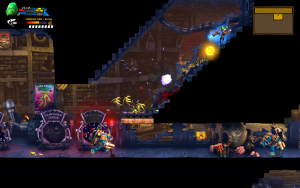 There are seven levels in the game, which are each made up of a string of rooms and passageways – each regenerated on restart – which each take around 30-40 minutes to play through if you are being thorough. At least, that’s the amount of time it took for myself and my co-Stormer to work through it. As the game is suitable for four players it will likely take vastly less, and -by the same par- much longer in single player. As I said, difficulty is not adapted, which means it’s likely a merciless rush for the power-ups and finish-line in four player (especially when playing with random people online) which will see you clear the game fast; but only get experience and perks relevant to your contribution.

Perks, buffs, and the secondary weapons of the game are a major strong point. Secondary weapons and buffs are pickups gathered by paying money into slot machines throughout the level, or finishing certain challenges (normally beating a boss) – the buffs stick with you until your run ends, giving you things like additional help, a training-wheels style shield that bursts into action when you take a hit, or damage boosts. The secondary weapons range from blunderbusses to turrets, but can also come with damage modifiers. The secondary weapons last as long as you can maintain them; with health/usage bars themselves, which can whittle down by use, but if carefully used can last three or four levels.

Perks, however, are permanent modifications to your character unlocked by beating bosses and levelling up through your various runs; with each level giving you a choice from two randomly selected perks, and each perk able to be levelled up multiple times. As well as that you unlock new items, characters, and secondary weapons through this. This progression system is what will keep players coming back, it changes up the basic mechanics just enough, and allows you to tweak your character to better fit your play-style – be that making the operatic, flamethrower-wielding character be even hardier, or faster to reload, or whatever you might wish. 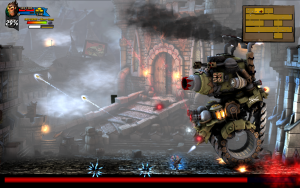 I actually played through Rogue Stormers on the Xbox One as opposed to my usual haunt of the PC. The Xbox One version gave me absolutely zero performance issues, however some of the loading times between levels were noticeably long, and the default controls set-up initially felt quite strange (LT to jump rather than A). After a while I grew used to both of these points however, and really came to enjoy my time with the game; albeit because of the fact I was playing through cooperatively rather than single-player.

The single-player aspect, as I said nearer to the start of this review, is unfortunately the weakest part of the game. Now, this is a very odd thing to say, as it’s actually exactly the same content and odds as the multiplayer/co-operative modes, however, that is the precise problem. In the multiplayer modes if you die you can be revived by simply waiting for any other player to have collected 20 health points worth of pickups. This isn’t much at all, and /to boot/ the character who picks up the healing items actually still gets healed, AND builds up the pool that you restore from. This is starkly juxtaposed to the fact that in the single player there is simply NO restart, or revival option – you can’t pick up X healing items when fully healed to gain a life, and you can’t kill X enemies in order to gain a retry. I appreciate hard-times are hand-in-hand with things that wear the Rogue label, but when that same thing is made easier in co-op, it should also be catered to in the hard mode – especially as progression is shared over the two modes.

It is hard going, weapon upgrades are slightly randomised, and maps are pieced together on level generation – so the game certainly captures some of the core Rogue elements; however, the game is a hybrid of Rogue and the Shoot’em Up, and for that reason it definitely feels like it needs something MORE, especially in the single player. I’ve come to the conclusion that what it actually needs is something that most of us here on B3 have come to dislike in games; mini-awards, over-celebration, and attitude. If an update was pushed where the game congratulated me on 10 special enemies beaten, and 100 of X beaten, and 5th time beating the boss, then that would probably be just enough to give the game sufficient pull to keep players grinding away through lower levels in the single player, especially if buffered with the ability to gain extra lives. That big pull to keep you playing at the single player is something the game definitely needs not least because the thought of playing multiplayer with strangers just instantly makes me imagine tugging at screen corners as mute strangers fail to communicate where they want to go (there is no screen split), or getting left pinned in a corner, being pummelled by enemies as my allies don’t want to risk themselves to save me. That said, the biggest payouts come at the end of the levels, and a team that collapses before then will be a team with no rewards.

Rogue Stormers is a great game to play with friends, however if you normally game alone, or are microphone shy, then it could be one to simply add to your wishlist waiting for the right time — unless you are a massive fan of the two genres it splices today.