Rise & Shine is a game that wears its heart on its sleeve. It’s an explosive, over the top action title filled to the brim with homages, robots, and bloody carnage.

From the moment you start the game up you are thrust into a situation that is far beyond your measure of control.  This feeling of being overwhelmed is a key aspect of the story and the action. Additionally, Rise & Shine isn’t a game that hides from gaming tropes but embraces them in a fun and self aware way. You are the only one who can save the world and it’s going to be one h

Now personally, I was very surprised by the way the story starts, given that the main character is a child. You play Rise, a young boy wondering around the mall when suddenly a brutal invasion begins. The first scene of the game opens with Rise watching a “Legendary Hero”(Link) get his chest ventilated. The hero, dying slowly hands Rise a special one of a kind weapon that gives him infinite respawns. This weapon is called Shine and it happens to talk, and be a bit of a smart ass, but it bonds with Rise in a profound and magical way. Thus starts Rise epic adventure to end the invasion and save Gamearth.

You will fight titanic sized robots, meet a mysterious amnesiac girl, and travel to places like the NPC Village and RPG Town. Truthfully, this game could’ve easily been cheesy with its Wreck-It Ralph aesthetics but the mix of action, story, and breath taking art keep it grounded and fun. While it may be a cliche itself, Rise & Shine is a roller-coaster of action that blast off like a magnetic ride from go all the way to the end. 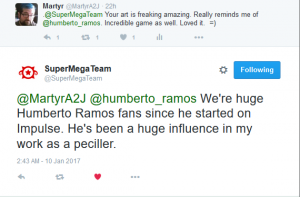 The story is presented to you in comic book fashion and by far, this is the thing I loved the most about this title. The art is utterly fantastic; the backgrounds, foregrounds, everything has an insane amount of detail. The characters are really given great definition and you can see each emotion, thought, and what they are experiencing, in their eyes. The comic art reminded me of Hemberto Ramos, the artist for awesome comics such as Crimson, Impulse, and Runaways. I tweeted at the developer this thought and found that the pencil artist is quite fond of his work and influenced the developer.

Of course a game is not made on pure aesthetics alone. Rise & Shine also delivers on simple but extremely enjoyable gameplay mechanics. Being mostly a side-scroller with a simple get from A to B objective. Going back to my indie game roots, players of Limbo aren’t going to be surprised by this, but there is quite a bit of child murder in this game. This is an invasion, with real lasers, bullets, missiles, and god knows what else being thrown at Rise. So you are going to see our pint sized hero die often.

Death is a frequent thing in this game. Get used to it!

This game is completely unforgiving about your mistakes, while you have a health meter that can take minor damage. Usually one shot is enough to make Rise’s head pop off like a grape. There are mines that incinerate you instantly. Lasers that leave nothing but your skull. Death is going to happen and while it can be frustrating you realize quickly that this is the games intention, more or less. Play this game the same way you would old-school Contra, dodge like crazy! Shoot everything you see!

To help you survive a tiny bit longer there is a cover mechanic, you can slide into cover in certain situations and shoot back from relative safety. Shine is a gun with infinite bullets so spray and pray is a fair tactic, but sometimes accuracy is needed. Your magical talking gun can also be modified and given upgrades to help you as you progress. A remote control bullet system that helps with puzzles and certain bosses, and a grenade launcher attachment that lets you arch shots and blow enemies to smithereens.

These upgrades are all given fair use and are useful all the way to the end of the game. Additionally, hidden in the environments are collectibles and ways to upgrade your guns clip size. While the games primary focus is the action, there are quite a few tricky puzzles and even some mini-games thrown into the mix. One particular mini-game was a basketball game with grenades that drove me insane. Speaking of insane, there is also an ironman mode in this game but I recently bought a new mouse I like and don’t want to break it. No thank you. 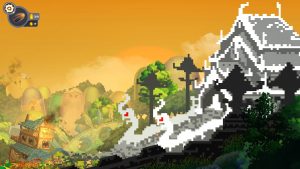 Let’s talk about controls. Rise & Shine does feature full controller support with rebindable keys which is fantastic. I had no problem setting up my controller exactly the way I wanted it. However, as I played more and more I felt like I wasn’t getting the exact accuracy I wanted from using the right thumbstick. Once I switched over to Keyboard/Mouse suddenly my accuracy was pinpoint and in a game where every bullet counts this is a big deal. Key/Mouse is far more precise and I couldn’t even imagine fighting the final boss without it. It’s something that is a bit of a disappointment, but it didn’t stop me from enjoying the game.

Other areas shine as well, such as music/sound effects. Not that I really listened to the music all that much because I was knee deep in the blood of my enemies. Seriously, the combat is so focused and intense, I didn’t notice there was music a good ninety percent of the time. That is far from a gripe with the game, but explosions and dodging bullets take far more precedence in my book. After I beat the game, I did go back and listen to some of the tracks and found them to be quite intense and sometimes pleasant.

Thinking back, its really hard to find any fault with Rise & Shine.

The developer did a fantastic job making this game and it is virtually bug free. The only thing I can see being a problem is that Rise & Shine delivers on quality over quantity. I know, that’s one of hell of a problem right? Rise & Shine is a very short game, I died more times then I can count and I still managed to beat the game within about four hours. We can stret

ch that out maybe to five given the collectibles but the game gives you an ability to re-visit areas of the game once complete.

This is quality work but I wanted so much more. The game ends on a cliffhanger and I felt like there could’ve been more upgrade ideas for Shine that could really enhance the gameplay even more. Sadly, it ends. Rather abruptly. On the bright side the game never gets tedious or grindy. I respect the decision to make the game the way it is and I will be super excited if the game gets a sequel. Just keep in mind like the recently released INSIDE, this is a bite sized treat. 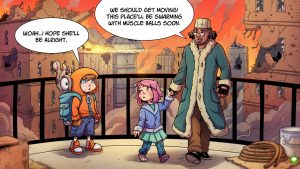 Replay-ability is something that I can see for this game. Easter eggs aside the combat is just so refreshing and smooth that I could blast away soldiers and robots just for fun. It’s a satisfying experience when you see a grunts head just explode in a red mist. It should be noted that the game does feature Achievements and Steam Cards.

To wrap up, I highly recommend this title, it’s a very satisfying action packed game with an awesome art style. While it doesn’t re-invent the wheel, it did remind me of old action arcade games but with a fresh twist. I am hard pressed to find a game that matches the quality of action this game presented.

As always be sure to check back with  B3 for all your gaming news, reviews, and the latest in gaming.