Ask anyone on the website about a specific platforming series from a certain French publisher which relaunched onto the scenes in 2011 and they’ll tell you not to mention it by name without ear-plugs in. You see, Rayman Legends was a masterpiece.  Audio, visual, controls, and gameplay were – for me – perfect, and really epitomised the wonder of the humble platformer.

Red Game Without a Great Name is pretty close in relation, although the reasons against it matching that brilliance are,  in my mind, the reasons that make the game what it is.

The stylish silhouetted obstacles of the world rotate, turn, and impale against a vicious explosion of bright colours as a background. You control a clockwork, messenger bird, setting off through this dangerous landscape, with your only method of control over the path of the bird being using elements of the environment – like blasts of steam – or teleportation.

The teleportation is really what makes the game, you simply drag FROM the bird to where you want to go, and you teleport to the last accessible piece of map from where you dragged the line to. Initially – as to be expected – this is introduced with a decent amount of room for error, however, shortly after that the map becomes layered with spiky, spiky death.

The simple menus (I love menus, why are they so simple now?) and the mechanic being a drag-n-drop style one gives an instant feeling that, here on PC, on my crummy wireless mouse, I’m out of my depth – that I should be playing this on something with a touchscreen, like a tablet or phone. That may well be my mind looking for an excuse however, as with a decent amount of practice – and some uttered grunts and cussing – I did start to pick up pace on the levels.

Another creeping thought is the hit detection. Run-and-jump platformers have their pixel jumps, and mad moments where you must pull off perfect bounces and dashes to clear particularly difficult parts (I’m looking at you Cloudberry Kingdom). RGWAGN has it’s equivalents, in fast paced moments where you must jump right at the perfect time to get through several obstacles in quick succession – and it’s hard, exasperatingly hard  – and as with anything similar you start blaming it on the mechanics, or input lag, because it’s easier to do so that admit you’re getting slower with age.

The art style remains magnificent throughout, even the level map is fantastic, and it’s nice to see the pitter-pattering line tracing out between buildings around the city showing you you’ve finally managed to unlock another level. Although – just as a thought, if you’re a flying bird then surely you wouldn’t need to head along the roadways as you do?

I rarely stress the details of music when it comes to writing up about games, however from the title-screen music onwards was absolutely magnificent. Clean crisp recordings, each with an excellent variety of instruments you wouldn’t normally be privy to in the everyman platformer – if the soundtrack does go out on sale, it’s a definite buy. 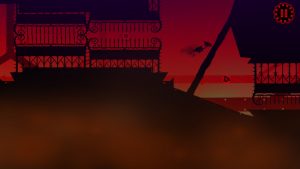 Should a game be so hard, that a game mechanic can seemingly scream that little effort was made porting the game from touchscreen? Maybe. What is important to consider however is the further components of the game, and how they change how you progress through the game. Within a few levels of starting you’ll have come across jets of gas which change your direction, you’ll also have started seeing exploding rocks which open other paths through the levels, shortly after that springs and moving parts… oh my. These things ramp the difficulty exponentially at each step, with (I don’t doubt) the last few levels being insane, blinding moments of godlike agility and/or high-pitched screaming.

Red Game without a Great Name might, indeed, have a terrible name, and it’s core mechanic might put itself in the firing line for blame – on PC – as opposed to difficulty, but it’s impossible to pretend that it’s not aesthetically sound, and musically sublime. If you like tightly-wound, pixel-jumping platform games then get this, simple.