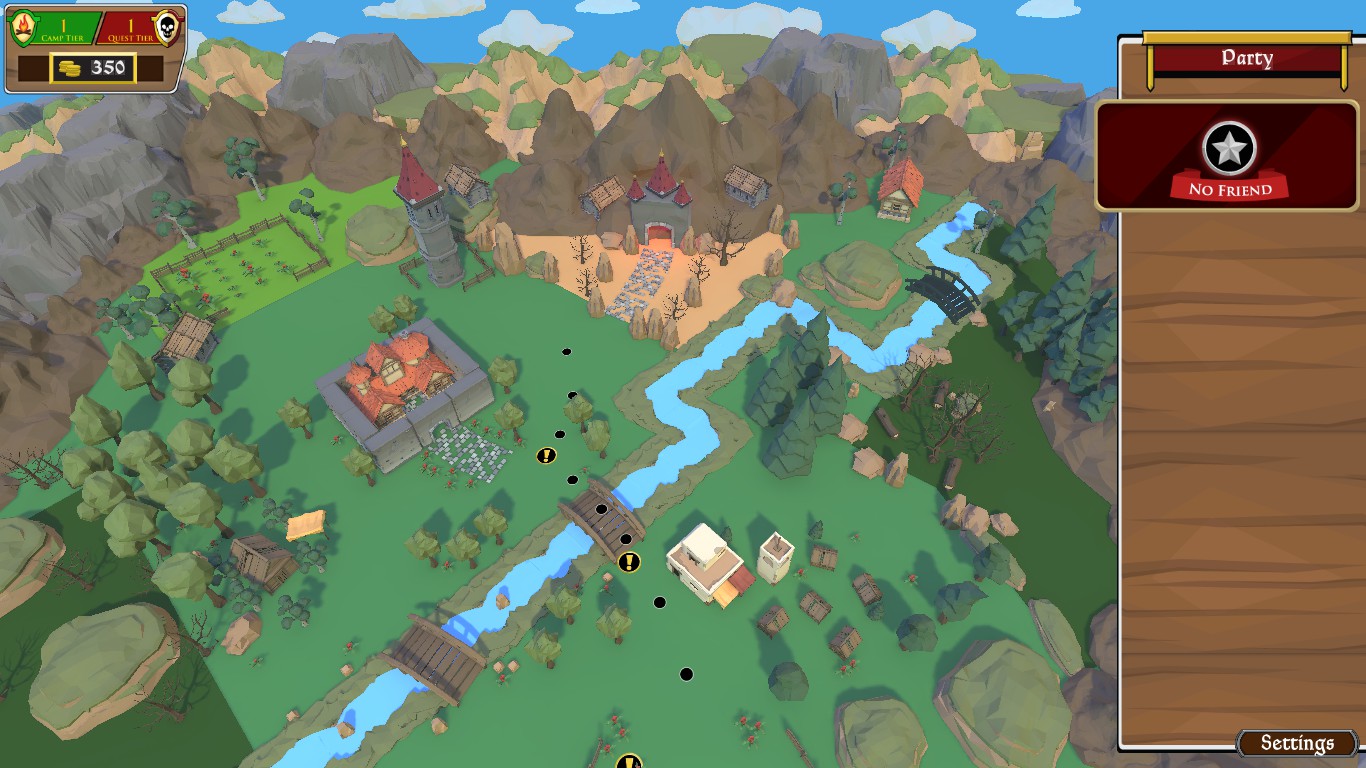 Perhaps you’ve run out of luck on Tinder or perhaps you’ve never tried it, but there’s a chance that you’ll be interested in trying out a new adventurer manager inspired by its swiping system. Ignore old-school stats like strength and intelligence and instead focus on the personalities within your party.

Intelligence, of course, may still be a sticking point with some characters.

Questr’s tagline, ‘Swipe right for adventure’, gets right down to the crux of the game. Inspired by Tinder’s method of choosing who you like or not, Questr lets you pick participants for your adventure by swiping left or right based on their personality. It’s currently available in early access.

Before you do anything, of course, you need a quest. Some of these will be presented as unavoidable story missions but the majority of quests you pick up will be offered as a range of different objectives. Each will reward a certain amount of gold and, perhaps, favour a certain personality in its final stage.

Once you’ve picked a quest, you have free reign to populate your party with adventurers and are given a number to choose from which is proportional to the level of your camp. Despite having limited space in your party, you can only ever see the top card at a time, so you have to weigh your rejections carefully against making sure you don’t run out of characters. Only by swiping right to accept them or left to reject them will you be able to view the next option.

To make sure you choose the right people, there are a few useful bits of information on their cards. Their level indicates how much power they’ll bring to a quest and high-levelled characters typically have a higher recruitment cost. Beneath their portrait is a statement from them summarising their personality which indicates what type of responses they’ll have during quests. All other information, such as species, alignment, likes and dislikes are useful in creating a team that works well together.

Overall, then, the aim is to match the difficulty level of the quest with the cumulative levels of the party members while making sure they get on well together. Party arguments cause far more damage than low levels, so personality is far more important. The main consideration is watching out for what each character dislikes, shown next to the thumbs-down icon.

Unfortunately this doesn’t always seem to be accurate, as a character can both like and dislike gnomes, leaving you clueless as to whether they’ll get on well at all. Only once you’ve selected your party members will you be able to tell for sure. Some characters are so incompatible with others that they’ll show up as ‘no match’ and be unable to use, but it’s sometimes difficult to discern where the boundary for triggering this is. Not only that, but some characters will lie about their level, age and traits, meaning you have to make sure you overestimate your initial recruitment. Mercifully you only pay for recruitment once you’ve selected your party, past the ‘investigate’ (for lies) and ‘no match’ screens.

With party in tow, you can finally send them out on the quest. Over the course of the journey you’ll see a series of interactions between party members, ranging from casual ‘this guy seems okay’ statements to the kind of sarcastic acceptance that only comes after an hour-long conversation about veganism. Most give either a positive or negative boost to morale.

Along the way, you can encounter any number of things, from bugbears and ogres to vampires and werewolves. Each character in your party will offer a suggestion on how to succeed and, let’s put it this way, it’s not always the most sensible options that see you through the encounter. Success or failure in these situations result in positive or negative morale boosts respectively. The cumulative morale score of you quest is added to the relative quest difficulty once you complete the final encounter and displayed on a spinning wheel which decides the overall outcome. This adds an extra level of randomness and risk — both positive and negative — to something which might otherwise have had a simple conclusion.

If you think that sounds too easy, don’t worry. The quests get progressively more difficult and you have to make careful decisions when it comes to managing your money. Upgrade your camp at the wrong time (to unlock more character applicants) and one failed quest could see you bankrupt and out of the game.

At the moment Questr has three maps to choose from, each with a different series of story quests but all in the same area. As development continues, more areas and questlines will be released, purchasable via gems that drop from completing a map’s story.

Each area is presented in a simple, low-poly art style which serves as a nice backdrop for your adventures and the tune which accompanies you is surprisingly catchy. But without a doubt, it’s the behaviour of the characters that brings this wacky title to life. They’re not like adventurers you’d find in many other games and you can get a good chuckle from working out what each does in a certain situation.

However, it doesn’t take too long to learn all the behaviours of a particular character. With any hope the encounters will vary with each area and, as development continues, new characters will be added to liven things up. As it stands, the quests risk becoming repetitive, although there are Steam achievements and in-game trophies (such as a dragon’s head) to add continuing incentive.

An additional feature given to Twitch streamers lets you insert the names of your viewers into character sheets and take them along on adventures with you, which is certainly a nice feature to see included so early in development.

Selling for around £11 on Steam, Questr as it stands may be a little too pricey for some, but the roadmap suggests interesting and expansive developments in the future and we can hope to see more content before the title is released. It’s a good casual game to dip in and out of, if you feel a need to swipe right for adventure.