QoD (Quest of Dungeons) is not to be mistaken with CoD (yeah you know the one) as this is a “rogue-like” for the Wii-U, although its also out for the PC, Nintendo 3DS and Xbox One. QoD is a turn based dungeon crawler game, a rogue-like, so when you die it’s bye bye, to the start we go.

An evil Dark Lord has stolen all the light, (guess he got bored of wearing shades) so your mission is to enter his lair and defeat him. The dungeons layout is procedural so you won’t find items/enemies in the same place each time you play, which is nice if you like your replay value.

Sounds of the game almost made it feel as if I was in a dungeon with sounds of water (or could even be blood) dripping, hitting the floor, and groans of “beasties” waiting for you. I turned up the volume on the TV as much as I could (but to not upset the missus) to be drawn into the game as much as I possibly could as it was very disturbing. I’m just glad I didn’t have the windows open at the time, passers by would had thought I had a big leak…

Game-Play wise you get to choose one out of four classes. Sadly it’s only a single player game, but having more than one player in a turn based would get quite annoying.

Melee expert of the group,heavy Armour, lots of health.

Very weak to start off with, magician or “nuker” of the group, struggles with mana early on.

Ranged expert using bows,very weak as does not have as much health as the others.

Mixes both ranged skills and melee attacks but is classed as easiest to beat the game with. 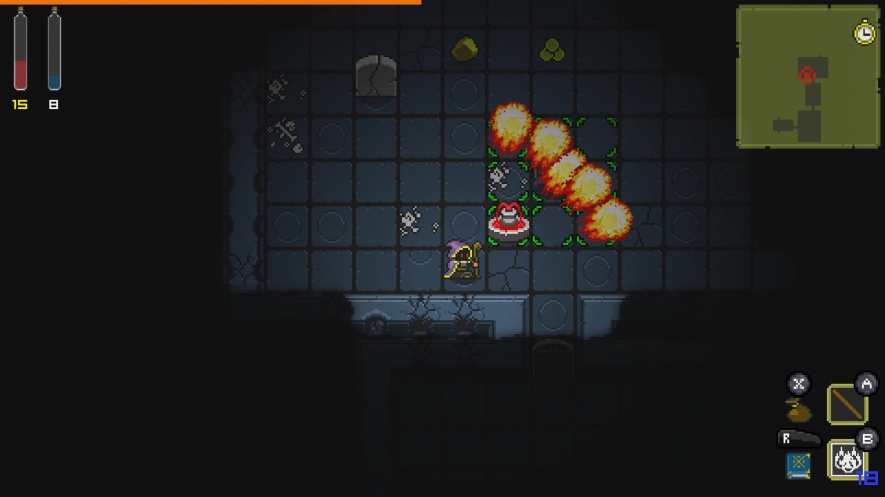 When you’ve cleared a floor of the nasties, the game gives you exp to level up, and get more powerful by getting more health and mana. The loot in the game, which is the main thing in this as you might expect, does give you some very nice bonuses; also you’re going to bump into shops to sell your old stuff and the treasure that you find. You may find better equipment in the shops, as well as finding more important things like keys for treasure rooms/chests. Chests come later, but more often then not you’ve run of the specific keys so if you can afford keys make sure you do get ’em, also there’s quests to find and complete for a nice amount of exp and gold, the quests themselves are very basic like finding a certain monster and kill it or find an item and don’t worry about handing in the quest as it finishes it for you soon as you kill or collect.

Graphically QoD excels at looking like a 16-bit masterpiece with different tile sets for each floor, different monsters, even different treasure types, but the one thing that really did annoy me about the game graphically is no matter what the equipment the chosen character weilds, it looks exactly the same throughout, so if you give your Wizard green trousers ‘cos it gives you extra mana, don’t expect to see the colours change in the dungeon.

Controls are nice and simple A to “primary attack” B to cast your selected spell, X is your inventory, Y picks things up, but if you don’t like that, you can turn on “auto collect” in the options, R chooses your skill (if you have more then one) L tells you if you have any buffs (such as added armor, better chance of rare loot and extra gold drop per monster) or debuffs on you,(like Damage over Time Skills<DoTS>such as how many turns your character is going to get burned by, reduced armor, so it’s always a good idea on checking that often but all of the buttons can be rebinded to different buttons in the options.

All pictures and screenshots obtained from Upfall Studios’ presskit.