There’s a moment in many action films where the hero and his adversary fight each other unarmed, weapons flung just out of reach. The hero and the villain, or the villain’s guard, punching and pulling and pushing, rolling around while trying to keep the other at bay. Each secretly trying to grab for that nearby, freshly-discarded weapon.

Those who have played and enjoyed —and there are many of us— the original Nidhogg might find that opening statement peculiar, after all the first title was a low-rez game made relevant, challenging and —well— nostalgic, by its visual style. To me the first title was a series of rapid repeats of that first fight in the original Prince of Persia once you’ve gathered your blade. Both were, after all, games about fencing style combat: deft, adept disarmament and conquest. 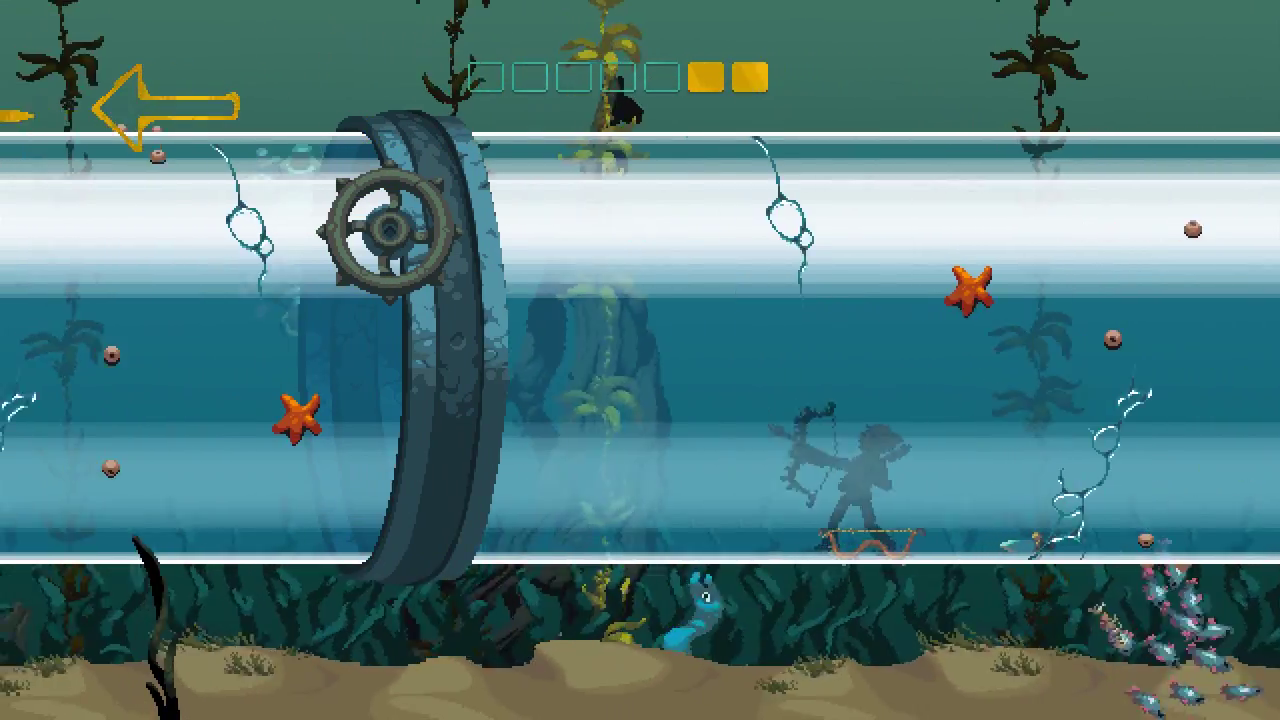 But, we kid ourselves. Nidhogg was as much about tricking rivals down holes, about throwing our blade at unexpected times, and also about doing amazing dive-kicks to disarm enemies and then beat them to a pulp. Indeed, Nidhogg was tense, responsive and required your full attention.

Nidhogg 2 is still all of those, although it’s more like “Nidhogg 2: Complete, Remastered Five Year Anniversary Edition.” In which I mean it feels like a sequel launched a few years later, received an expansion pack and then, in the effort to stay relevant, was upgraded to the next generation of computers.

While this is a reference to many things, the most obvious one is the visuals. Compared to the simple, pure visuals of the first title they’ve taken on a wonderful new form which allows for livelier, varied backgrounds. The grotesque art style is somewhat reminiscent of claymation games, while also having the busy aesthetic of when 2D games attempt to emulate 3D with heavy lighting effects on characters — like James Pond, Zool, and (recently) Putty Squad. This busy effect is achieved through six or seven layers of artwork. 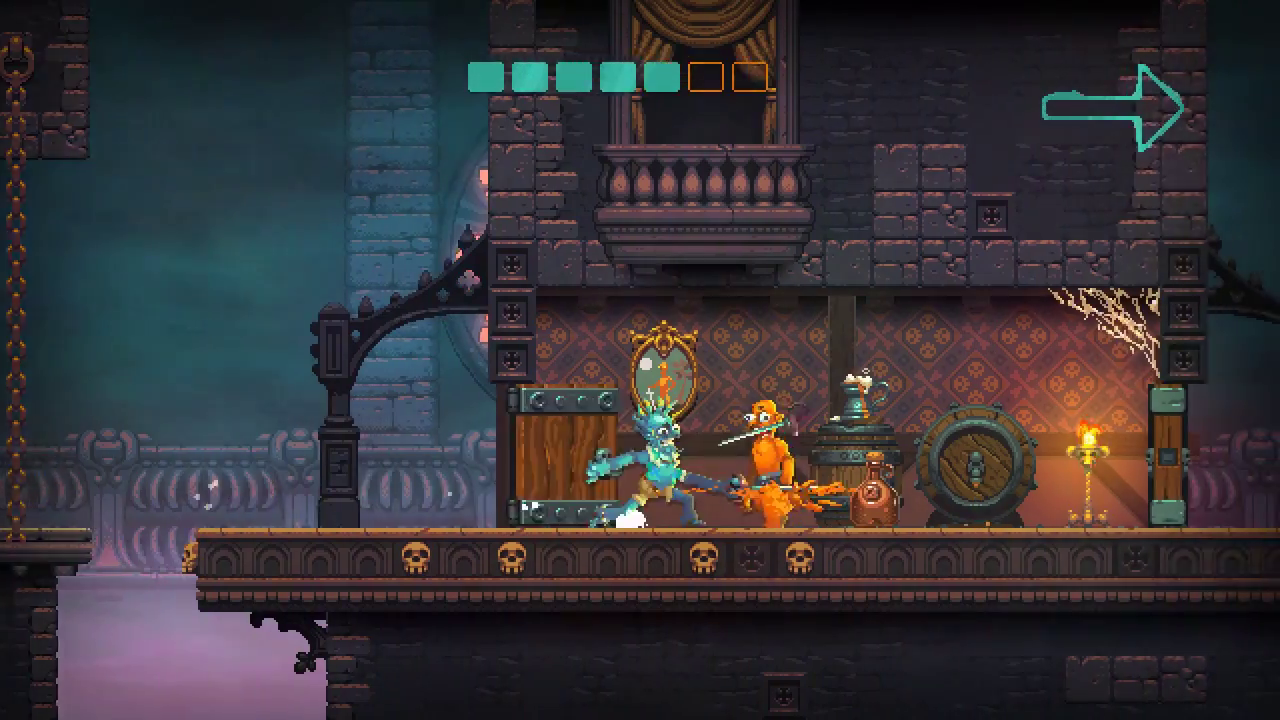 Although the visuals were most definitely the game’s most heated discussion point up to its launch, there’s actually been a lot of changes to the games combat. Divekicks, parrying, throwing and slide disarmament are still in, but they’re joined by extra weapons, melee attacks (outside punching) and much more varied maps.

The weapons, and the variety they bring, is by and large the ‘expansion pack’ that I mentioned earlier, although that said they all fit the pace and general vibe of the first title; somewhat hard to explain considering the obvious range differences between a dagger and a bow & arrow. Each weapon has its own limitations, strengths and weaknesses. The dagger seems to fly faster and is essentially more subtle due to being smaller, the character can change ‘height’ with it much easier too; contrast that to the broadsword which has no mid-height but attacks in sweeping attacks which can disarm or simply destroy the enemy with ease — assuming you time it right. Then the bow and arrow set up sends slow-moving but deadly arrows across the map. These are deadly if they make contact, but can be easily dodged or reflected if the target is paying enough attention.

The biggest change to combat is in melee —as previously mentioned— the first game allowed you to slide kick somebody to disarm them, divekick into somebody for similar effect, or (if you got behind them while you were unarmed) punch somebody into a downed state. In Nidhogg 2 melee includes a snap kick which can disarm at mid height. This means you now have three angles of attack in melee while face to face with an opponent. The new standing kick is undoubtedly the most useful of the lot, especially against the AI opponents of the arcade mode. 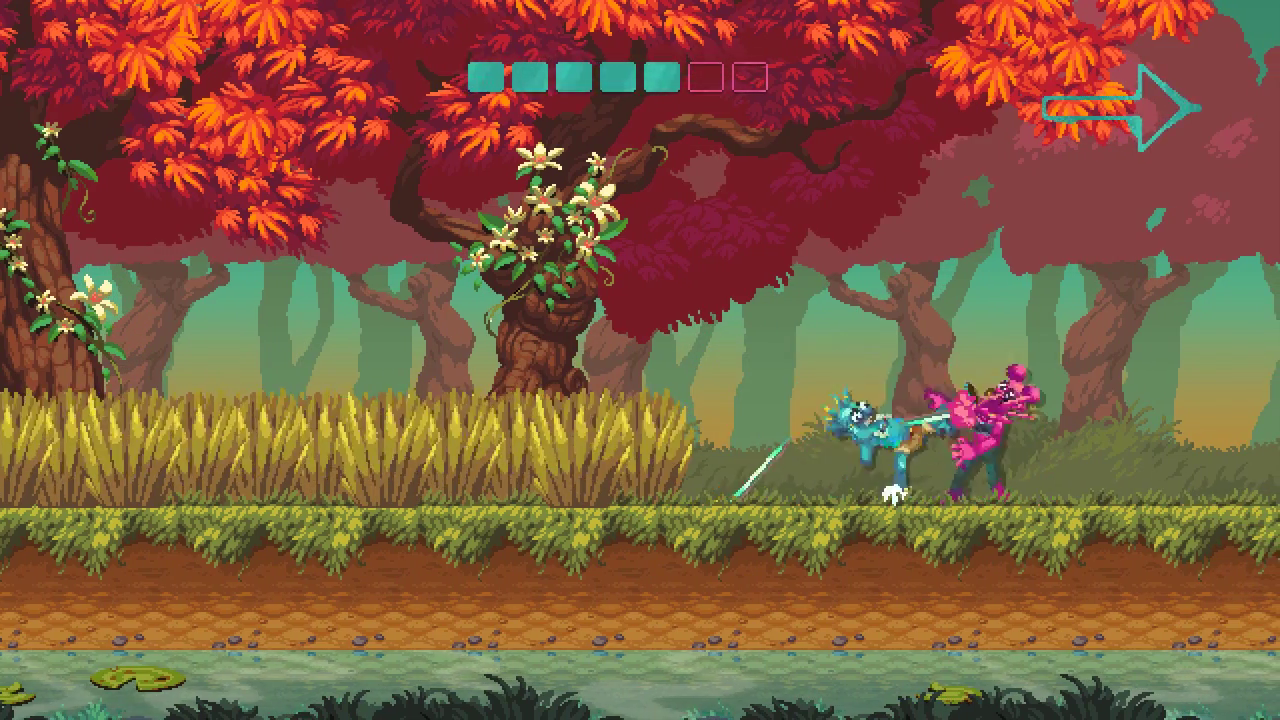 This means that exchanges in the first, (EX) dive, dash, throw sword, duck thrown sword, grab enemies blade and turn in time to impale your foe, are replaced with more standing antics. Knocking a thrown object out of the air, or kicking a blade from an enemy’s hands became my main assault – with the fencing blade disarmament elevated from expected and mandatory to exceptional and magnificent.

And so, we’re back to that opening point: the hero and villain rolling around disarmed. Because there’s so many more ways to disarm your enemy (blade to blade, foot to character, bow to face) a much greater amount of time is spent unarmed, scrambling around for a discarded or deflected weapon, and it feels tense and brilliant.

All of these faster, more varied battles take place over a much wider selection of levels; from burning forts to rainbow roads. That said, much like the first game, playing it single player does get dull after a while due to the AI falling for a few tricks (which are hard to shake once you know them). Unlike the first however, multiplayer is ready from the get go, which will certainly add more life to the game even if it doesn’t replace Nidhogg’s place on the co-operative circuits. 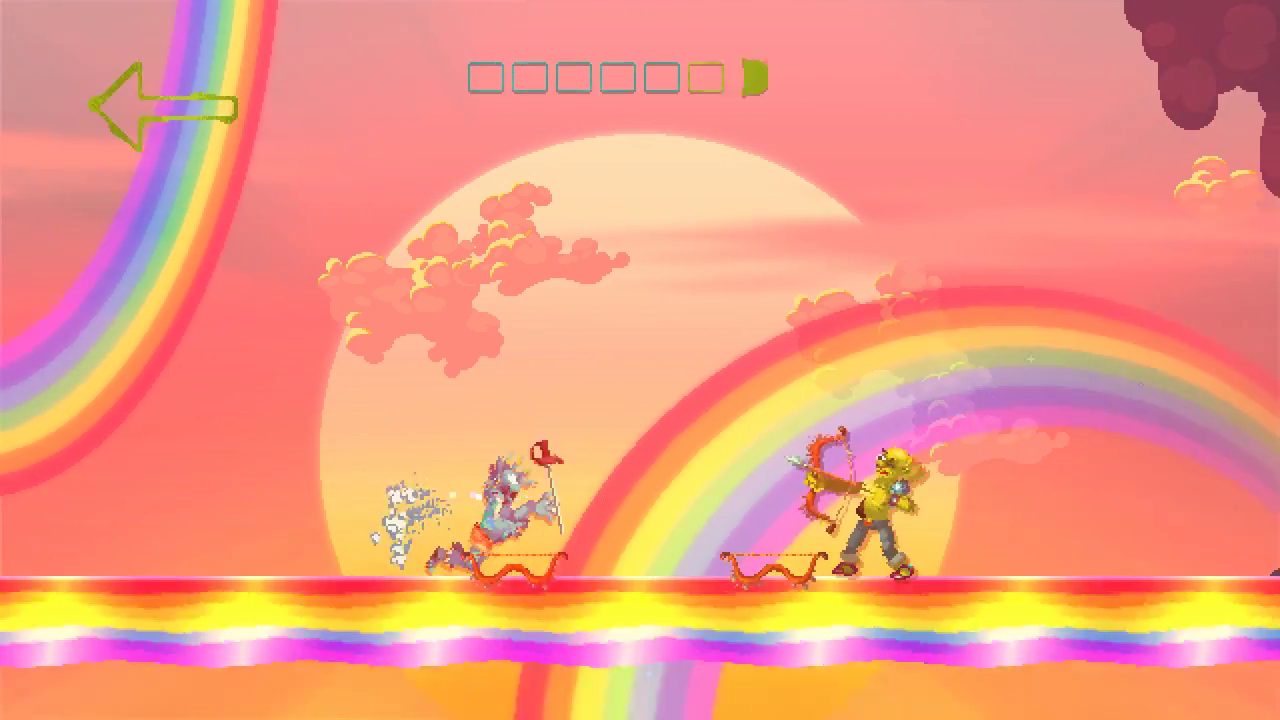 I’ve really got little negative to say about Nidhogg 2, if only due to the fact that it continues on the legacy of the title but with more variety. The game will undeniably be replayed when I have friends around, or online, and my only real wish for the game is to see more weapons, levels, character customisation options, and soundtracks added.