The beauty of Narcosis is that the horror doesn’t derive from some silly monster or crazed animatronics. Your own mind is the enemy, as you experience an underwater disaster first hand and the trauma that follows.

I am not what you would call a horror purist. I think games with monsters that cannot be killed come off silly. Repetitive jump scares are annoying and gore doesn’t really scare me. It’s a genre I have rarely connected with. I understand why people enjoy it, but it takes a special kind of horror game to catch my attention. Games like System Shock 2, Bioshock, and Alien Isolation are games that really create a terrifying atmosphere for me and are my personal favorites. 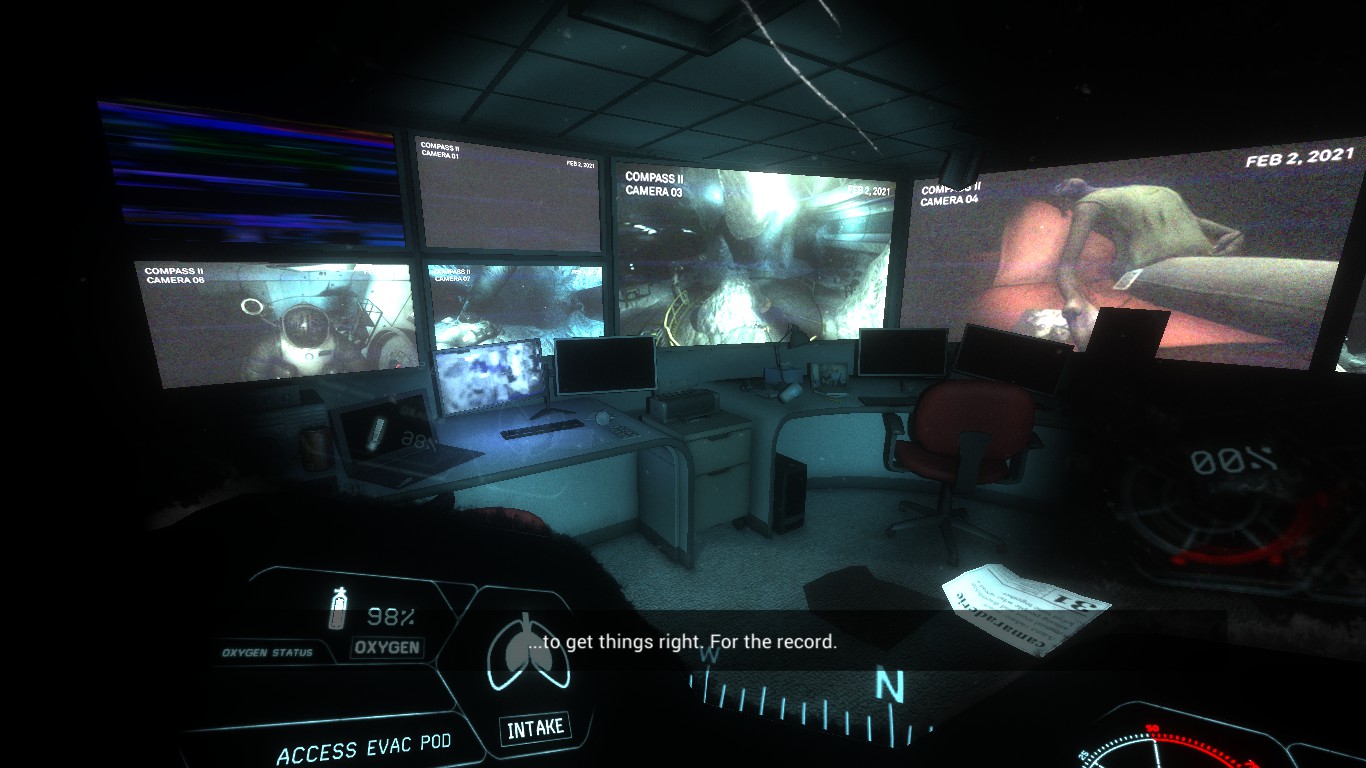 To be clear, I am not saying that Narcosis(steam link) isn’t guilty of any of the aforementioned tropes. As a matter of fact there are “monsters” that cannot be killed, a couple of jump scares, and even a bit of gore in this game. What separates this one for me, is that the terror in this game is approached realistically and matches that approach with an equally terrifying atmosphere.

One very neat thing about Narcosis is that it supports OSVR, Oculus, and HTV Vive. While I don’t currently own any VR headsets, I highly recommend it for a number of reasons we will cover.

Before we start I need to get something off my chest. Narcosis is a horror game but to sum up any additional aspects, Walking simulator covers the rest.

When I say walking simulator I don’t mean that in any mean or derisive way. On the contrary. I think the Walking simulator is a genre of its own, along the lines of Roguelike. These types of games have some deep and impactful gameplay that they can offer. Anybody who has played Gone Home or Everybody’s Gone to Rapture can attest to that. 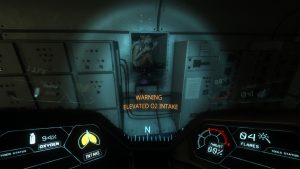 The gameplay of Narcosis is bare bones. You spend the game in a dive suit that can withstand the rigors of deep water. There a is a bit of a twisted tutorial at the beginning, but most of its functions are simple. The primary function to be concerned with in order to stay alive is your oxygen level. Due to faulty equipment, your O2 tanks don’t last as long as they should. Additionally as you experience stressful situations you begin to breathe more rapidly and exhaust more oxygen. What this basically means is that when you see something really messed up you start to bleed oxygen, fast.

This oxygen mechanic, I had a love/hate relationship with. On one hand I have seen a dead person in real life and it’s disturbing to say the least. Thankfully, I have never experienced a disaster involving the lives of many so its hard to connect with the main character in that way. Despite that, I kinda got annoyed by my our main character as they seemingly just freaked out over everything. Every body you come across will scare you same amount no matter how long you’ve been around one. No matter how screwed up things become, you panic the same amount.

Then again, if people were truly in this situation, who really knows how they would react? 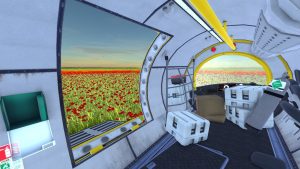 I understand that the oxygen mechanic is there to keep you moving and give you a sense of urgency but it also served as a big warning sign for me whenever I came across fresh O2 tanks. Something was about to go down and I better be careful. I also knew that usually after an event that drained me like crazy that an O2 tank was nearby afterwards, otherwise it was game over. Not to say the game became predictable but a lifeline was always nearby.

Your suit comes with some other functions. There is a flare launcher in your right arm that you will need to traverse the underwater terrain and sometimes annoy creatures of the deep. The suit also can activate a thruster, which you can use to jump over gaps and do a bit of platforming as well. Last but certainly not least you have a trusty knife. You can stab things, need I say more?

The story of Narcosis is an underwater disaster. Nothing fancy like aliens, government conspiracy, or ghosts. Just a plain old disaster.

A team of twenty people are mining for industrial chemicals. After a horrendous earthquake hits, everything goes to hell and the sea turns on you like it’s a rabid dog, or rabid crab in this case. Your entire goal for the game is to survive, escape, and find other survivors. It sounds simple but this is far from easy. The point is driven into your head that this is the sea. You move frustratingly slow, this is intended to represent the sluggishness of water. Your isolation inside of this huge suit becomes claustrophobic immediately. You are helpless and everything in the sea seems to know that. 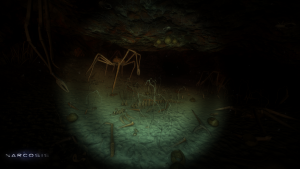 You will be attacked by sea creatures, which is why you have the knife. Combat is an aspect that is very light in the way it actually plays out.  Sea-squid spots you, latches onto your glass dome, stabby-stabby, and it goes away or dies. It’s terrifying the first time it happens and I can only imagine the effect in VR but you quickly learn to deal with these moments. Keep in mind if you can’t kill it, it will kill you instantly. Giant spider like crabs roam this part of the sea and treat your suit like a pin cushion.

All of the functions are there to enhance your sensation of being underwater/VR. The platforming puzzles are simple but one mess up and your glass cracks and its over. There is some puzzle solving and plenty of searching to be done as well. Aside from finding survivors you can bring home mementos of each crew member to enhance the story even more.

Lets get down to brass tacks shall we? Is Narcosis scary?

Hell yes it is. The developer crafted this terrifying underwater environment and added a whole other layer I didn’t see coming. Your mind itself begins to turn on you as you begin to hallucinate. Now maybe this is due to a concussion or perhaps, as the games name would imply, drug based. It is never really made clear. 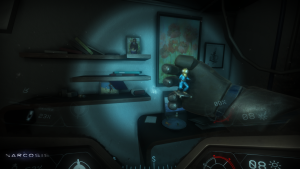 That doesn’t change the fact that things get weird, really weird. It’s this blending of reality and hallucination that really creeps you out. What is real and what isn’t? Survivors guilt is a very powerful thing that can do terrible things to the mind. On the other hand the mind can do extraordinary things to help us cope with events that surround us. While I don’t want to get to spoiler heavy there are moments that it seems like the hallucinations are trying to help and others where they are trying to kill you. What you take away from this story is an equal part of the enjoyment of this game.

The story itself I don’t want to talk about much. It’s really best experienced as you play. I will say that the ending is a gut punch. I didn’t see it coming. You won’t regret playing this game through to the end. There is some awesome voice acting that serves to narrate the game as you move along. The graphics are very dark and sinister. This is done to keep the game very aesthetically pleasing and it works well with the sea. I especially loved when things got twisted.

The sounds of Narcosis left me feeling unnerved and uncomfortable.

I mean that in all good ways, as you can imagine. The music, while light, slips in when needed. The sound effects are somewhat muted. The constant hum of the ocean is there and it really just got to me. Obviously the developer was aiming for more realism than pronounced and clear sound effects from the ocean floor. That may annoy some, but it makes sense for the game, you are wearing a dive suit after all.

One issue Narcosis does have is that it’s a short experience. I beat the game in about four hours. Aside from some missing mementos there is really little reason for me to go back and play again. This is aimed at being an experience and something you can show off to your friends, especially if you have a VR headset. Otherwise it’s lacking in replay and overall length.

To wrap up, I had fun playing Narcosis. I love the idea of the mind being its own monster. It was a unique horror game and unique experience. For that alone I recommend Narcosis. Aside from the unique atmosphere there isn’t much in the way of innovation. This is a SOLID Horror/Walking Sim. Keep in mind that at $19.99/£15.99 you are getting a four hour game. People who will get the most bang for their buck from this game are owners of VR headsets. That shouldn’t dissuade you if do not have one, especially if you enjoy a unique experience.