In Hyper Knights war is tiny, bloody, and very fun.

Take everything you love about Mount & Blade then hit it with a shrink ray and you’ve got Hyper Knights. Intrigued? I know I was when I heard about this little gem. Truthfully, Hyper Knights came out of left field but it quickly became a bit of an obsession for me. I started playing and suddenly hours had passed. My fingers hurt but half the map was mine!

There are obviously key differences between this game and its forefathers. Mount & Blade is far more engrossing, complex, and skill based. Hyper Knights on the other hand is easy to pick up and play, quick, and combat is very simplistic. Sometimes you want that simplicity and fun, other times you may be craving something more.

If you are craving something deeper then you have a buffet worth of games to enjoy. If you are like me and sometimes want some mindless slaughter and light tactics, pickings can be slim.(Outside the mobile market.) I haven’t found a game that I can enjoy like this since playing Gemfire, an old Sega Genesis game.

Oh and if you do have any suggestions there is a comment section. Feel free to share.

Story is super light but basically Red guys took all of your Blue lands. Time to raise up an army and lay down a medieval butt kicking. Beyond that, the game is all about territory control and gaining/losing ground. The world map is where you move your personal army about and make territory improvements. Each territory has three kind of nodes, village, castle, and keep, each with three levels of upgrades to make them more efficient/produce/stronger. It’s a simplistic economy that becomes very important as you progress. 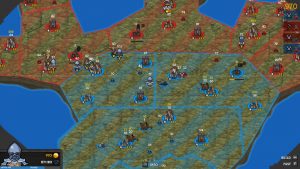 Villages make gold that the castle needs to make troops. Gold can’t be transported without troops. While it does need a bit of a jump start, it runs efficiently long as no enemies get in the way. Keeps are there just to serve as strongholds and make conquering a territory difficult. The castle is the last node that can be taken before it switches the territory to the other side, which makes keeps very useful.

Keep in mind that you aren’t doing all of this alone. While you choose what to improve, the game generates “Roamers” who serve as a light defense and help run the economy. You can also recruit Knights who serve as generals and are far better at combat. These Knights can be assigned to defend/attack and level up just like you do. The beauty of these systems is that it took longer to write out then it does take grasp it when playing. It’s super simple and works really well. 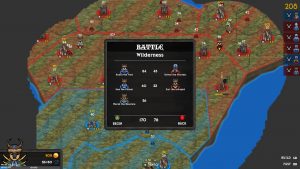 The only gripe I have is that there is currently only one world map to conquer. Hopefully new content is on the way to change things up occasionally. Another slight issue I had was with the enemy itself. They have the entire map filled out at the beginning of the game. At times it feels like you’re only alive because the game is merciful and just doesn’t send everything at you. On the flip side, this gives the game a bit of a manic feeling with one territory capture leading to bigger and bigger fights.

I wouldn’t mind an option for both armies to start with one territory and build towards each other. Running raids, surprise attacks, etc.

Now all that strategy/territory is nice but the heart of the game is the combat. Hyper Knights is best played with a controller and thankfully does have controller support. Just like M&B depending on what or where you’re attacking is going to alter the combat map. Raiding a castle requires destruction of gates, and eventually the throne. Raiding a village requires burning it down. Same applies for convoys, keeps, etc. 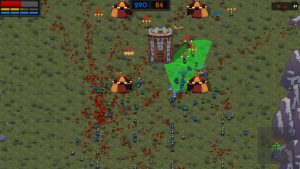 Your character has combos, stuns, basic attacks, and dashes. Basic attacks are going to make your fingers bleed by pressing the X and Y button repeatedly in certain combo combinations to kill enemies. As an example archers require Y-Y-Y and melee attackers X-X-X but as you fight Knights and more advanced enemies these begin to change up rapidly. Requiring more complicated combinations and punishing you with damage for you not getting them correct.

While stuns and dashes are self explanatory, combos are equivalent to using special powers. You gain skill points and combo points as you successfully attack your enemy. Skill points enhance passives like health, army size, and troop strength. While combo points unlock Super Slash, an attack that kills everything in sight. At first you only have access to healing and spike which is a basic attack.

Not to worry though as you are given more than enough points to master all skills/combos as you brutally murder your enemies. The combat, just like the world map, is super easy to grasp and it doesn’t take long to get into the action. There are more fine details such as squads, and Knight’s shields, and second breaths but it’s all to enhance that combat. Not to mention the random events that can occur. Sudden surprise attacks from within, all nodes becoming crippled to name a couple. 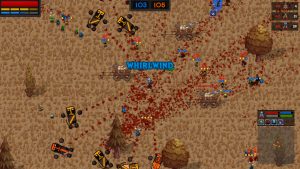 Overall the combat is a blast and watching the battlefield become red after a Super slash is fantastic. The only problem lies in the late game, it can be a bit of a slog when you start throwing six hundred vs six hundred. You become heavily dependent on those combos and may break your x and y button. Battles for castles become tiring, as more and more enemy reinforcements arrive. The challenge doesn’t really escalate but it feels more annoying than threatening. The AI is incredibly dumb and you can wipe out whole armies by yourself. Just keep your army safe and away and go to town.

Hyper Knights goes the extra mile and offers some customization. While not the most extravagant of choices, you can swap out weapons, helmets, and chest armor. The cherry on top comes in the form of Steam workshop support. Suddenly, you could be a medieval knight swinging a lightsabre. Hyper Knights has picked up some good buzz so hopefully more will come from the community itself as well. 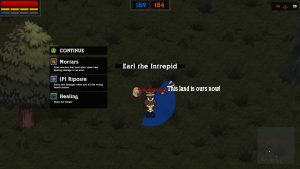 The graphics are cute and serve exactly the purpose they need to get the point across. I personally liked little touches like enemy Knights getting an introduction and raising their arms up. The only suggestion I would have for the developer would be to add some more absurd humor to the game, as it just kinda fits. Other than that, I have no issues with the graphics at all. They work very well.

The music and sounds are just about par. I wasn’t terribly impressed but I wasn’t disappointed either. You could play the game just fine with the OST or bring your own tunes. In this particular case it’s going to be personal choice.

Last but certainly not least, Hyper Knights supports Twitch, has Steam cards and achievements. Replay is there but I think once the developer adds more maps it’s going to go through the roof as far as replay-ability. Right now you have one map and that can get repetitive. Each play through can take about two to four hours, but there is a new game+ mode. This mode lets you keep all your levels and combos and serves as a speedrun type of deal.

Hyper Knights isn’t going to revolutionize gaming, but I loved it for what it is.

I haven’t seen many games like Hyper Knights and for that alone I obviously highly recommend this title. For me it falls into this weird section of developers innovating what you know and love ever so slightly to make it feel fresh. Which brings me to my final point. This game costs less than a McValue meal.  Coming in at the low price of $4.99/£3.99 there is really no reason not to add this excellent title to your Steam library.