Sacrifice is a beautiful mechanic in Hollow Knight.

I have never been a huge fan of Dark Souls, Bloodborne, or the recently released Nioh for the most part. Games that are purposefully difficult tend to frustrate me and I just don’t play games for that experience. They are all great games in their own right, don’t get me wrong. One thing that I have found with these games is that I absolutely loved the way in which they tell a story and how much freedom to explore you have. Dark Souls alone has thousands of videos about its lore on Youtube. Bloodborne is a honeycomb on top of a labyrinth of paths, dungeons, bosses, and tidbits of story. Hollow Knight captures the exact same spirit of mystery and freedom to discover in the same vane of the aforementioned titles. 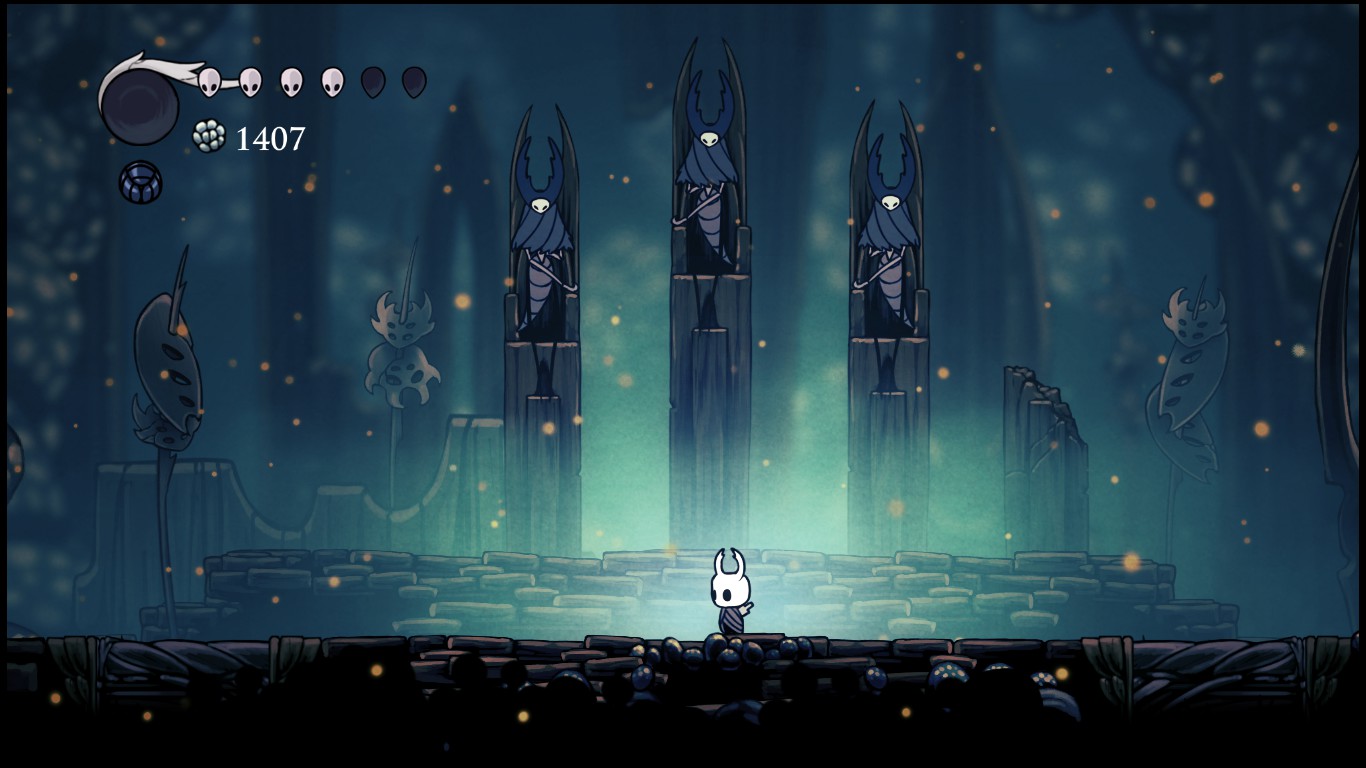 There are obviously key differences, Hollow Knight is predominantly a Metroidvania style game. In case you’re not familiar with that term; it basically means you gain abilities/powers that let you access more areas of the game which had previously seemed closed off to you. Beyond that Hollow Knight wants to be a Souls like game. You are dropped into a situation where you have no idea whats going on and have little to any clue where to go. The story is given in breadcrumbs and every enemy you face has the potential to kill you if you’re not careful. Death can be a punishing affair as all your hard earned Geo(money) is ripped from you. The only way to recover your Geo is to fight a haunting, shadowy figure of yourself. 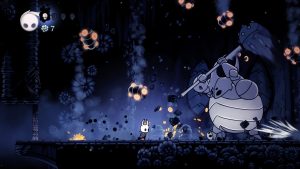 I am getting ahead of myself though. You play a tiny warrior with a mysterious past who for some reason or another chooses to brave the depths beneath a small town called Dirtmouth. The bug inhabitants of the town have all been lost to voices that whisper of treasure, purpose, and wonders beneath the surface. At first Hollow Knight is a game that is very bleak looking, the colors are all very monotone in shades of greys and blues. Everything is dilapidated and the music spins a somber tale of tragedy. Eventually things do begin to brighten up but the tone is never far off from reminding you that something is definitely wrong.

The music and sounds of Hollow Knight alone are beautiful enough for me to listen to for hours on end. The soundtrack of this game delivers, over and over as you explore the vast Hallownest. Hollow Knight may be about bugs and grubs but it draws you in rather quickly into its world and suddenly none of that matters. You forget and you’re picking your jaw off the floor the first time you see the City of Tears. Then the game introduces you to quirky characters that genuinely make you laugh. There is a humor despite things being gloomy. I was impressed the way the developers weaved in its charm throughout the somber setting. 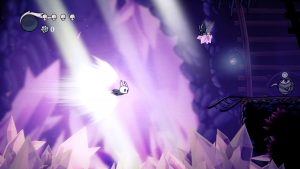 Mechanically Hollow Knight excels as well. Just like any game of this type, the controls are extremely tight and easy to grasp. I preferred my controller as it just felt more fluid but keyboard/mouse is just fine as well. There is plenty of platforming and tricky dodges/jumps you will have to make in this game. Dashes, wall crawls, and more will be required to do well in this game. While I wouldn’t put this up there in same difficulty level as a Soul’s game, I found myself dying many times to the bosses in this game. Which meant having to fight my way back and try again. There is no rushing, even the basic enemies have a good chance of killing you if you screw around.

To even up the odds, Hollow Knight puts all the power in your hands. You can heal at any point in the game with the use of soul power. As you strike your enemies a soul meter fills but this meter also serves more than just one purpose. Do you recover those two hit points you just lost or use your Vengeful spirit spell to do massive damage to a boss? Use your healing power at a bad time and you could potentially end up worse off than where you were. This system of choosing when to use that precious resource is one of the beauties of this game. 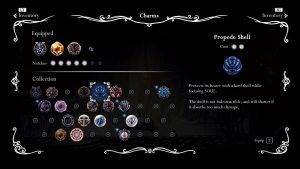 Additionally there are Charms you can equip that have a whole host of powers and boons to your character. These are very powerful artifacts so only a certain amount can be equipped. You can upgrade the amount you can use throughout the game. Typical trappings of a metroidvania are present such as health upgrades, soul meter upgrades, weapon upgrades and more. Now finding these upgrades is in itself a challenge. There is no hand holding, the directions to the Nailsmith are, “He is in another place” and that’s it.

Exploration in itself is a wonderful feature to this title. At no point is the game specifically telling you to go somewhere. You make your own adventure and I absolutely adored that about Hollow Knight. You’re the intruder that is shaking things up and some of the inhabitants don’t appreciate that. This is felt as you progress through the varied environments of the game. Items must be found and then taken halfway across the map sometimes to fulfill a purpose. Thankfully, Hollow Knight doesn’t stray into the tedious or grindy, there is a fast travel system in the game. You unlock coach stations in certain parts of dungeons that will take you as far as you like. While I appreciated having this save me loads of time, I kinda wished I had to walk everywhere. 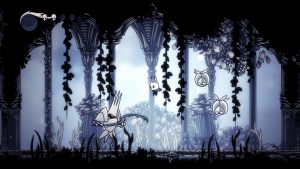 It’s a beautiful game, and it’s constantly teaching you to be better. There are secrets everywhere and adorable worms that need saving for even more awesome rewards.

Let’s talk about bosses. These fights are brutal, sometimes unexpected, and can be very difficult, but they tend to swing wildly on the pendulum of difficulty. Some bosses I find to be very accessible, fun,  and challenging. Then there are moments where the difficulty just spikes and death is assured. Some standard tropes apply to bosses. Every boss has a pattern to their actions. It’s more about memorizing that pattern and capitalizing on it. Striking and then dodging a set sequence of attacks. Rinse and repeat. To be blunt the bosses of Hollow Knight are an acquired taste, if you enjoyed games such as Resin, which is about difficulty and timing, then you will feel right at home. If you are looking for more of a platformer or something less grindy then think twice.

Don’t worry to much, every fight is a fair fight. Just play smart and you will win. 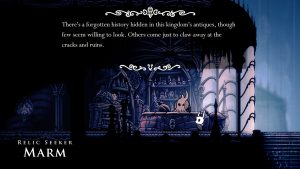 One thing to keep in mind is that Hollow Knight is a game that requires an investment. If you find yourself not enchanted by the game at start. Give it more time and explore deeper the layers of this title. I don’t think you will be disappointed. This is LONG game and I haven’t even talked about the Dream nail which radically changes things. Especially for the end of the game and much of its lore. You are looking at a good twenty to thirty hours of gameplay. That time will be spent exploring at your own pace and unless you use a guide, discovering all there is to find.

Of course we always have that question of innovation, does Hollow Knight reinvent the wheel? When it comes to metroidvanias, it is standard, games like Ori and the Blind Forest and Guacamelee are eager for you to discover its universe. Hollow Knight makes you work for it. I wouldn’t say that it doesn’t value your time but its going to give you what you put into it. This will throw off some people off that are expecting an easier experience.

There is no hand holding and this is going to challenge you.

In all, I had a absolute blast when it came to playing Hollow Knight, I felt an instant connection to this game. Your experience may vary but I hope you can see all the merits of the game the way I see them. It’s (pun intended) bug free, well made and comes with Steam Achievements/cards. Coming in at the Indie standard of $14.99/£10.99 you are getting a great value for your money. I highly recommend this title to any fan of Metroidvanias/Souls like games. I urge caution to those who are expecting instant gratification though.