Review | DOOM: The Board Game

Just ten days ago, it was announced that players of id’s exceptional DOOM would soon benefit from full access to all of the released DLC at no cost as part of update 6.66. Although I own the DOOM video game (and I think it is brilliant) I’ve spent most of my free time lately enjoying a different (but inextricably linked) experience. Yes, ladies and gentlemen, the pictures have no doubt given it away; I’ve been playing DOOM: The Board Game and maybe – just maybe – it is even more brilliant than the video game it shares a name with. Don’t believe it? Let me tell you why…

First of all, just look at those miniatures… Look at that box-art and the modular boards and all of those lovely tokens. Look at the stylised covers on this instruction books! This is a generous boxful of stuff to say the least, and with the full backing of both Bethesda and id Software, along with the production experience of Fantasy Flight Games (FFG), DOOM: The Board Game makes incredible use of the license. The Marine miniatures are deliberately generic, in keeping with their understated, nameless role in the canon storyline, but the Hellish forces of The Invader are a totally different prospect 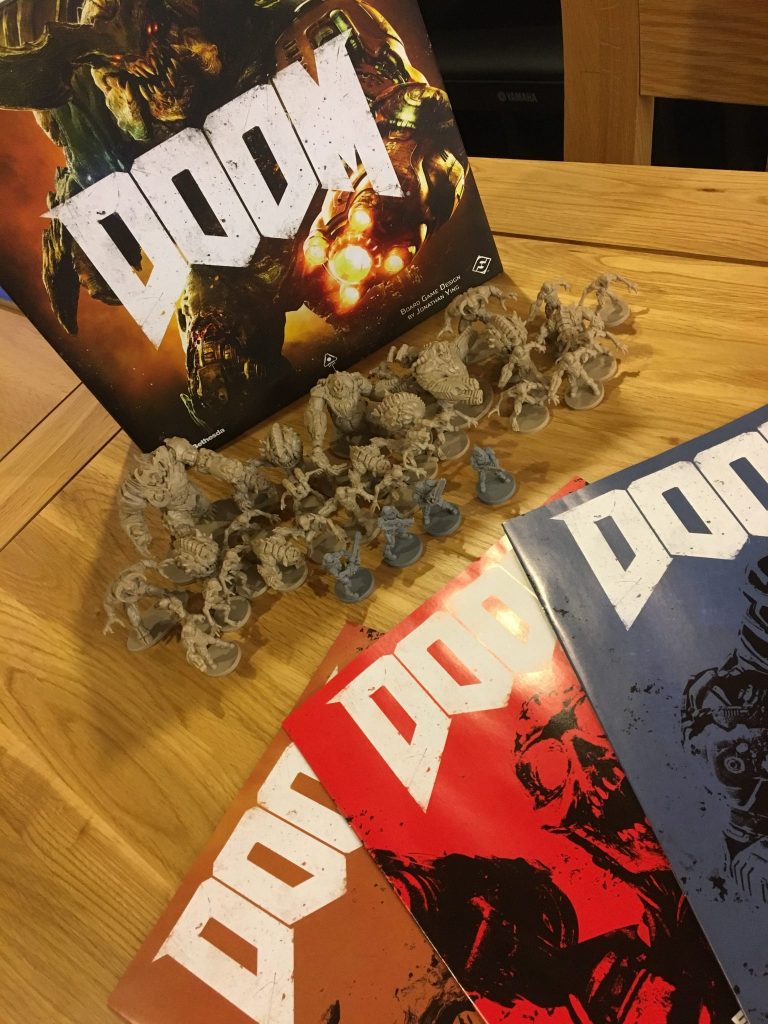 From the slender, dynamic Imps to the hulking Cyberdemon, every creature oozes malice and bad intention, and whilst there is no variation among creatures of the same kind, there are enough different kinds of demon that you’ll never get bored of seeing them. What’s more impressive is that (with the exception of the three-piece Cyberdemon) each model comes as a single piece, and is ready for action as soon as you open the box. FFG are known for using a kind of bendy plastic which makes their miniatures more durable, but can lead to weapons and limbs bending out of shape. I experienced no such problems with DOOM: The Board Game, and I must say, these demons are by far the most detailed I’ve seen from FFG to date.

Other components are similarly well done, and the end result is a very authentic experience. The three instruction booklets, comprising of a Rules Reference, an Operations Manual and a Quick Start Guide feature glorious cover art and exceptional content. The general decision made by FFG to provide a Quick Start Guide in every game works wonders here, and combined with the prebuilt miniatures you can get from sealed box to the first turn in about fifteen minutes. The Operations Manual provides twelve missions across two overarching campaigns, and whilst there are no legacy features in the game, it’s still nice to feel like part of the video game story and structure. The Rules Reference provides considerable detail about rules interactions and the many features not accommodated in the Quick Start Guide, and following setup, is probably the only booklet you’ll need to hand when playing. 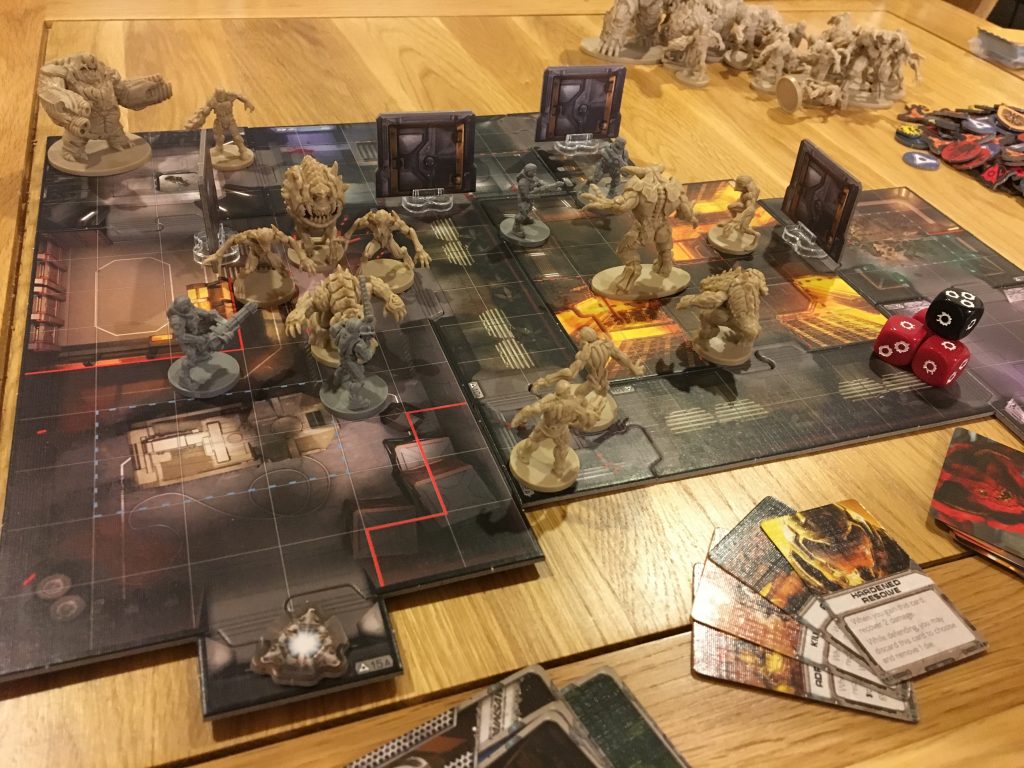 When setting up, you may feel as if DOOM: The Board Game has a few too many cards to work through (and it certainly comes with too few baggies and no storage solution for them) but all will be revealed once you actually start to play. You see, DOOM: The Board Game has some very cool ways of ensuring that it not only looks like the video game, but that it also feels like it. Movement and combat is driven by decks of cards held by each player, and made up of weapon and equipment features (Marines) and behaviours (The Invader) that allow certain things to happen. These things, without exception, are incredibly flavoursome.

In the case of each Marine, a default deck of the same four cards is dealt out, alongside three cards for each of two weapons that each marine begins the game with. This deck of ten cards becomes the action deck for that marine, and each card has values on it like movement, range and often, one or more special rules. By default, each Marine player has a hand of three cards, which he then uses to dictate his play for the turn. Each Marine can use a primary action and any number of bonus actions per turn, and once movement points are accrued, they can be used before and after attacking, or both, allowing Marine’s a tactical option to hit and run when possible. The Invader player has a similar deck, based on themed sets of six cards with names like “Overwhelming Power” which can be used at various times to enhance the default movement and combat bonuses that each demon has as standard. 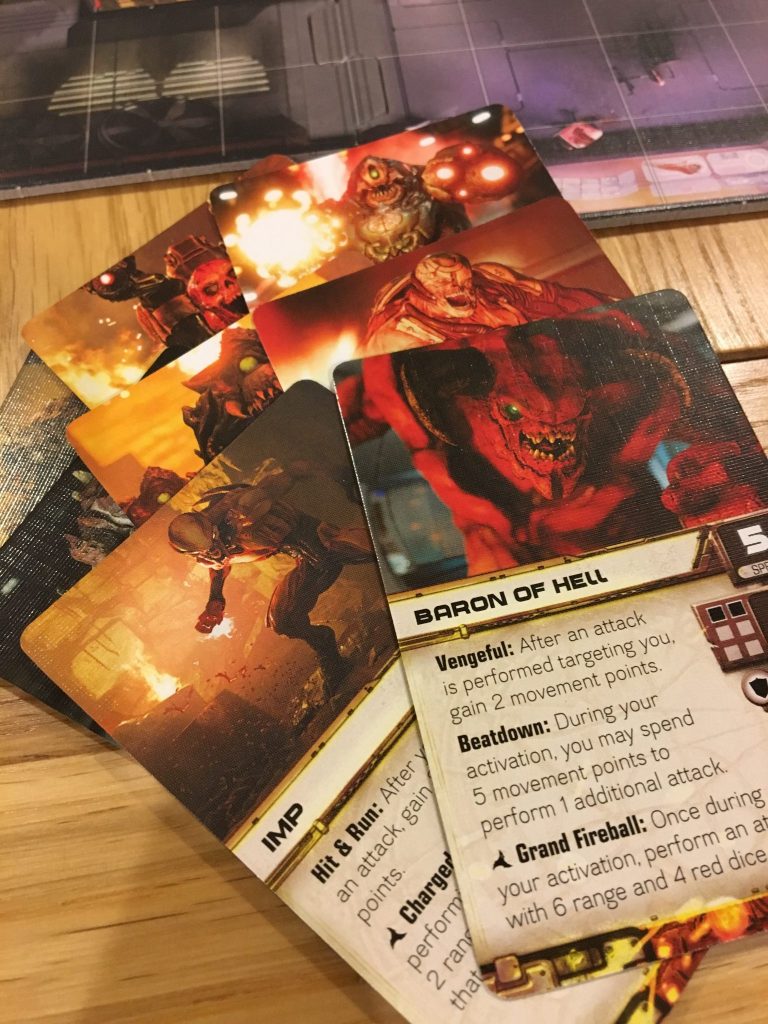 Whilst these decks of cards mean subtly different things to each of The Invader and the Marine players, they do have one thing in common. Whenever a model takes damage, the controller of that model must draw a card from the top of their deck and look at the symbols in the top right hand corner. Each shield cancels out a hit, whilst other symbols mean it is dodged entirely, or that a special outcome takes place that depends on which model has been hit. Considering that there are already a staggering amount of cards in DOOM: The Board Game, I did appreciate the way in which the designers chose to use the event decks for a dual purpose, and I also liked that the defence mechanic is common to both The Invader and each Marine. For clarity, when an event deck is exhausted (which happens several times per game) the discard pile is shuffled and replaced face down, ready to use again.

One other deck of cards is linked to another flavoursome mechanic that comes directly from the 2016 video game which is that of glory kills. Each monster can receive a number of damage points before it becomes staggered, at which time it continues to fight, but can be killed instantly if a Marine simply steps onto the same space as it. Should this happen, the Marine player instantly regains two hit points and draws a card from the glory kill deck. This mechanic, combined with the way movement points are managed and the ability to use any number of bonus cards can lead to some glorious single turn killing sprees, which actually kind of reminded me of playing Conan, as it happens. 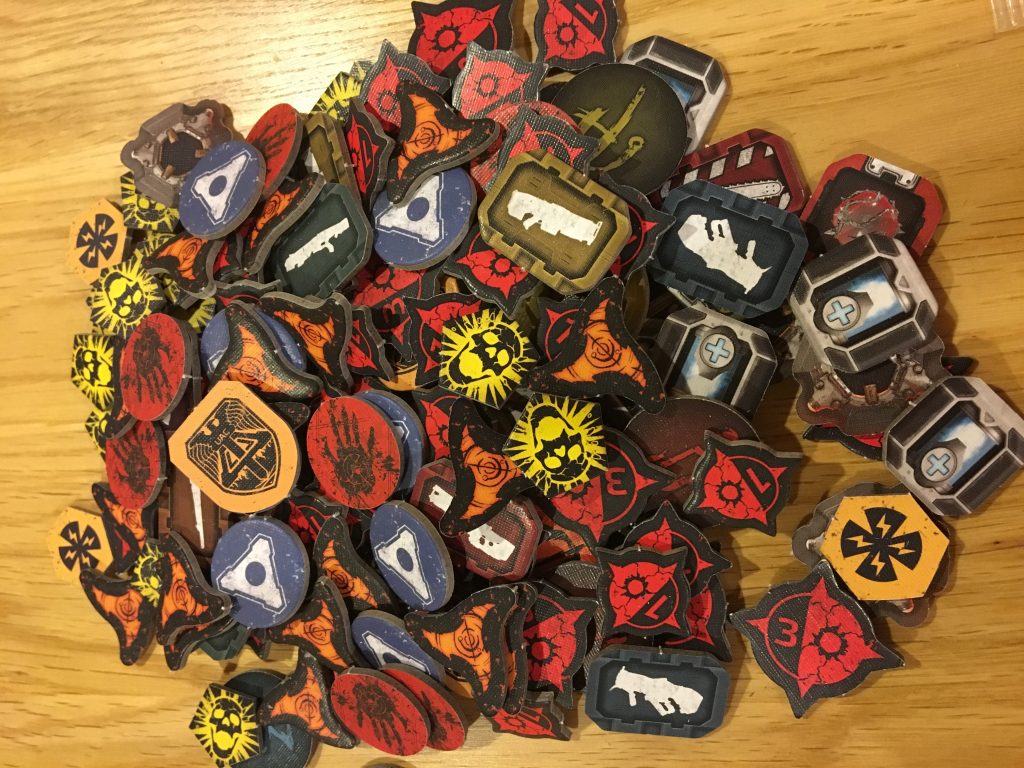 I’ve referred a few times to other cards, and I’ve mentioned that there are a staggering number of them, but most fulfil more minor or more static roles in the game. Monster cards are worthy of note, as they are really stunning to look at, but remain face down until the monsters shown on them are spawned as the result of the Marine’s exploration. When a marine gains line of sight to one of the multi-coloured on-board tokens, The Invader player refers to yet another card (which varies by mission) to decide what creature will spawn there. If it is a new kind of monster, he flips the relevant card face up and takes an initiative card which he places aside.

It is these initiative cards that actually control the order of play in game, and at the beginning of each round, the initiative deck is shuffled (including adding an extra Invader initiative card for each new kind of monster that entered the game in the last round.) These cards are then drawn in turn by The Invader, which means that the player who went first last turn might go last next turn, or anything in between. With four Marine players, this can lead to the swift downfall of the demon forces, whilst at the other end of the spectrum, a solo marine is given extra health and a larger hand of action cards to compensate for the number of times he or she will be attacked by demons in a single round. 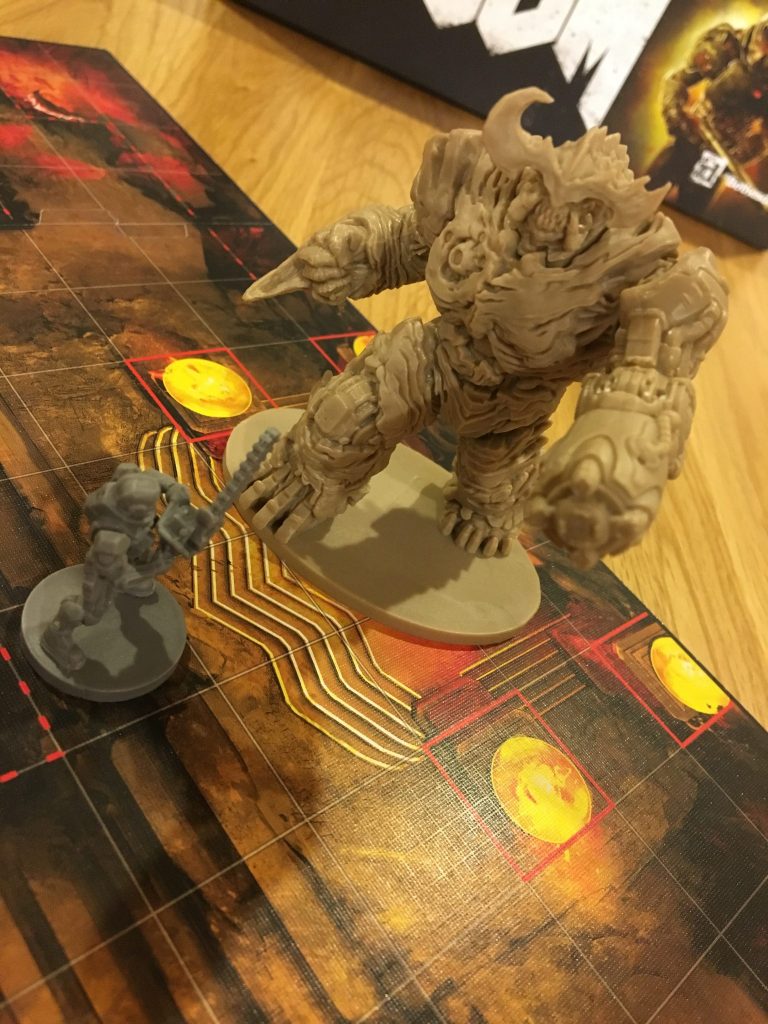 There are a few other features to note in DOOM: The Board Game, and most of them relate to more cards or tokens, so I’ll save you the chore of reading my description here when the manual does a perfectly good job of providing all the minute detail. The more interesting (and certainly more important) thing is that when playing as a Marine, this board game feels incredibly true to the video game, which is a feat by any measure, but made all the more impressive because of just how fast paced and visceral the latest version of DOOM actually is.

Marine players will actually be able to visualise themselves spending an action card, moving a space, taking a shot at a nearby demon and then following up with a glory kill before blasting another demon with a bonus action. Other actions simulate the idea of a marine planting their feet and unloading both barrels of a Super Shotgun or the BFG – and it feels great. Combat is handled by rolling red and black dice, with up to two and three hits being the maximum yield from each. The strength of each attack is determined by the action card used, which in turn is a product of the weapon that the Marine is holding. As a result, the faster you move, the weaker your attack will tend to be, and vice versa. Again, this feels like an authentic feature, however obvious it may seem. 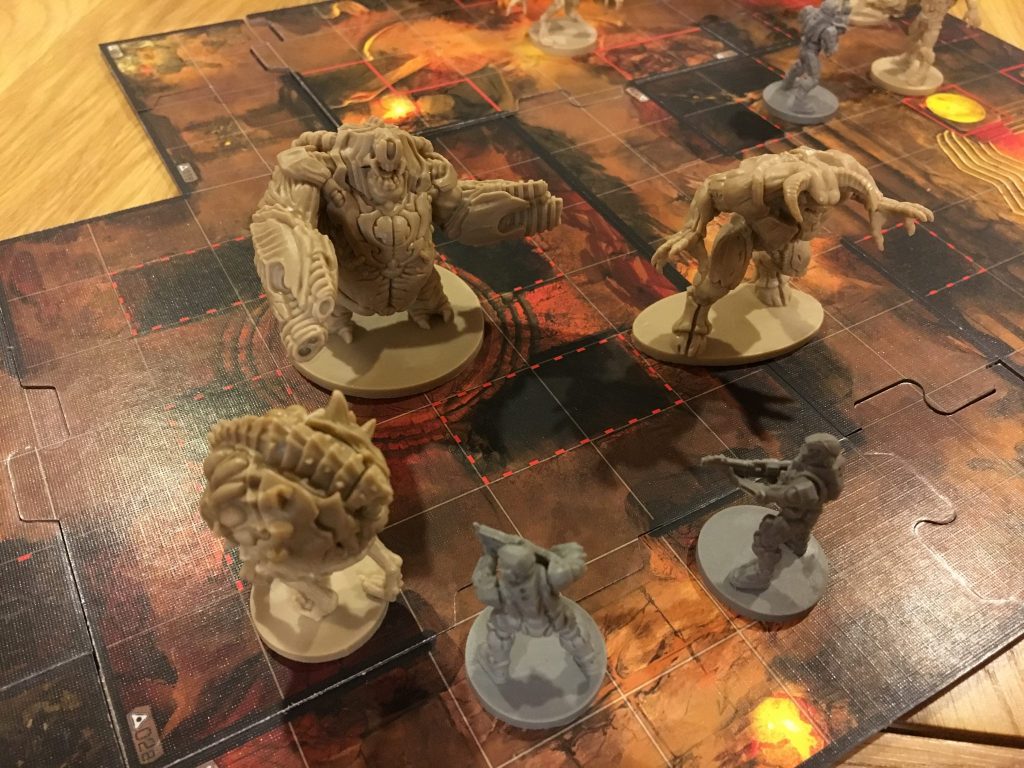 Playing as The Invader on the other hand, is like having access to a simple, powerful Dungeon Master toolkit that is set in one of the most iconic and exciting video game worlds ever created. It raises questions like “should I choose two Cacodemons or a Baron of Hell” and “if I play my Darkness card now, will it give my Pinky demon chance to close the distance on that isolated Marine.” Within the boundaries of the game and what is fair and reasonable, you’ll always have something to do; some dark scheme to enact, or some unseen horror to unleash.

And there you have DOOM: The Board Game. It’s a huge box full of components, cards, tokens and daunting mechanics, yet unbelievably, it comes together to feel faster and more accessible than almost any similar game. It’s the kind of game that can generate nail-biting conclusions, and that makes the Marine players want to swap role with The Invader and replay the same level from the other side. The components are of a very high standard, and I only have a couple of reservations about the game among a sea of positives. Firstly, I wish the same level of cohesive gameplay could have been achieved with a few less pieces (not that I have any helpful suggestions) and secondly, the marine miniatures are so generic that they are hard to tell apart, and coloured bases would have been nice. Neither of those reservations detract from the game, and as a result I highly recommend DOOM: The Board Game, and I have a feeling that it will remain one of my favourite miniatures games for some time to come.

A copy of DOOM: The Board Game was provided for review purposes and can be purchased via 365 Games or through one of the shops found in this handy Store Locator.