Something about Don’t Open the Doors speaks to my inner child. I guess you could just call me a sucker for claymation. It all goes back to when I was much younger. That playdoh just seemed like a world of infinite possibilities. To be fair, I made infinite snakes, so many snakes. I wasn’t very talented. That never changed the fact I was impressed with people who could create worlds with paper and clay, so I find these types of games alluring. Combining two mediums is always a fun idea and usually rife with imagination and expressions of art. From Kirby’s Epic yarn to Armikrog, and Tearaway, these games are full of wonderful art and look completely different when compared to most games.

As you can imagine, when I saw Don’t Open the Doors, I was very excited. Now unlike Armikrog, this title was an action/adventure title. It has more in common with games like Bastion, where the action is intense, and hordes of enemies and bosses await.

So much so that there is a tiny little cameo from The Kid in the game. There are some key differences between the two, but they share a strange universe, RPG elements, and a top down view of the action.

Upon loading up the game you immediately feel like you’ve lost your footing. While a reference to Alice tumbling down the rabbit hole feels cliche, it really does fit the universe of Don’t Open the Doors. Sarcastic talking vegetation, and merchants who won’t barter until you learn their name; the universe is quite strange and it takes some time to get familiar with things.

The basic gist is that Doors have appeared all over the place, giving people the creeps and making wildlife become dangerous and hostile. You are given the Megabomb to detonate the biggest door and hopefully stop this plague of spreading doors.

Of course, you lose the Megabomb and your wacky adventure begins.

That is about as straight forward a story as you’re going to get from this game, because Doors’ story is nonsensical. One second you’re joining a bug hating tribe, the next you are using red apples to smash red porcupines so you can paint yourself. 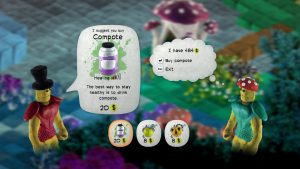 It’s a weird game, but weird in a good way. Just try and relax, enjoy the journey and don’t worry about details.

The games main selling point is obviously the unique art style. Your quest takes place on this huge over world map that is filled to the brim with dungeons, shops, doors, and more cactus than you can shake a stick at. The claymation is so well done that you almost forget that it’s there. Especially during combat. Then suddenly you’ll focus on something and see all the shapes and moulds. There are dozens of different designs and all the environments are blended beautifully with the action on screen. There is a bit of palette swapping for certain plants/trees, but you will find more unique designs more then not.

The only gripe I have, is I would’ve liked a bit more cut scenes or more voice work in the game. Just to give the characters more personality. Not that its lacking whimsical charm but I felt it would’ve been enhanced even more.

Despite the game being called Don’t Open the Doors, you actually spend the entire game doing the exact opposite and opening them. This is where you find a bulk of the progression, power ups, and equipment you will use throughout the game. Each door is an isolated area that has a unique level design and varying degree of difficulty. Some doors are a straight forward smash/grab type of deal, others can have you going through a labyrinth. The level design is very impressive and it’s one of the things I loved most about this title. You never knew what was going to be behind a door and it kept things fresh and exciting.

Progression is pretty simple and the game isn’t exactly cutting edge. The way it works is the farther the door is away from where you started the harder it is to beat. You start the game off with a basic hammer, no armour, and no skills. As you complete more doors you get all of the above and more.

If you play the game smart and complete areas as you advance into them, the progression isn’t hard to keep up. There are no difficulty spikes, but the game does ramp up the chaos quite efficiently.

By the end I was at 4000HP and I destroyed everything that crossed my path. The reason I mention this, is that if you do skip around doors, you can become easily overwhelmed. The game doesn’t do much in the way of hand holding.

Fans of destruction and chaos can rejoice, as nearly everything in this game is destructible. You can squish and blow up everything and the game encourages you to for exploration purposes. One neat thing is that mostly everything you wreck drops something that has a use. While the inventory system is on the simple side, if you collect a bug antenna, someone needs it, corn seeds? Use it in a popcorn gun. Found a diamond? Upgrade your armour. You get the idea. The inventory screen is mostly there for informative purposes. I used it for the map on occasion but the game automatically equips the best gear. It’s nice that it is there, even if slightly unnecessary.

Combat is something I feel might be divisive in this game. One of the key differences between this and something like Bastion, is that Doors combat can come off rather cumbersome. It takes a good full second to swing your hammer and the primary way the game makes combat difficult is through being stunned. You have to time each one of your shots perfectly or get hit and watch the animation reset. It’s annoying at first, I will admit, but eventually you learn to master it. Ranged weapons help quite a bit when you finally get one, but limited ammo makes them a non-reliable method.

While the combat grew on me, there were moments I spent far too much time running from a bug that hit way faster than me, thus I couldn’t kill it. I had to back off a good pace, time my shot and squish. This is a tactic you will become quite familiar with by playing this game. A simple solution, I felt, would’ve been a dodge button or maybe a faster primary weapon that does less damage. One thing I did find curiously lacking, was different types of primary weapons. There are four different ranged weapons, three bombs, but only the hammer and its upgraded versions. Maybe in the sequel? Thankfully, the game does feature full controller support so this helps alleviate quite a bit of heartache.

Doors is always is giving you something to do and the game is incredibly addictive/fun. I found myself playing for hours at a time and with the secrets hidden everywhere, doors everywhere, there is always something to collect, upgrade, or a quest to complete.

The game lasted much longer then I expected and the over-world is bigger then is let on. This was a pleasant surprise, but nearing the end it does become a bit of a rinse-repeat scenario with doors, and upgrades. I got a solid ten hours out of the game but I might have missed a couple of things here and there. There is some potential for replay, but I think that is for people who are looking to 100% the game. There are some different dialogue choices, but I doubt it leads to any other outcomes.

Speaking of outcomes, the games door bosses and final boss are all really fun. While you mostly just end up bombing the hell out of them, they all look really distinct and feel epic in scope. The ending of the game is on point with the rest of the game, weird. I won’t give it away but the game sets up for a sequel and just ends. To be fair, it’s not like the game is about saving a princess or anything.

Other areas of the game are just unique as the games art style. The music starts off as a soothing and harmonious instrumental music and then breaks out into rock suddenly. The soundtrack is an area you could tell that they spent quite a bit of time developing and it shows. It’s fresh and weird, and I personally enjoyed it. You can purchase the soundtrack as part of a bundle or on the side, which is always great.

As I said at the beginning, combining two mediums leads to great expressions of art and to fun ideas, Don’t Open the Doors is no different. While the combat could’ve been more refined it hardly takes away from the overall enjoyment of this game. Doors transports you to a wonderful strange universe with fantastic visuals and adventure at its heart and soul.  If you love games like Zelda or Bastion, then this is right up your alley. Coming in at $9.99/£6.99, the game is fairly priced and comes with Steam Achievements/cards.

With that I say, go ahead…Open the Doors, and see what happens.