Puppet Fever — VR Charades with a Plethora of Puppets

Puppet Fever, from developer Coastal Byte Games and publisher Coffee Stain Studios, combines (deep breath) VR with Charades, Puppets, Twitch and local multiplayer: one player is given an assortment of props and puppets with which to act out a clue taken from a bevy of topics, for other players to guess at.

The build I had the chance to play while at Sweden Games Conference earlier in the year was already stable and fully playable, not least because — despite the game’s relatively recent announcement — it has been in a form of development since Coast Byte created and entered its formative state, ‘The Puppets of Moolgan’, into Dream Hackathon 16. From there the game was picked up by Coffee Stain, who then funded the developer’s trip to Stugan 17 (an isolation-focused accelerator), where the team of three refined the idea into Puppet Fever. 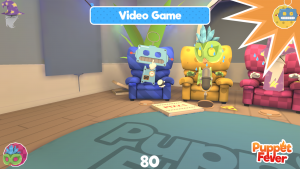 Puppet Fever is exceptionally fun, a kind of party-game fun which rarely transitions over from goofy board games to computer games. This fun comes both from the creations and from the knowledge of a restricted toolbox for the performer to create with. In Pictionary we know they have a pen and some paper, in Rapidough we know they are limited to a couple of dollops of crafting dough and in Puppet Fever we know they’ve got a dozen puppets, and a dozen seemingly random items. More than enough to cover the turn of phrase, or job, or movie which players have to depict using them.

Due to the nature of the game it only, thankfully, requires one headset, with other players able to use controllers to buzz in. Input for taking guesses isn’t an on-screen feature, with local games requiring players buzz and then shout out their answer once confident. Online multiplayer, via Twitch streaming, is something which is both completely possible and planned for Puppet Fever; with the service’s chat replacing local play’s shouting.

I sat down with Coastal Byte Games’ Art Director, Rasmus Jensen, and the studio CEO, Marcus Kellner, to discuss how the team were looking to handle the translation of Puppet Fever — as it stood, the game was running in English on the show floor and multiple other languages were confirmed for play. My reason for asking was the intriguing subject of idioms and turns of phrase which featured in the game. As anybody who speaks, or has tried to learn, a different language will know, these are sometimes peculiar and hard to relate to. 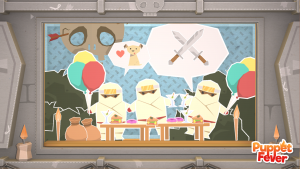 The idea of featuring them, Marcus explained, was a relatively early one, and due to the symbolic nature of the puppets, quite simple, too. After all, on reflection, all of the strange British ones about birds, pudding, eggs and milk can simply be played out with puppets of the cement nouns — leaving assumption to the players.

Another thing we discussed was the remaining milestones in the game’s roadmap, since Puppet Fever‘s expected launch is in early 2018. Rasmus explained that the core of the game was finished and they were currently adding in more content as well as working on a system which would screen-grab players’ creations.

As VR becomes increasingly more accessible due to decreasing price, it’s undeniable that games like Puppet Fever — with their approachable play and potential with online communities — will be driving forces in the technology’s adoption.

Puppet Fever is expected to launch early next year for Oculus Rift and HTC Vive. Other platforms may be confirmed nearer to the time.