We can now watch our football play-calling abilities unfold.

At an initial, cursory glance at the players on the field, someone might instantly be transported back in time to memories of Tecmo Bowl. However, Pro Strategy Football 2019 is light years ahead of that ancient, basic game. Being a yuuuge NFL fanatic, I immediately started setting the game up to be as NFL as possible. More on the massive customization abilities later. My first ‘real’ PC football game was Tom Landry Strategy Football, for my Amiga 1200. Kerry Batts, the brilliance behind PSF 2019, actually built that game — while working with Tom Landry! Growing up in Texas, and being a life-long, die-hard Cowboys fan, I probably would have passed out just meeting Tom Landry — much less actually working with him on a game. I spent hundreds, if not thousands, of hours playing it. Not only that, it was <muffled> years ago.

Fly route to 2018 and he’s now made Pro Strategy Football 2019. People (like myself) have been extremely limited throughout the last ten years (at least) for an in-depth and actually visual pro football game. The hardcore games like the Front Office Football series, while great, are text-only. You run (or simulate) every play and there are a locker-load of spreadsheets, but the information/outcome you’re given after each play is text — so you must use your imagination and ‘see it in your head’.

Not so with Pro Strategy Football 2019. This is made by one guy (Kerry Batts) so it’s not *cough* that conglomerate’s level of graphics, but the gameplay and play-calling are superior, in my opinion. Whether you play at the Basic setting or the Expert level, you get to witness what all the gears in the background are churning out.

And there are a lot of mechanisms at work.

Sure, I played a little at Basic — I might have made it to a quarter of the first quarter. Obviously, my main interest was in Expert. Let’s see what kind of engine it has and, mostly, how flexible the play-calling is. On both offense and defense, the number of tweaks you can make to play-calling is staggering. Simply setting the formation is one tiny part of calling a play. Everything I talk about from here on out is obtained by using Expert level.

While you’re on defense, you can choose formations ranging from Goal-Line or Short-Yardage — all the way to Prevent. Pro Strategy Football 2019 even has a basic breakdown of what works better versus run or pass. The only offensive information given to you is what set they’re in. Of course, there’s a huge difference for what you might call, whether they’re in a Power-I Right or a Shotgun with four wide receivers. Common knowledge tells you to always look at down, yardage and what the clock’s doing.

You have a choice of the three basic coverages: Man-to-Man, 2-Deep or 3-Deep Zones. There are seven line shifts, ranging from ‘normal’ to even Stunts — provided you’re not in a 3-4, of course. The defense you choose also dictates how many blitzes you can run on a specific play. You control each non-lineman player individually and whether they blitz or not. There are also buttons to Blitz All or Blitz None. If you’re in a 3-4 watching for a pass and you blitz five, you better hope somebody makes it to the quarterback — or, as in real football, you’ll get burnt to a crisp with a skeleton secondary.

Instead of blitzing, you also have the option to use your backers and secondary to double-team receivers as well. Some plays will automatically do it for you, but you can alter most plays in any manner you choose. So, from the play called, if you’re automatically double-covering the wide-receivers, you can use a linebacker to double a back as well if you choose. When you click a controllable player, a little menu pops up showing all your available options.

Finally, there are more run keys than men present in the backfield. The safest is simply a normal run key. However, you can also concentrate on the flow — which is a little more dangerous. While excellent if you’re correct, it’ll hurt you if you’re not. If you’re living on the edge and you (think you) know exactly who’s going get the handoff, you can key a specific player. Have mercy on you if you guess wrong, though.

Even with all the available options you have defensively, when you’re on offense is when things really get complex. The first thing you’ll want to do is pick a formation — again, with some better for running, some better for passing. There are twelve ‘basic’ sets. The flexibility of Pro Strategy Football 2019 lets you adjust virtually all aspects of each of the power positions. Rushing plays are mostly straightforward but do give you alternatives. Obviously, when calling a run, the computer will automatically give the ball to the halfback. However, changing ball carriers, like everything else, is simply a quick click away. Rather give it to the fullback? Fine, just give him the ball. Want an instant reverse? Just give the ball to one of the ends.

Passing plays, though, are the highlights for me. I can control all of the routes of each power position. I can set up my own plays and keep them. I set who the primary receiver will be. The quarterback will obviously make the best choice once the play is running, regardless of my choice — which is absolutely great because I don’t want him throwing into double-coverage just because I picked the lesser of better options. On Medium passes or longer, I can keep players in to block, rather than sending them all out on routes. Most games don’t have that level of control. This is merely scratching the surface.

Throw into all of this the mix: whether to send someone in motion; who to send in motion; whether it will be play-action or not, etc. Can you send two receivers to the same, approximate area to force (an illegal) pick play? If you can, will the refs catch it? 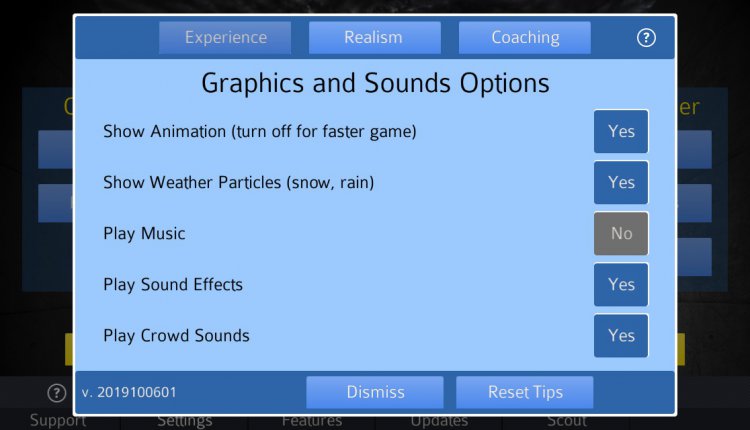 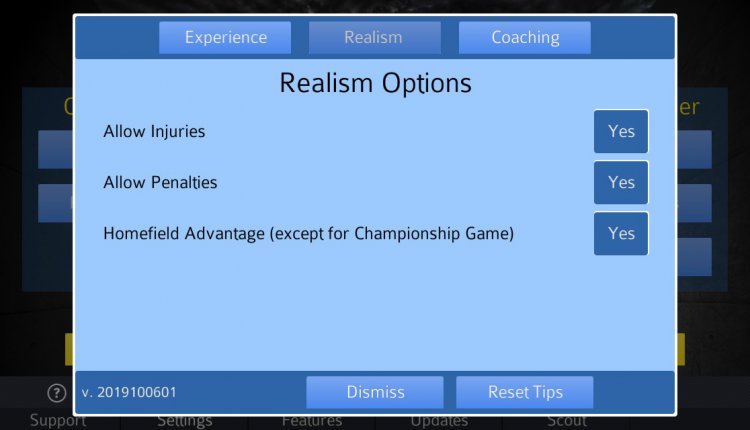 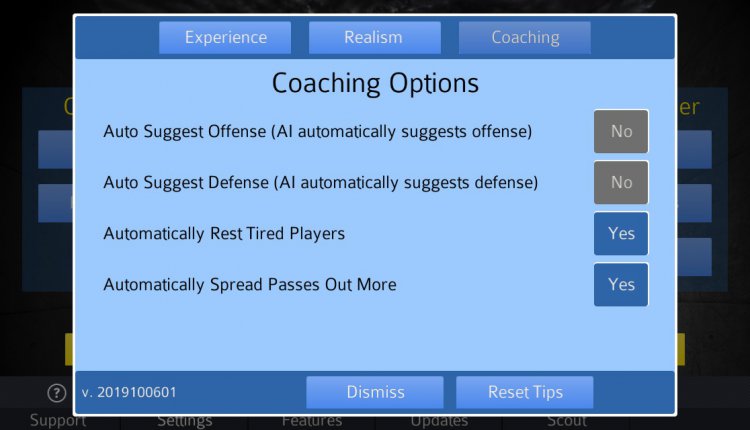 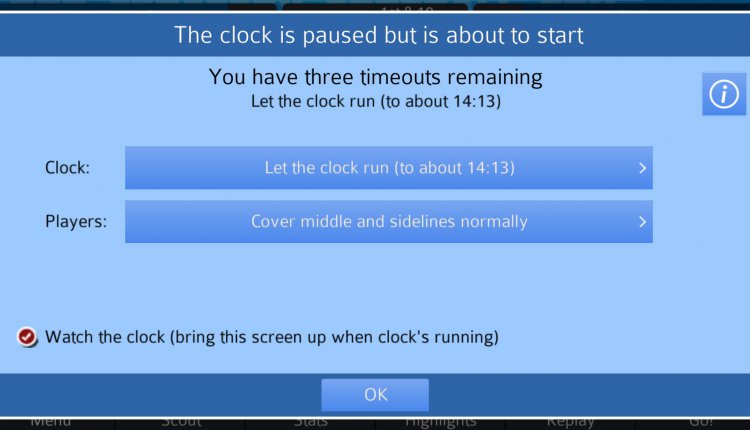 Will show you the clock every time it's running. 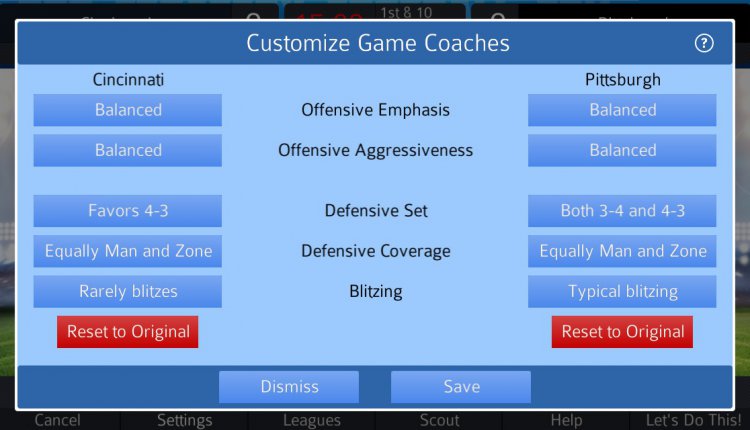 The customization possibilities in Pro Strategy Football 2019 are completely insane. Those previously listed are just a few of the rules. The outstanding part is being able to tailor the leagues, uniforms, fields, etc. to your own personal tastes. You have complete control over the rosters, player stats, home and away uniforms, field and endzone logos — hell, even the weather. You can make virtually any team from any era look exactly like you want them to. You can make any teams and leagues from completely fictitious to college to NFL. Then, whatever you create, you can share them with everybody else. One of the first combinations I downloaded was the 1970 NFL to use with modern uniforms.

Finally, the AI is tough, but never cheats. If some crazy play happens or you miss an extra point, well, it’s football. I have been completely blown away by Pro Strategy Football 2019. With all the tweaks and tools available, I can create essentially any kind of football game or league in any way I want it fashioned. I’ve read a lot of people really enjoy watching CPU vs. CPU games as well. I’m just too hands on for that, but you never know, I might fire one up just so I could yell at the screen, ‘Why’d you call that?’ or, ‘I would’ve gone for it on fourth and one.’

One final note about one of the positively best aspects: the AI watches and learns how you play! So that flanker reverse on third and two isn’t going to work much after the first time or two you call it. 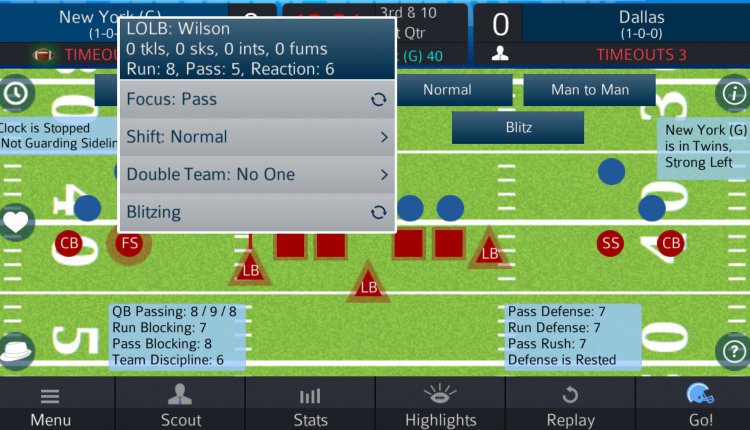 Going to blitz my LOLB. 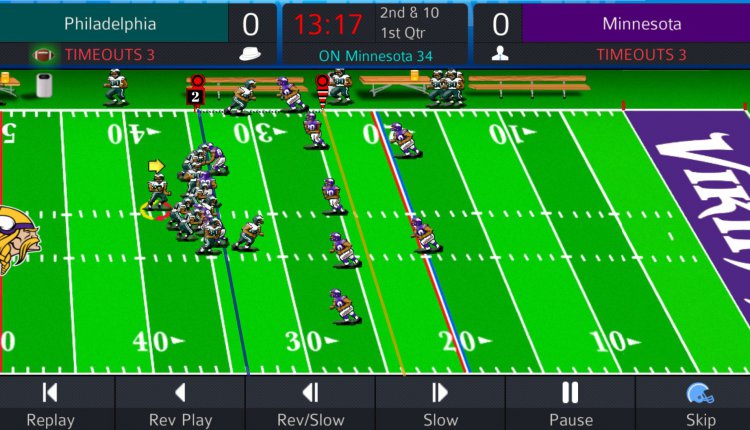 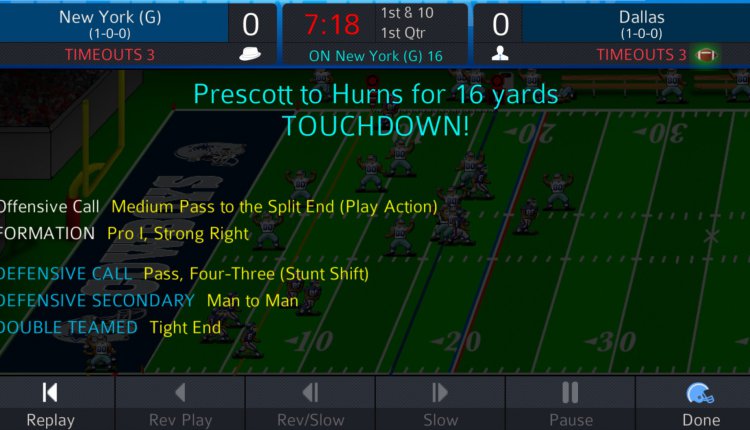 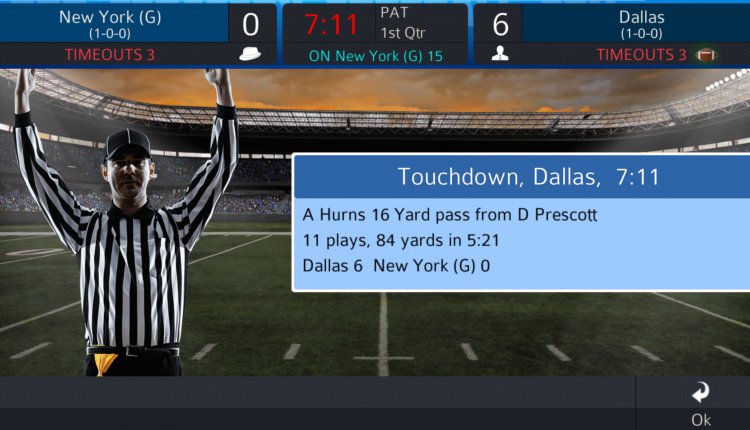 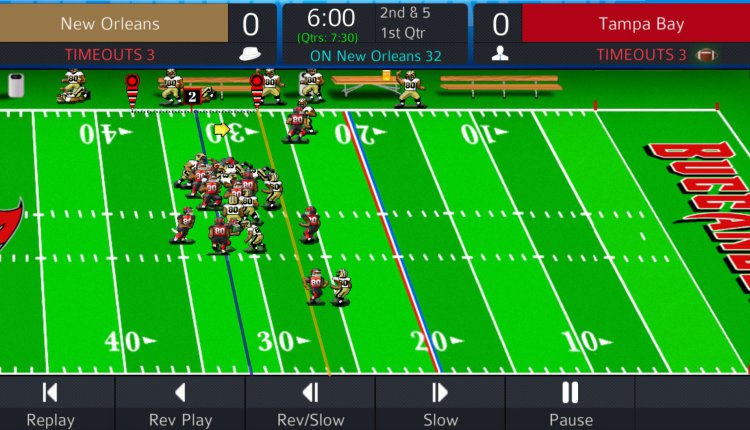 Can adjust quarter lengths - this one to 7:30 each. 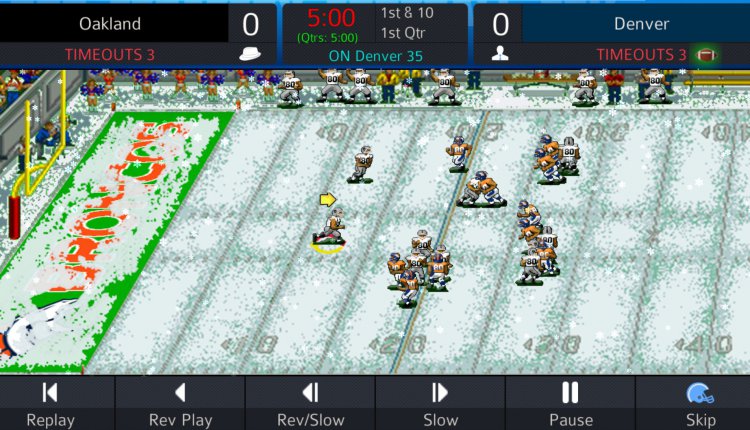 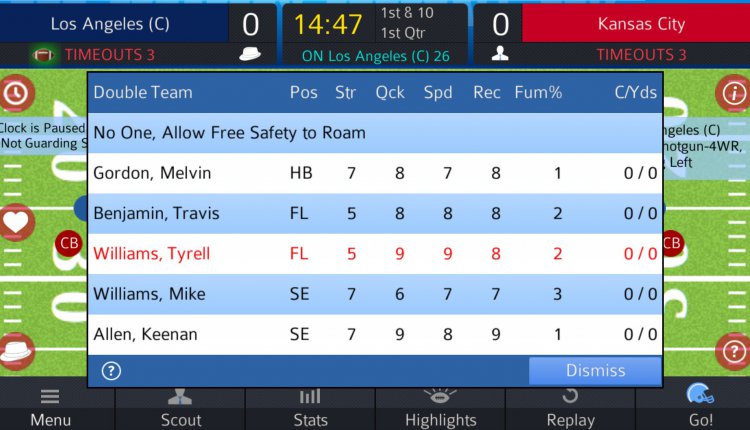 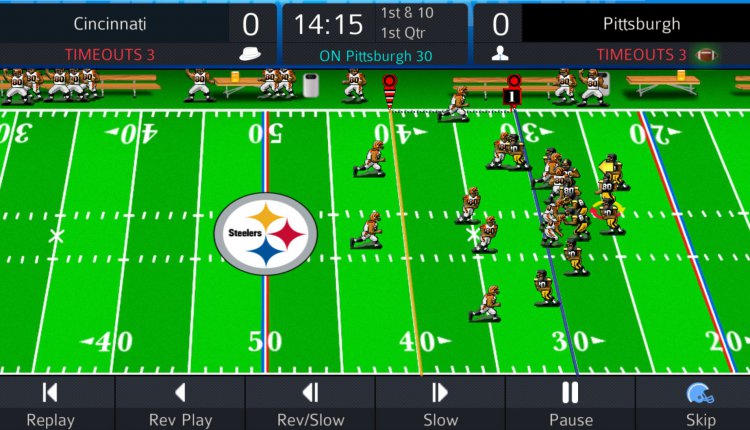 Rivals going at it. 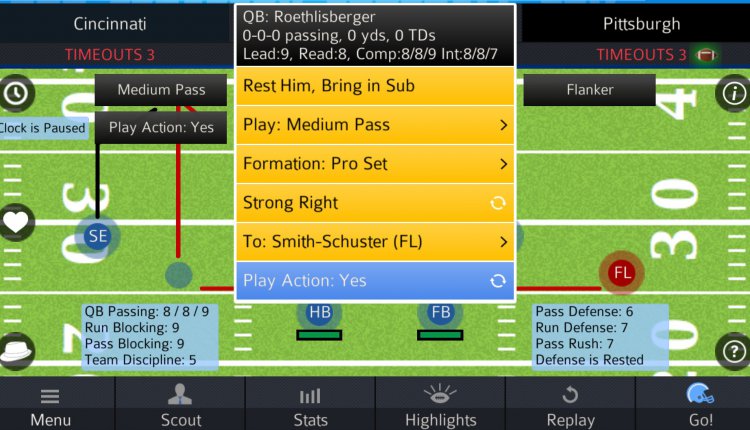