Hue is a puzzle platform title which plays with colour and perception to build a unique and clean gaming experience telling the story of a boy trying to find his mother.

B3’s presence at the recent PC Gamer Weekender didn’t manage to breach the crowd around Curve Digital’s corner until late on the Sunday. When we did we were met by a really fantastic collection of titles including the wonderful Hue. 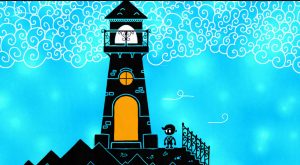 Hue is a puzzle platform title, one that starts in a simple world of black and whites; this is quickly changed however as the titular Hue heads off to try and find his missing mother. It’s not a simple smash and grab operation however, as it turns out that she had discovered that the world should actually be a much brighter place, and she had created a ring which allowed her to start bringing these colours into the world. As with all genius inventions there’s always a troublemaker nearby, and the rather dull sounding Dr Grey lashes out and steals mum away, then sets about a sinister plan – clearly an extremely dastardly one revolving around colour. I say this based primarily around the fact that every time anyone at the booth talked about him they pre-empted his name with EVIL.

The developers managed an excellent job of introducing new mechanics to the game, with my 40 minutes of the game ending with 4 of the 8 total colours unlocked. The puzzles had already started getting quite tricky, certainly enough that I was starting to grin in a stupid, smug fashion as I completed the later ones. 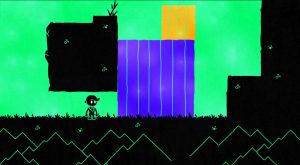 To describe the game as minimalistic is a bit of a sin (it’s cool, I just checked back, I’ve not done it so far) because we’re not talking about a title which features linear, plain tunnel levels as you journey from puzzle to puzzle. Each screen that I saw featured designs etched in the walls, shapes hovering in the sky, and chains and other decorative items littering the ceilings and floor. Better still, the game is far from silent – there’s a solemn piano clattering away in the background, the aforementioned decorations rattle and chatter, and Hue’s mother reads her notes to you as you journey further from your town into the network of levels.

Heading back to the core mechanic of the game, the colour wheel, it’s made up of eight different colours, and as you select a colour the background of the world flicks to match it. I did say this was all about perception didn’t I? I only ask because, when an item matches the background it is invisible, and in Hue that means that the item no longer exists, it can be passed through. This starts out simple, pass through a block to get past an obstacle. Five minutes later and you’re jumping across ravines switching colour mid-jump in order to pull a platform back into relevance. Thankfully time slows down as the wheel is being turned, and in those slow-mo moments you can also see all of the blocks in existence, as the world flicks back to it’s natural state. 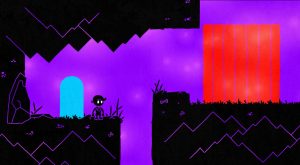 This translates into puzzles in multiple ways – for an example, an early one had me running down a slope. Simple? Above me rocks were held by a platform, below me another platform protected me from spikes, ahead of me another platform – the same colour as that above – blocked my path. The solution was simple, clear the path and release the rocks. This is just grand, but for the next section – with rocks tumbling after you – it’s laid out the same, so you have to be careful not to clear the colour you’re standing on, or heading towards. When you give up trying to be cunning, and just knuckle down to the task at hand it goes by just swimmingly. However, at the bottom of that hill, as those rocks tumble into oblivion, there’s a jump onto platforms carefully spaced over a chasm in a set colour pattern – at this point you rapidly learn to use the slowing down feature of the colour wheel, as you change the world mid-jump.

Over the last few years there’s been a massive celebration culture around the way that classic Megaman titles introduced people to enemies, and new mechanics via a safer space before the danger encroaches – Hue does this with puzzles in a fantastic way, with a vertical climb, or flat platform crate moving puzzle getting you used to your new abilities before vaulting you into rooms filled with spikes, laser beams, and crumbling platforms.

It’s a few weeks from release, and due to the fact it’s developed on Unity it is set to launch on, to quote the stand attendee, ‘practically everything’. I’m really looking forward to it, and I think you should be too.