From Advanced Wars, Command & Conquer, XCOM,  to Starcraft, I am familiar and love all types of strategy games. So when Codex of Victory was assigned to me I was rather excited about the big turn based battles and hopefully big robots. Developed by the team behind Majesty 2, Warlock and Elven Legacy; Ino-Co Plus, this is in very familiar territory when it comes to the genre.

For the most part Codex of Victory does meet all of the needs and desires one could want in a strategy game. Despite still being in Early Access the game feels rather well put together and feels like a complete game. All I want is more giant robots, but that’s a personal thing. 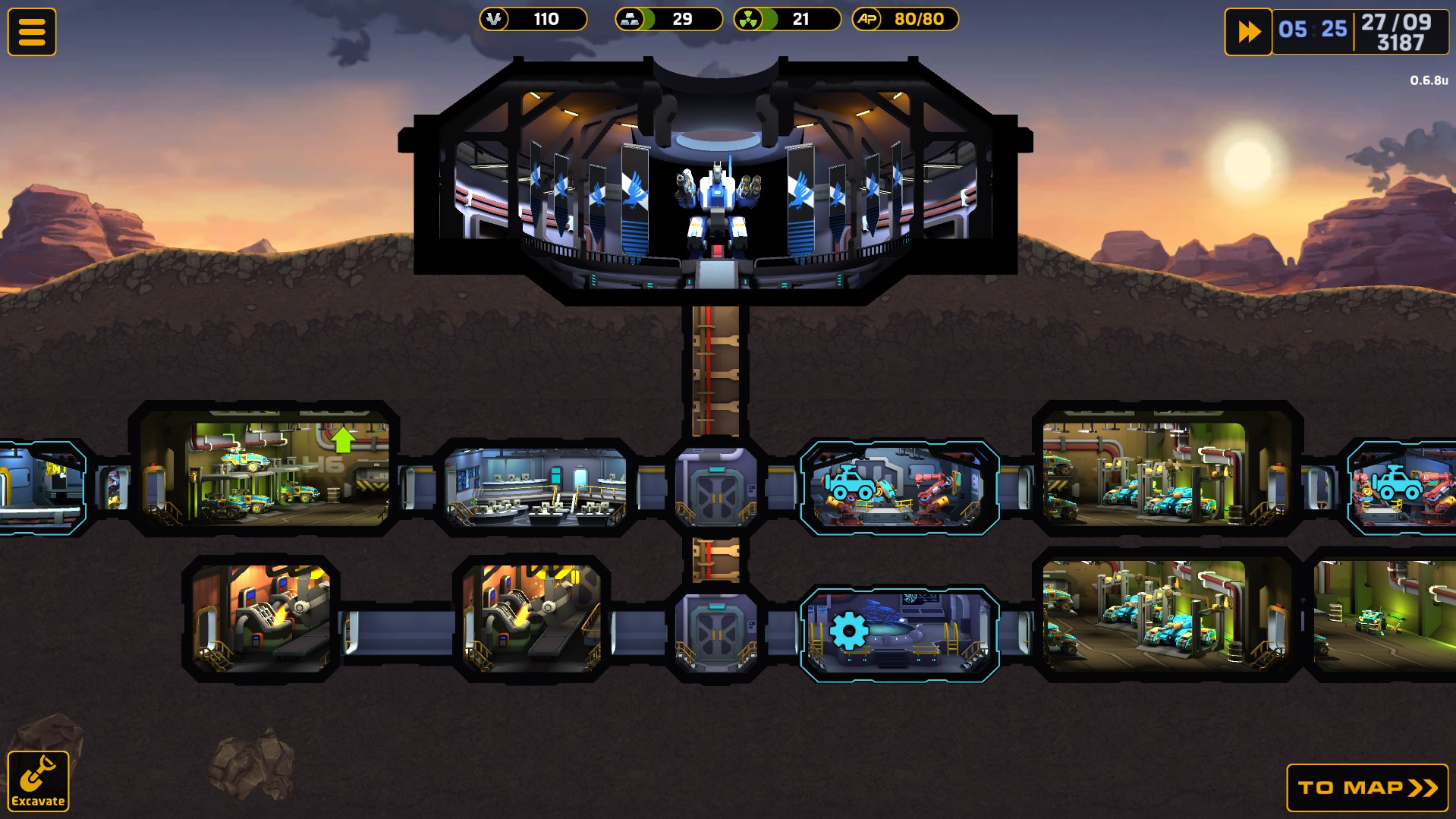 Now everybody has different takes on what makes a good strategy game. Some people crave troop customization, high difficulty, expansive twitch based strategy, or, my favorite, putting huge giant armies against each other and watching the chaos unfold. My point is, that the strategy genre comes in many forms and flavours. Codex of Victory borrows from other great games and blends them into a deceptively simple title that is easy to approach and play.

Let’s talk story. Some royalty in the future gets in trouble and you save them. They make you a “Lord” which is basically the equivalent of XCOM’s “Commander” and voila! You now have a base and an army. I will be honest, the story isn’t the games strongest point right now. There is some nicely designed character illustrations and small attempts at a story but I didn’t find it all that memorable. Basically, you have to conquer the planet in the first act and then move on to conquering other planets in the sector in the next.

Moving on to the good stuff, we have base building up first. Anyone familiar with XCOM is going to be instantly at home with this mechanic. You start with a basic set of rooms that generate resources, build troops, modify modules, research upgrades, etc. You dig for rooms and expand more and more as you progress. The base building part while enjoyable does seem to lack any tactical value beyond just getting you ready for the next fight and altering troop composition. One thing I did enjoy was the modules system in the game, which enables customization to a degree. You can add hit points at the cost of damage, add a range boost but deployment cost more or baseline upgrades like a plus to crit chance.

Sadly, these little customization items are only found after completing levels and are type based. Meaning that it effects all units of that kind instead individually. It could be argued, that individual level of micromanagement isn’t the games style. Codex of Victory is more Advanced Wars in nature, where everything has a set value, damage, defense, health, etc. Don’t get me wrong, I enjoyed the amount I could alter my troops, I just wanted more ways to make them my own. 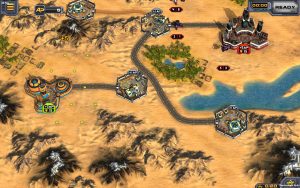 Speaking of unit types, this is where I do have a bit of gripe. Codex has more of the run of mill type of troops then I would’ve liked. I wanted and expected more Mecha-style combat, but  instead got futuristic themed versions of tanks, artillery, and attack choppers. There are some cool Mecha in the game, but not enough for my taste. So, while the design of the units themselves is rather well done, it rarely caught my attention, and by the time the enemy units start to get interesting, that’s quite a way into the game — so, it was a little underwhelming.

Like I said before though, the game graphics are good. One thing I will give kudos to the developer for is the ability to zoom in more than most games allow. You can zoom in on the base building, combat, and units themselves and they look rather detailed. The carnage itself is also visually pleasing, as things explode, energy sizzles, and missiles zoom. An area that could use improvement is the maps themselves. The level design itself is rather simple, and the map textures aren’t really anything extraordinary — it’s not a big requirement in strategy games, as you mostly just focus on where your troops are but it could’ve been more pleasant on the eyes.

The nitty gritty of combat is hexagonal movement using the AP system. The AP system is the be-all-and-end-all of the way battles work. When you first start a level you are handed a limited number of AP points to use in summoning units into the field. Usually you can bring either five light units, two mediums, or one heavy unit. It’s rather limiting but it also depends on the mission itself. Once you pick a couple of starting units the AP act as a means to bring more units onto the field, move units, and attack as well. You gain more AP per turn by capturing control points that add to your total. 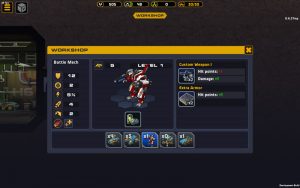 The AP system for me was a bit of hit and a miss. I loved the idea of having to balance all three aspects of troop deployment, movement, and attack but it become increasingly frustrating as I got deeper into the game. The enemy usually starts out with a cadre of troops already on the level and can summon even more once the combat starts. There are some levels that suggest avoiding enemies but this is nigh impossible due to the way movement works and the enemy is extremely aggressive. Difficulty spikes happen on occasion and it just feels more like a slug fest than tactical combat. This is fine by me, and there were some levels that were chaotic as hell but rather enjoyable as everybody exploded.

Simply put, because the way the AP system works it feels like your enemy always has the advantage. Add on the fact they also can add enemies to the field and are a couple of tech levels above you, and things can become frustrating. Just don’t get attached to your troops. There is some variance in mission goals that I did enjoy, and the troubles with the AP system are alleviated. On occasion you might find the enemy just sits there and is happy to let you stack AP, which is nice. Ultimately, balance is all that is required here and that is what Early Access is meant to do. All the issues with AP system are manageable with a couple of tweaks here and there. 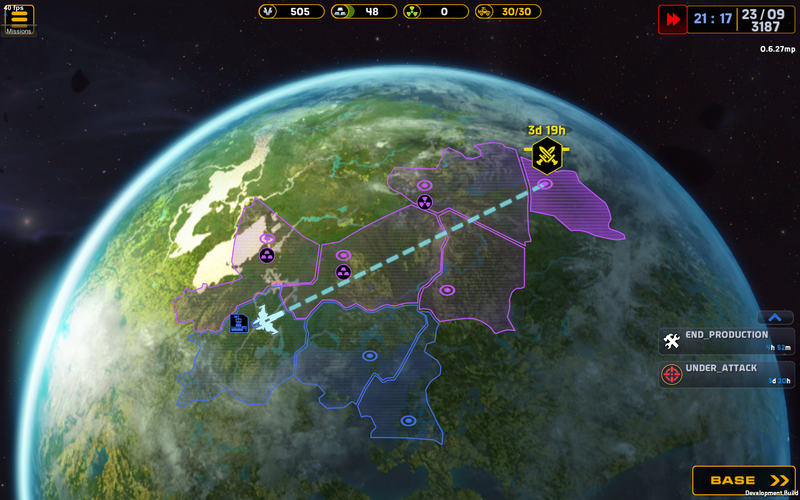 Campaign aside, there is also PVP in the game. This area seems rife with opportunity as this lets you create your own custom set of troops without all the confines of the base upgrades, resources, and such. Same idea is applied here. You are given a hundred points to divide among a number of troops, upgrades, etc. Then you take them into battle and see the better army win. While I didn’t get to experience the PVP aspect too deeply, I did like what I saw here and look forward to what the developer adds to it.

There is more here to discuss such as music, amount of content/innovation, and replay value but as the game still isn’t quite finished yet, time will tell on some of those.

Like I mentioned, Codex of Victory brings good ideas together and makes them its own in unique ways. The game has plenty of potential and will definitely please strategy fans. As of this writing the game is sitting at $9.99/£6.99 and currently features Steam cards.

Until next time, ready up and good luck Commander!