Whether you like it or not, there is no denying that Minecraft was, and still is, a phenomenon — as such, we knew we were destined to see many other variants. Some started as a direct ripoff and evolved into something totally different, like Fortress Craft, and some like Creativerse just added further elements to the vanilla game, adding machinery and other such things. Some even dabbled with the addition of RPG elements and based themselves in massive franchises, like Dragon Quest Builders. Pretty much all of them upped their graphical fidelity beyond the blocky voxel landscapes of Minecraft, but none have ever caught my imagination quite like Portal Knights.

I originally bought Portal Knights in early access on Steam, just because it looked cool and was cheap because of a Steam sale. It’s one of the few games I have bought without knowing anything about it. After 121 hours with it, I’m glad I did, and am now excited that I can take this game with me wherever I go. And, as most of my time with the game was when it was still in early access, I found a few surprise changes here as well. 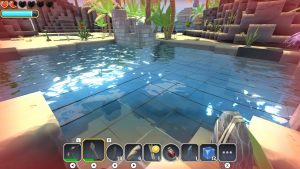 Portal Knights takes the Minecraft formula, breaks the world into smaller, distinct realms, and adds RPG elements. You start out by making your character, who is overly cute-looking and reminds me of the characters in the My Sims games on the Wii. You choose your gender, then the looks of your character. Interestingly, there are no limits to the options by gender, so if you want be a girl with a massive beard, go for it, and more power to you! Classic RPG staples of Warrior, Ranger and Mage are your options for class here, and these set your starting stats for your character. Once character creation is complete, you then create your World in one of three different sizes. Worlds are, of course, procedurally generated, but the world is not one big endless world and is instead made of smaller, distinct, biome worlds.

The general gameplay loop of Portal Knights is fairly standard stuff for the genre, but tightly integrated, and it works incredibly well. Upon starting your game, you materialise on the landing pad for your first world and you can get started. On first play, Portal Knights prompts you through a few opening quests, helping you with the controls and crafting mechanics in the game, and details the titular “portals” which link the worlds. Crafting starts off fairly simple, with a workbench you find in a run down building in the first world, but you soon discover that crafting more complex items actually requires different crafting stations, such as a furnace or anvil. Each of these can also be upgraded with the resources you find, opening up more and more items to craft as you make your way through the game.

To traverse the different worlds, most worlds have at least one portal on them, which will initially be broken and have to be built back up using Portal Blocks. These are crafted (in your hand, no need for a workbench) from portal shards, which are dropped from enemies and also when mining certain resources. Build the portal with six of the blocks and head on in to continue your adventure.

Portal Knights handles progression in a fairly linear fashion in most regards, but elements of that progression are also very much in sync with each other, with more and more opening up the further you get into the game. Enemies get harder as you move among worlds, with the world number also being the level of the monsters, so to keep it even, it’s best to be a similar character level to the level you are on, or you may find the fights become rather tough.

Resources work in a similar fashion too, with higher-level resources only appearing in later levels. As mentioned before, different realms hold different resources and these can be seen from the map screen. This has the bonus effect that if you are low on a certain resource, you know exactly where to go to find what you need, not having to explore an infinite world. The next level of resource does not start to appear until you have pretty much built all you need to from the previous tier, so you get a feeling of never missing out on anything. Even the portals themselves change over time and require different colours of portal blocks, meaning more shards are needed each time.

As you level up your character, along with raising your standard stats, you can also select talents, first at level 2, then every five up until 30. These allow you to pick certain specialisations, such as increased damage with specific weapons, or specialise in particular types of magic. The best thing about these is that they are never locked in, so you can go back and change them as many times as you wish, even in the middle of a fight. 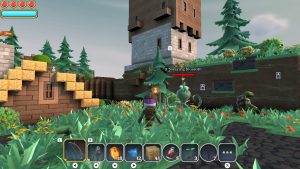 Combat is handled in a fairly standard manner. The left trigger locks onto the nearest enemy and the right trigger attacks with whatever you have selected. You can beat someone to death with a roll of linen cloth if you like, but I would recommend an actual weapon of some sort. The jump button, while locked on, makes you dodge-roll in whichever direction the stick is currently facing.

The worlds themselves are wonderfully varied and the theming on them is great. You get lush green forests, bare deserts, snow-covered tundra, open plains and water (this was new to me, as there was no water when I last played the PC version, and it looks awesome). You will also find various NPCs who can either give you quests or be traders from whom you can buy and sell. These can be handy for resources in a pinch and can empty your inventory of unneeded stuff while out adventuring.

Quests are rather simplistic fetch quests, with you finding X number of a certain resource, or crafting a specific item for the quest giver. These all speak in a wonderful nonsense language, fitting to their appearance. Each world also has different buildings; some have friendly NPC houses, ruins, mines and dungeons. Dungeons are always worth exploring, as they usually contain some good loot, furniture and interesting blocks to mine — even portals. 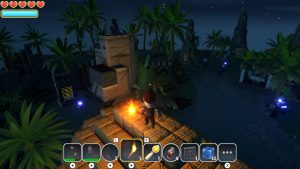 Monsters draw from standard RPG fare, ranging from the ever-classic slimes to skeletons, orc-type creatures, walking plants, maggots and flying eyeballs. The same enemies do appear in the various biomes, but all are subtly changed to fit the theming. Night time presents a further challenge, as harder, more unique monsters appear wandering around the map. Hollow Knight bosses also appear throughout your adventure, usually gating of the next stage of process. These appear in their own worlds, built specifically for the fight. The first I encountered was a giant version of the maggots which spawns the smaller maggots. The boss fights usually revolve around some sort of gimmick specific to that fight — he Maggot demands that you dodge until it gets tired, and vulnerable to attack, and another boss involves hitting things back at them.

I would like to let you know about the endgame, but even with 121 hours on the PC version, I have not seen it. I hit about level 20, and got to a similar-leveled world, but started to concentrate on building. As much as RPG elements make up a large part of the game, it is still at heart a Minecraft clone, and so building forms a large part of it. There are a wide variety of blocks to build with, but also a great amount of doors, windows, furniture and knick-knacks to decorate with. There is even a specific crafting table, the drafting table, available just to create these items. You can build pretty much anywhere, and you can even change your home world, so you may want to just play through the game a bit first until you find somewhere to lay your hat and call home. Or just make a new base on every world if you so wish.

In docked mode, the Switch handles this game beautifully, however only runs at 720P. Apart from that, I did not notice any major differences between this and the PC version. Handheld mode, though, seemed to struggle at points, and there were a few framerate drops, but nothing game breaking,. Overall, it’s a great port, and something I am very excited to be able to take anywhere. Who knows? I may even finish it.

Portal Knights is available now on Nintendo Switch, PS4, Xbox One, and PC.