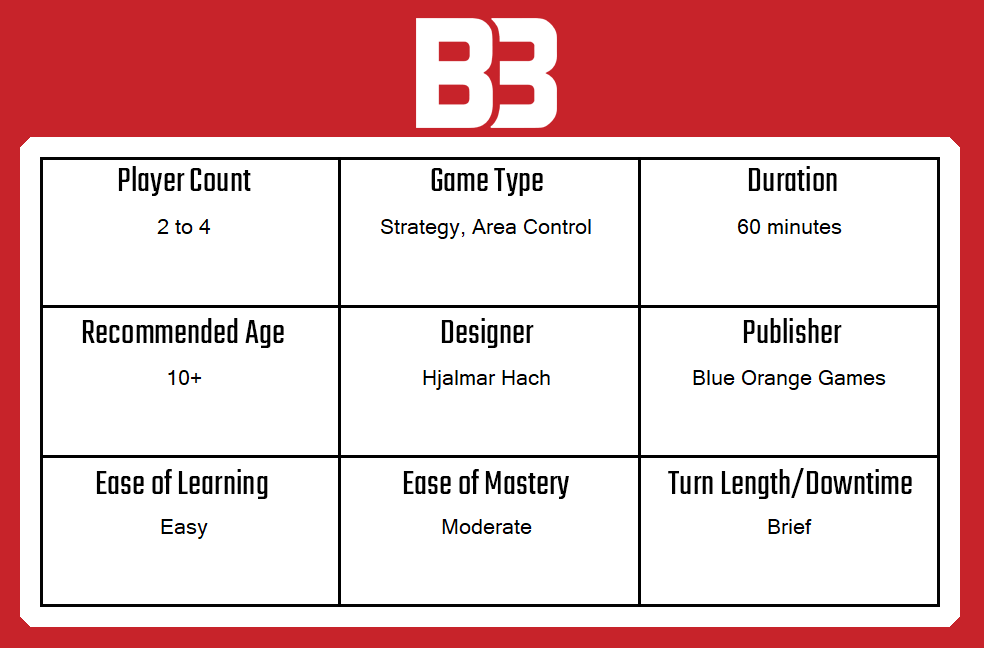 Readers of a certain age will remember an old Prudential advert from 1989 that ended with a rather satisfied looking man quoting “I want to be a tree.” Well, if the chap in question still feels so inclined, he could achieve his dream by playing Photosynthesis, which is a rather beautiful and surprisingly competitive game from Blue Orange Games. Two to four players will each be represented on the board by a particular species of tree, but the competition for sunlight and better quality soil can lead to all kinds of cutthroat behaviour.

In Photosynthesis, each player takes on the role of an arborist who is particularly focused on ensuring that their preferred species of tree becomes the most prevalent. This is measured more-or-less directly by gathering sunlight, planting seeds, growing trees and then harvesting trees based on how fertile the soil they grew in was. The closer to the centre of the board a tree is, the more valuable the soil it is growing from will be — as indicated by the number of leaves it shows.

Light points will be collected and spent during play based on how much sunlight each tree receives, which is the direct result of how big a tree is and whether or not it is in the shadow of another tree. Small trees collect one light, medium trees collect two and large trees, you guessed it, collect three light. The amount of shadow that each tree casts on the board is also equal to the number of light it collects, so a large tree would block the sun from any smaller trees that are in line up to three spaces behind it.

The mechanic that makes Photosynthesis most interesting and which adds a realistic touch is the fact that the sun moves with each round of turns, so well placed trees will gather lots of light, but it’s still likely that as the sun moves, their access to light will lessen because of trees that were previously behind them. Adding new seeds and upgrading trees from one size to the next costs light, but the only way to score meaningful points in Photosynthesis is to pay for them to be harvested, which removes them from the game but allows the player to take a point scoring token.

The player who has the most cumulative points (with a small bonus for leftover light) at the end of the game will win, and each game lasts for three (in the short game) or four (in the long game) full rotations of the sun around the board. This effectively means that there are either eighteen or twenty four turns for players to collect light, plant seeds, upgrade trees and then harvest them, so every decision needs to be made carefully and each tree should be positioned to make as much light as possible — whilst, if possible, denying it from your opponents. 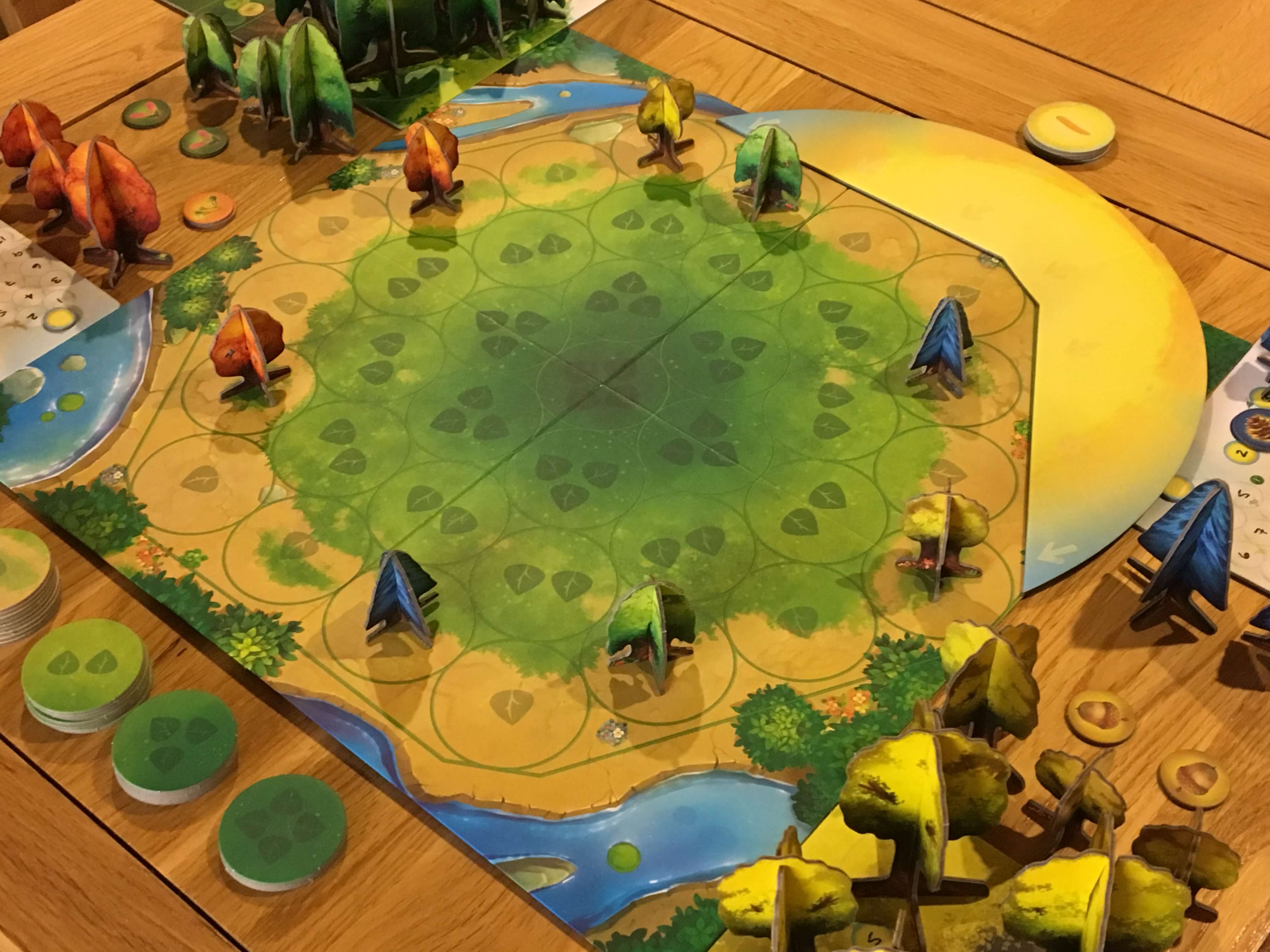 It should come as no surprise for me to mention that the overall quality of board game components has increased massively in the past ten years or so and in particular, since the current Golden Age began in around 2015. With that said, it’s becoming increasingly challenging for designers to make games that stand out both visually and mechanically at the same time. Photosynthesis perfectly blends a gorgeous, eye catching aesthetic with a theme that is almost entirely unique. Better still, nothing about how it looks compromises how it plays — there is no style over substance here.

The components are relatively simple, although there are a lot of them. Each player has a handful of trees in all sizes, plus six seed tokens. There is a personal player board for everyone, as well as a central board and a fold out sun that fits very nicely around the edge of the central board. There are also fairly hefty stacks of scoring tokens that represent each of the different kinds of point scoring spaces. There are a few other bits and bobs like the light trackers and of course the manual, but I’ve covered the most material elements.

The first thing you’ll notice about Photosynthesis once you’ve laid it out on your table is how diverse the four different species of tree are. This is impressive enough with the trees laid out in their own ranks on the individual player mats, but once the board is populated in a four player game, Photosynthesis is truly a thing of beauty. Assuming you want to look closer (which you will) then not only is the overall effect gorgeous, but so too are the small touches. The squirrels and birds that inhabit this cardboard forest peek out at you and every tree seems to have been individually painted. 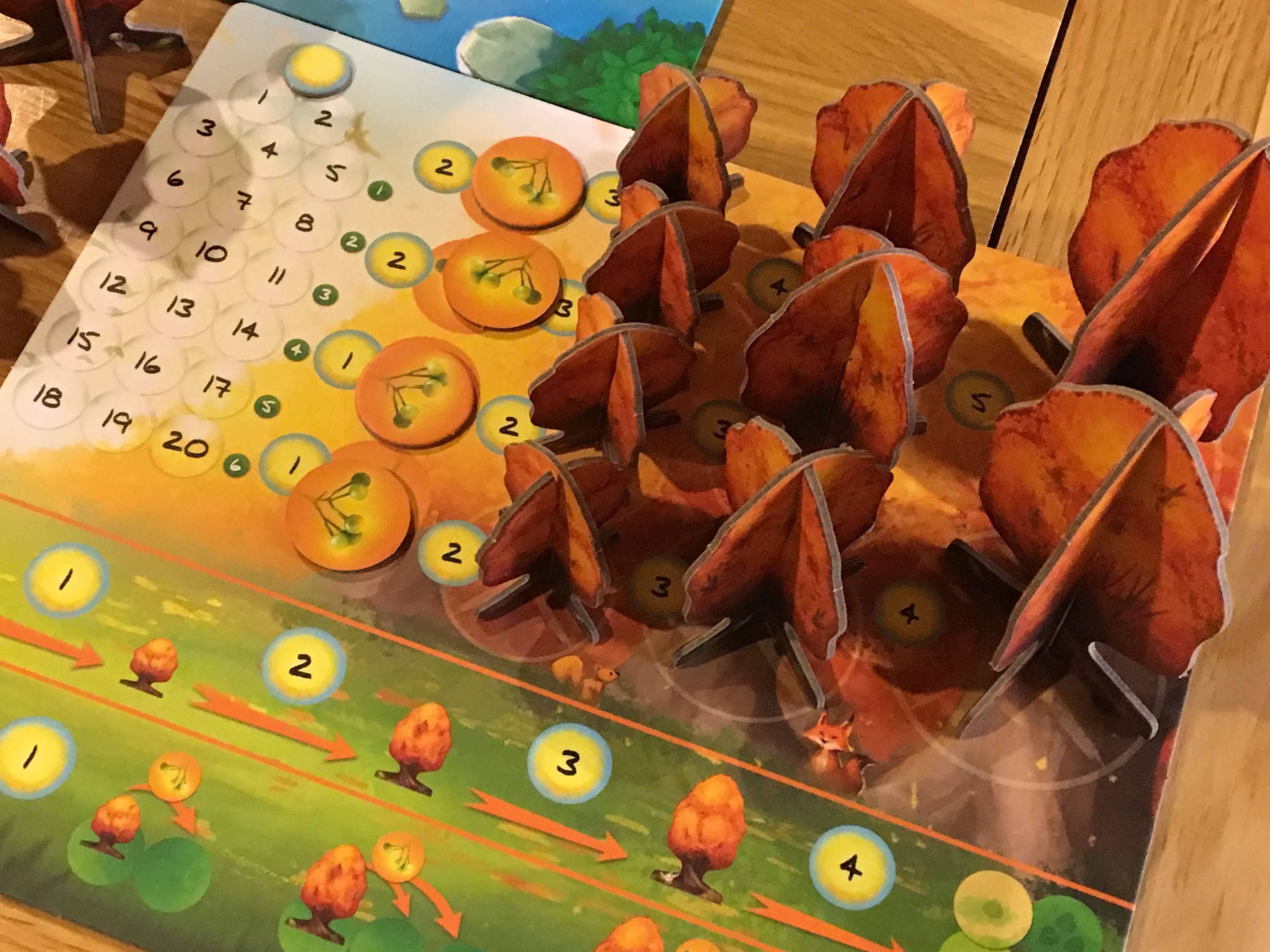 Although Photosynthesis ultimately proves to be fairly straightforward, with lots of hints about the cost of seeds, upgrades and so on printed on the boards, I did find it oddly challenging to get my head around at first. The key to unlocking this conundrum was coming to terms with the idea that each player begins with two trees on the main board, then a number of trees on their player board and, finally, seeds and trees of each type that sit in the available area. Players may freely take seeds and trees from the available area, but to put them into it, they must be bought from the player board.

Honestly, this just felt weird to me at first, but it soon becomes second nature, although there is another nuance — when a tree is upgraded to a larger one, if there’s no space for it to return to on the player board, then it actually goes back into the box meaning that it can’t be used again. This isn’t a major problem with the small trees, but it is something that needs to be considered with the midsize trees because they are in shorter supply overall. In any case, once it becomes less of a weirdness and more of a strategic concern, it soon becomes second nature.

Photosynthesis’ turns themselves are quick and easily resolved. At the beginning of each round of turns, the players increase their light level based on how many (and what size) trees they have, assuming that they are in direct sunlight. Then, players take turns to spend that light on adding seeds and trees to their available supply, or to plant seeds or upgrade trees. If a tree has reached the third upgrade (large) then four light can be paid to harvest it and take a victory point token that represents the space where that tree was planted. Clearly, that space will then be unoccupied, which makes it fair game for another tree.

There are some interesting rules to consider when it comes to light generation and how far seeds can be cast. This is all mathematically simple — small trees collect one light, cast one space worth of shadow and can only put seeds out into the adjacent space. Large trees cast a shadow up to three spaces away and can send seeds out just as far. Players can take more than one action on their turn, but only one action can be used per space — so you can’t plant a seed and then convert it to a small tree on the same turn, for example.

Once each player has taken a turn, the next round begins and the sun moves one sixth around the board. Light is then gathered again, but of course the angle of the sun could now mean that some trees receive light, whilst others do not. After six movements, a symbol on the board indicates that the players should remove one of the round tracking tokens and move to the next rotation. As I mentioned earlier, at the end of three (or four) rotations, the game ends and the player who has the most points wins. 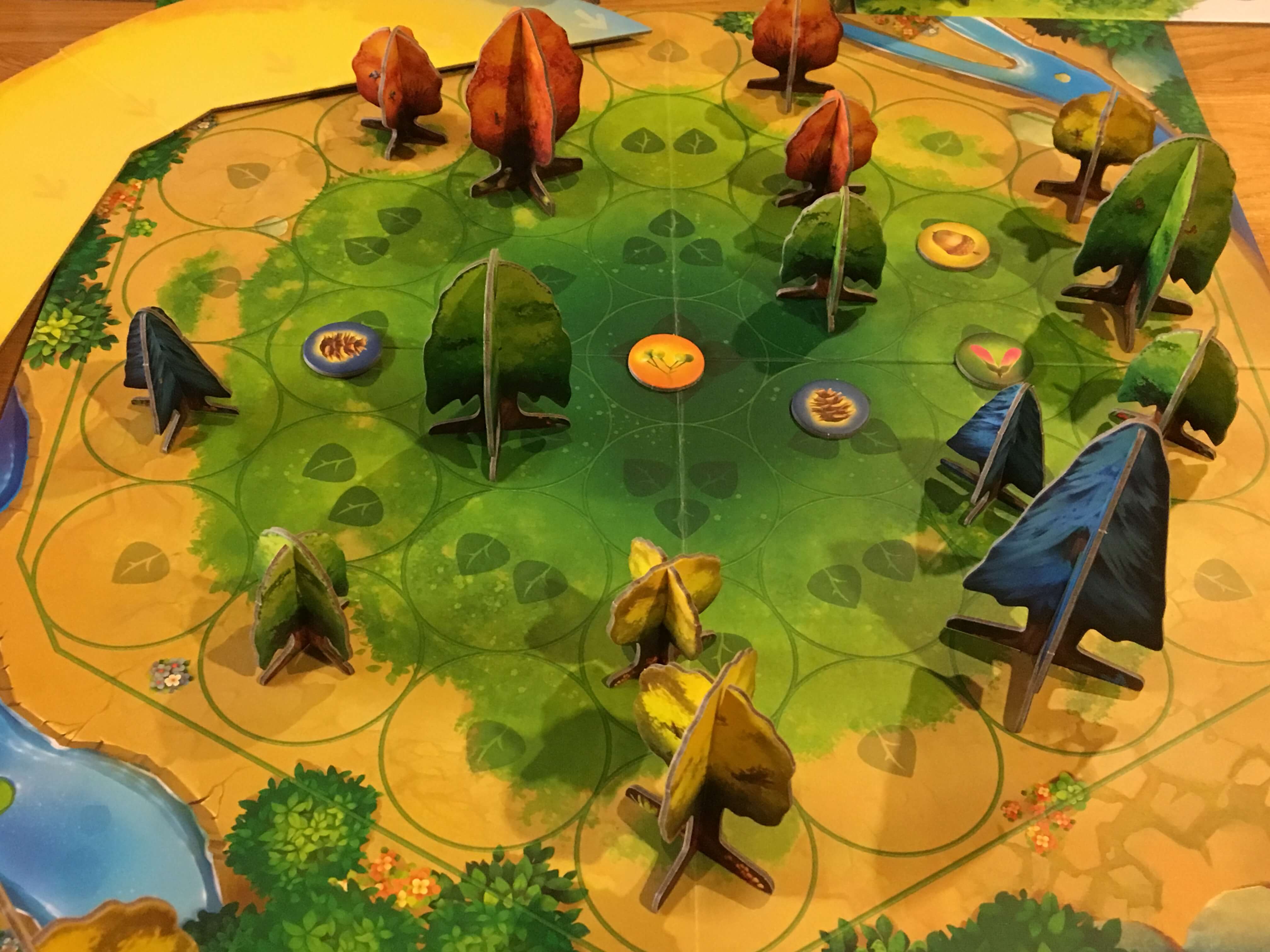 Putting aside the fact that I did have a challenging time getting my head around the way that some of Photosynthesis’ mechanics work, I think it’s an amazing game. One of the reasons for that is actually because it is so different to other games — mechanically, visually and thematically. Photosynthesis is a game that can be understood relatively quickly by almost anyone, but which can then be enjoyed by gamers of all skill levels — including those who prefer mid or heavy weight experiences.

Photosynthesis is a game that looks very, very simple, but which is filled with challenging and important decisions. Spending light on upgrading trees is the least of your worries, although there’s a time and a place for everything. The real challenge comes from when you do something and where you do it — both of which are decisions that can affect other players and in turn, might make them want to affect you. Growing a tree can block the income of another player for several turns, but choosing to harvest a tree can open up a critical space in a valuable location.

It’s rare for a game to force players to consider the input cost of a decisions as well as the ongoing cost (in light generation, shadow casting and so on) of a decision in the same way as Photosynthesis does. It’s even more rare for a game to capture that in a way that is as logical and thematic as it is here. There is a legitimate desire — a need — to harvest, but when to do it is a massive decision, just as when to plant is, especially when playing with the advanced rules that prevent trees from being upgraded whilst under shade. 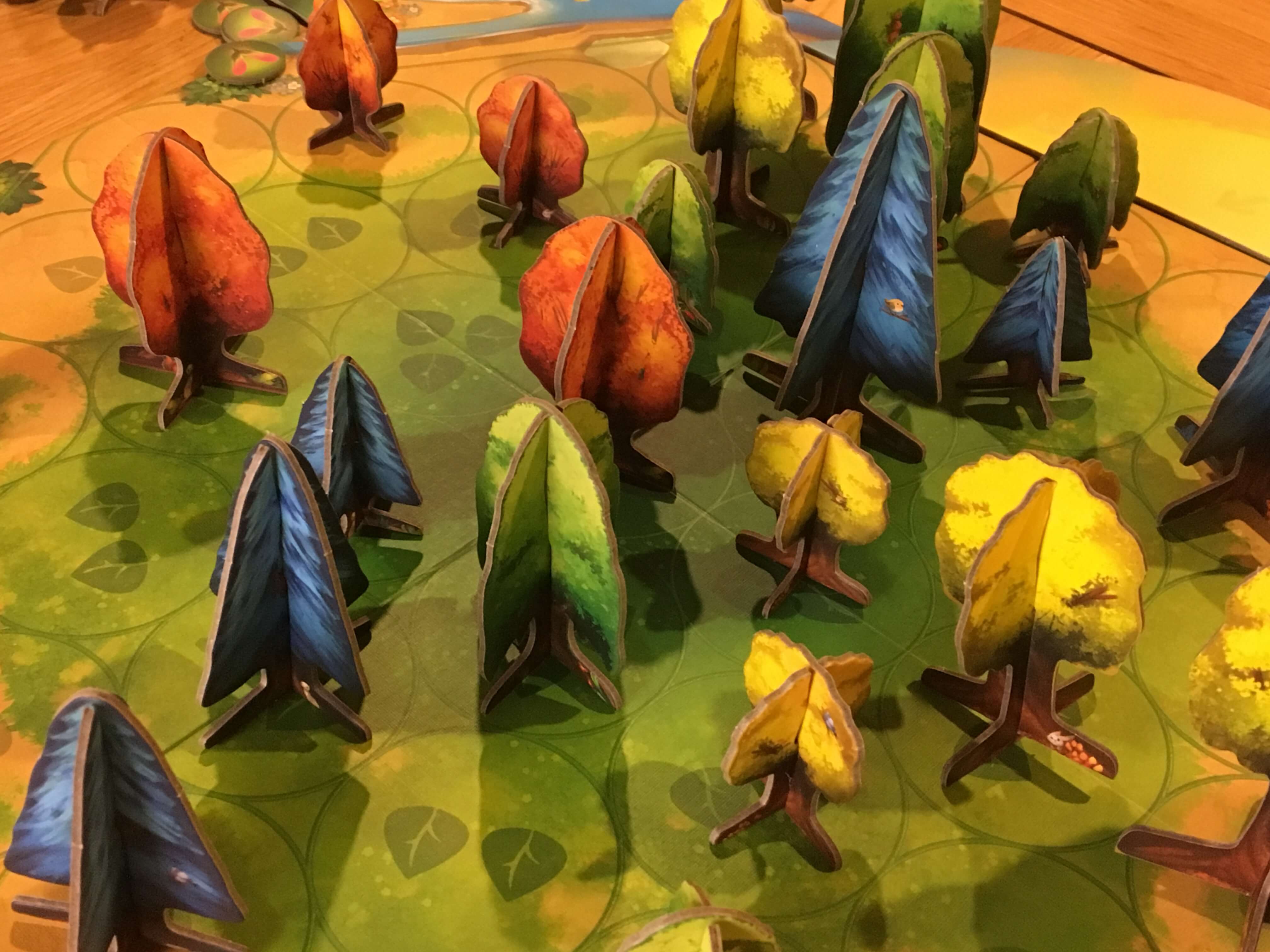 I can normally suggest two, three or even more games that are similar to a game that I might currently be reviewing. For example, there are hundreds of worker placement, miniatures, war or card games out there. I’m not sure that I can name another game that is quite like Photosynthesis, however, in either form or function. I’m not recommending simply because it’s unique however — I’m recommending it because it’s unique and very, very good.

I suppose the question really is, what are you looking for in a game? If the answer to that question is; a hugely attractive, simple to pick up but reasonably deep game that is filled with decisions, then you’ve found it. I’d love to tell you that placing trees in your arboretum was a relaxing experience that lead to soft, gentle gameplay, but it’s not — it’s bloody taxing and it’s also surprisingly cutthroat. There’s an organic realism to Photosynthesis that feels incredibly natural — it’s a literal game of survival of the fittest and I can’t help but love it.

A copy of Photosynthesis was provided for review purposes. You can find out more about it on the website of publisher Blue Orange Publishing.