The studio, co-founded by Jullian Gollop ahead of their 2014 Kickstarter for Chaos Reborn, is seeking to raise $500’000 over on FIG for their science-fiction, strategy game and has already -at point of writing- raised a little over 460k of that goal since it launched on the 25th of April. The campaign itself runs until June the 8th.

The game takes a lot of the classic (and modern) XCOM features and builds on them with enemies that evolve defences to counter your tactics; other, possibly friendly, human factions; massively unseen levels of destructibility, and a movement system that promotes pushing forward through the levels. There’s also the chance to take in squads of up to 15 fighters, if you’ve the technology, as well as gain backup in fights based on the movement of allies in the game’s geoscape. 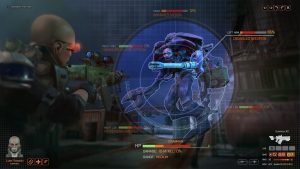 The story denotes that Earth’s permafrost defrosts in the early 21st century, revealing a virus -the Pandora virus- to the world. Within a generation it, and the mist it has created, has laid waste to humanity leaving only small pockets of survivors. Apparently players will head up a cell of a faction originally intended to save humanity from crises like this – although you do have to question the effectiveness of the organisation prior to the game start, as it appears they’ve largely failed and you’re possibly the last group of the faction.

Of course, it wasn’t just the mist that killed everyone off, horrible aquatic-ish creatures rose up and consumed the people on the land; adding the human genome to their DNA mix, and absorbing technology and matter like the Starkiller of The Thing. As a matter of fact, one of the models over on the FIG page is clearly a humanoid who has been mutated; left obvious by the fact they are still wearing rags of clothes.

As such the game looks to make you the very best of the best, against an adaptive force of the worst of the worst, and in a sci-fi horror setting. It’s certainly not been trodden before.

Throughout the campaign (and just before it started) the developers put their recently hired scribe, Jonas Kyratzes, to work on background for the game’s world. With a recent update there’s now six major dossiers on their website, with more to follow.

You can find out more about the game, and back it, over on its FIG page.. Current pledges include the change to get your name in the credits, early access (Q1 18) to development builds, as well as a whole lot more.