Order of Battle: Sandstorm follows the exploits of Rommel in his attempts to secure North Africa against the Allies. In addition to an extensive, varied campaign, it challenges players to both alter a few habits and familiarise themselves with a new selection of Italian troops.

It’s been a while since we’ve talked about Order of Battle here at B3 in fact, our last discussion on The Artistocrats’ stunning wargaming series was back at the end of 2016 with the Blitzkreig expansion. There have been three expansions in that time: Kriegsmarine, Burma Road and Panzerkrieg. However today, we’re here to talk about the latest: Sandstorm.

Order of Battle: Sandstorm is a further chalk mark for The Artistocrats in their mission to continue representing rarely covered combinations of theatres and combatants. Of the game’s ten expansions, most have unabashedly followed the exploit of the German forces, but this is to be expected for a game which — prior to its free-to-play core — launched with a major focus on the Pacific theatre. Sandstorm is another German-centric campaign, albeit with the Italians in tow — and one that focuses on Rommel’s North African campaign from 1941 to 1943. 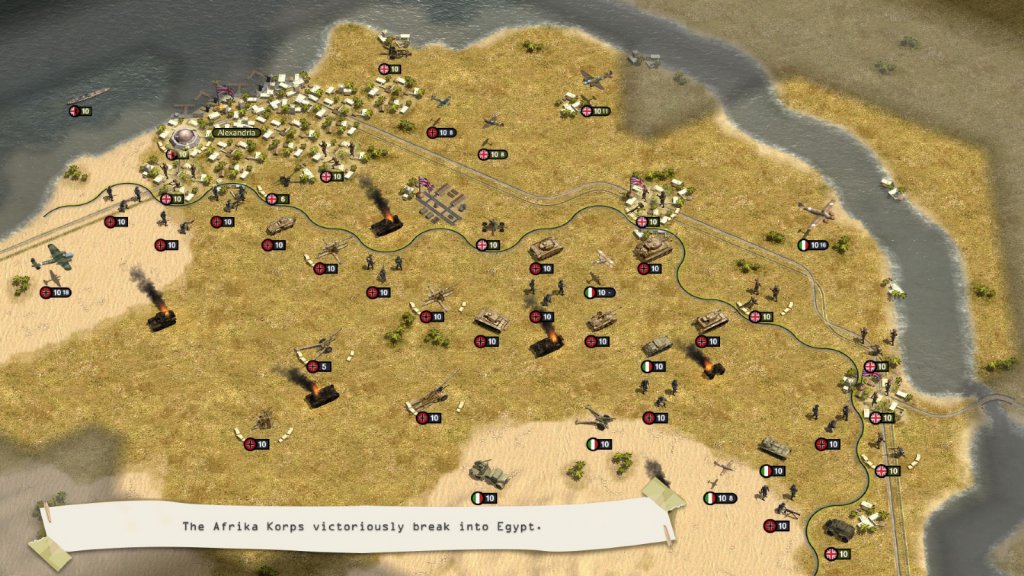 While the Italian forces certainly don’t start out as a force to contend with, they have their own command points. This means the expansion is best played with you specialising across both of the forces; maybe your core vehicular forces will remain German, while you use Italy’s command pool to maintain a mass of infantry and light aircraft. There are definitely a lot of options due to the almost doubled troop selection.

It’s not just which troops you use that needs to be considered. While there are some naval battles in Sandstorm, a lot of the combat takes place on flat desert land. This change in setting requires a change in tactic, especially as many of the maps are large, with few turns.

The first mission, a rush to reclaim land recently lost by the Italians, sees you given a choice of surging across rough, desert land or taking triple that time by following the coastline. Splitting forces is definitely a viable (if not recommended) option, with experienced players likely able to reconnect their two pincers in an assault on the — historically uncaptured — optional objective of Tobruk. 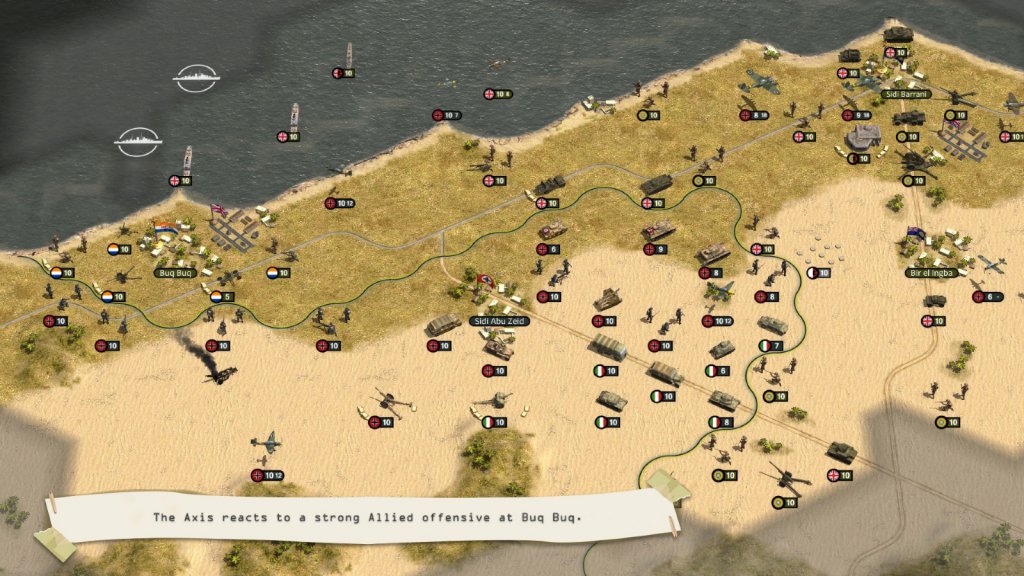 This change in pace, wrought through map changes, means that you’ll need to make better use of both scouts and the skies. While Sandstorm’s AI still can’t quite decide how to prioritise objectives, weak units and retreat, it can still lurk slightly out of sight and land a few wallops on troops that rush blindly forward. This is definitely a threat in the wider, land-combat levels, as you’ll need to mechanise your infantry if they’re going anywhere near the desert.

That said, not every mission takes place across a wider map. The missions Run for Tunis and Cairo are mid-points in the campaign and couldn’t be more different. Tunis felt like a crude and explosive sprint for the finish line — a situation that demands you apply a constant level of high pressure to ensure that the shells and bodies behind you aren’t friendly. Cairo is a knotty mess of chokepoints and rough terrain: the most memorable instance of it in the entire campaign.

If the first mission (Tobruk) was a lesson in relearning offense, the second and third (Halfaya Pass and Crusader) are masterclasses in running reinforcements in desert conditions and multi-front defensive combat respectively. 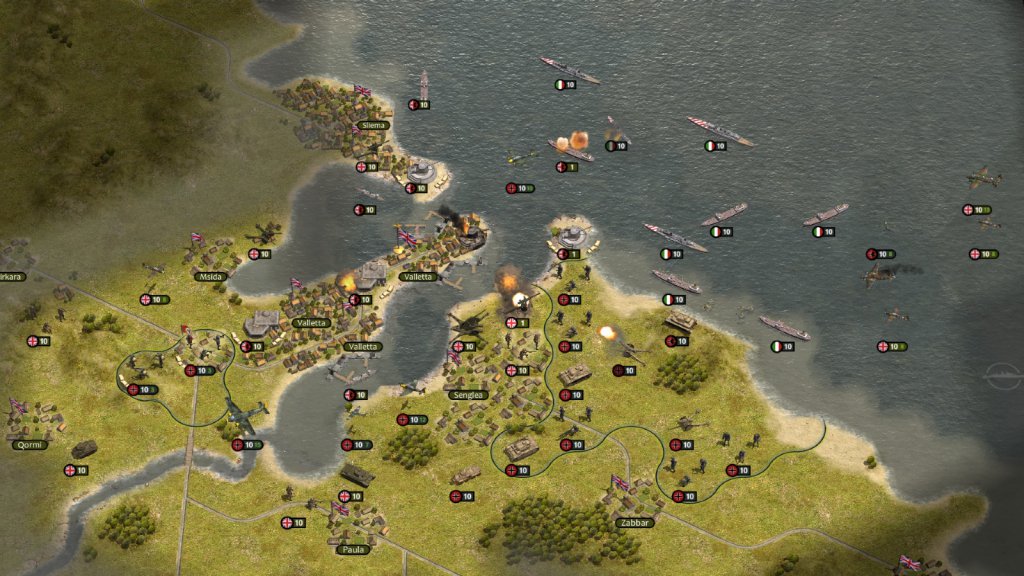 Halfaya Pass is easily one of my favourite missions from the my time with the entire Order of Battle library. You deploy reinforcements in the North — in my case a split of Italian L6/40s and transport-ready troops alongside some Stugs and Panzers — and race them to the defence of your held land as British forces start moving in from three directions. It’s a perfect proving ground for your theories about rapid deployment and adept supply-line severance.

Crusader’s multi-front defence starts you on the backfoot, which, considering the expansion follows Rommel, should really be expected of Sandstorm’s campaign. You can alleviate the situation depending on your performance in the first mission; if you succeed where the Axis forces historically failed and manage to capture Tobruk, you don’t have to maintain the siege on the city. Crusader, much like the also optional Buq Buq scenario, is a perfect chance to familiarise yourself with new units. I found both more efficiently completed by deploying fresh troops rather than the core from missions previous.

The Artistocrats have achieved a lot in the Sandstorm campaign. Its branched campaign is smart; the split of command points and the variety of scenarios show that the developer has become increasingly confident in their game— and for the better. 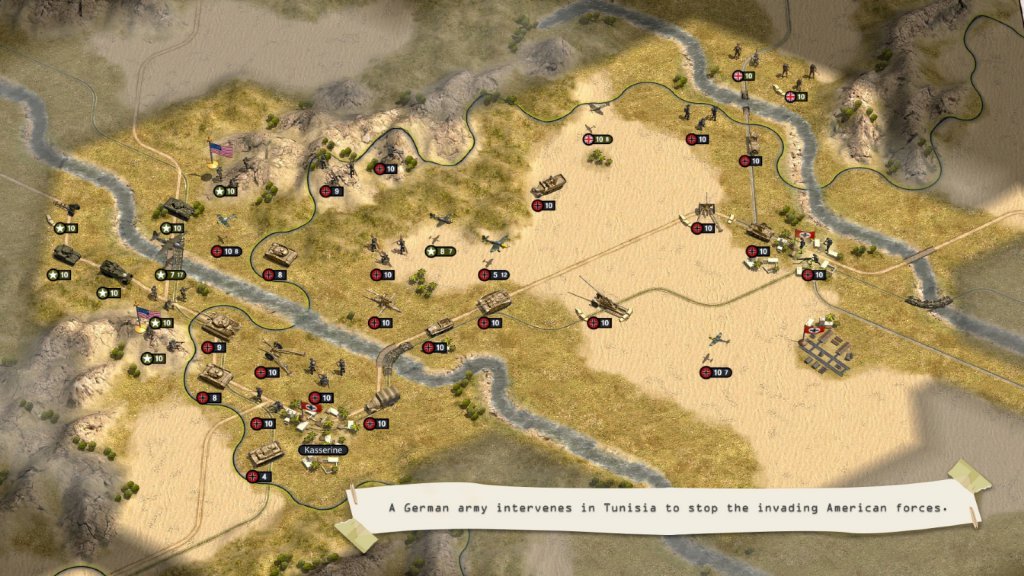 I’ve always had little time for convoy-style missions in wargames and that’s not set to change anytime soon, but aside from the land and sea convoy missions in Sandstorm — and the ‘ridge’ terrain in the first mission not being clear — I have zero complaints about it. Sandstorm is easily the most realised campaign in The Artistocrats’ fantastic wargame. They’ve become masters of their tools.

All images supplied by publisher Slitherine.