This is merely an observation of something I have recently been through regarding wargames — specifically, Matrix World in Flames. In case you are unfamiliar with it, do not feel alone. This is a very niche game with an extremely specific audience.

I will start with the fact that although Matrix World in Flames is a very good, turn-based, WWII wargame, it plays very different to any other wargame ever built. There is always a massive number of strategic, operational, and tactical-level decisions to be made — probably more so than any other game built (including Gary Grigsby’s series of wargames). This not a traditional review, nor an AAR¹.

Recently, I once again found myself in an online wargame discussion. But in this instance, it was not in a regular wargame forum. This time it was in response to questions from a guy wanting to get into the genre. Since that was not the norm in this particular forum, there was limited feedback for the poor soul, looking as he was to find his way into a (quite often niche) genre. Basically, it was me and two or three other guys giving our opinions, while a few other people occasionally gave their two cents’ worth as well. He seemed genuinely appreciative of all of the input. 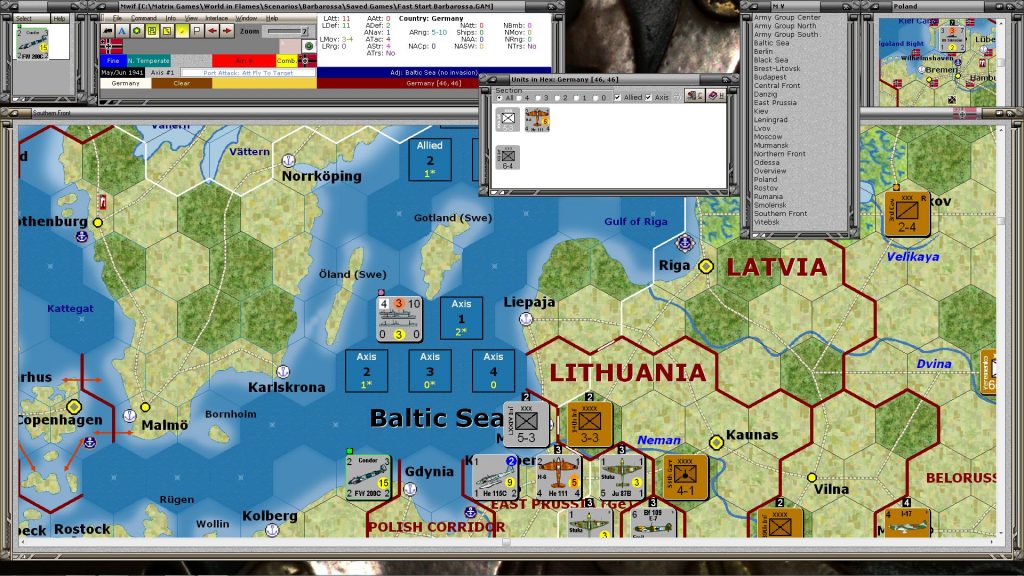 We were not talking about Call of Duty here. The individual was asking about which game to use as a launching point to lead him, eventually, into the hardcore, grognard level of wargames. It wasn’t until a couple of days later when the discussion had all but died down, that he made a decision on Advanced Tactics: Gold (an excellent choice, by the way!).

While dissecting everyone’s input, including my own, Matrix World in Flames (hereafter just World in Flames or MWiF). was never mentioned. Why might such a good wargame neither be brought up to a beginning player nor even mentioned in the little segments of talks about more advanced wargames? 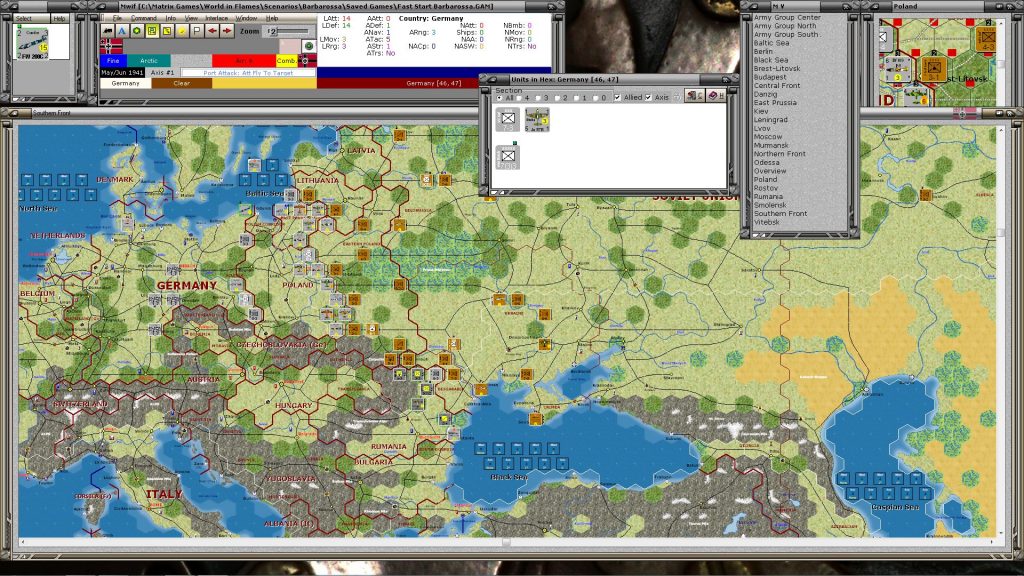 Let me preface all of the rest of this opinion piece with the fact that, to my knowledge, there is only one guy (Steve) working on this game. That’s impressive since World in Flames is one of the most complex games ever; the last I saw, there are over half a million lines of code with almost five hundred modules. Steve’s cups (and hands, ladles, spoons, etc.) overflow-eth.

First of all, there is no AI (yet, anyway!) in World in Flames. You either play both sides, hot seat, or (try to) play over the net. Netplay and bugfixes have been prioritized over AI development for quite a long time now — the entire time, as far as I can tell. Four years since release, the nightmare that will be an effective AI is still not the main concern. A lot of people that pay high-dollar for a game would like for there to be an AI opponent, even if it beats them to death, to learn from those experiences. Regardless, one of the benefits of choosing to play both sides is the fact that you could learn the mechanics twice as fast. It is possible. For the foreseeable future, though, you will not be able to learn from an AI trouncing.

The almost vertical learning curve leans even more towards ninety degrees if you don’t have familiarity with the boardgame. Although I am experienced with wargames, I have never played the board version of World in Flames before. A lot of the mechanics (even the basic turn structures/segments) were brand new to me. Most of my past encounters have been basically IGOUGO² or WEGO³. Having each turn broken up into so many parts was a little shocking. Being somewhat used to the depth and amount of detail and minutia helped, while the turn organization I was not familiar with at all.

Along those same lines, and once again, World in Flames just does not ‘feel’ like any other game. Once someone has learned how to play games like Advanced Tactics Gold, there is almost a natural progression into harder and more complex wargames. Although more difficult, the Decisive Campaigns series is built upon the same engine as ATG. Once you are more attuned  to how hex-based wargames work (whether through Slitherine’s catalog or not), there is still an evolution needed to take the next few steps to get at least close to Gary Grigsby’s War in the _____ worlds (which are widely regarded as top of the line, grognard-level wargames). However, with everything I have played, I never felt like there were any ‘stepping-stones’ from beginner to MWiF.

So we come to the elephant in the room: World in Flames is an elephant of a game. It is a monster of complexity. It is not a pick-up-and-go foray into wargaming. It is not a beer-and-pretzels endeavor. It is Brutally Difficult. As an older wargamer who got used to reading printed manuals back in the day, when I opened the 720-page PDF manual, I will admit that I peed a little bit.

However, coming from that background (of reading a manual once, highlighting parts as I went, then reading back through it again with strips of hand-torn and labeled Post-It notes, systematically placed [so they wouldn’t overlap much] every X number of pages for easier access) it was not quite as daunting for me as it would be for someone who has never been through at least an intermediate-level wargame. Do not be mistaken, there are a lot of rules. There is a ton going on. Here’s just one tiny piece of the manual and game turn sequences:

“There are 60+ phases to the MWiF sequence of play and 6 of those (e.g., the combat phases) have subphases, which add another 80+ subphases. 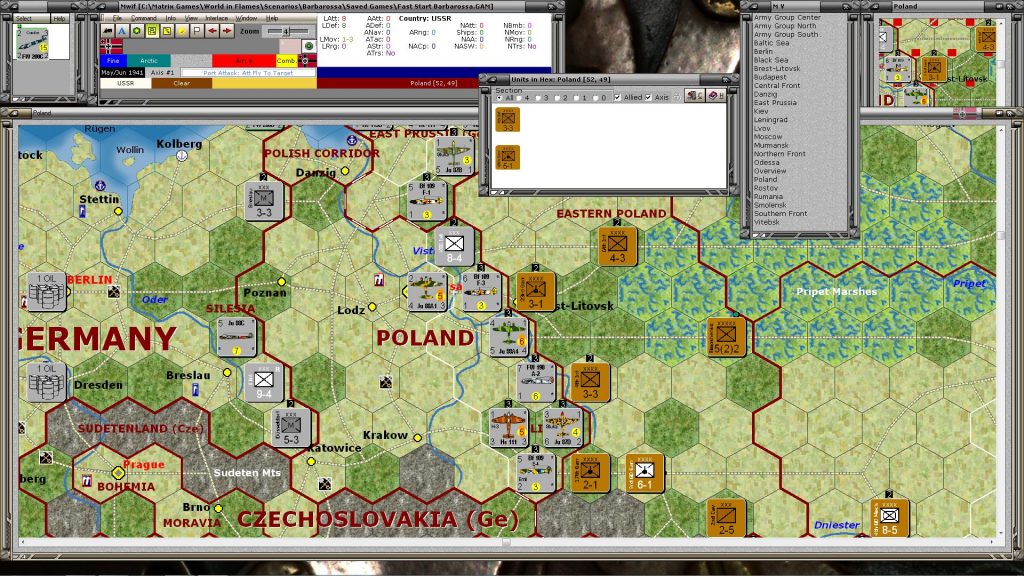 There are also 7 digressions from the main sequence of play that occur for such things as forced rebasing of overrun air and naval units, declaring Vichy France, and correcting over-stacking.”

For someone who is more used to, in short — check supply lines and ammo → figure out aircraft and artillery targeting → opportunity or initial firing → plan and/or move the rest of the units → hit end turn — having all of those segments and sub-phases was quite mind-blowing at first. Even while playing both sides, it definitely takes some time to get used to! Luckily, there are also interactive tutorials within the game itself to help introduce you to some of the minefield of multitudinous facets requiring your attention. 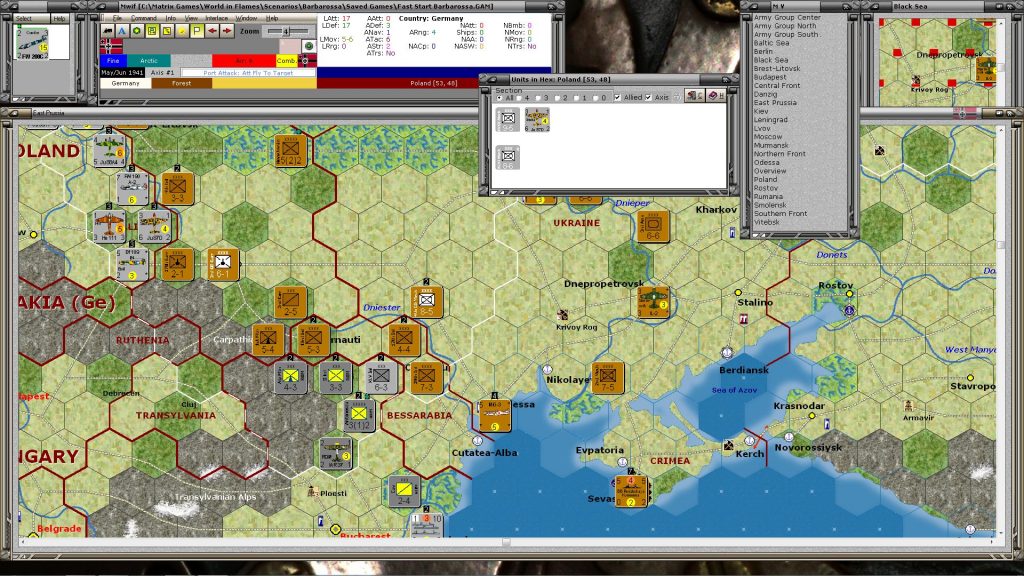 My advice is to read the manual, top to bottom. In this day and age of shortcuts and ease-of-use, you just have to know what is going on, period. Stick to your guns and your monitor (unless you ‘accidentally’ take it to work and print it all out) and read it. Then read it through again. At least now it is easier to highlight and make notes and comments.

Finally, with only a sole developer, World in Flames still has quite a lot of bugs. However, since he is still working on it, there is also a stream of hot patches. (My last one is Version 02.05.07.04). There is still hope and don’t give up the ship, because Steve has not.

So, if you find yourself in a discussion about top-notch, hard-core, grog-level, WWII games, at least you have now heard of World in Flames. Expect many hours of learning and reading to get even somewhat of a grasp on it. If you do have the time and patience necessary to learn it, you will definitely be well-rewarded.

[2] Turn-based gameplay where one side does all of their turn possibilities/functions, then the other side does theirs.

[3] Turn-based gameplay where both sides give orders, then they are simultaneously executed.