Not getting Left 4 Dead in Earthfall

Bearing more than a passing resemblance to the two Left 4 Dead of games made by Valve, I present you, dear readers, to Earthfall which has been recently released on the 26th of April 2017 as an Early Access title, and is available from Steam.

If you’ve had any playtime on either of the Left 4 Dead games, then you’re going to know exactly what to expect from this science-fiction extravaganza. Yes, just like L4D you can choose from 4 different characters and play with your online buddies or random players. If you jump onto a server with friends or strangers and every slot isn’t filled, then AI bots will take over whatever slots are left. You can also play solo, with the other 3 characters being controlled by AI, and to tell you the truth, they don’t work that bad; even this early in the games life. Sure, they run in front of you and get hit by your bullets (friendly fire is on in this) but they do help you up if you run out of health, they shoot at the alien horde rather than ignore it, but one thing I’ve noticed is that I’ve never been healed by one yet, and they always seem to pick up the health kits dotted around the levels. 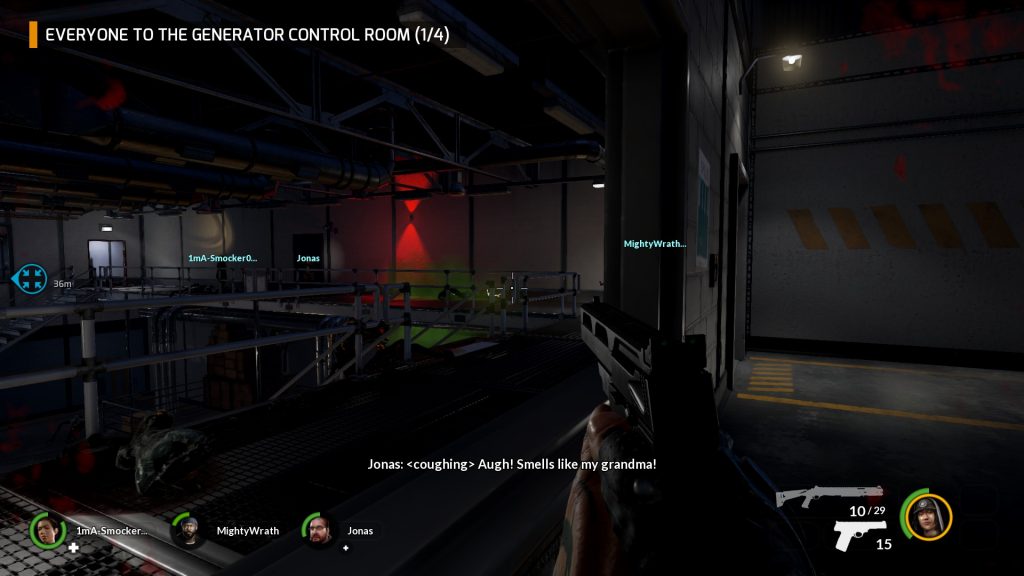 To anyone that has never played L4D, it was all about surviving the undead as players trawled through a linear map in a first person perspective whilst getting through a level with obstacles in the way, and the only way to get past these was usually to operate machinery, which of course made the undead aware of your location due to the noise. Surrounding you were hordes of the little blighters that came running at you in a hungry-for-flesh frenzy, it was like they were wanting to be shot at by weapons that were handily laid about in the levels. There were events that took place where there are literally hundreds to shoot at, and then came the special undead which of course where the undead creatures that held special abilities, the “Hunter” for example, which pounced on you, the “Smoker” which grabbed the survivors with its tongue, and several more. The Hunter and Smoker would grasp players and this would force the rest of the team to attempt to save them. 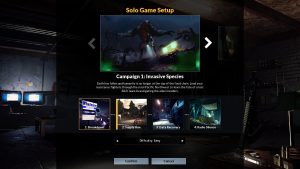 L4D came out a few years ago in 2008, so maybe there are some gamers partial to a FPS title that haven’t played it yet, but really, the similarities between L4D and Earthfall are strong, apart from Earthfall hosting aliens rather than the Undead. Earthfall does have its own idea’s thrown into the mix, with sentry turrets the players can deploy and barricades to erect coming in handy, but these can be knocked down or disabled if it gets hit too many times. There’s also the 3D printer, but to power that up it attracts the alien horde, but once it’s fully powered up you can get a weapon of your choosing as there are no materials that you need or in-game currency.

At the time of writing, the game only has 1 campaign which is made up of 4 levels, these can take roughly 30 minutes each to beat on easy mode, or longer with the other difficulties, and with each one corresponds to how difficult the enemies are and what damage you take from friendly fire and the Alien’s attacks, which are mainly melee. Basically, players can expect a good hour or so on the hardest difficulty on each level, which is the “Overwhelming difficulty”.

The game came out with 72 Steam Achievements and Steam trading cards as standard, this bolsters up the replayability a bit more to say 10 hours – 15 hours, with you trying to gain 100% the achievements. Some of the achievement see you trying to kill enemies with “X” weapon, or complete “Y” level on hardest difficulty.

Earthfall is very fun, especially with friends or random strangers alike. I didn’t experience any lag or stutter on the “medium” graphical setting with my 3GB Nvidia GPU, although I began to get a tiny bit of stutter on “max” settings when the going got hectic, and to be fair there’s little difference between medium and maxed out graphical settings. 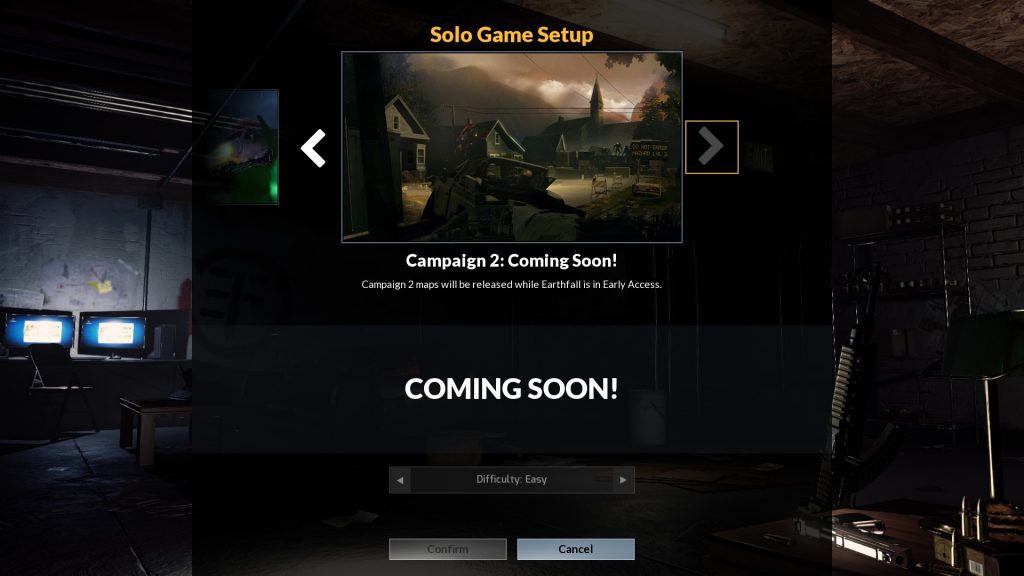 The story gets played out during the campaign with little bits been told to the player through random chatter, or with missions that need to be completed within a level. There are no cut scenes telling us how the aliens got to Earth, why they want to destroy us, and why didn’t they just leave us alone and let us Humans kill ourselves off, then come to Earth? Heck that’d save their species a lot of death and trouble, and claim a planet without much fuss…oops sorry for daydreaming there. 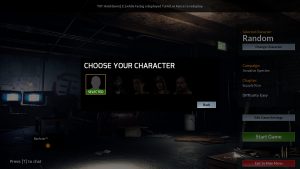 Controls are as much as you would expect in an FPS, or if wanna be different and change your keybindings then it’s all there for you to tweak. Feel free to crank up the mouse sensitivity if that’s your thing, C for crouch, or CTRL,etc. The only thing I’ve noticed missing is turning off the subtitles and the FOV visual slider, but being this early into Early Access it’ll probably turn up sooner rather then later as will a lot more that I’m hoping for.

Weapons include melee weapons such as axes, firearms like the pistol (which has unlimited ammo, but still needs to reload) and other firearms which have a longer range, and limited max ammo, but can be restored with ammo boxes that are placed in the level. Don’t bother shooting the nasties if they’re not moving though, because even if you kill ’em they don’t get treated as being killed in your stats and achievements. Sometimes they don’t even flinch whilst you shoot them so yeah, there are bugs in the game, and not just alien type bugs but gameplay ones too.

My personal message to you really is grabbing this as soon as you can, as to me, this is the unofficial Left 4 Dead 3 (I think we all know Valve can’t count past 2), but some suggestions to the Dev’s (Holospark) is that it would be nice to be gaining experience points to get skill points to use on a skill tree, allowing you to become stronger in using different firearms or melee weapons (like say 20 – 30% better accuracy with your selected firearm, 20 – 30% more damage with melee weapons) Obviously not making them too powerful or you’ll be throwing more into the mix of the L4D route it’s currently taking, and you still need to work as a team. Maybe add more replayability to the title by adding challenges to unlock vanity items such as skins when you pick up a certain weapon, or even changing your clothing so we all don’t look the same. 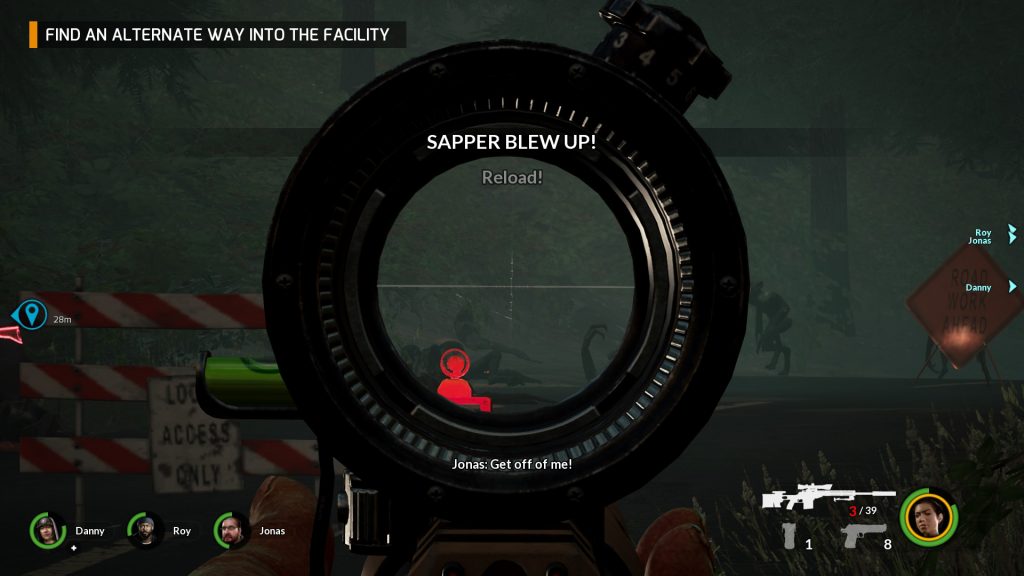 Just a few possibilities that could be added here, but certainly a great start to a game nonetheless. Nice ‘n fast, action packed just how I like ’em.

A quick note that I feel I need to add is that the game first came out at over £20, then on the 28th of April came a shock move that stunned me, which was Holospark slashing the games price off by 50% permanently, so it now only costs £10.99 which is a lot better, and they’re willing to refund the game on Steam for the gamers that purchased before the price change, so the players could, if they wanted to, buy 2 copies of the game, one for themselves and another for a friend. For a new development team, that speaks volumes in my eyes…good job Holospark.