Cults, curses and a couple of campaigns, Mörk Borg Cult: Heretic is a supplemental zine that brings together some community-created content to deepen Mörk Borg including some useful tables and ready-to-play scenarios.

Mörk Borg had a big theme of hopelessness running through it, and it subsequently turned a lot of classic fantasy-setting RPG tropes on their head; The gods aren’t around and occasionally benevolent, they’re obsessed with death and going to eat the world; Its world wasn’t a functional society, pushing back against beastly creatures, nope, the world is corrupt and broken, and there are no bastions of help, only hubs of destitution; Society doesn’t persist and recover from poisonous governance, it withers and writhes in its final death throes. Mörk Borg Cult: Heretic isn’t a case of the creators doubling down, or kicking the world while it’s down, it adds a lot of depth and options, and gives a few really cool ideas on how you can continue to exist, or perish, within Mörk Borg‘s brutal setting.

I don’t think anybody plays through Mörk Borg expecting to defeat a god and save the world, or topple the withered, corrupted remains of the world’s rulers and replace them. It’s pretty clear from the outset that nobody gets to do that unless they’re replacing the dead with an equally sinister, selfish or broken individual. Mörk Borg requires that you acknowledge that you probably won’t make it out of the session whole, especially not if you push your luck. As such, you’ll be wading knee-deep through waste, rot and desperation, but if you can successfully do that then there’s a lot of raw, dangerous power to be found.

Mörk Borg Cult: Heretic adds in a whole bunch more content to underline that, things like ‘Seeds of a Cvlt’ which gives you a series of quick, easy to use tables, perfect for building up a new religious collective on the fly. There’s also a table regarding curses and their cures, an immortal merchant of strange artifacts, and a few new (unheroic) feats for your characters if you decide to build them from scratch, without classes. If you’re not a fan of classless, freeform play then there’re two new classes, each perfectly fitting the Heretic title. The Shedding Vicar who peels back their own skin to gain powerful, dangerous abilities, and the Sacrilegious Songbird — a bard equivalent — who can deafen, starve or heal enemies as well as annoy them to no end. 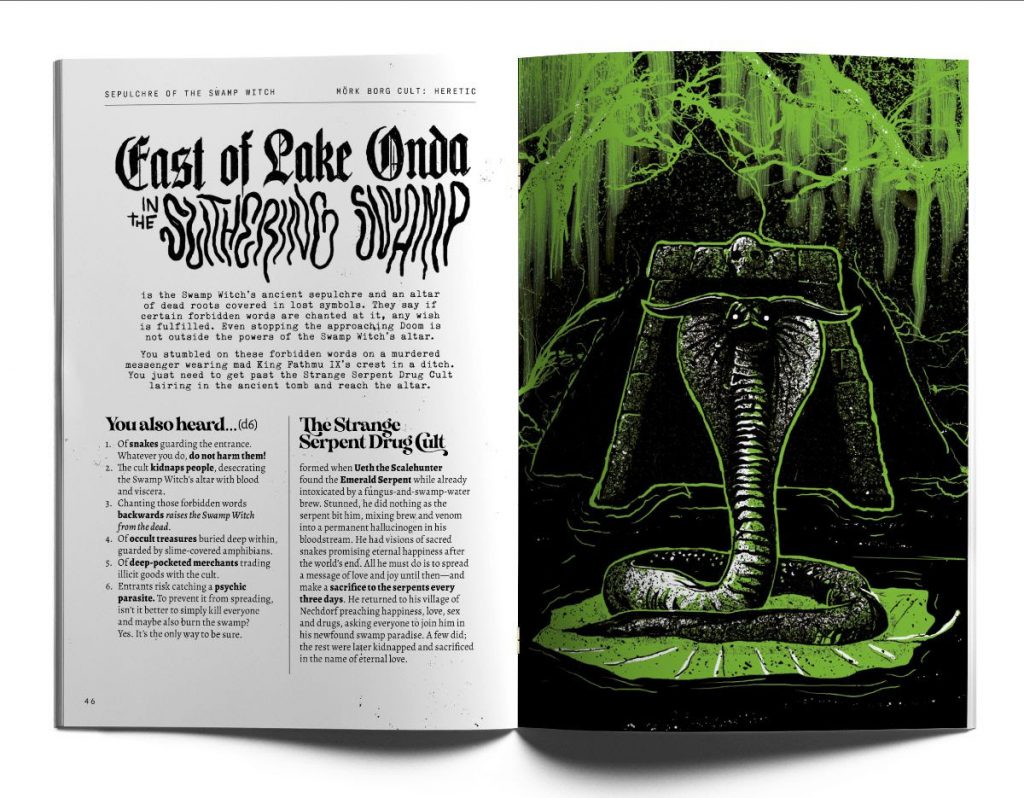 The feat and curse lists are fantastic, with some really classy ones in there like a feat where you are sealed into your armour, one where you are haunted by ghosts, and another where you are… likeable. A favourite curse of mine reads, “3: You now trust everyone you meet. They instinctively know this.” However, other curses like all glass near you shattering, an inability to lie, or all tools breaking the moment you use them also stick out.

The thing is, Mörk Borg Cult: Heretic‘s included scenarios are designed in a way where they can be easily ported over into a wide selection of other systems. In fact, the whole Mörk family of games (Cy_Börg included) seem to be designed with that in mind. They’re a great mix of scenarios too. Graves Left Wanting has your group exploring a shifting graveyard, meeting a few other adventurers and fighting an unexpected foe; it’s also perfect if you’ve just TPK’d a bit early, or if you want to start off a new group of characters without fully developing character backgrounds. Sepulchre of the Swamp Witch is a dungeon-delver with a twist, and Bloat is a great introductory scenario that has lots of room for creative solutions. Finally, Nurse The Rot is a perfect introduction to the ominous, malignant Rotting Nurses, a group of immortal, haunting ghosts who can easily be used to shape, define, or direct a campaign. 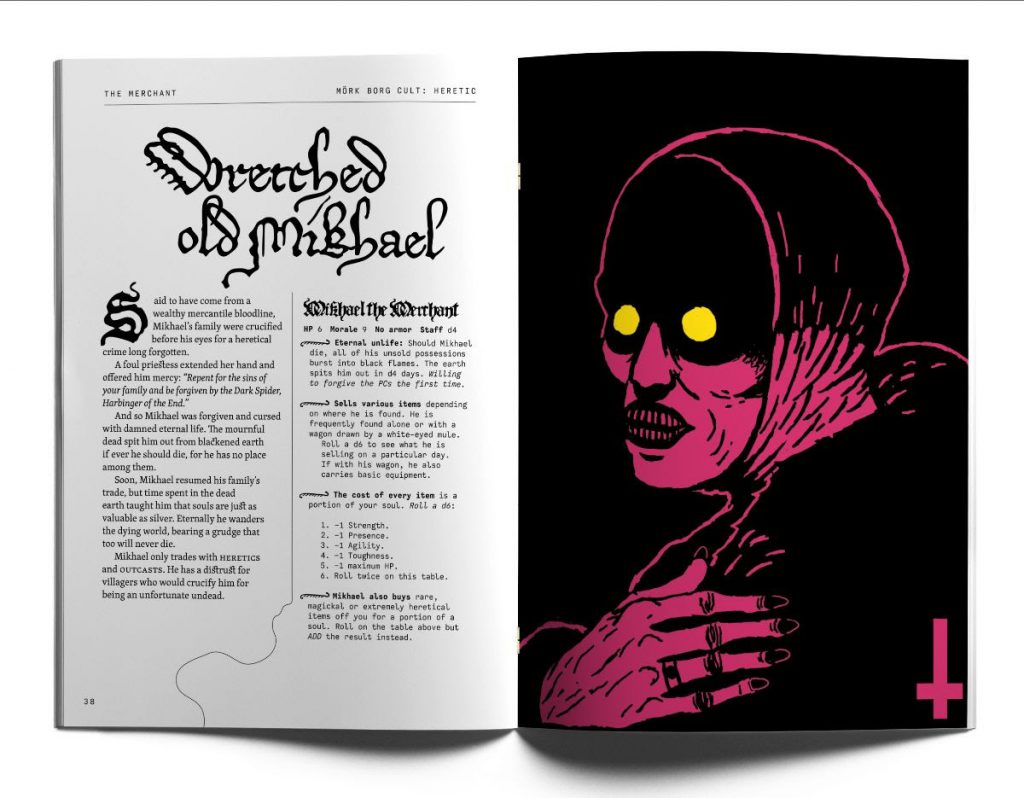 There’s a lot of good stuff here, but, as with Mörk Borg, it’s not one for the squeamish. Enemies like the Bone Bowyer, and a weird armoured insect which snatches away children, are included, and that just might not be something you can stomach — although the screaming, noosed, horned skeletal chap on the front cover probably serves as warning enough. If you’re looking to add a little doom and gloom, or plain haunting horror, to your campaign, or deepen your Mörk Borg run, then dive right in.

Mörk Borg Cult: Heretic is a great collection of fan-made content, curated by the original team and submitted via their Cult program. Find out more on the official site.

Close encounters with death in the Forbidden Lands