Full disclosure, I have always been a traditionalist when it comes to fighting games — my talent ran out somewhere around the time Tekken 3 was released, and I definitely have more of an affinity with slower, more traditional fighting games like the Tekken or Street Fighter games. That said, I was enthusiastic to try Melty Blood Type Lumina thanks to a range of mechanics that it uses to simplify the experience for luddites like me.

Melty Blood Type Lumina is the iteration of an existing fighter known simply as Melty Blood that has just been released on Xbox One, PlayStation 4 and 5, and the Nintendo Switch (as well as the existing release on PC). The game is known for its understated art style, its intricate combat and even for having a half-decent story. The first and second of these features allegedly made the original release of Melty Blood quite a popular side attraction at fighting game tournaments pre-Covid. 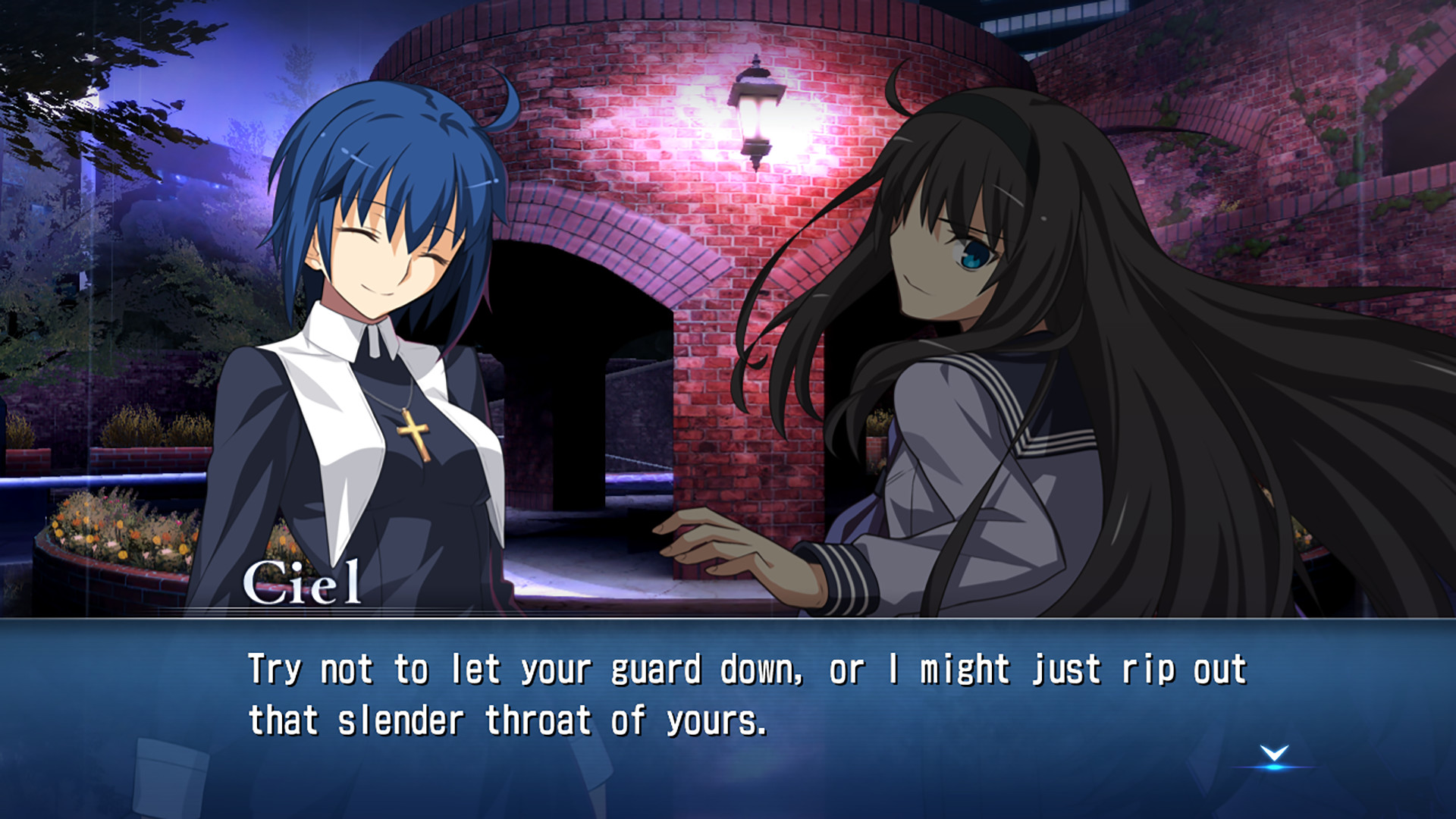 In its current release, Melty Blood Type Lumina is an extremely feature rich package that — to my novice eye — caters extremely well for players of all skill levels, with or without an intent to learn. In terms of modes, my view is supported by an excellent Tutorial that introduces all of the mechanics — of which there are many — whilst a free training mode allows players to practice to their heart’s content.

Story and Arcade modes allow the player to explore the world of Melty Blood — a place populated by vampires and other lesser demons from the perspective of each character. My personal take on this was that the story was a cool inclusion, but there’s little here besides text in between battles, and with no particular affinity for the characters or universe, I found myself skipping a lot. 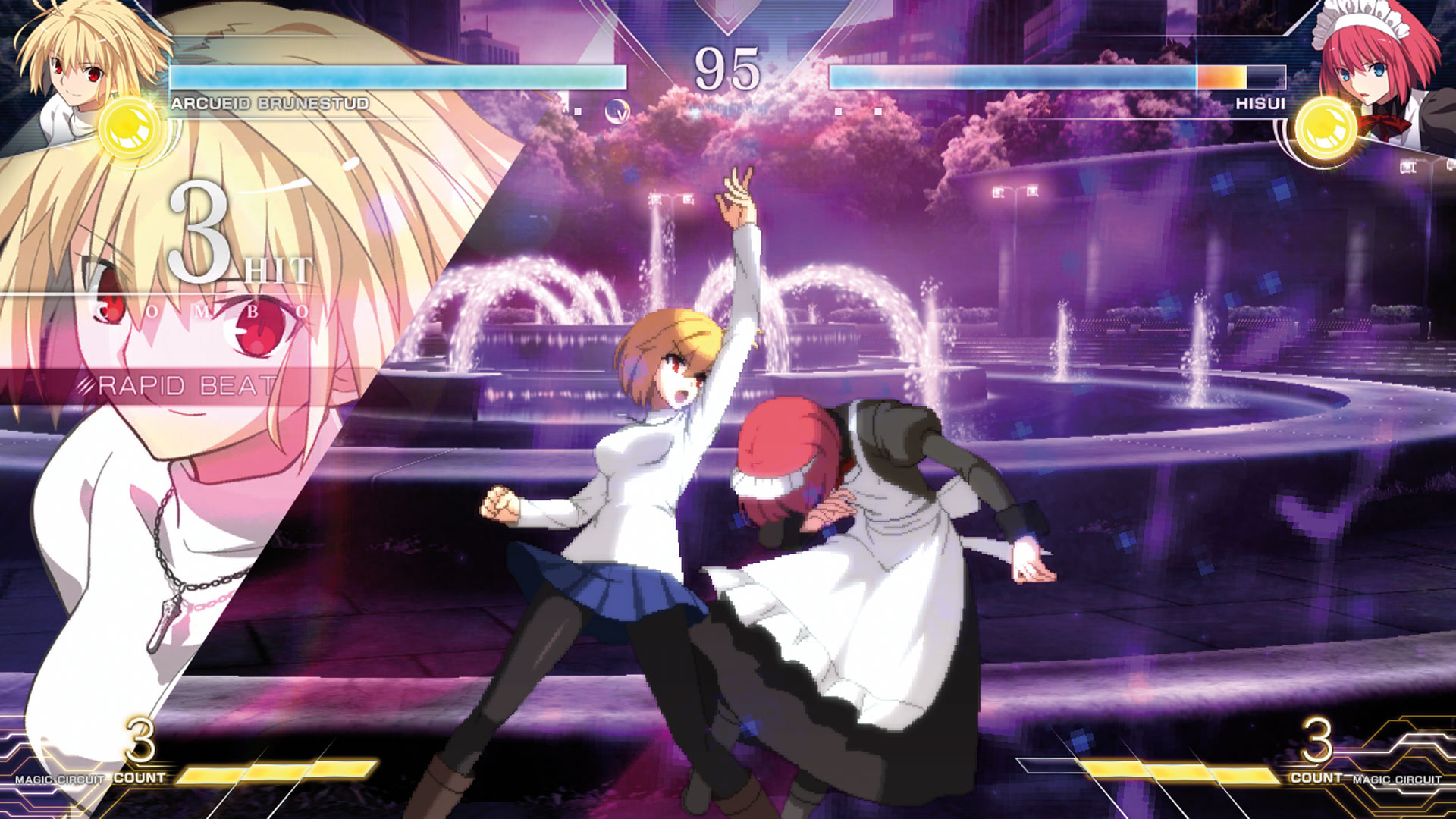 One thing I was able to appreciate — and perhaps criticise — as a consequence of my time playing the story was the visual aspect of Melty Blood Type Lumina. The first thing that stands out here is the conservative nature of the character design, especially considering the Anime roots of this series. In short, most characters look entirely human, and in most cases they are wearing regular outfits, or at their most elaborate, what you might consider normal cosplay at a Comicon event. There are no outlandish or inhuman character designs.

I can actually get behind this — the focus becomes on what each character has as a moveset rather than on how they look, or what kind of moves their size or shape might allow. On the more negative side is the selection of backdrops — which are all very static and in the main, quite boring. Backgrounds in Melty Blood Type Lumina are completely in line with the characters (conservative, as I said) but they are also slightly detached from the sprite-based characters moving in front of them, and I just didn’t like them, frankly. 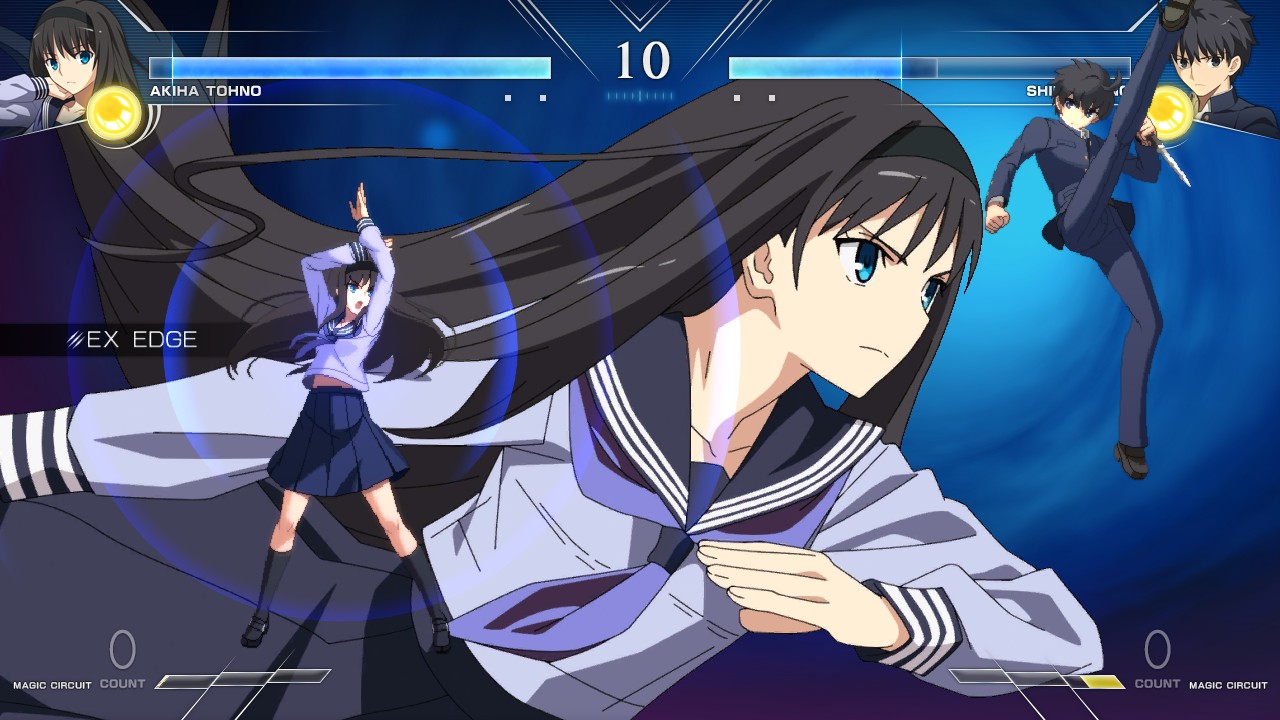 Coming to what really matters in a fighting game — mechanics — and I am almost at a loss as to how I can possibly cover everything that Melty Blood Type Lumina packs in. Starting with the basics; Melty Blood Type Lumina offers a couple of saving graces for players like me. Firstly players can block freely (a nice bonus these days) but they can also shield (which may allow a selection of powerful counters to be used). There is a powerful autocombo for each character, and special moves can be accessed with a single button plus d-pad input.

Throws are powerful and will kind of “lock” onto the opponent, with your character moving into range automatically, and there are even super moves that are accessible with basic inputs — most of which get much more powerful with the lower your health is. If all of this sounds powerful and fun to use — then you should know that it is, and against the AI, you’ll have a great time learning how to gain an edge. 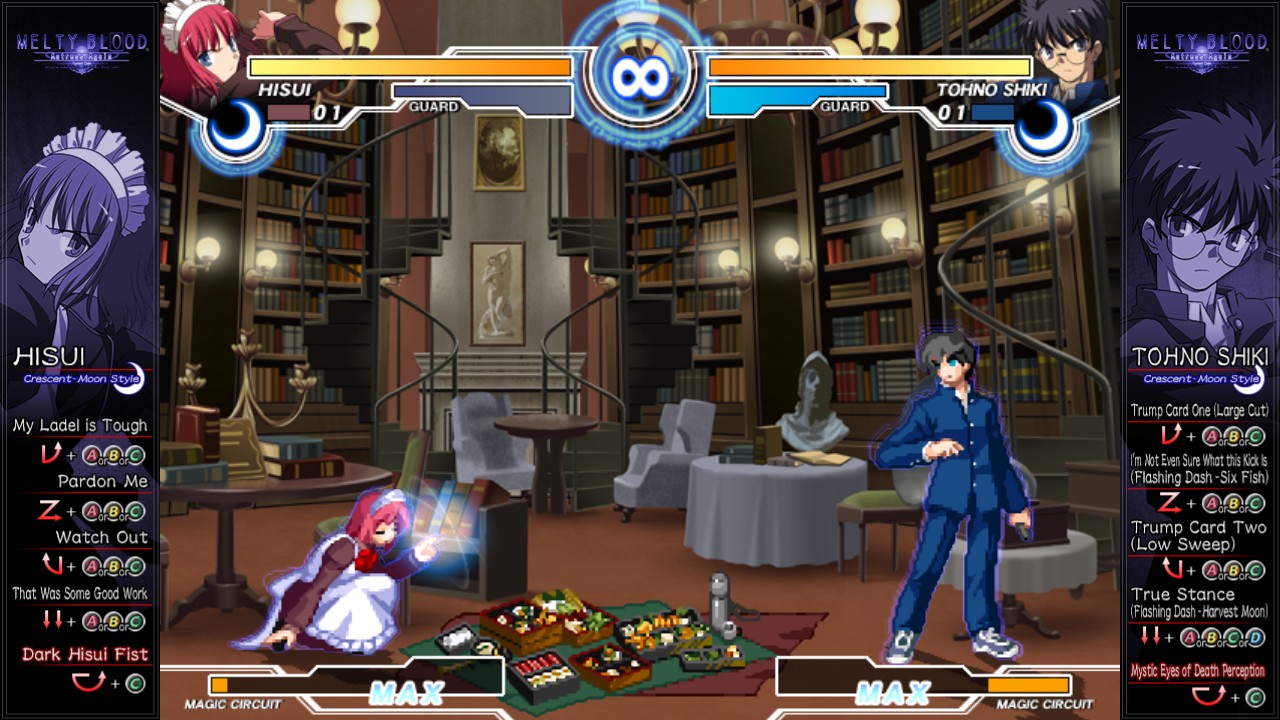 As you do that, you’ll unlock more and more nuanced mechanics which will increase your overall competence — which is very important should you take the fight online (and Melty Blood Type Lumina has superb, stable netcode). Dashes, air dashing, double jumping — or even triple jumping depending on your use of a Moon Gauge that I haven’t mentioned yet — it’s all there. There are even super jumps that take a fighter straight into the action, and those counters I mentioned? One throws the opponent, another takes you behind them and so on.

As a toolbox of interesting and powerful mechanics that caters for both total novices and experienced fighting game veterans, Melty Blood Type Lumina really impressed me. I may not love the visuals (especially the backgrounds) but I haven’t experienced a game as mechanically comprehensive as this for a long time, and even I, as someone who doesn’t get on with modern fighting games, can find almost only positives in Melty Blood Type Lumina.

You can grab Melty Blood: Type Lumina on Xbox.