Looking after fish is hard work — they eat, they crap, they fight, they die — in my experience anyway. If only I had a game like Megaquarium in the earlier days I may have learnt a thing or too, and possibly even avoided the experience totally.

Megaquarium is the latest in the long line of “Tycoon” games, along the mould of Theme Park and Theme Hospital, wherein, you are given a plot of land, some cash, and some sort of goal to literally build towards. But this one, rather unsurprisingly, is about building an aquarium. 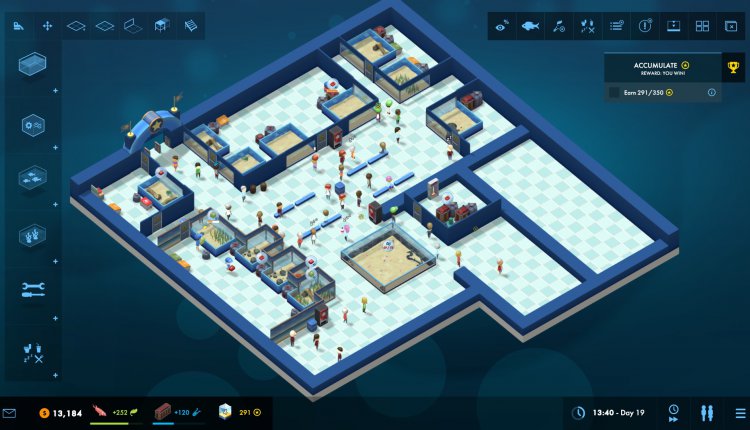 Like most tycoon games, Megaquarium holds your hands a lot at the beginning, explaining the mechanics and whatnot, then building on that, level by level, until you are given free reign to do as you please.

You start off with just the most basic of tanks, and the smallest and easiest of fish to deal with, and you are shown a LOT of information right off the bat. Each type of fish has some very specific care requirements to keep them healthy that you must meet with your tank. Variables such as water temperature, and cleanliness of the water  So, you set up some little tanks with a basic filter and a basic heater, then start filling your tanks up with your nice new fish, and things immediately start to go south, but in a good way. The more fish you have the dirtier the water, so you add another filter to clean that out, and for a while, you are fine. Then the heater breaks, and you have to make sure you have the staff to fix it (I’ll get to those soon). 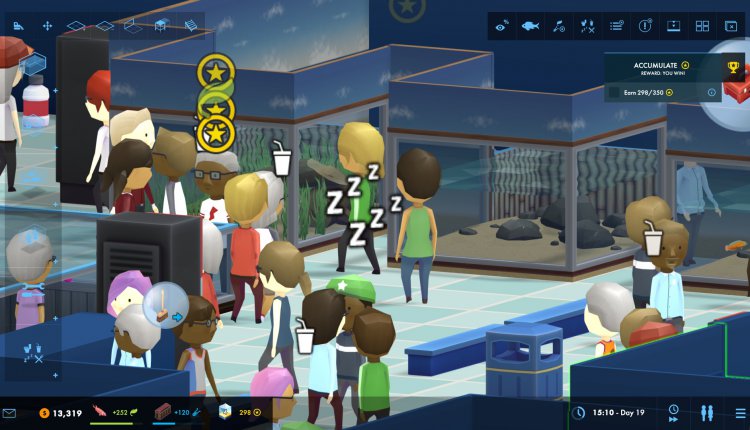 Megaquarium keeps escalating like this, and very quickly your setups are going to get very complex, and you have to be very careful with what you mix and match. Some fish grow, so if you have too many, they will take up too much space in the tank. Some fish will eat others. some you can only have one of, some need space to hide. There are Tons of different combos to take into consideration when building your tanks, as the more variety you have the better you do, the more prestige you get, and the more research points you get.

Research is how you unlock new tanks, fish, and tech. It is split into two different categories: Nature and Science. You earn research points by pleasing guests: looking at your exhibits, and different fish and other items will give you differing amounts, and it is up to you to find the best combos to maximise your income of these research points to unlock new items quicker. Research is a big part of the game, and may be part of the scenario you are playing at the time, to unlock a certain tech or just wanting to unlock more fish to generate more prestige. One thing that did annoy however, is that research did not stick between levels, and always knocked you back a bit. So, if I had unlocked a certain fish on level, it would be gone and I would have to research it again on the next. Not a major issue, but a small gripe nonetheless. 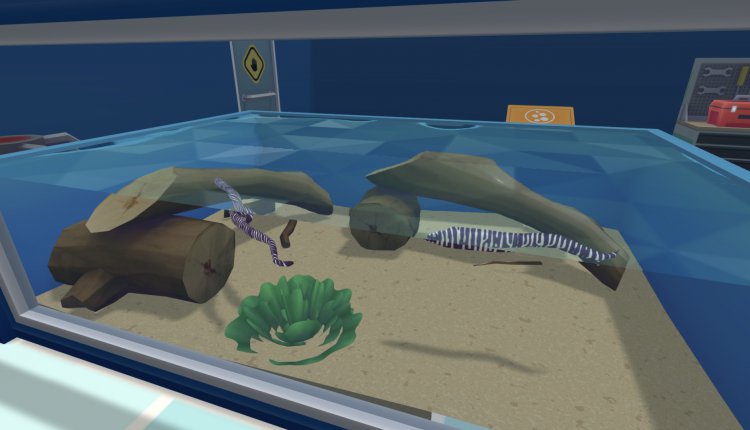 Prestige is how good punters think your aquarium is and, like the research points, you get these when visitors look at your exhibits. This is manly used for parts of the scenario, as in you will need a certain amount to continue to the next section, so it is similar to the park value of a game like Rollercoaster Tycoon in that respect. However, this is a part of Megaquarium that can feel like a bit of a grind, as it is a constant tug of war with the number going up and down, sometimes seemingly for no reason. You can only get points from each customer once per attraction, so it relies on more and more people and attractions the further you go along.

Staff of course are needed to help with the upkeep of your aquarium, and is a fairly simple affair. Each staff member will have stats in various areas, such as feeding, fixing, etc, and when hired just walk in through the front door. Unlike games such as Theme Hospital, you cannot pick up and move your staff to place them where you need them, however, you can set up regions that they will patrol, and this becomes very important later on when your aquariums get much larger and you start to  unlock some very specialised fish. 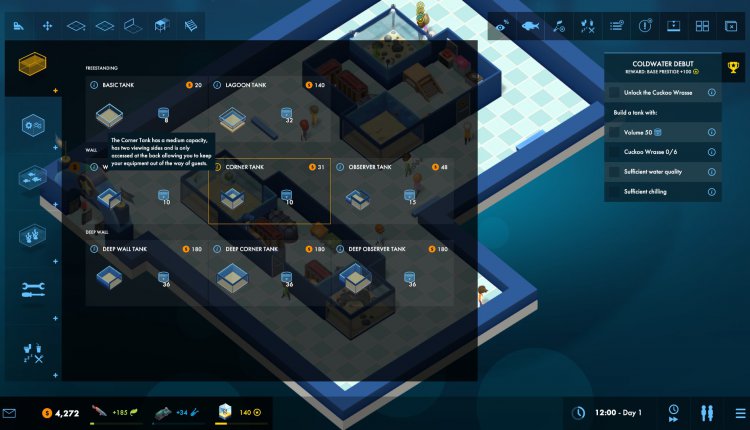 The scenarios are standard fare for this type of game. Research this, unlock that, get so many points, but there are also extra parts to these that can unlock special decorations, or special fish. These are given to you on a limited basis, just for that level, so if you go out of your way for these items then you can easily get a bit of a bonus to your prestige and research.

The game plays very well, and you can play the whole thing with just the mouse if you would like. You click and drag to draw your tanks in, expand your buildings, and decorate and place fish with simple left clicks. Right click pans the camera, and middle mouse rotates the viewpoint (on both axis at the same time, take note Two Point Hospital). I spent most of my time with this game playing through it with my wife in the living room on the Steam controller. This goes to show that the UI is both clean and readable at a distance. All of the information panes are excellently designed, with all the information presented clearly. There is also a line of buttons in the top right, which would toggle icons on and off, pertaining to the status of the various tanks. This is a massive plus for an at-a-glance look at any issue you might be suffering. 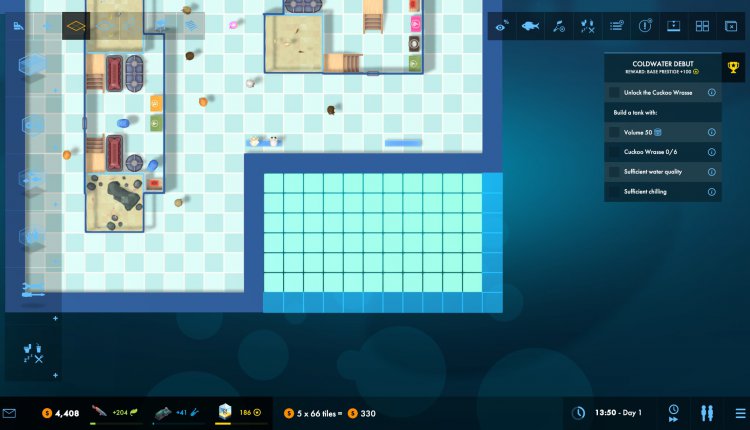 We only had access to a 10 level career mode here, but a sandbox mode will be included in the full release, and hopefully more levels. But, if you have just blasted through Two Point Hospital and are looking for more in the same vein, why not take care of some fish instead of humans this time around?