Lord of the Rings: The Card Game — Revised Core Set is a great place to begin your Fellowship

A little while ago, I was lucky enough to review the Lord of the Rings Adventure Card Game on Xbox and I really enjoyed it. As I was researching that review, I realised that the digital release was actually based on a board game — Lord of the Rings: The Card Game. This just happens to be a living card game from Fantasy Flight Games, and even more fortuitously, it turns out that FFG were just in the process of releasing a new version of the game known as the “Revised Core Set.”

In Lord of the Rings: The Card Game – Revised Core Set, one to four players will experience three stories from the Lord of the Rings universe which can either be chained together as a campaign (which is brand new for this edition) or tackled as standalone scenarios. To do this, they will choose one of four starter decks (and later build their own) featuring three heroes and numerous ally’s, events and weapons which they will take on epic quests. 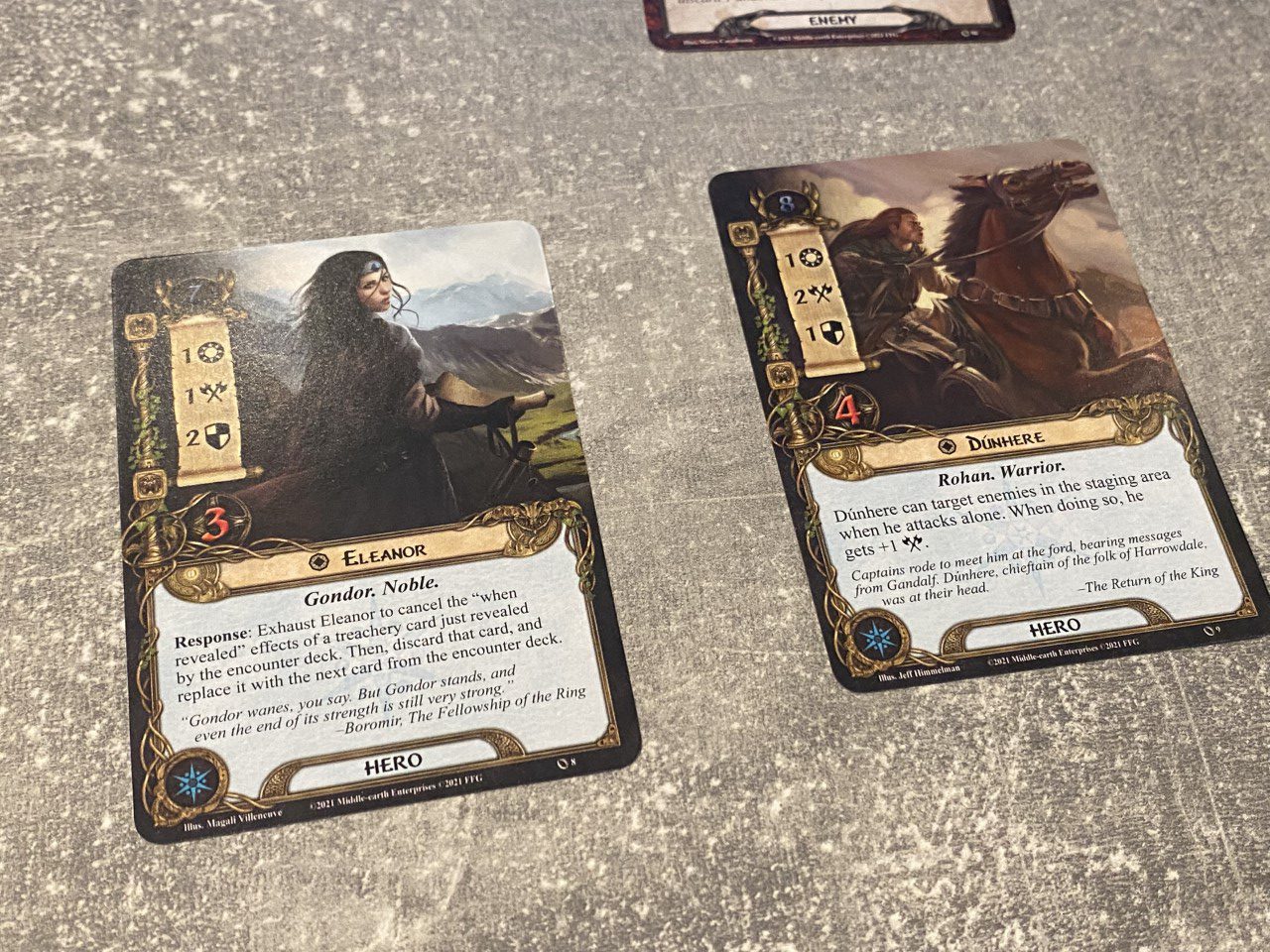 Because Lord of the Rings: The Card Game has been out for a while in its original form, there are already multiple expansions which feature more quests, more heroes, more enemies and potentially other game-changing cards that I haven’t encountered yet. FFG are also likely to update some of the bigger boxes to include new content based on the release of Lord of the Rings: The Card Game – Revised Core Set, so if this is a game you enjoy, you’ll almost certainly be able to access more of it.

The good thing about “living” card games (rather than “trading” or “collectible” card games is that each set comes with predefined contents. There are no random boosters or “surprises” in these boxes, so players know that in order to expand a set, get a particular hero (or whatever) they just need to buy into whichever box relates to that content. This doesn’t mean that Lord of the Rings: The Card Game is super cheap to get into if you want everything released, but the cost is at least modular and predictable. 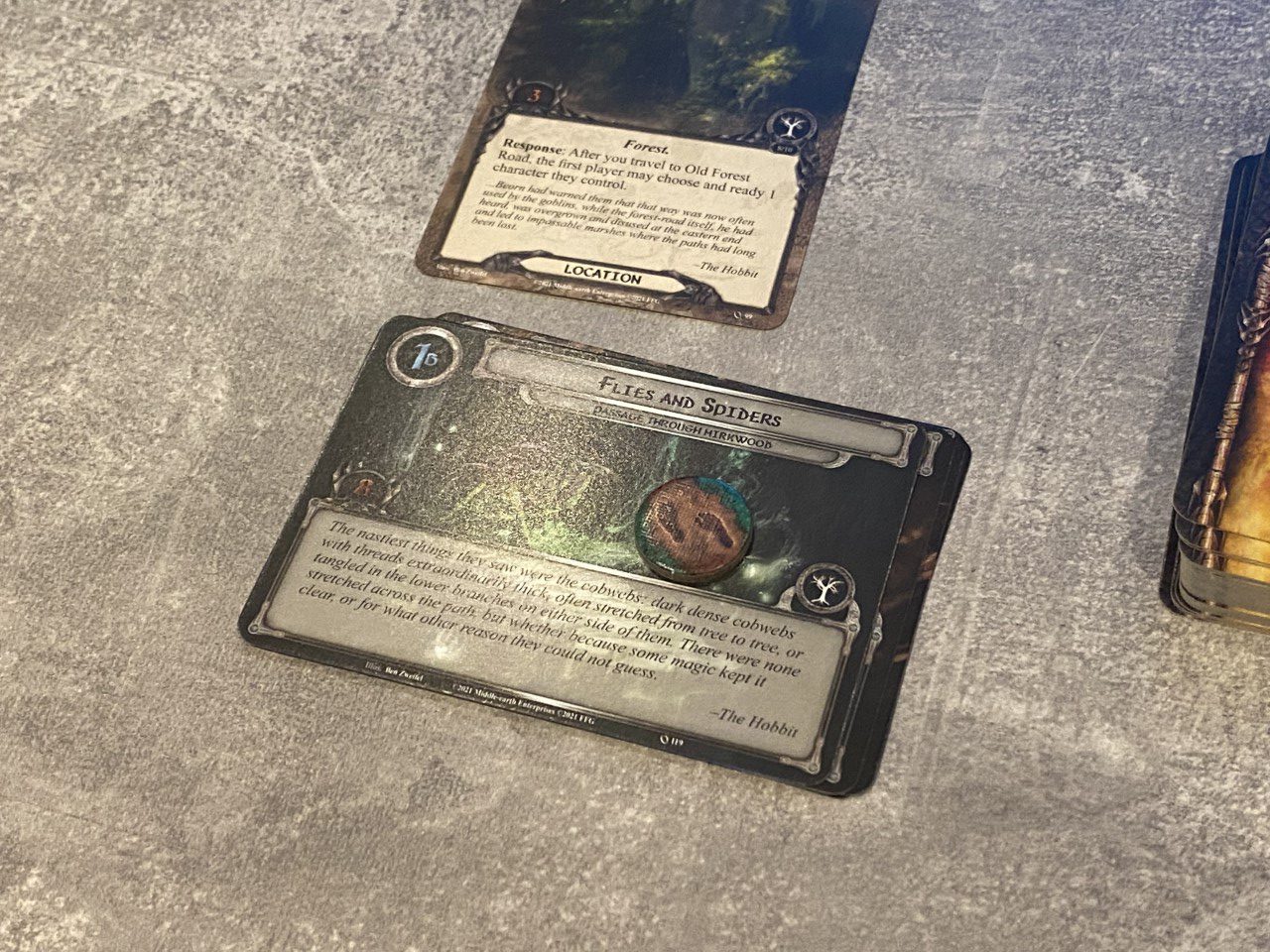 In terms of the base Lord of the Rings: The Card Game – Revised Core Set release, the good news is that this is now a much more generous release than the original core set. The problem with the original version was that despite the game supporting up to four players, the base game didn’t include enough of the generic cards to actually build four decks, and the starter decks were a bit fiddly to build up. This increased the barrier of entry to new players and put a few people off.

In Lord of the Rings: The Card Game – Revised Core Set players have access to four complete starter decks (including eight copies of Gandalf — two per deck) to illustrate the point. Each deck is based on a single characteristic (known as a sphere) — leadership, might, spirit and lore based on the symbols and background colour shown on the card. As players become more familiar with the game and begin deckbuilding, they can use heroes and cards from different spheres to build a better overall deck, at the risk of accepting that cards in hand can only be played by spending resources associated with a hero from the same sphere.

In a nutshell, this makes Lord of the Rings: The Card Game – Revised Core Set a really good way to start the hobby and decide if you like the idea — but how do you know if this is a game for you? Well, again, because this LCG has the same foundations as the Lord of the Rings Adventure Card Game, you may wish to start there and have a few trial games, but obviously nothing feels quite as good as shuffling through a deck of freshly cut cards, so let me tell you a bit about the game in physical form. 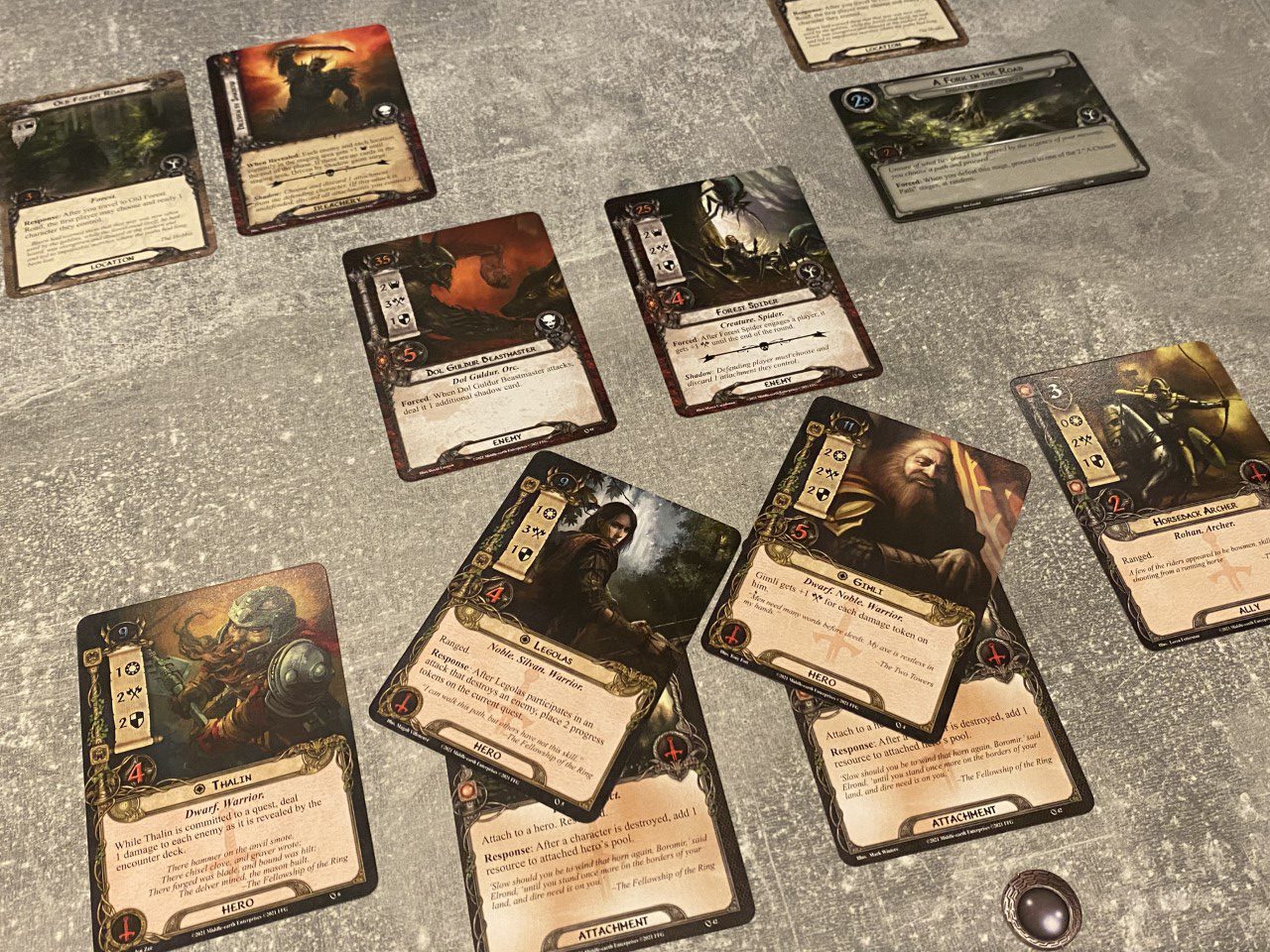 At first, Lord of the Rings Adventure Card Game comes across as a bit of a heavyweight. Setup is fast enough with player decks easy to sort (unless you’re doing the deck-building there and then) and the enemy Encounter deck easily identified based on the current quest. The only components besides cards are a first player token and then a handful each of wound, progress and resource tokens. As always, FFG helpfully includes a Learn to Play booklet and a detailed rules glossary, and the starting scenario is basically spoon-fed to the players.

Even so, there are multiple phases to consider and it can take a few rounds to get into the flow. Thankfully, playing the game solo is completely fine and the difficulty scales based on the number of players — so I found it useful to learn the game in advance by myself, and then walk my friends through it. Each turn in Lord of the Rings Adventure Card Game comprises around seven phases, but somewhat unusually, the players are actually active for most of these.

To paraphrase briefly, each round begins with the players drawing one card and taking one resource token for each hero. They may then play cards from their hand by spending those resources (respecting the spheres alignment that I mentioned earlier, which is never a problem when using the starter decks).

Players will then move through the Questing and Encounter phases, before undertaking Combat. There are similarities in how Questing and Combat plays out, but Questing puts the focus on the Willpower of characters, whilst Combat is – unsurprisingly – about their might. This is one way in which Lord of the Rings Adventure Card Game allows characters who might seem weak to really shine — because they can progress quests and explore locations efficiently due to their Willpower. 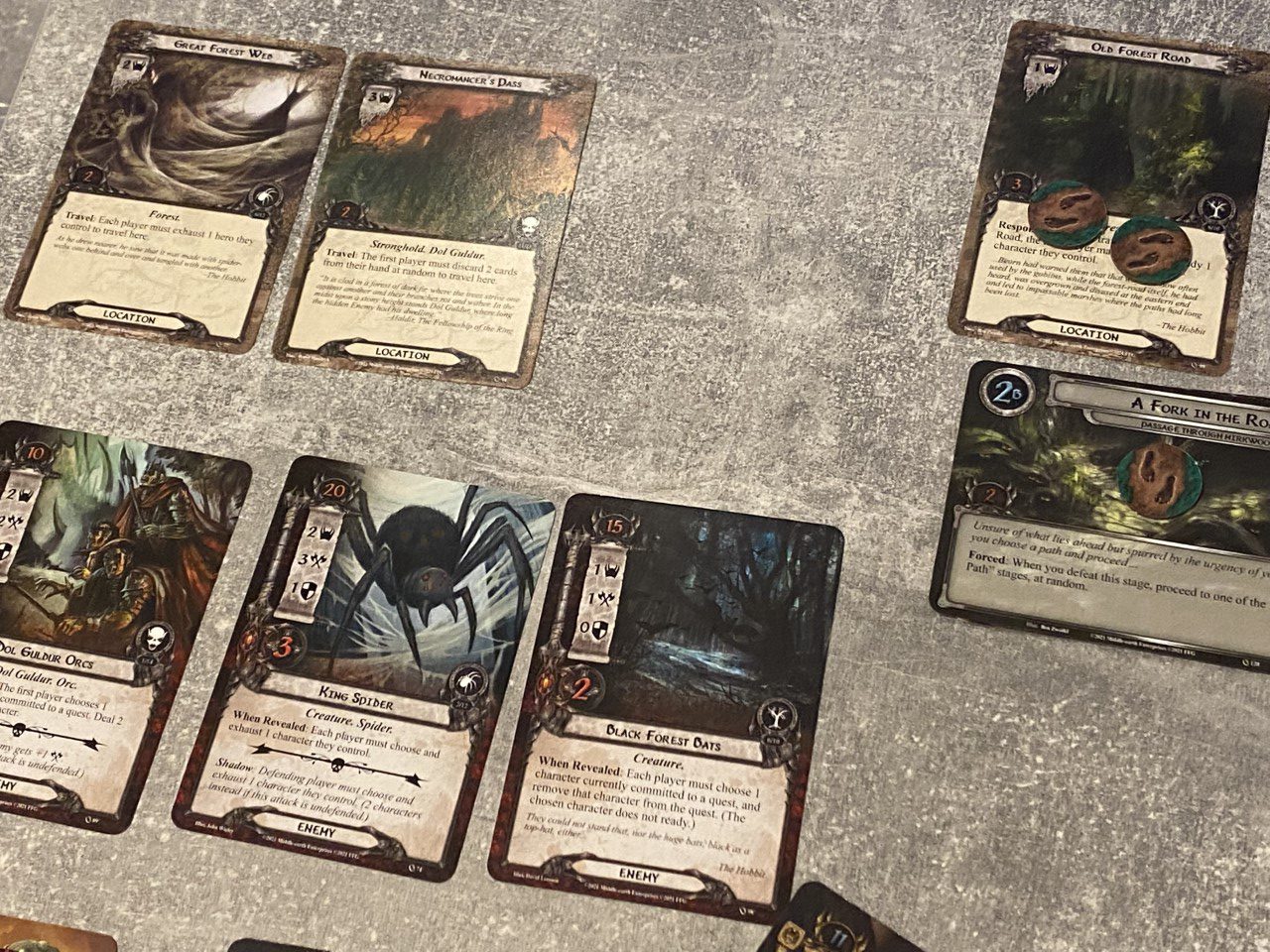 As players begin to customise their decks then, they may choose to specialise in particular areas such as Willpower or Might, or they might want to focus on supporting other players. If you’re going to play Lord of the Rings Adventure Card Game solo, then you’re likely to either have to play with two starter decks (one focussed on Willpower and the other on Might, for example) as though you were in a two player game, or you’ll have to customise one deck to cover both aspects.

However you do it, you’ll need to manipulate your way through questing — which involves using Willpower to overcome the enemies in the staging area to put progress tokens on an objective — and fight off any immediate threats. Without getting into low level detail, characters in Lord of the Rings Adventure Card Game are exhausted (turned sideways) when they quest or fight, and if you don’t have any unexhausted characters ready to defend (because they are all questing, for example) enemies will hit your heroes directly, leaving them unable to use their defend value — this is bad.

As location and quest cards are defeated via progress tokens, new quest cards come into play which might have new instructions or dangers on them. For example in the finale of the Escape From Mirkwood quest, the players choose one of two cards at random and either deal with a tough quest card (requiring lots of willpower) or have to face off against a particularly tough giant spider. Situations like this are often random and/or unknown to the player, so creating balanced decks or taking complementary starter decks becomes all the more important to success. 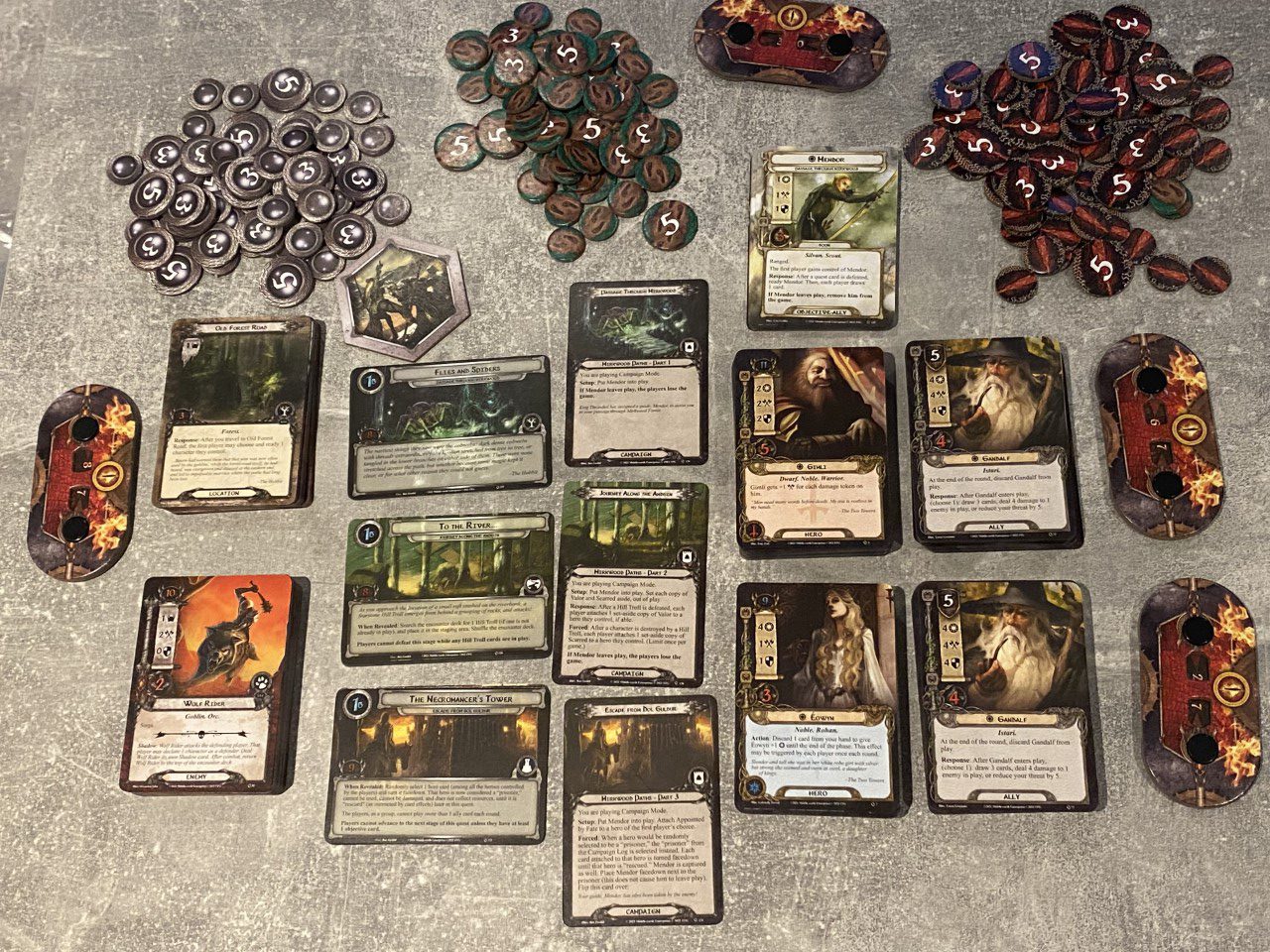 What jumps out to me about Lord of the Rings Adventure Card Game is how thematic it is, both because it has exceptionally beautiful, detailed artwork and because the gameplay feels very reminiscent of the Lord of the Rings world. Everyone has a role to play no matter how big or small, and there are many nods to the story that fans will recognise. An example that I love is that of the Gandalf card — who arrives, does one of several powerful things and then disappears into your discard pile.

Overall, Lord of the Rings Adventure Card Game is very attractive and it feels very complete in terms of what comes in the box. Where I have played FFG Living Card Games in the past, I have suffered from the “old business model” of including a less than full set of cards and demanding players deckbuild right from the outset — that’s not a problem here. If there is a downside, it’s only that I got through the first three quests relatively quickly and I am dead keen to see what else the game has to offer — but hopefully I’ll get my hands on more expansions going forwards.

You can find Lord of the Rings LCG – Revised Core Set at the best price via BoardGamePrices, or check out your local game shop.

Looking back at The Lord of the Rings Adventure Card Game: Definitive Edition