Loot Rascals, from developer Hollow Ponds, was at the recent PC Gamer Weekender ahead of it’s launch this month. Dann got some alone-time with the game and wrote up his impressions on it below. 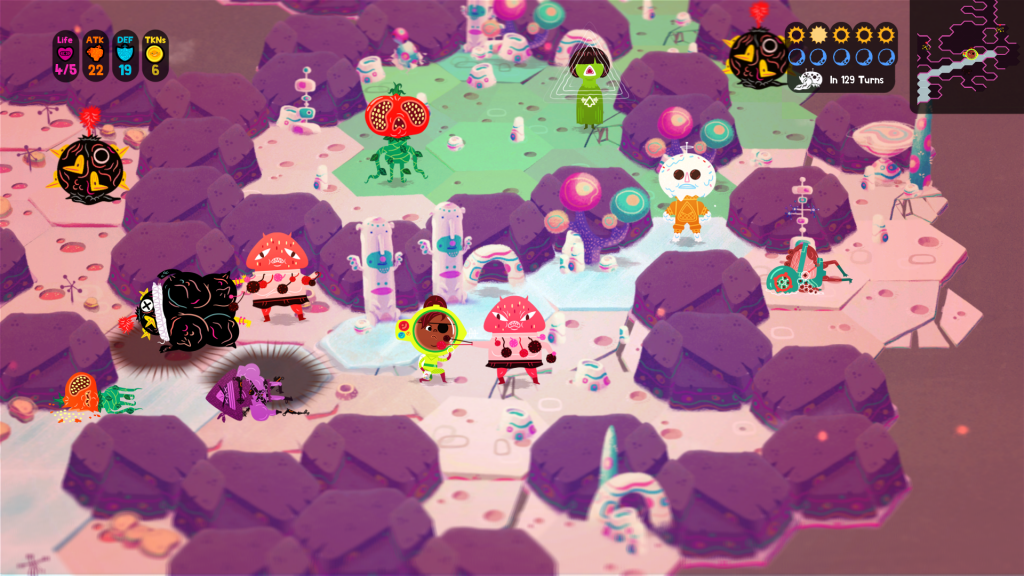 Loot Rascals is a game that has popped in and out of my awareness since it was first announced back in May of last year. It’s a turn-based roguelike with a card based equipment system and character aplenty. It’s also dangerously easy to get into, albeit -as one would expect- hard to master.

Let’s get things straight, Loot Rascals revolves around two things, stats and kiting. The world is beautiful, the other mechanics are clever, and the titular rascals are devious and so unique they really look like they were ripped from some 90s collectable card game. But, strip that away and it’s an exceedingly well made game about stats, and kiting.

The game’s premise is simple, you’re a space repair-person heading off with your Northern accented G.E.N.I.E pal to fix up Big Barry, a giant robot that distributes Liquid Anything – a fluid which can build… anything! In this instance Big Barry was tasked with setting up a holiday resort, however for some reason he’s scuffed it up and so you’re off to find out what’s up, with the consensus being that you’re simply going to have to fix an aerial.

In fact, the planet (split into five zones) is completely covered by a wide variety of strange, savage enemies, and so you have to use your tact to best the foes as you travel through the procedurally generated areas (in order) as to recover Big Barry and make your escape. 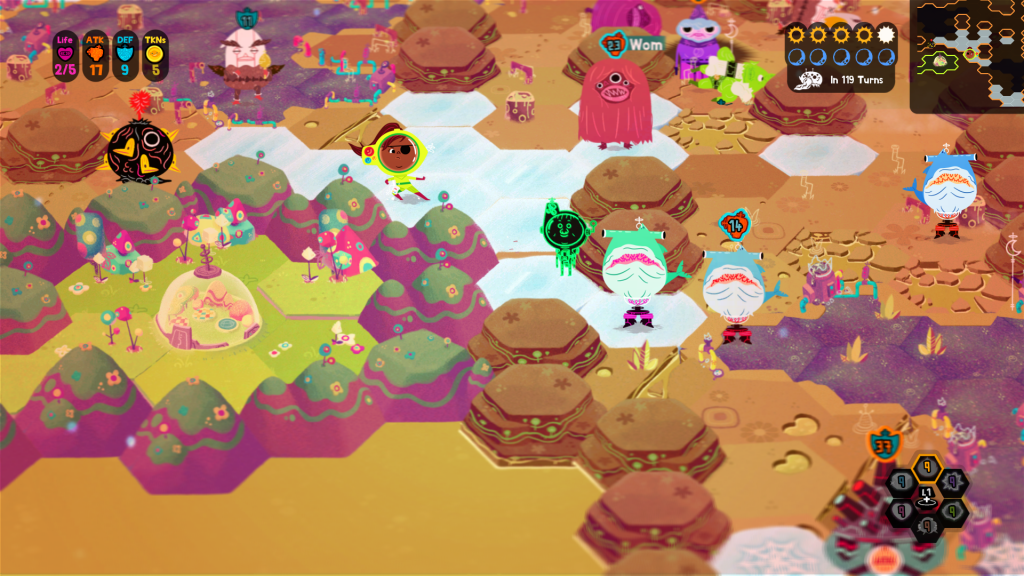 Each of the game worlds are split into a mass of hexagons, which you can move freely around within and over. Everytime you cross the threshold between two, however, a turn is used up and enemies also make their move. This means that there’s ample time to have a look around, despite the ticking timer.

Every five turns the time of day changes, and this is really the crux of the game. Each enemy is either in a state of attacking or defence at any given point in time, you’ll want to attack when they are defending so that you get the first hit, and you’ll want to do that because you’ve only got five health points.

The maths for damage is done based on offensive vs defensive stats, with the different making the amount taken as damage – some enemies are especailly powerful, and so you’ll want to fully abuse the ability to land the first hit as often as you can. Indeed, the game is really about engaging enemies at the right time of day so that you can wipe them out before they hurt you.  This may sound hard, but combat itself is automated, and the game is balanced well enough that -and please don’t take this as boring- many of the enemies will die in one hit.

In a way the game almost starts to feel like a rhythm game, with clever placement and timing allowing you to kill a string of enemies one-after another as the daytime shifts through your manoeuvres. 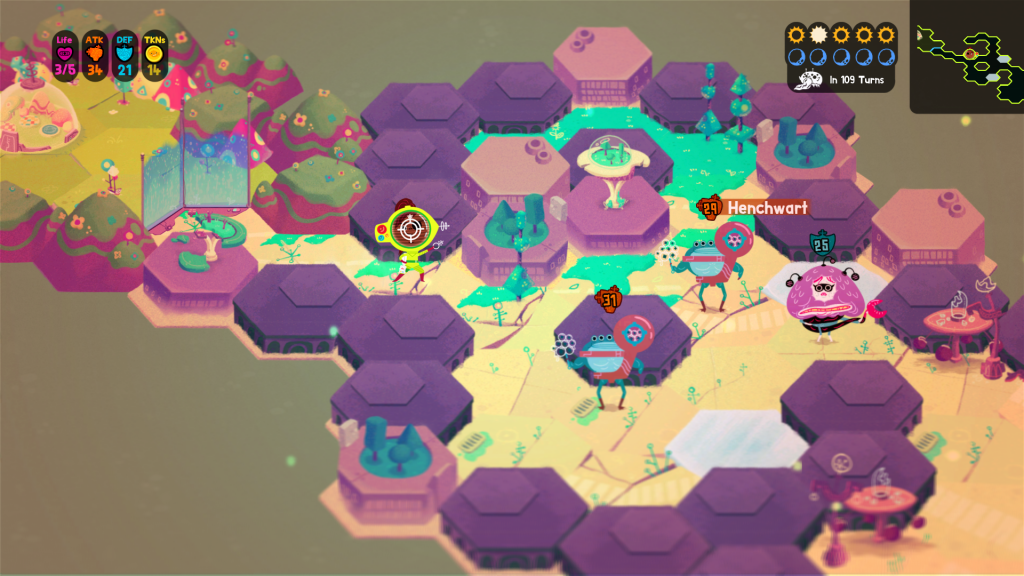 It’s spiced up a little more with special enemy types. If you take too long (turn-wise) on a level then harder enemies will deploy, there’s also enemies like the Night Wizurd who force the adjacent hexes to night-time, and there’s also unnecessarily powerful bosses.

Because combat plays out automatically it results in one of two things; death or victory. With victory comes the chance to get a card, with many enemies dropping them. There’s a whole variety of cards; attack equipment, defence equipment, magic, and enhancement.

I was a little bit dubious of the card system at first, but that was really not required, as it turns out that really it’s just a heavily styled take on an equipment/inventory screen.

In the card screen you have slots for two rows of five cards, cards can be dropped in any of the slots, and once in place they give you any benefits associated with them, be that a stat boost or access to a spell. Where it gets interesting is that many of the cards have additional rules, some early ones requesting you have cards in certain directions of them, while others require certain types in adjacency, or even for the player to have multiple of the same cards for the bonus. 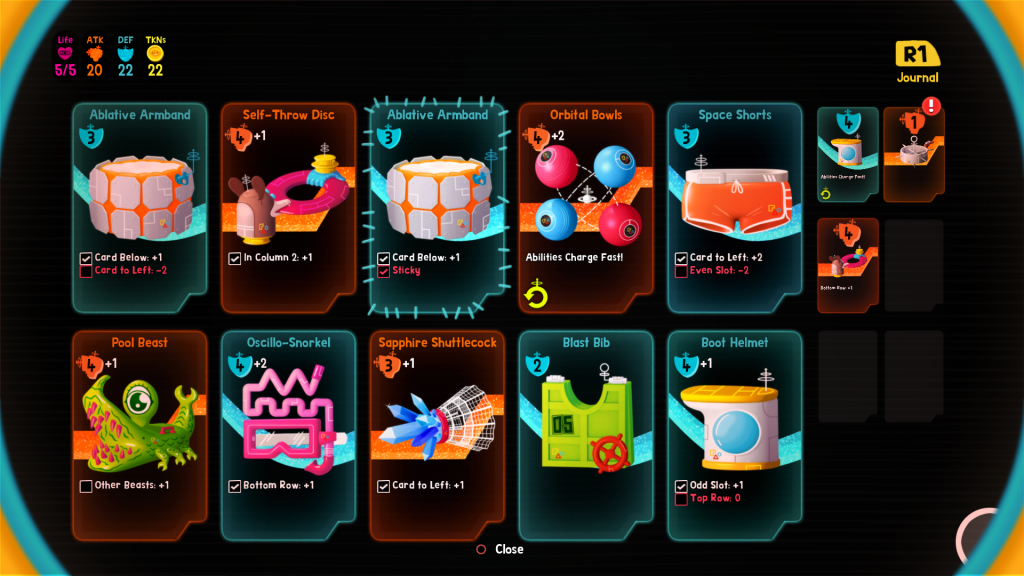 Where the card system gets really interesting is when it starts combining cards into stacked equipment, or you get to start buffing cards with add-ons. I gained a card which absorbed the bonuses of all of my attack cards into one new card, it was a complete game-changer, and the main reason that my first effort saw me nearly breaking through into the third level.

Additional cards can be melted down, which gives the ability to heal, albeit only by teleporting back to the start of the level. Still, surely that’s better than dying?

Being a roguelike game death is final for your loadout, with all of your current set-up lost to the wind as you start back at level one (once you’ve been reassembled by an otherworldly being). However, there is a slight twist, namely that your most powerful card is actually fed into the server where it can be rescued and returned to you by another player over the internet.

Similarly, the same can happen in your games, when you fight a monster that’s carrying a fallen character’s card you are given the choice to return it (and gain a temporary ally), or keep it for yourself (and deck the ally). A pretty cool system, if you ask me.

There is, for the moment, little else to say about Loot Rascal’s mechanics. The magic is a great addition – it’s ranged and deadly. The world and baddies are wonderful, Ice is slippy, fire is hot, the enemies repeat, but never get boring, The music is great,  floaty at times, jazzy at other times, like a 60’s prediction of the sound of the future.