Lizard Review — An Echo From the Past

Retro games have had a surge in popularity over the last couple of years, especially among independent developers who embrace their simplicity, budget-friendly graphic design and manageable scope. Most of these games are retro games in style and, as such, feature pixelated graphics and self-imposed limitations as to reflect those from the old days. Lizard, developed and published by Brad Smith, takes a different route and does not only look like an 8-bit game, but is actually one.

Lizard, from Brad Smith, was developed to run on the actual hardware of the Nintendo Entertainment System. It can be purchased on a cartridge, but is also available for your home computer. It is a platformer in which you, contrary to popular believe, do not take on the role of the titular lizard.

Instead, you play as a naked, little human who wears the skin of various lizards, each of these having different abilities. Your basic form, the Lizard of Knowledge, can decipher ancient inscriptions. The other lizards help you to overcome various obstacles — they can push blocks, melt ice, swim or jump really far. 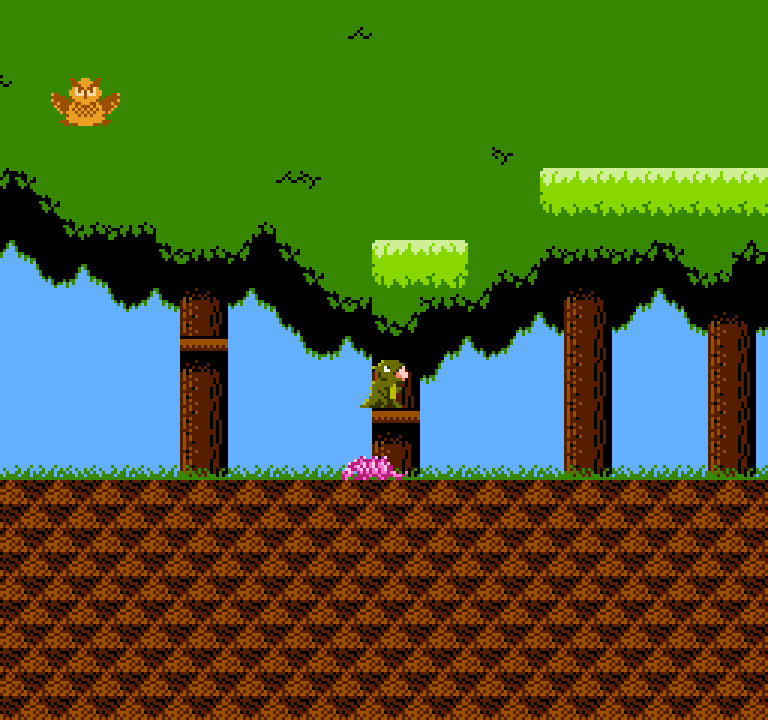 All these abilities are required to navigate the world of the game. Said world has to be explored both vertically and horizontally, primarily via platforming. The game world is comparably small, but many areas can be accessed right from the start and there a few hints that tell you where to go first. Thankfully, the authentic, NES-style manual provides you with a map.

Lizard is filled with other creatures, most of which are hostile. Be it talking panda bears, miniscule poison frogs or bizarre insect-like beings, they all want your blood. Some opponents can be overcome with a classic jump on the head, or even be used as a platform, but most of them turn your lizard-wearing protagonist into a skeleton with a single hit — a lizard skeleton, curiously. The bosses in Lizard are some of the few monsters that need to be destroyed.

Most enemies are best avoided by simply jumping over them. Jumping is no easy task. Even though only one part of the world of Lizard is a snow-covered peak, the entire game has ice physics. You gain momentum whenever you move, which makes stopping completely dead tricky. At the same time, your basic jump has almost no reach and running leaps are necessary. 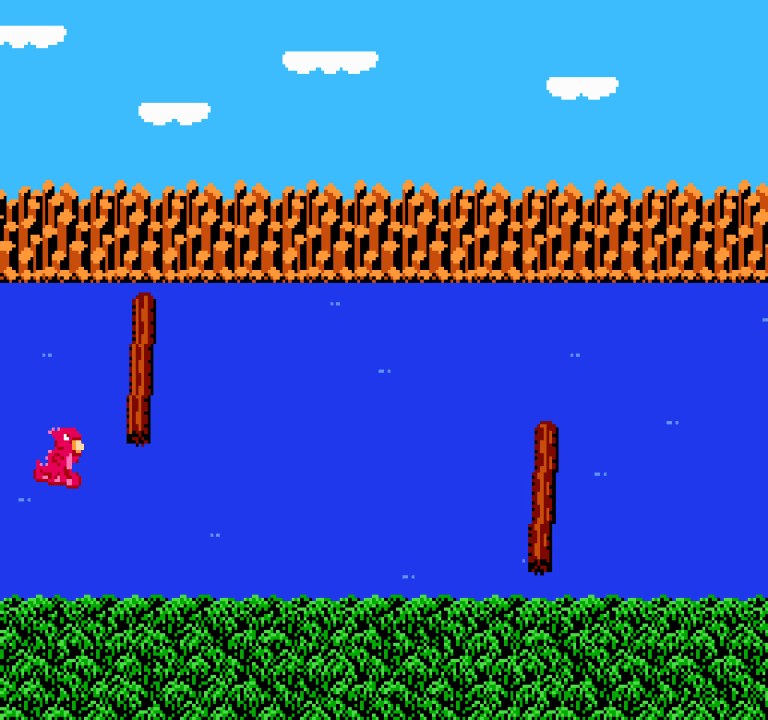 Lizard’s slippery jumping is in tune with many an old 8-bit game. As such it can be considered authentic, but taking into account that even during the heyday of 8-bit platformers, games with more reliable physics were available, they will not be a welcome addition for everyone. However, Lizard grants you unlimited lives, which also balances the fairly sparse checkpoints.

Lizard skins aside, Lizard is a simple game. There are almost no additional mechanics. The various lizards barely add to the gameplay. The Lizard of Bounce, who lets you hop around with even less control over your character than usual, is one of the few who gives you the feeling that you are playing as someone else. Most other characters function more like key items.

Graphically, Lizard keeps things simple. Most backgrounds are plain and monochromatic. The various areas are a patchwork of basic video game environments such a forest, a ruin, caves, a snowy mountain peak or the obligatory water area. The quality of the spirtes is good and most non-fantasy creatures can easily be identified as they animals they are supposed to be. Overall, the graphics are a bit better than those of early NES titles, but fall behind later releases.

The performance on the other hand, is excellent. There is virtually no load time between screens, no sprite flickering, and no slowdown. The frame rate remains steady, probably also because Lizard never overloads the screen with too many sprites in the first place. 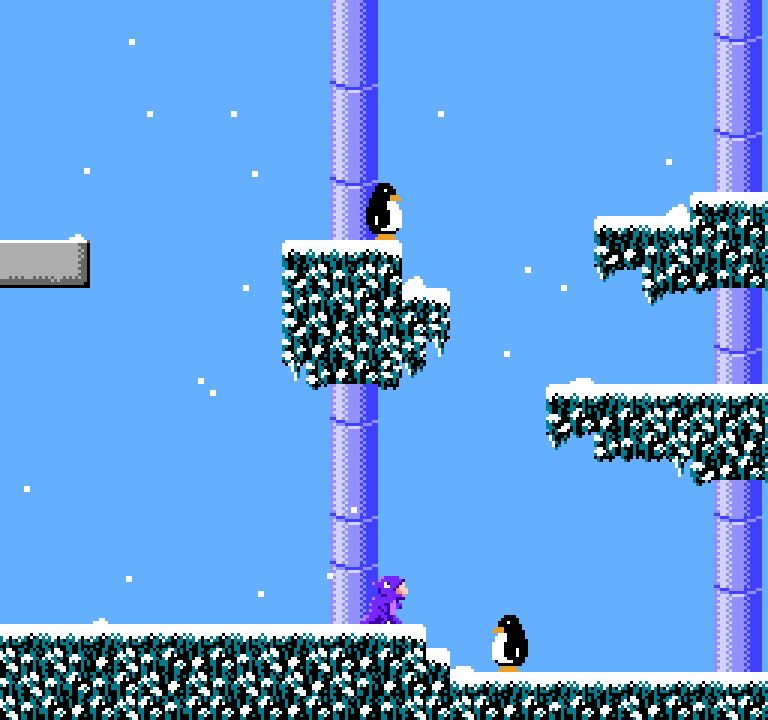 Equally good is the soundtrack. All tunes are moody and fit the game’s atmosphere. However, those who do not wish to dust off their NES to enjoy the game can simply play the computer version, which is virtually identical to the NES variant.

Despite the good performance, Lizard lacks personality and depth. The game’s ending, and some of the inscriptions, hint at a story, but nothing is explained or mentioned in the manual. No direction is given other than to find more lizard hides and use them to overcome obstacles as to find even more hides. 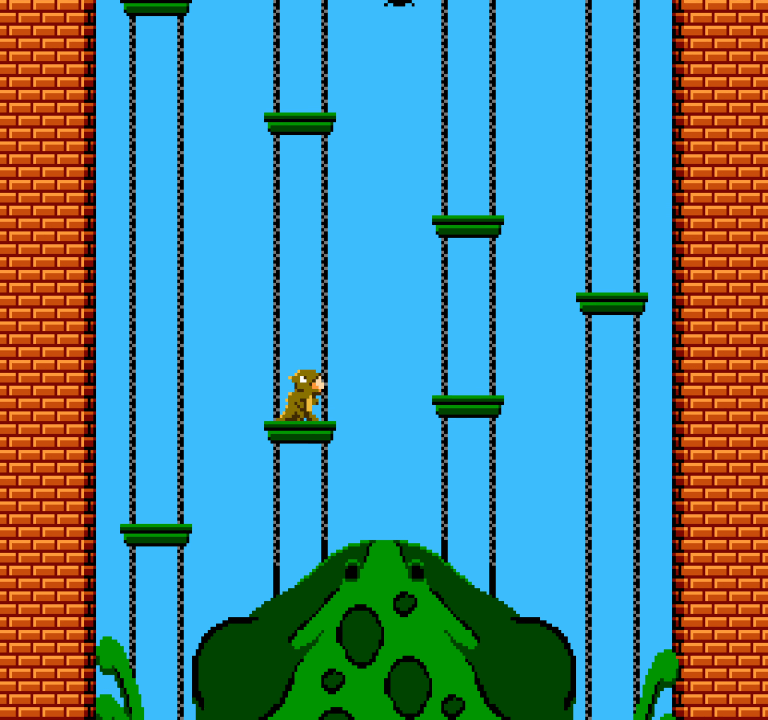 The enemies and environments are fairly generic. The gameplay is as simple as that of some early arcade entries. While it is understandable that Lizard aims to be like a product of the NES era instead of a new game with an 8-bit paint job, it remains a lacklustre experience.

Overall, Lizard is an authentic NES game, but it embraces the legacy of the 8-bit era perhaps a bit too much, while at the same time falling behind its peers in many regards.