Lionheart: a Game Full of Fond Recollections and New Experiences

Lionheart is a game that is full of fond recollections and new experiences.

I remember the first time I saw someone playing a turn-based RPG. The game was Final Fantasy 7 and I was hooked on the style of play. Lionheart is a turn-based RPG and a visual novel. A marriage made in heaven for this gamer.

Lionheart has all of the same nuances you expect from turn-based battles. Setting your formations for fighters, using special items to enhance your party, ect. Additionally, it has the infamous RPG grind. 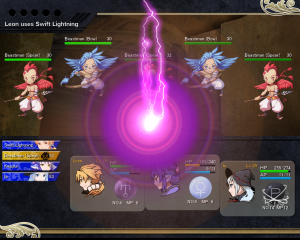 Personally, I enjoy trudging through battles and grinding for levels. It is relaxing and mindless, in a good way. Thankfully, for those of you who love a good progression, Lionheart delivers here as well. It will take a while for a player to get into the story and get things moving, but once you get there it is quite enjoyable.

You have ten different playable characters to explore and hundreds of monsters to fight.

Get ready for an adventure!

Our protagonist, Leon, has arrived at the Libra Corridor, a magical labyrinth that has called many adventures to explore it, including Leon’s missing father. Leon is anxious to get started on his own adventures, so he puts together a party to help him. All along the way we learn about the characters and their motivations through engaging scenes.

Graphically, the game is beautiful. The art is clean and bright. Each character has their own look and facial expressions, as you would expect for a visual novel. Lionheart has colorful characters and nice backgrounds. Visually, this game is easy on the eyes.

Notably, Lionheart has the original Japanese voice acting and I enjoyed the voice actors they chose. Pleasant to listen to, the voices matched the character designs very well. I found the music to be a bit repetitive, but it is pretty. Also, I did end up lowering the game volume during battle because the characters say the same things over and over when they attack. Unfortunately, it became too much for me. However, this may not bother you as much, it was honestly a matter of personal preference.

This adventure is easy on the eyes and hands.

Players will find this to be a fairly easy game to pick up and play. Thankfully, you will not require a controller and since you aren’t actively moving the characters around Lionheart doesn’t require a lot of dexterity to play and enjoy. The interface lets you control how fast or slow you want the text to scroll, as well as including other options to enhance your experience. You can also use the adjustable difficulty if you want a challenge. I went with the normal difficulty and it provided me enough of challenge as an average level player.

Like most RPGs, Lionheart has hours of game time to enjoy. Currently, I have played 8 hours and have barely scratched the surface in terms of story. You will find plenty to explore and enjoy with this title.

Lionheart is developed by Shiisanmei and has been presented to you with English subtitles by Fruitbat Factory.  July 31st is the date set for on Steam. Upon release, it will be priced at $19.99, which is the standard for an RPG of this style. This game has achievements and Steam Cards for all of you collectors out there. I highly recommend looking at this title if you enjoy a good RPG