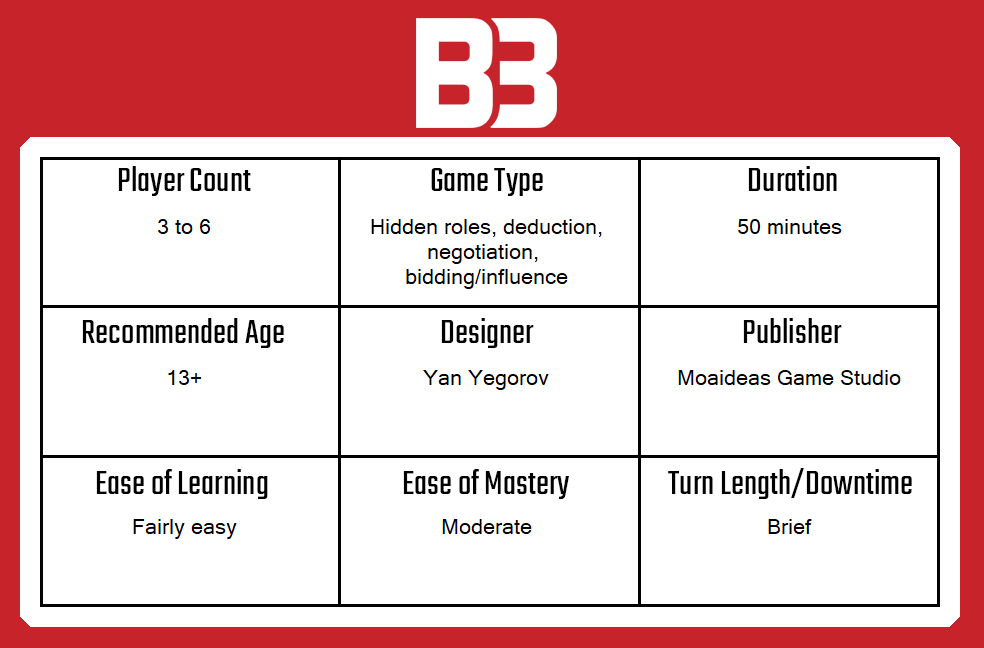 Although there are many available, we’ve covered relatively few social-deduction games here on Big Boss Battle, which is a situation that makes Liberatores: The Conspiracy to Liberate Rome all the more intriguing to me. In Liberatores, three to six players are each assigned a hidden role — that of The Agent, The Competitor or one or more Liberatores. Everyone except The Agent seeks to kill Caesar, whilst The Agent wants to ensure he keeps on breathing.

Broadly speaking, Liberatores is like a number of other social-deduction games in that it does centre around working out which player is occupying which of the hidden roles. However, unlike in a lot of similar games, doing so does not end the game. Instead, Liberatores borrows liberally from heavier board games to introduce an influence track for Caesar and a number of other persistent features that result in more complex rules than you might usually find in this kind of game.

Cards drive most of the action, with players dedicating the support of various members of Roman society to either Caesar or to The Republic. Whilst it might not seem wise for The Competitor(s — there are two in a six-player game) or the Liberatores (who are hidden from one another) to dedicate support to Caesar, doing so is the only way to gain money in the game. Likewise, whilst it might seem as though The Agent can simply support Ceasar each turn, since they act alone, they’ll soon become outnumbered if their role becomes obvious.

At the end of the game, the most famous players in Caesar’s historic demise enter the fray and declare their allegiance before players reveal their identities and determine the winner. If Caesar lives, the only winner is The Agent. If he dies, the Competitor with the highest personal influence (as long as it is higher than any Liberatore) wins. If he dies and a Liberatore has the most personal influence, the Liberatores win as a team. Depending on the number of players, Liberatores plays in around an hour, albeit the first game will take perhaps half an hour longer. Liberatores features very nice components for what you might think would be a budget or basic game, given that it is from a relatively modest publisher and social deduction games are generally card games. Liberatores is neither modest nor as simplistic as some of its rivals. In fact, it features superb, slick components that are really impressive. The main board is large and well made, with fantastic artwork and clear numbering and placement information that makes setup intuitive after the first few plays.

The cards that make up the people of Rome each feature striking artwork that is eye-catching and distinctive. There’s a cartoon style to the artwork, but it’s also presented in a manner that features a lot of popular Roman iconography and visual style — a style you’ll recognise from childhood and will find easy to engage with from the outset. Large and small cards are used intelligently to show the difference between citizens and servants, which minimises the need to sort cards between games significantly. Preferences for Rome or The Republic are also clearly indicated via the colour scheme, which helps with decision-making at a glance.

The manual is reasonably clear, although I guess it could explain a few things marginally better. That said, Liberatores is quite complex for the kind of game it is, which makes me think that perhaps I should have simply gone into it with more realistic expectations. Overall, Liberatores features a fairly small box that is chock full of good things — it balances classy production and a classical theme with fun gameplay and playful looks, which is a nice combination. There’s a fair bit to take in on each turn of Liberatores, but it can be broken down fairly simply for the purpose of teaching. As long as everyone understands their objective, the main focus is to balance Caesar’s influence in their favour before the citizen deck runs out. To do this, players have three actions to choose from.

The first action is to bribe a citizen to join the Liberatores, in which case that citizen moves to the left side of the track, the influence track swings the matching amount towards the Liberatore side and the player must pay a number of coins as shown on the bribed citizen. The second available action is to hire the citizen onto their own (or someone else’s) player board, enabling certain special actions to be made available. The final action is to dedicate a citizen to Caesar, which swings influence in his favour, but also lets that player take some cash as well.

After this main action is done, the player may then take a secondary action to hire a courier or informant, which can again be added to their own or another player’s board. These may confer positive or negative end-game influence, depending on which side you are on (and who you give the servant to). There are some clean-up elements — refreshing the available citizens ,for example, then how to set things up once the deck is reduced and Mark Anthony and his pals decide to get involved. What might appear to be a straightforward and lightweight affair often becomes quite tense and exciting when Liberatores hits the table. This is especially true at five or six players and, in particular, at five, since I prefer the game with just one Competitor rather than two. Even though I prefer it with higher numbers of players, Liberatores is reasonably playable at three, which is pretty unusual for a social game like this.

Liberatores features a considerable amount of both on- and off-board play, with a clear victory condition for all players that is actually very balanced, despite the fact that it might seem otherwise due to the number of Liberatore players. The reality is, Caesar begins the game with power and remains powerful throughout, since everyone needs to appease him to gain cash. It’s very challenging to tell a Liberatore from the Agent, let alone from a Competitor, so bickering and accusations are commonplace within the first few rounds. This, really, is how the Agent sneaks their wins; it’s exhilarating stuff. Without doubt, Liberatores hits the spot for me. More often than not, I find social deduction games pretty boring after a just a few rounds of doing the same thing. Liberatores removes this problem by adding a lot more structure to the gameplay than most similar games and ensuring that even if you do only play it once, it’s likely to be memorable enough that when you next come to play it, you’re ready to do so again. It might not be a game you want to play back-to-back (although don’t rule it out), but I think that’s part of the appeal for me.

Thanks to how good it looks and how easy it is to play once you’ve learned the finer details, Liberatores is a fine additional to any shelf. Whilst I remain unconvinced by social-deduction games in general,  Liberatores is probably the exception to the rule that will mean I keep trying them. It’s almost certainly going to be the only game of its kind that remains on my list of long-term prospects to play over and over again.

A copy of Liberatores was provided for review purposes. You can find out more about it on the website of publisher Moaideas.