Kramer and Kiesling’s Renature is an abstract, ecological delight

Renature (pronounced Re-nature, not Ren-a-ture as I keep calling it) is a brand new IP co-published internationally by PSC Games, Pegasus Spiele, Capstone Games and Deep Print Games, among others. With such an illustrious group of backers and a pair of designers like Michael Kiesling and Wolfgang Kramer, you’d expect Renature to be something quite special — and guess what? It certainly is.

Renature is a deceptively simple game that uses dominoes — each of which shows one of ten animals on either end — and plants of different sizes to create a multi-faceted, abstract take on area control. The theme has the players placing these dominoes onto the board and then filling in clearings with grass, bushes and then trees of different sizes.

Whilst this theme is relatively thin in practice, I can’t tell you how delighted I am to see a game that has me matching frogs or badgers to plant trees, rather than one that has me matching infantry or artillery in order to apply military pressure, or something equally confrontational. This theme, however it might relate to the gameplay, is brought to live beautifully through the artwork on each domino, as well as on the board itself, and playing Renature always begins as a relaxed, pleasant experience. 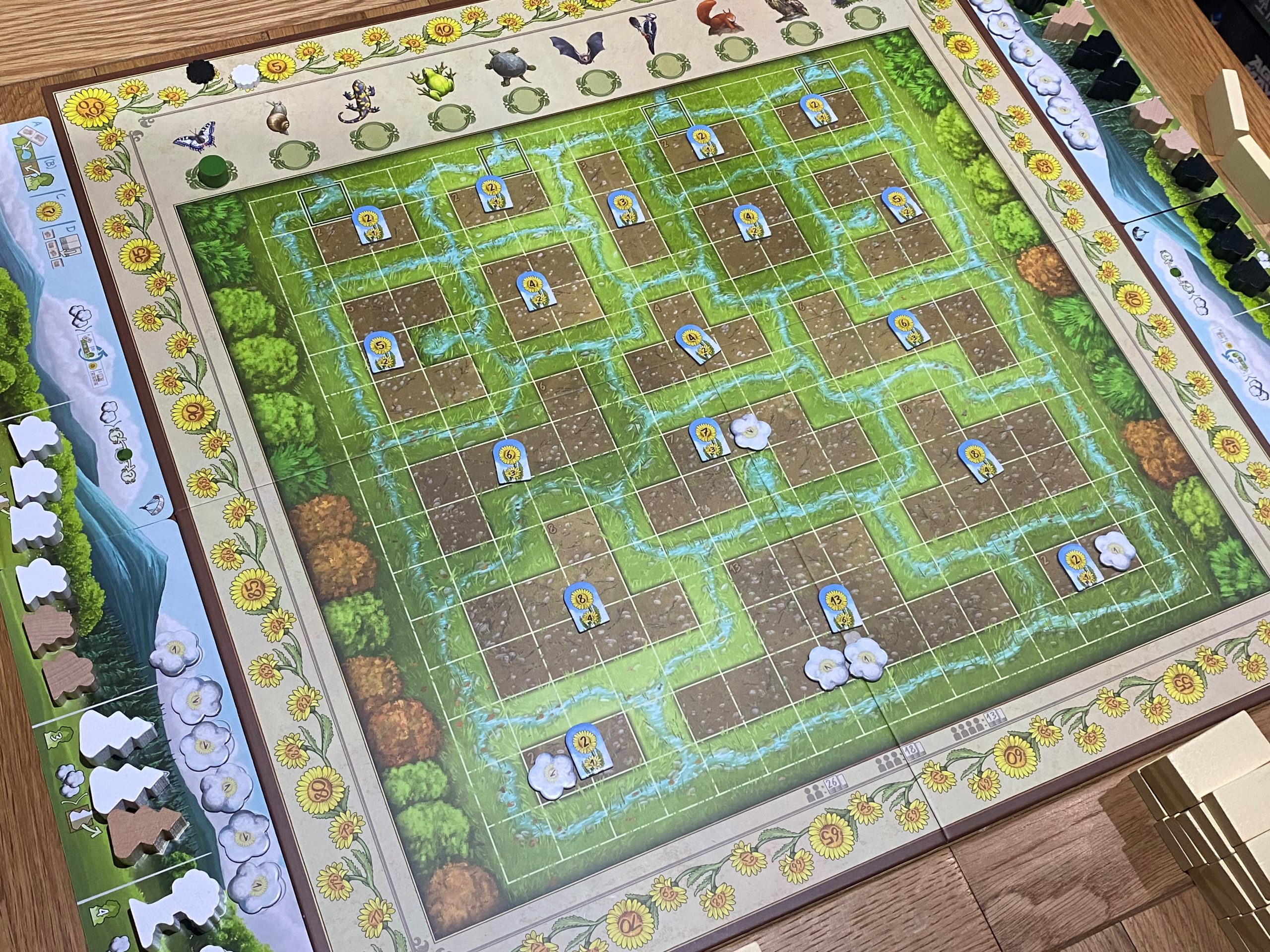 I say it begins relaxed, because what you’ll quickly learn as you play Renature is that the gameplay is anything but. Turns are simple, with only four things to do — place a domino, place a plant, score plants (if applicable), draw a new domino. The only variation on this is that if a player does not want to place a domino, or can’t then they can discard one and effectively pass.

The brain-melting challenge in any game of Renature comes not from the inherent complexity (or lack of) in how the game works, but from the decisions you’ll make turn to turn. Placing a domino is frequently easy — there are four starting spaces to place them onto, and from thereon, a player can place a domino anywhere either onto one of these remaining starting spaces, or in such a way that the printed animal matches each animal printed on an orthogonally adjacent animal.

There are a few nuances here that make placement more interesting, for example of the ten animals in the game, each one appears once in combination with each other animal, and in any game a small number of dominoes will be secretly left in the bag. In addition, each player has a hand of just three dominoes to choose from and cannot see the rest of the dominoes assigned to them. 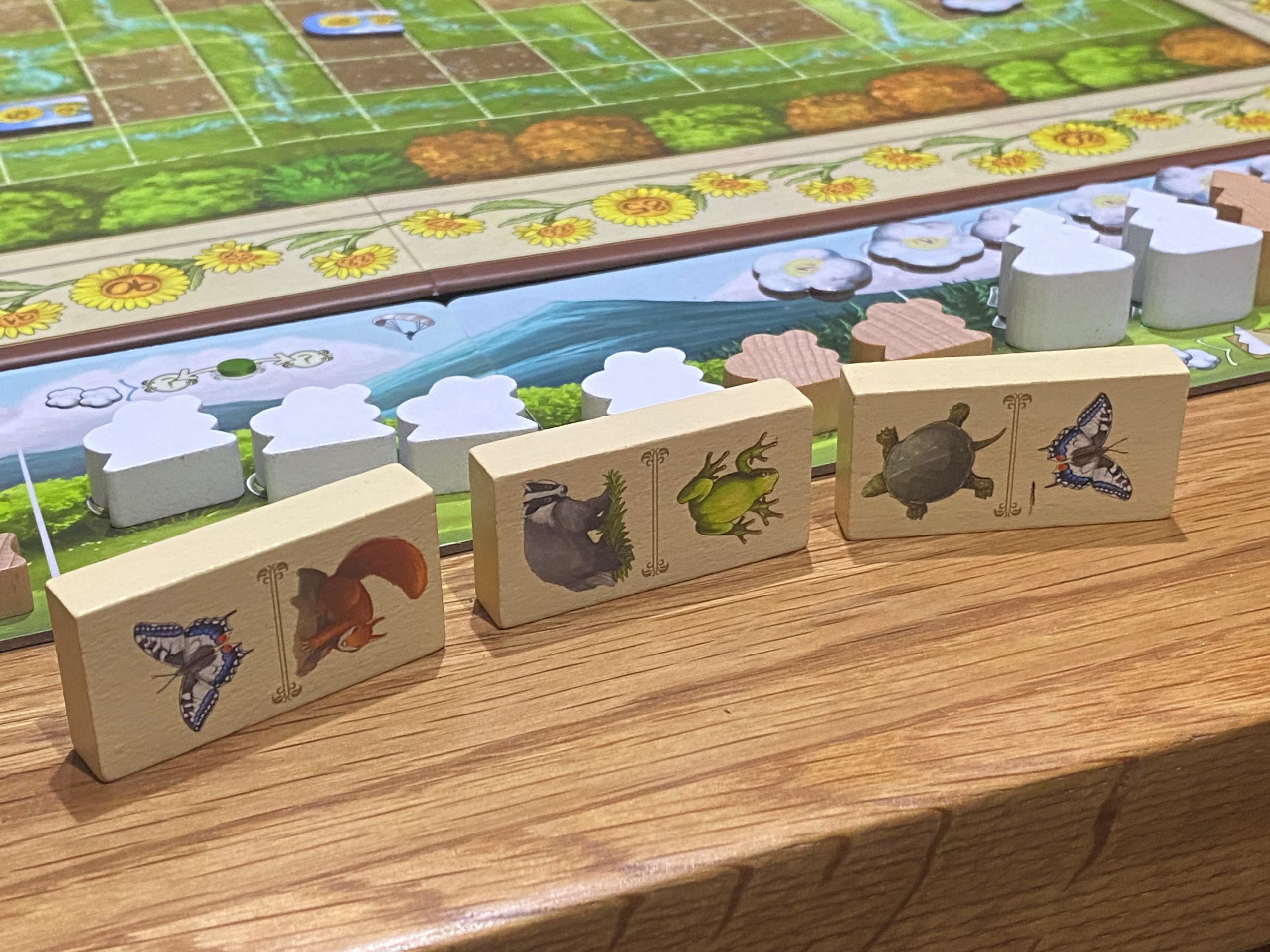 In addition, one animal is always considered to be wild at any given time, enabling it to be placed against any other animal — or for any animal to be placed against it. One interesting feature of Renature is that the wild animal will never change unless a player uses one of their Cloud Actions to change it. Doing so costs two clouds, each of which is worth a point at the end of the game. Another small decision within the existing process of placing a domino relates to whether spending a point to change the wild and place your domino is actually worth more than just keeping your two clouds (worth two points).

To really understand why any of this matters, I’ll need to briefly explain how scoring works in Renature. In summary, when you place a domino, you are then able to place a plant beside each. Each player has their own board covered with grass, shrub, pine and oak tree pieces, most of which are in their own colour and some of which are in a neutral colour.

When a player places their domino and puts a plant into an adjacent space (within a clearing) then they score it immediately — the placement value of a plant is always one plus one for each other plant in the clearing of an equal or lesser size. So if you place an oak (the largest tree) in a clearing with grass, a shrub and a pine, it will score four (its own value plus one each for the smaller plants). It’s important to note that it doesn’t matter who the other plants belong to, or even that you place a plant of your own colour — a neutral placement will also score here. 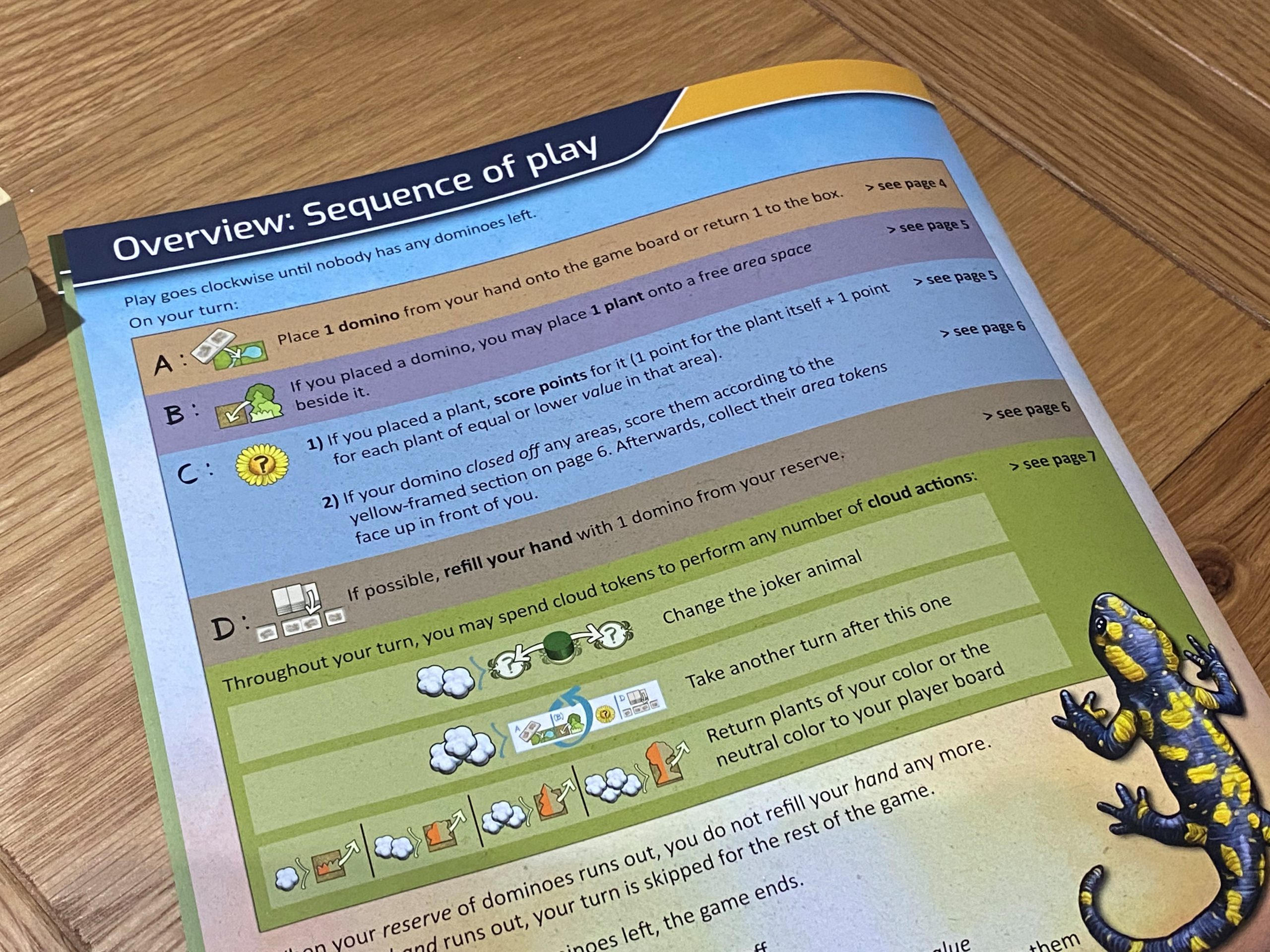 The genuinely interesting bit comes if placing your domino has closed off all the sides of clearing (or left one space open that can’t be filled, thus effectively doing the same.) At this point, your normal plant placement happens, but you must then score the clearing. This is done by comparing the total value of all colours in the clearing based on the size of the plants placed there.

When this happens, any colours that are tied for value will be ruled out. So for example, if you have an oak tree (value four) and an opponent has two shrubs (value two) then both you and that opponent will be ruled out. In this example, if there was another player with a value one grass piece and perhaps the neutral player with a value two shrub, then the neutral player (nobody) would win, the other player would be in second place and the two tied players would be nowhere.

To continue this example, the neutral player would therefore score the Major victory point total shown on the area token that was randomly placed during setup, whilst the other player will score the minor victory point total. Whichever player actually surrounded the clearing and triggered the scoring will then take the victory point marker, which will have secret endgame score printed on the back. 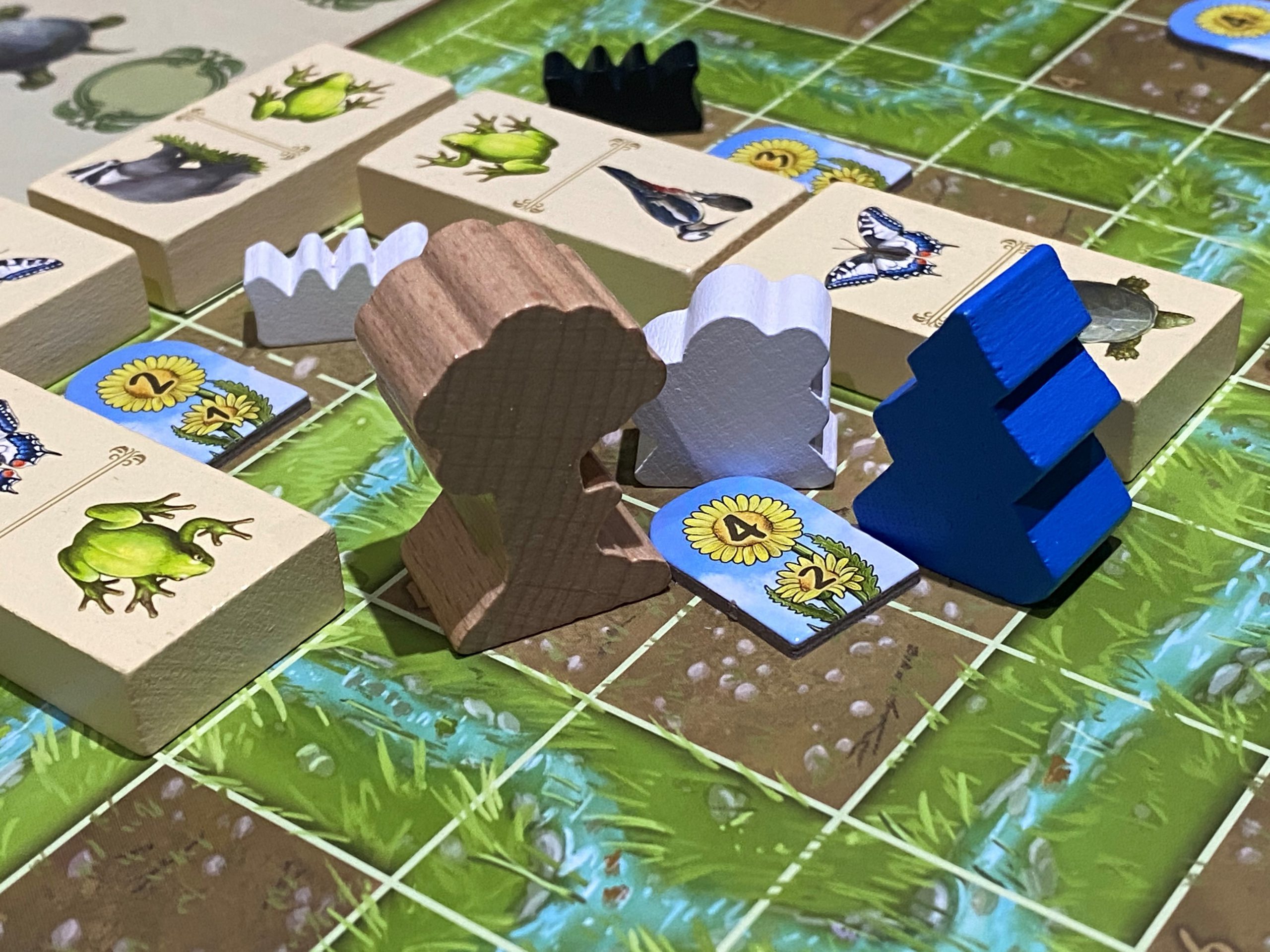 Now if that sounds a bit complex and like a lot to think about, then yeah, that’s exactly my point. Placing dominoes is really easy, except perhaps on the rare occasions when the board is full or you have a poor hand and need to weigh up your options. Actually determining if placing a domino in a specific place and then what plant to place beside it is really, really tricky.

To take us back to the start of this review, I mentioned that at the beginning of Renature you might feel quite relaxed, but not for long. Aside from the inherent complexity of the decisions you’ll be making, the other factor is that spoiling the plans of others is absolutely critical to your success, and some people just don’t like doing that.

Think about the example I just gave. Planting an oak tree is a big deal. Each player only has a couple of them in their own colour and although you can reclaim them (again with a Cloud Action) it is costly to do so. When someone does plant an oak, it means they really want to win an area. As I’ve just described, if you can place a domino that causes them to be tied with another player (including the neutral one) then you can force them to score nothing when that clearing is resolved. 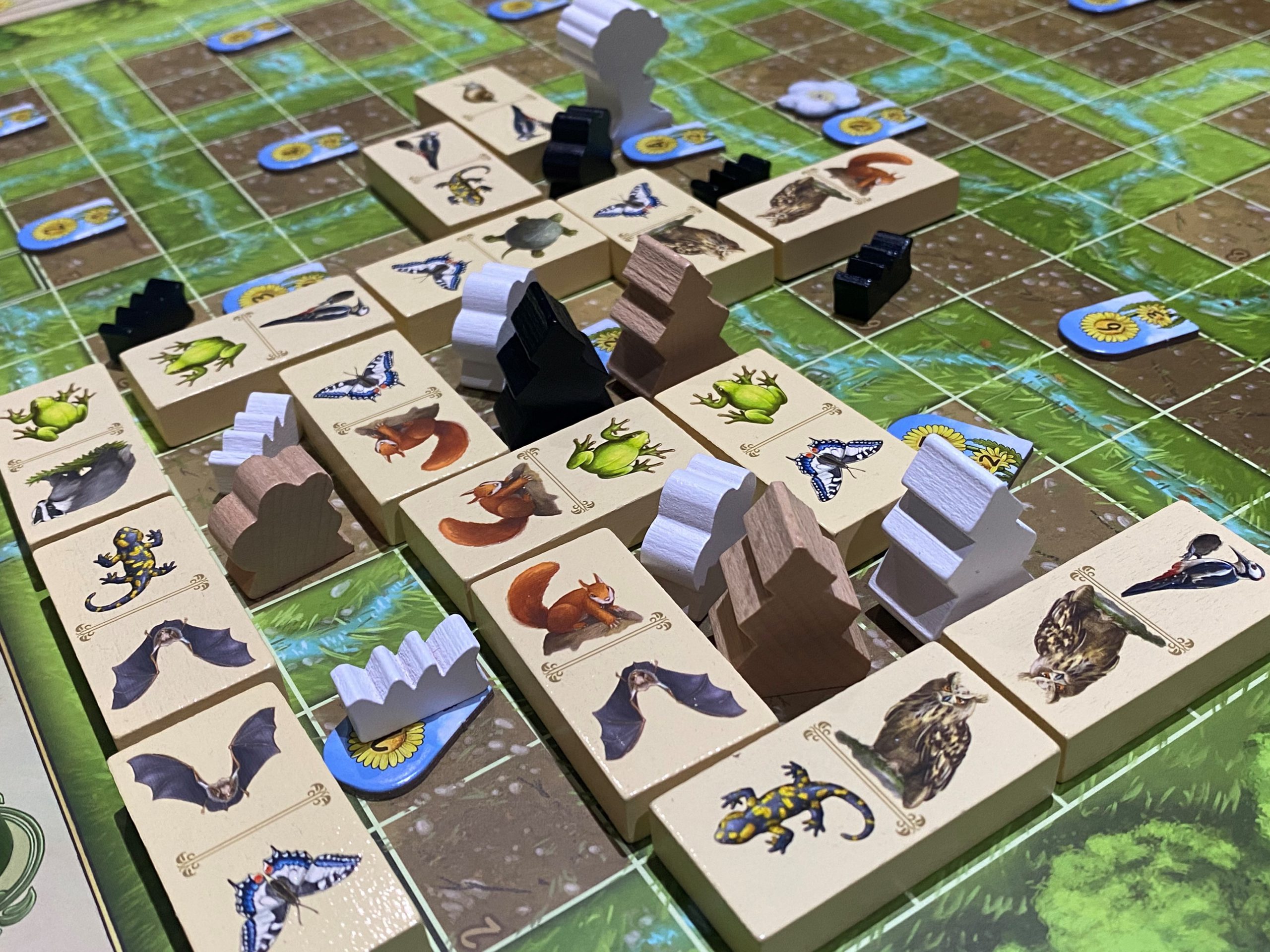 Countering this point is how clever Renature makes a player feel when they score a high number of victory points having only invested one of their own grass or maybe a shrub piece into an area – when one or more other players have invested a lot more. Clearly though, because each turn is just place one domino, place one plant, for every area you “win” like this, chances are your opponent(s) will be winning elsewhere.

Now, for full disclosure, I’ve only actually been able to play Renature properly with two players, since the British lockdown has meant that we can’t leave the house for social visits such as board gaming, and Renature is far too complex for the younger players in my house. The game caters well for two players, with a specific (and very different) setup for two players than at three or four and, I perceive, a different kind of experience.

The one thing I will say about Renature is that I can imagine how in a three or four player game, the board state could change so much from one player turn to the next that making the kind of medium term plans that Renature demands might be quite difficult. That said, it could just as easily mean that more opportunities are opened up due to the number of clearings that the additional dominoes would reach in a shorter time. 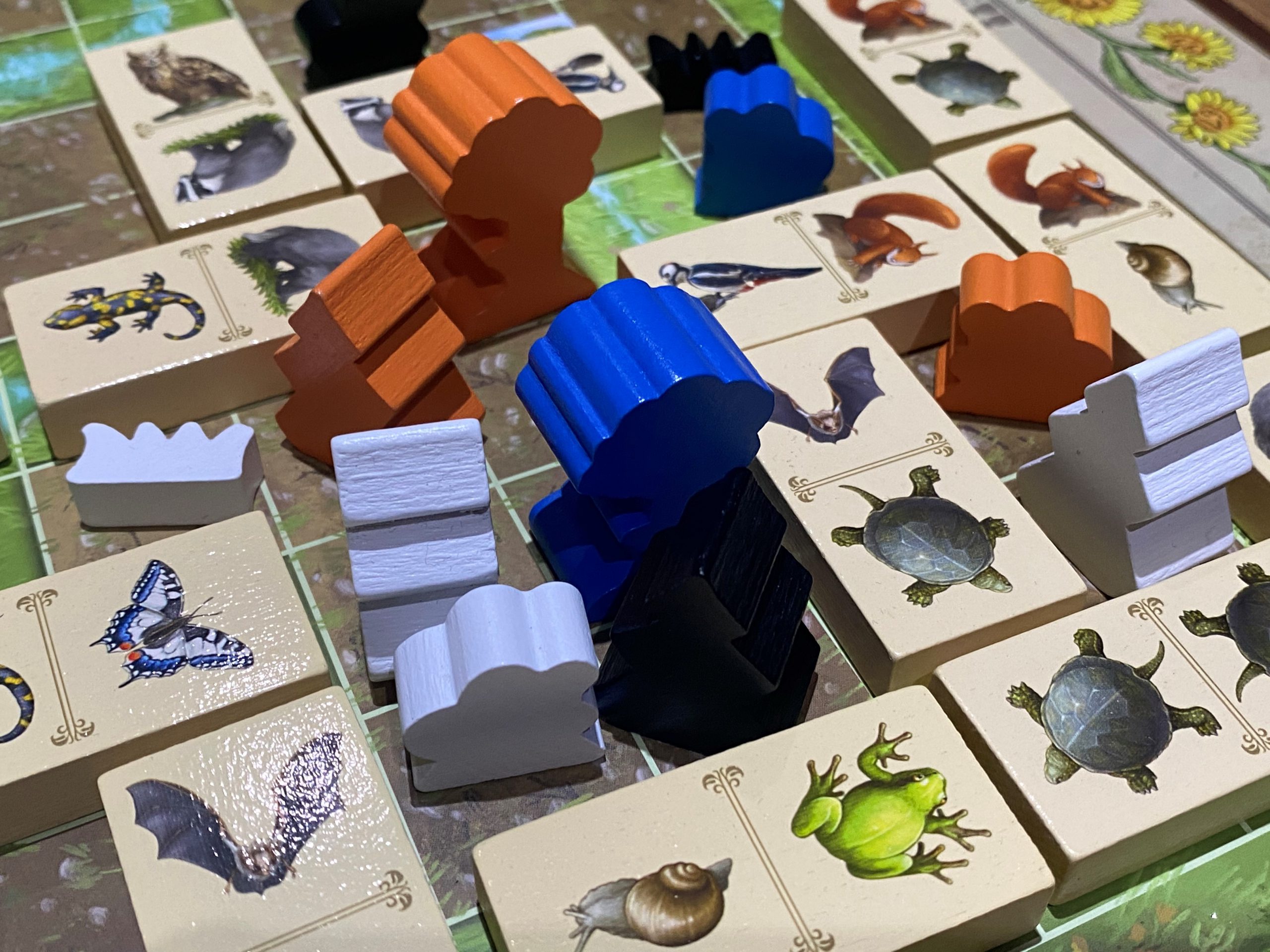 Either way, there’s no doubt that the core gameplay in Renature is rock solid, and the theme and visual aspect of it takes a good game and makes it feel like a gorgeous, opulent occasion when laid out on the table. We’re talking about big, solid dominoes with gorgeous artwork on top of a thick, attractive board. It’s clean, attractive and inviting.

Overall, Renature is a game that I already love with two players. Even though I have small reservations about the three and four player game, I would not be at all surprised to find a different but equally fantastic experience is to be had with more players. This is definitely a game that any hobbyist should consider adding to their collection, such is the quality of the design and the finished product.

You can find Renature on Amazon.