As gaming evolves; both competitively and for pure enjoyment; so does our means of consuming the medium. Starting at mono, moving into the stereo and now into the heavy (and technically impressive) heights of spatial and surround; gamers are expecting amazing sound engineering to create immersive environments and give them a technical edge against other players. But what use is the implementation without the appropriate tools to realise it at home in front of your gaming device of choice. JBL have sent us over the latest in their range of wireless headsets to find out Enter the JBL Quantum 610 Wireless.

Sound is Survival is plastered clearly in large, primal, aggressive lettering on the colourful packaging which shelters the headphones and draws the eyes as they are unwrapped from their transit materials and it couldn’t be more suitable to describe the situation. Whether it’s a careful ear trying to locate the footsteps of unwitting prey as you chase a higher kill/death ratio (K:D) in games like Apex Legends or Call of Duty: Warzone, or the intense, epic battles brought forth by a philharmonic orchestra blasting out gothic choir symphonies in Elden Ring; intelligent sound design and ultimately adapting to it makes the difference between a podium place and simply being another loser. 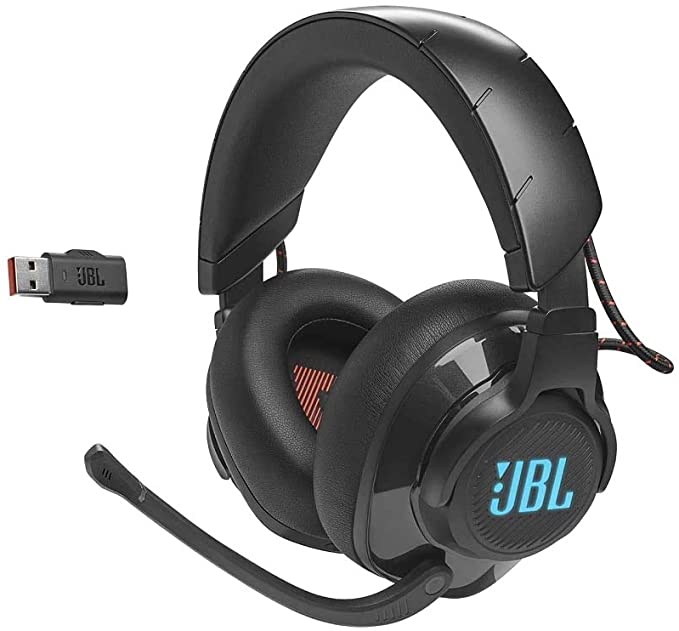 For those of you unaware of JBL, it’s an American company that manufactures audio hardware, including loudspeakers and headphones which primarily serves the consumer home and professional market. Owned by Harman, (of Harman Kardon fame) JBL is also closely associated with legends of audio — Altec Lansing. Given the heritage, there’s some experience here to consider.

The JBL Quantum 610 Wireless Headset is an over the ear set of headphones with a built-in microphone purporting easy setup, hours of comfort, extended battery life between charges and surround sound but it’s swimming in a sea of sharks. There’s strong competition at the proposed price point by players like Turtle Beach, Razer, Steel Series and even Sony & Microsoft’s own entries. So we’ve put it through its paces to see if the JBL Quantum 610 Wireless earns its place and a share of your hard-earned cash.

Unboxing the headset is often a highly regarded, almost ASMR like experience for most gamers and JBL have done a great job here. The box is compact but weighty with a number of tightly folded sections separating the variety of accessories bundled with it. Sliding out from the colourful exterior packaging is an inner container housing the goodies. Coming readily covered with a soft case; the headset is protected from any scuffs or movement in transit. Under a secondary folded section opens up a small compartment holding the 3.5mm audio cable, a USB charger cable and finally the wireless dongle.

With all the complexity under the hood, it’s great to know that JBL has considered the eager gamer and the ability to get going immediately. Plugging the USB dongle into the front of the PS5, the headset is immediately picked up and registers a connection. Dropping into the setting it is easy to fiddle with a few elements but what you see is what you get so you’re going to be relying heavily on JBL’s inner tuning of the Quantum 610.

The JBL Quantum 610 Wireless looks the part, the large cans are supported by the sturdy head strap and the earpieces are covered with some quality material that isn’t overly heavy. Long term testing is showing the weight as quite acceptable for lengthy sessions but for younger or smaller owners this could cause some neck fatigue as whilst they aren’t as hefty as other wireless models, younger players can’t shoulder the extra weight afforded by wireless cans. With over one hundred hours clocked in Elden Ring alone, overburdening has never been a concern, and neither has battery life.

The box states around forty hours of usage and it’s not far off with a mean time between charges in actual usage at around 36 hours (with the LEDs off). It’s almost a complete package at this point but it feels a little more attention to some of the smaller component parts would be a welcome uplift, the volume wheel, for example, feels a little lightweight with very little resistance and could benefit from a button form rather than the wheel.

Sound quality is good and it’s easy to pick out any number of individual sounds as you prowl dark corridors and abandoned buildings, the range is good if not a little generous on the bass but this is where it excels. Loud explosions, high calibre rounds and large guns sound great with an almost cinematic feel to the audio. Higher pitched sounds;  whilst slightly tinny; still, sound great and clear just not as well presented as the lower end.

Wireless connectivity is flawless and with no loss in sound quality, it’s great to see it as default here. Given connectivity is also instant there are no fussy controls, pairing or other delays in getting straight into your favourite game

The Quantum 610 Wireless sits in the middle of the Quantum series offering a number of variants. The range-topping 800 boasts active noise cancelling for not much more of your reddies so if complete immersion is what you are looking for and maximum concentration, this might be more of your cup of tea. If you don’t need to go that far the JBL Quantum 610 is more than adequate enough for the discerning gamer with a simple setup, massive battery life, hours of comfort and most importantly punchy, clear audio.

The JBL Quantum 610 Wireless is available from Amazon.