While at PocketGamer Connects London back in late January I was lucky enough to judge the PC Indie Pitch, an event in which over a dozen games enter, seeking to win a selection of prizes from the event organisers. I absolutely adore judging these panels as its sometimes the first time some of the games have been shown off — and even if not then it’s always interesting to spot upcoming trends in the industry.

Bad Seed, developers of  puzzle-platformer The Beggar’s Ride, and lively Tower Defence title Sleep Attack, had entered their next big project, Insidia, into the PC Indie Pitch. Insidia, which is currently having it’s free-to-play open beta in Early Access over on Steam, is a simultaneous turn-based RPG which sees two players each leading a gang of post-apocalyptic misfits as they attempt to destroy the other player’s base. 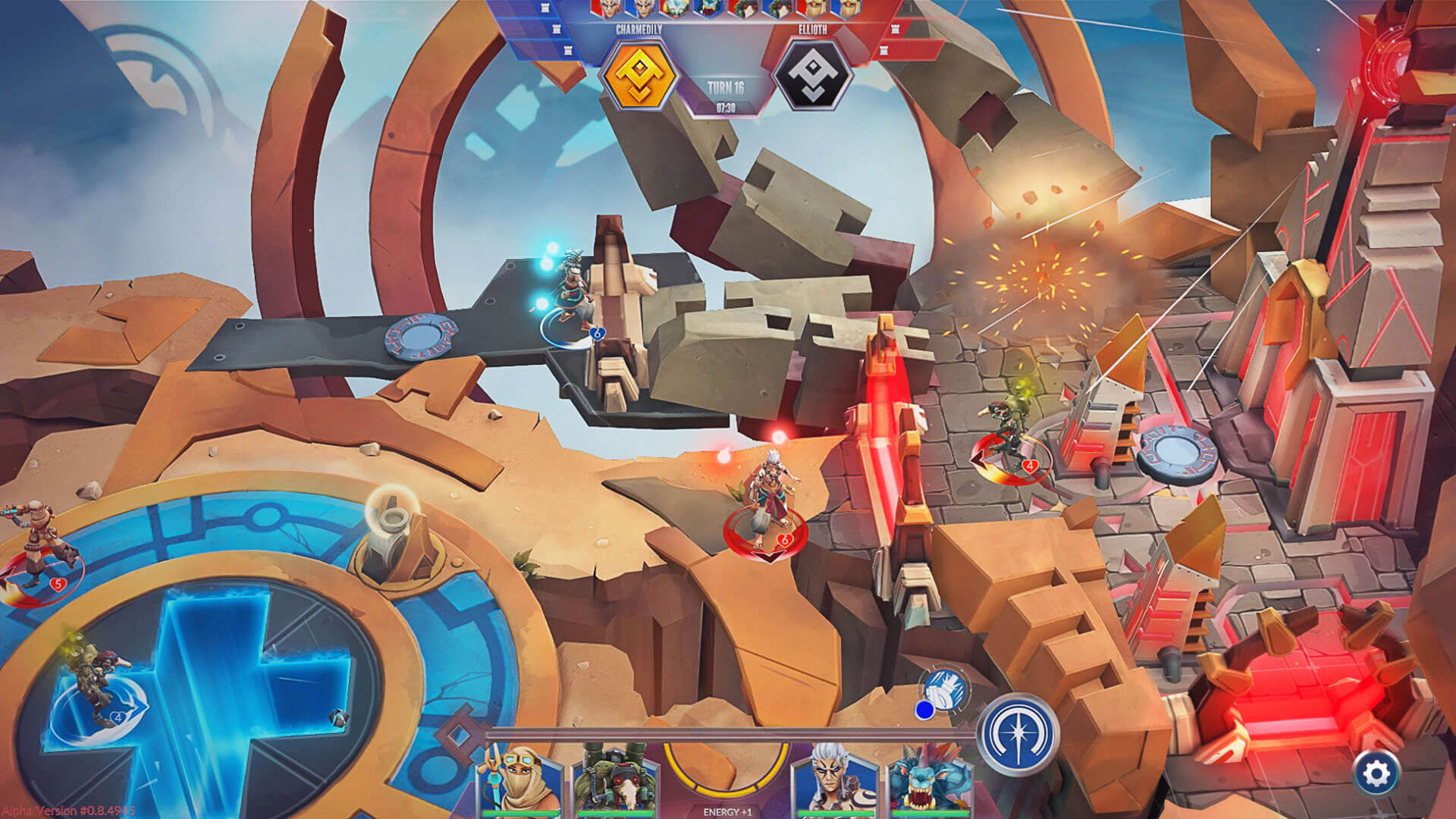 While the game’s bright and colourful artwork is undoubtedly the first thing to jump out at the player, it’s the addition of passive abilities combined with the fact that only one hero unit can be moved each turn, which makes the game most memorable. The mechanics are a gambit of pacing, with time saved by both players planning their single-unit move simultaneously, and the time saved then spent with each passive ability playing out as modifiers.

The six heroes currently in the game follow a lot of the traditional MOBA and hero-shooter tropes, including a sniper who has a long ranged but slow attack, a tank unit with great grapple moves, and a trap/snare character among others. The real difference comes in those passive abilities, the buffs, the knockbacks, the zone control effects which they deploy in those moments between turns.

I have, admittedly, grown quite tired of the hero game character tropes, but these passives moves do add a lot more to the game’s tactical play, and a talented player can easily twist and manipulate their opponent’s team as to secure a quick win. 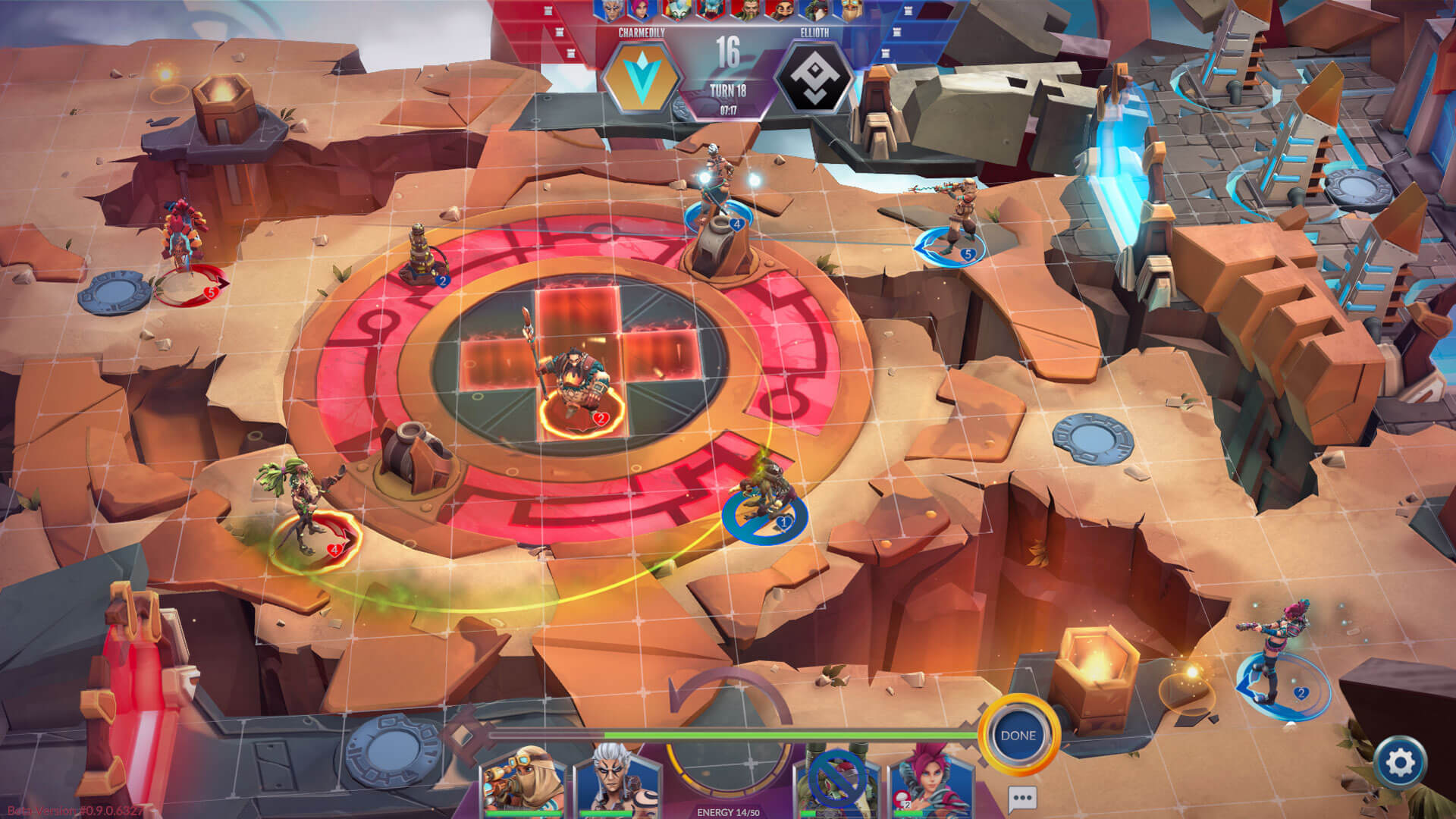 With the single-character simultaneous play there was inevitably going to be two major risks with the game. 1) Rushing: This is addressed by players needing to control a central point in the map in order to have one of the gateways of the enemy base destroyed, and 2) embarrassing moments of similar intent.

Fans of simultaneous turn games, games like Advance Soccer, Atlas Reactor, Flamberge and Frozen Synapse, will understand what I mean by the latter. Those not-so hilarious moments where your unit moves towards where an enemy should, will be, or was, only to find that their plan has completely counteracted yours, and you’re brash rush will only be rewarded with violence. Those moments are key in games of the sort, and breed a different type of tactics, encouraging flanking, traps and pincer attacks. Moving one unit at a time, then, is problematic, and would be game ruining were it not for several game mechanics; the capture zone in the centre of the map directs the combat flow, the passive attacks ensure nobody is ‘unprotected’ even though three don’t move, and characters cannot move on two consecutive turns.

These mechanics all combine to ensure that Insidia‘s matches are fast paced: why crawl when you can surge knowing that at least one of those enemies are rendered static?

Insidia, with it’s turn-based duels is an interesting offering. The team have got a very impressive roadmap listed for the game on their website, including expanded rosters, maps, and customisation options. It’s expected to reach release later this month, and will continue as a live product from there.