There’s always a balance to be struck in civilisation building games. Designers, I am sure, must feel a huge pull to try and cram every aspect of ancient life — from technological development and warfare to farming and animal husbandry — into a few hundred pieces. There are different takes on this, from Through The Ages to Tapestry, but I don’t think any — ever — has balanced setting, game length and mechanical theme as well as Imperium: Legends (and sister title, Imperium: Classics) has.

Imperium, from David Turczi and Nigel Buckle, and published by Osprey Games is a game so clever that it frequently had me sit back and just chuckle because I had played a card, then another card, and then another, in such a way that I just exactly what story the game was trying to tell me. Whether you choose the Minoans and their famous pottery, the Egyptians with their bounteous river, or the ancient Atlanteans; Each of the eight nations in this box has a story to tell. 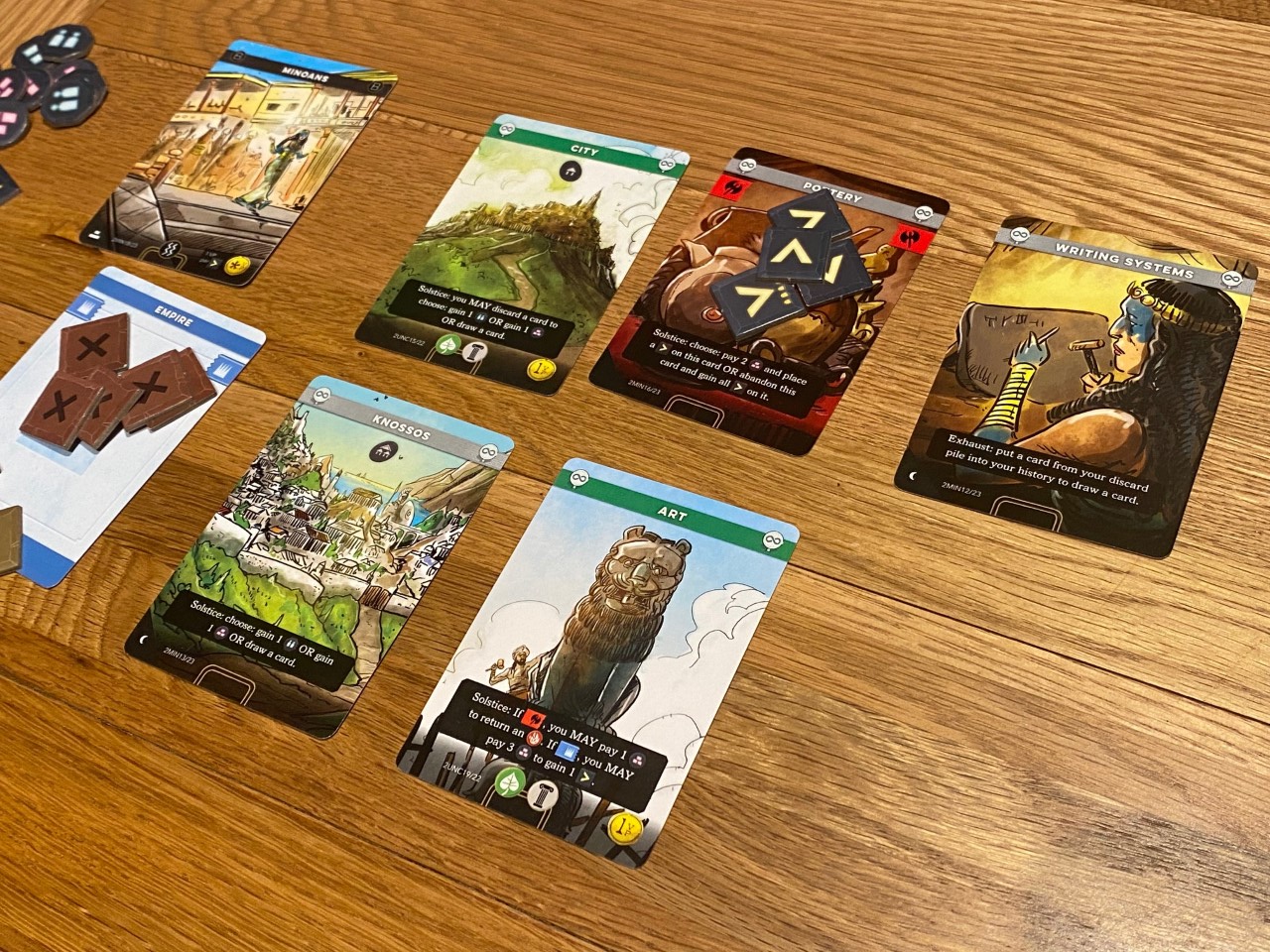 Even more amazing than having eight hugely varied decks of cards in the Legends box, Imperium is so comprehensive that the second box (Classics) contains eight more. I have only played Legends at this point, however based on the published material, Classics features eight nations that are considered more straightforward to play than those in Legends. That’s a good thing, because if there is one downside to Imperium: Legends, it’s that it certainly takes no prisoners. 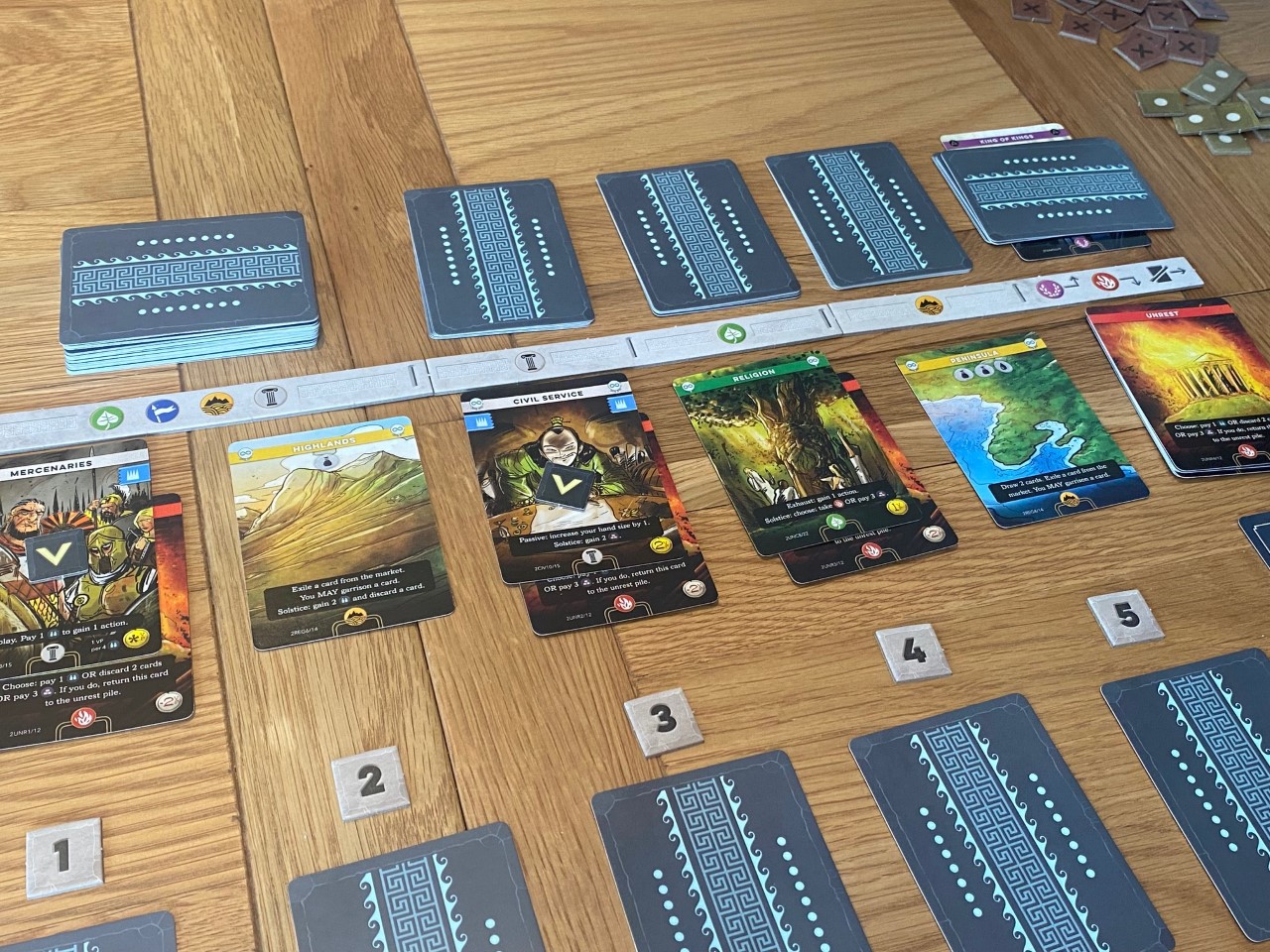 Before I get into too much detail, let me try and explain briefly what Imperium is all about. In short; it’s about guiding your chosen nation, race, civilisation or mythical band of warriors (King Arthur’s Arthurians, for example) to greatness. Greatness, of course, is measured in victory points — which exist in the game as tokens and on cards collected throughout play.

Each race (except the Atlanteans) begins the game as what is mechanically considered a barbarian state. This represents you emerging as something slightly more than a clan, and it allows you to play cards (or take actions) that feature the barbarian symbol. At roughly six tenths of the way through each game, players will usually flip their barbarian state card to its civilised side, denoting that they have become civilised and are walking a different path. This locks off the barbarian actions and opens up new, civilised ones. 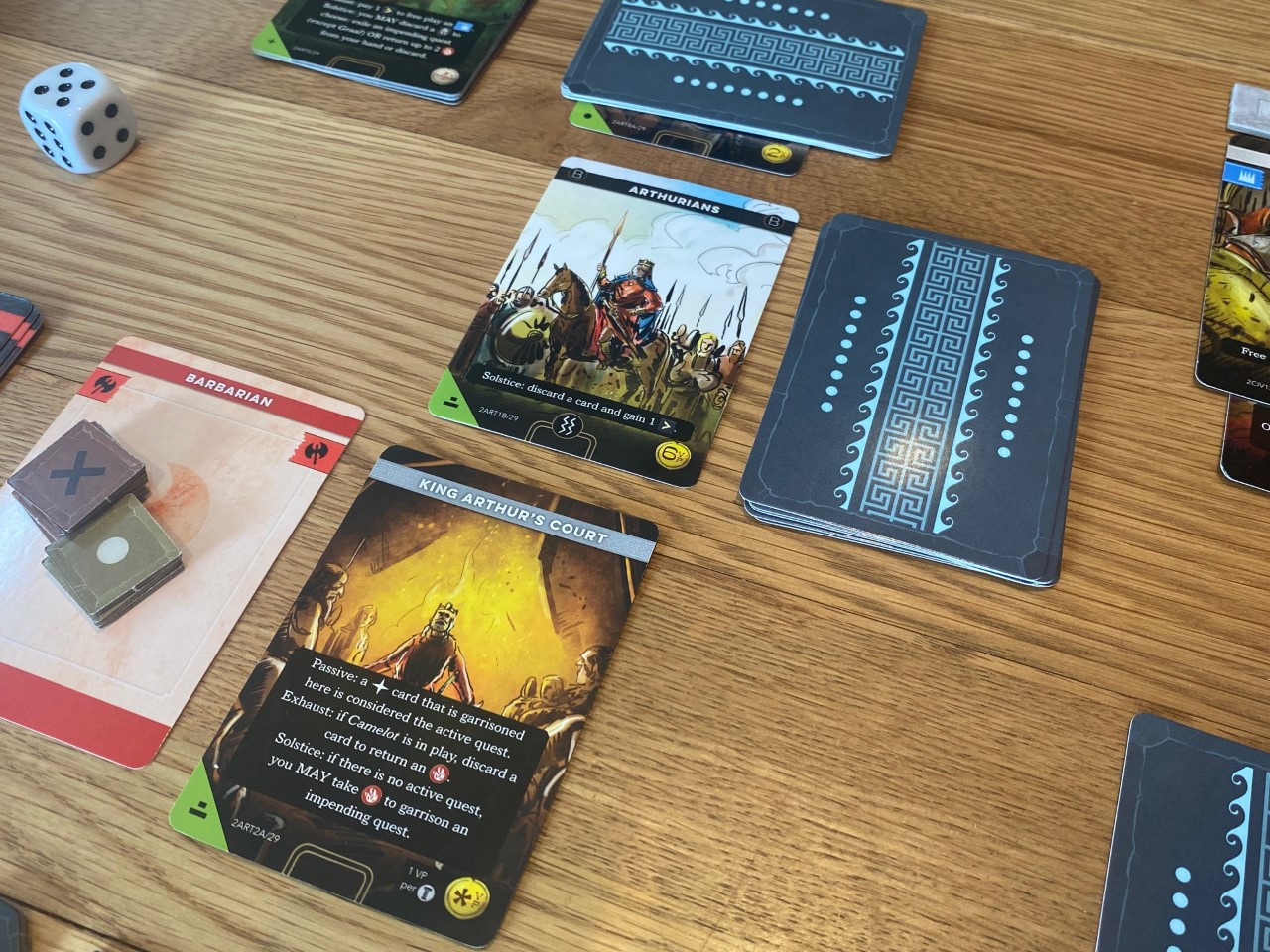 Each player begins the game with a deck of cards that will be cycled numerous times throughout the game, and based on those cards, they’ll produce materials, population and points to invest in cards from a shared library and – once they become civilised – their own unique development deck. The setup for all this — the decks needed for each player plus those for the shared pool — is mind-boggling to begin with, and whilst the manual is good, you’ll still be talking 30 minutes for your first setup.

Like all good things though, Imperium rewards those who stick with it. Even though the act of drawing cards and taking a turn (on which you’ll simply choose one of three actions: Ativate, innovate or revolt) is simple, actually learning the way the game works (and especially how each civilisation works) is not. This is a game that I am sure you could play five or ten times and still not completely get to grips with. 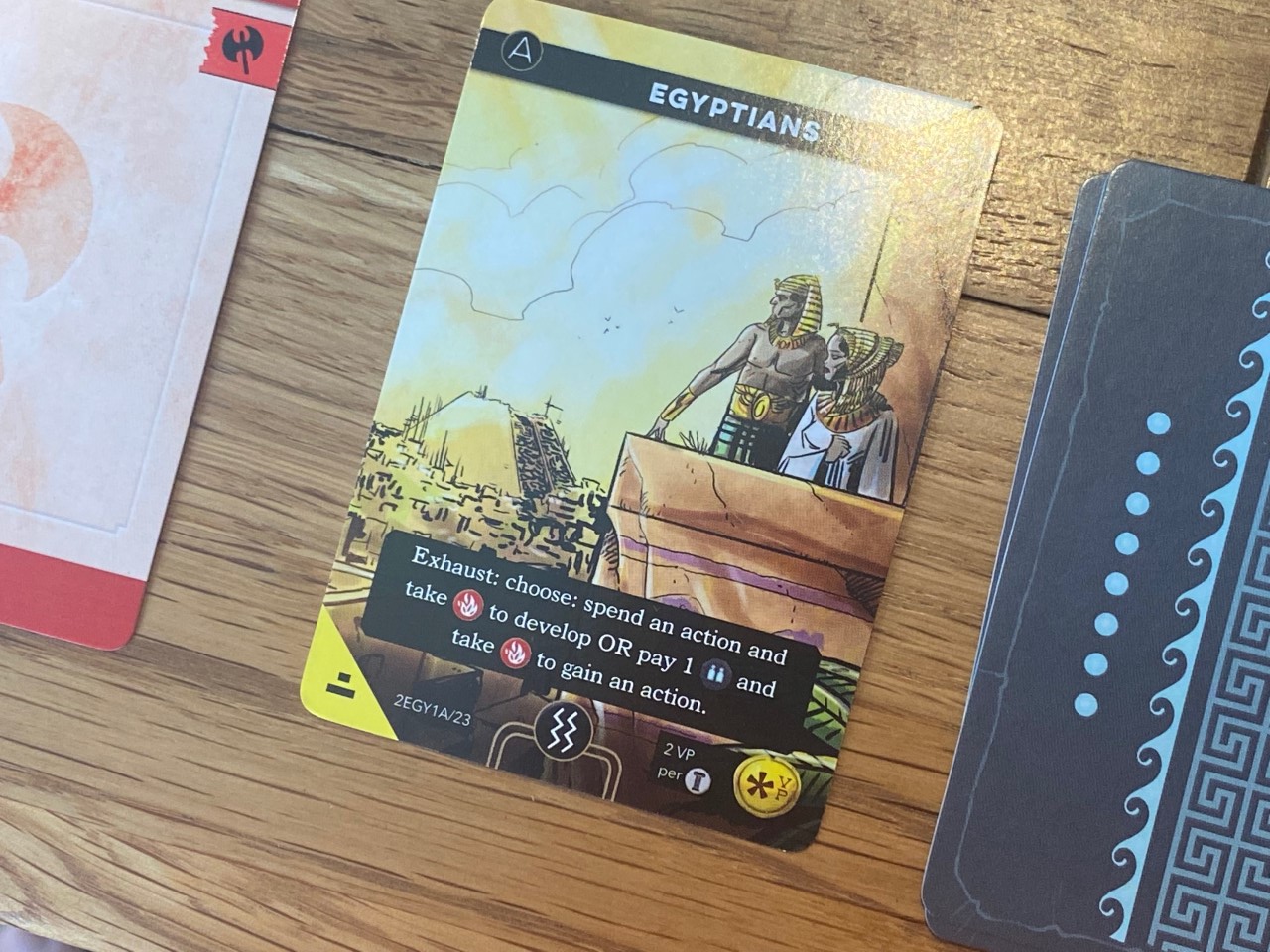 Part of this is down to iconography and keywords, many of which are unique to each civilisation. I won’t go so far as to say that Imperium is asymmetric in the same way as Root or Vast is (in the sense that each player has a completely different set of rules and objectives) but there are certainly material differences between each nation, and how they can modify the basic structure of the game.

Each civilisation also has its own ways of scoring points as well — which the rule book will generally outline — but some are simpler than others. For the Minoans, for example, the Pottery card (which has the barbarian symbol) can generate a ton of victory point tokens, but they must stay on it until you decide to sacrifice pottery and recycle it into your deck. 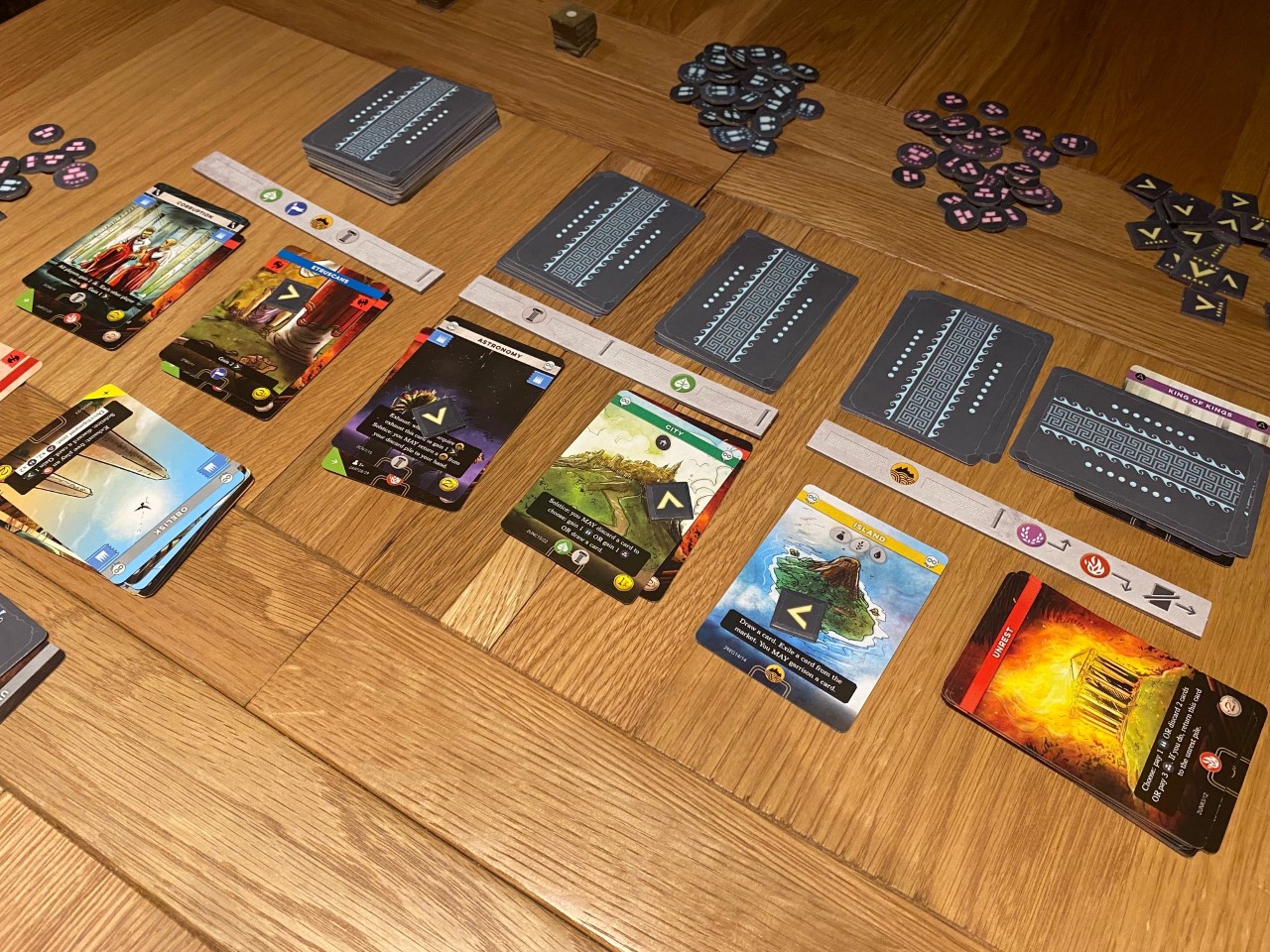 Now, bear in mind that you don’t really have anything to spend victory point tokens on until you become civilised (and can use them on development cards), it can be tempting never to harvest these tokens. The downside is, when you do become civilised, you can no longer replay the pottery card – so it just clogs your hand.

The ultimate play, I guess, is to harvest this card just a few turns before becoming civilised, then replaying pottery and using it again, then harvesting it just before the end of the game. Sounding like something fiddly and hard to time? It is, and that’s a simple example compared to the Arthurian’s quest deck. 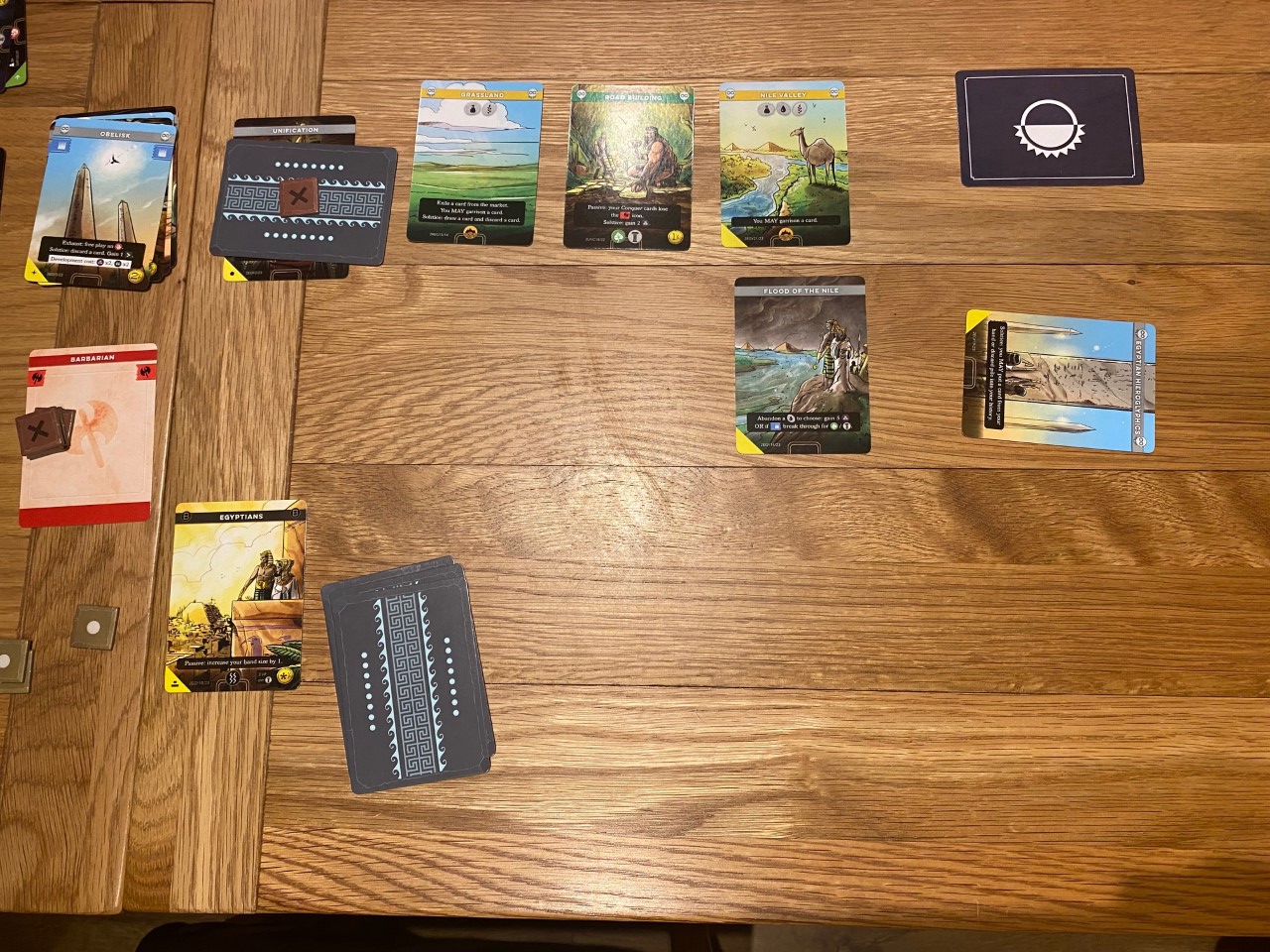 In addition to all these powerful cards that allow you to gather resources, generate points and do other cool things, every deck also includes a number of Unrest cards. These literally do clog up your hand, and what’s worse is that you’ll take more of them every time you force your nation to advance with cards from the market (I say force to advance, because it can happen as a “breakthrough” which does not come with an unrest penalty). Thankfully, if you have a particularly bad hand, then you can effectively spend your turn just discarding them (permanently) by using revolt.

All of this historical intrigue is presented with gorgeous artwork from the Mico — who also did the artwork on Rise to Nobility, Cavern Tavern and Robin Hood. Almost every card is unique, and there’s a real personality from one civilisation or nation to the next. For me this style is reminiscent of Horrible Histories or something like that, and whilst some might think it cartoonish, for me it hits the sweet spot perfectly. 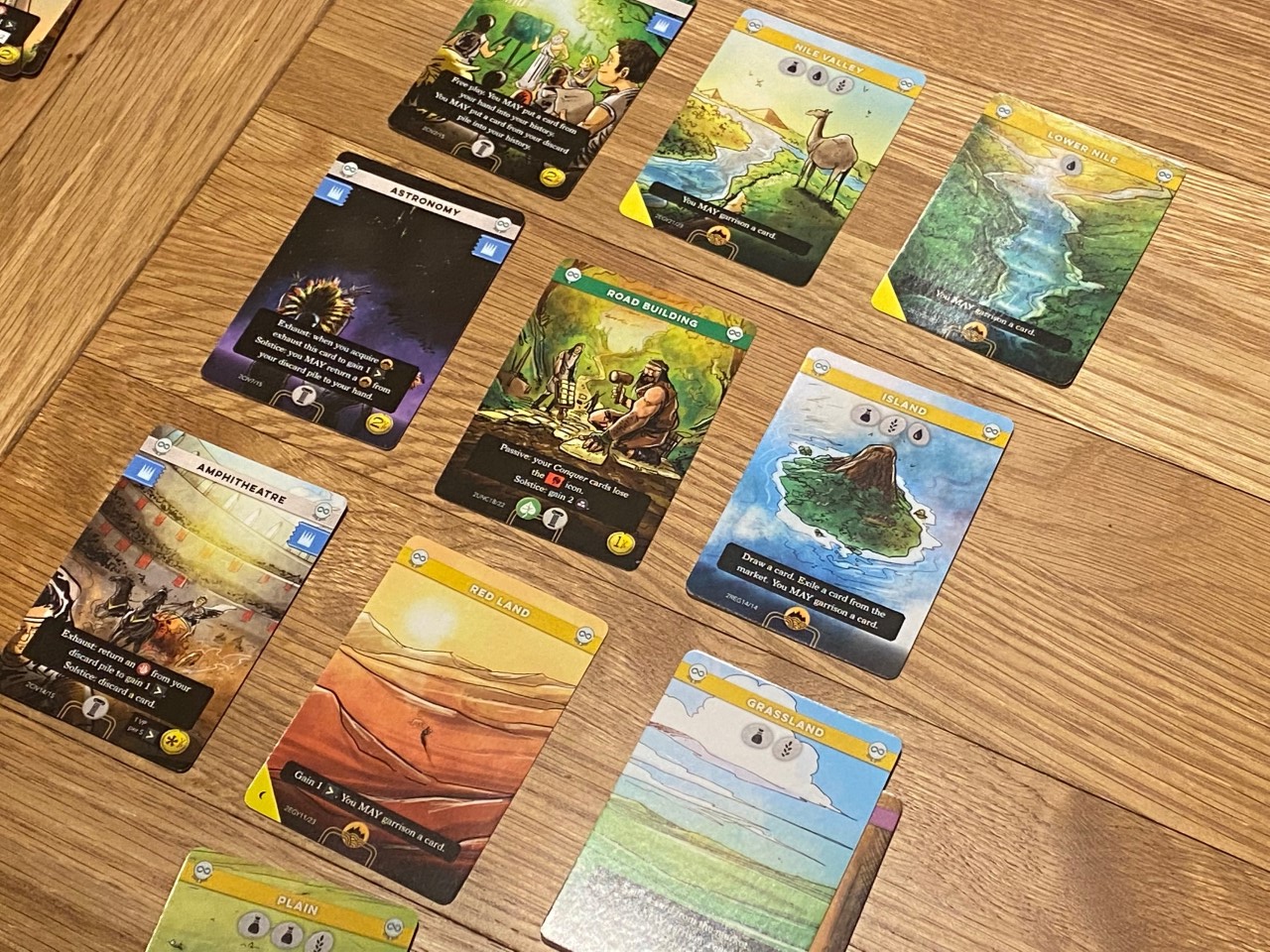 Weighing in at about an hour to ninety minutes solo, or perhaps two hours at two players, Imperium is perhaps the most complete “history simulator” of a comparable weight that I can name. It is nowhere near as down in the detail as Through the Ages, but what it lacks in that regard, it makes up for tenfold by making each civilisation feel completely unique, and by being several hours shorter.

At under thirty quid, Imperium is an absolute bargain, and my only cautionary notes are that I don’t think you’d want to play it at more than two players (although you can) because it already verges on being a multiplayer solitaire affair. Equally, for less experienced players, I am confident that Imperium: Classics would be a more sensible purchase, based on the complexity of the civilisations included.

Imperium Legends and Imperium Classics are available to buy directly from Osprey Games.