South Park: The Fractured but Whole — Hype or Improvement

The good thing about gaming events is the possibility of trying out the games you are eagerly excited to play. South Park: The Fractured but Whole was one such game for me. However, as with most gaming events, you normally have to wait a stupid amount of time for a limited hands-on experience. 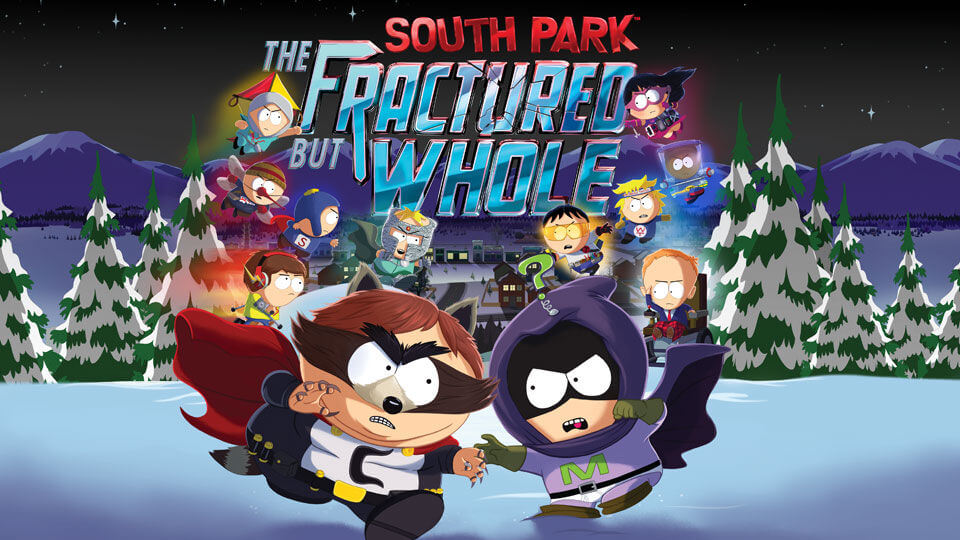 Luckily for me I had a early pass, and was able to jump on the sequel to South Park: The Stick of Truth to see if the hype of the game was real and if it was indeed an improvement on the well liked original. After a short period of thirty minutes — trust me, Assassins Creed was four hours!, so this was short — I jumped into a specific save point demo.

It is in this part of my impression that I must warn you there is adult content. In fact, South Park: The Fractured but Whole is really only for ages 18+ due to the over-the-top adult themes it exploits. And trust me when I say, if you thought the first was extreme, the second take it to another level entirely.

I jumped on and instantly found myself in the men’s bathroom of a strip joint with my sidekick, Captain Diabetes. I was then tasked with tracking down a particular stripper. This amounts to you walking through the club, triggering funny/rude conversation pieces with the clientele. The graphic nature of the game has truly been ramped up and this not going to be for little Jonny and his mates. After failing to find the stripper, we were told that two patrons had her name and we had to extract it from them. 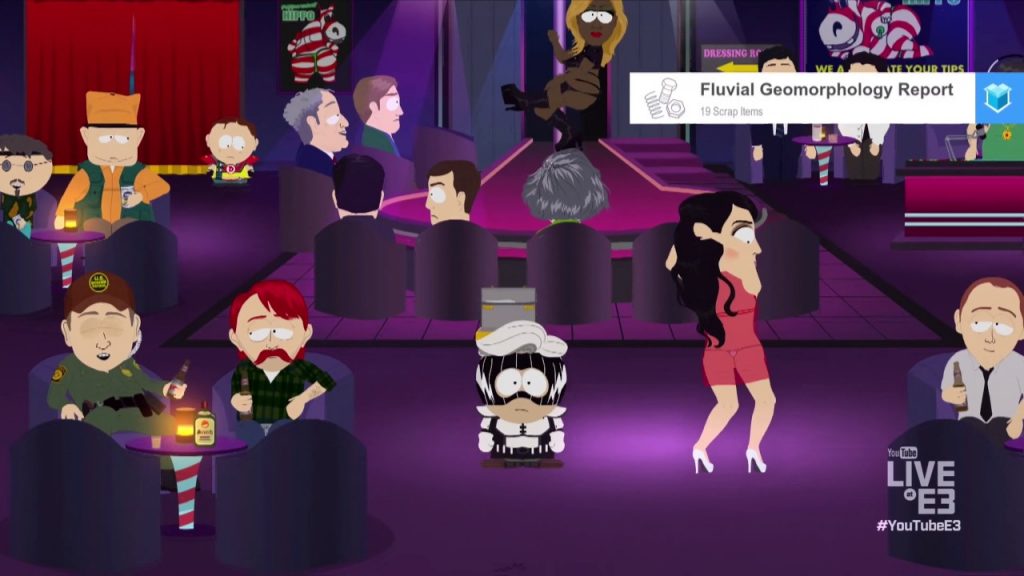 Luckily for me, Captain Diabetes had a cunning plan. Me, the New Kid and my sidekick gave the drunken pair a high disturbing lap-dance. Seeing a nine-year-old grinding to an older gentlemen did make me wonder if they may have gone a little too far. However, we were soon given some funny dialogue before beginning a simplistic mini-game, resulting in you literally farting the punters into submission. This annoyed them, unsurprisingly, and it was Fight Time.

The combat is where Fractured improves over The Stick of Truth. Characters can now position themselves around the battlefield in real-time for tactical advantage. You can use cover, knock enemies into scenery for further damage, or sandwich an opponent between you and a teammate for a double-sided onslaught. 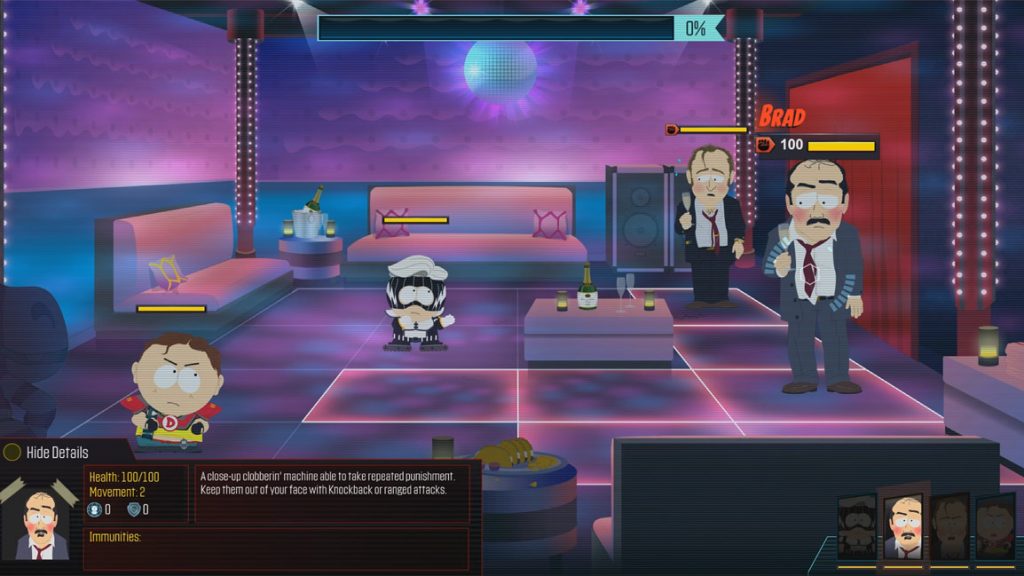 The humour, like in the first, continues during the battle, with situational dialogue and background animations taking place mid-brawl. The dynamism of the battle, along with the combat, gave the battles a more alive feeling, and the use of mobility and its wide variety of attack options was fantastic.

We soon won the battle, then encountered some item-gathering puzzles and even found some Resi-style push/pull furniture shenanigans to deal with. Fractured has indeed ramped up everything that was great about the first in every direction. This is going to be an over-the-top game that will keep adult fans of the series very happy and the gamers alike laughing and playing for a long time. I personally cannot wait for the release.

In the game, you can recruit up to thirteen members of Coon and Friends to your team, including Mysterion, The Human Kite, and the infamous Coon himself. Combine your special powers with the heroes from Coon and Friends to eliminate anyone that gets in your way and defeat the dark power that has spread its evil tentacles over South Park. 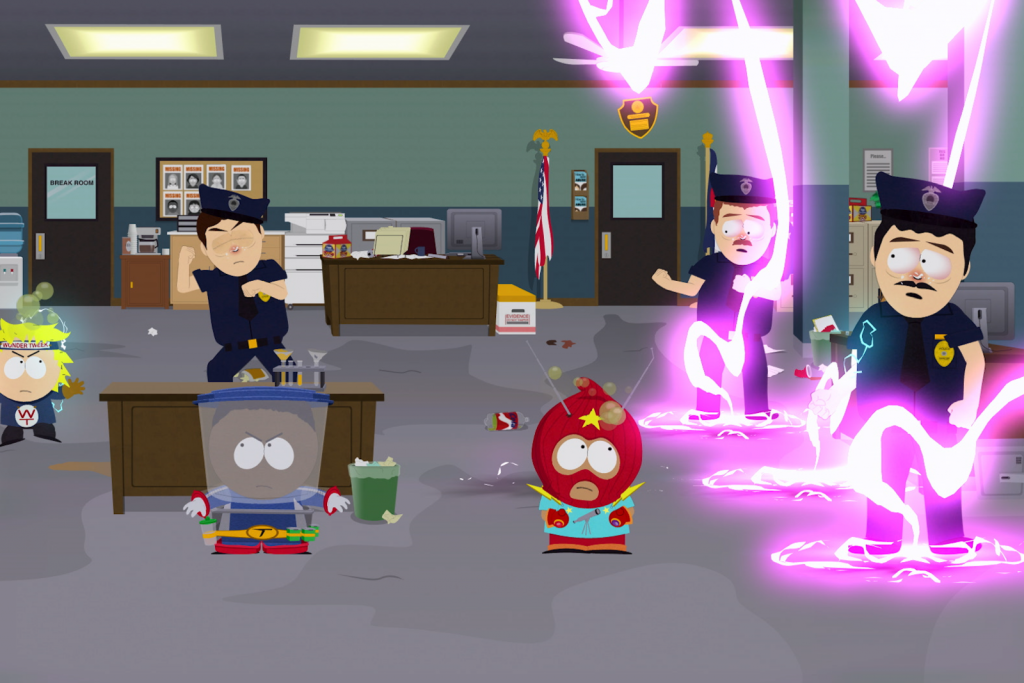 The game provides an all-new, dynamic combat system which offers new opportunities to manipulate time and space on the battlefield, and a revamped looting and crafting system gives you the freedom to develop and refine your powers as you progress through the game. You can find loot hidden throughout the land and follow recipes to craft your own outrageous equipment to aid you in battle.

*All media has been callously ripped from the developer’s website