Grimm Forest review — Once upon a time 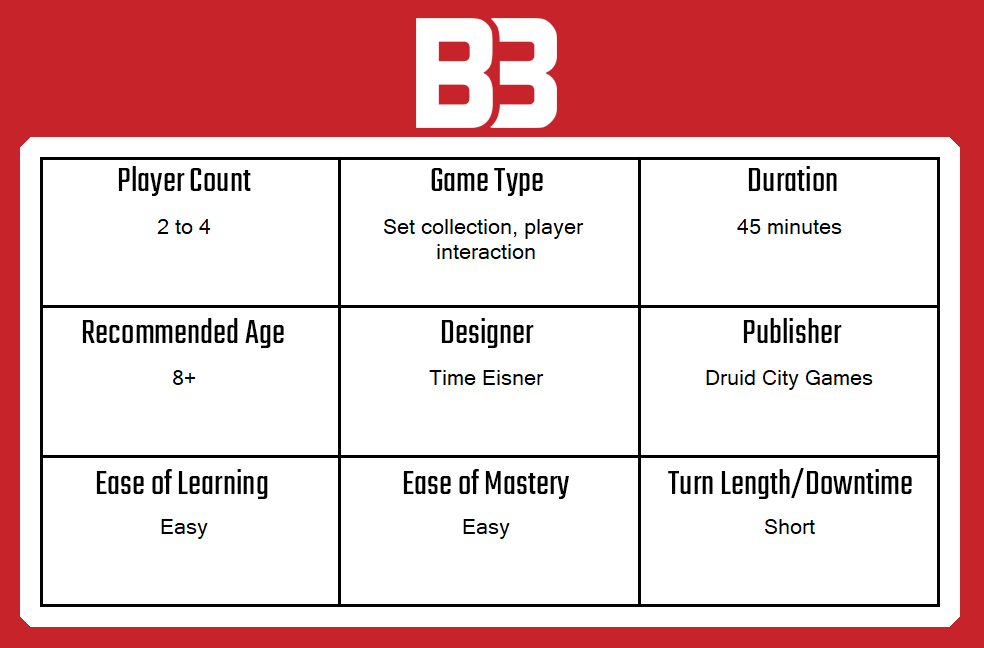 Every child knows the story of the Three Little Pigs and their nemesis, the Big Bad Wolf. We’re also taught from an early age to learn the moral of the story: hard work and patience will triumph over taking the easy route. Or will it? In The Grimm Forest, two to four players take on the role of descendants of the original pigs, challenged with building houses, making fairytale friends and avoiding a host of potential foes.

The Grimm Forest is a fairly straightforward game, inextricably linked to the Three Little Pigs theme. Players must collect straw, wood and bricks to construct houses, just like the pigs in the story. The first pig to complete three houses (out of any material) wins. Along the way, drawing fable cards might spawn monsters or affect the way that resources are distributed in some other way. Friend cards (drawn during the build process or on certain other occasions) can offer powerful benefits to the player who draws them, but each pig can only have one friend in play at any given time.

A key concept of The Grimm Forest is that when the pigs visit gather locations, they split whatever is there (rounded down) between however many pigs visit the same place. Choosing which location to visit is done in secret using a personal deck of gather cards, so getting to a location on your own is a mix of luck, intuition and reading the game state. Obviously every pig wants as many resources as possible for themselves, so gamesmanship and misdirection is very much encouraged.

Among the fable cards, several (including a number of monsters) have negative effects on other players, introducing a number of confrontational mechanics. Most of these are fairly mild and involve messing with the chosen gather locations, changing the way resources are shared out or adding a bonus to certain spaces but not others. Resources can be converted into building sections in the second phase of each turn and the first player to build three houses wins. If more than one player completes three houses in the same turn, the sturdiest houses win the tie. 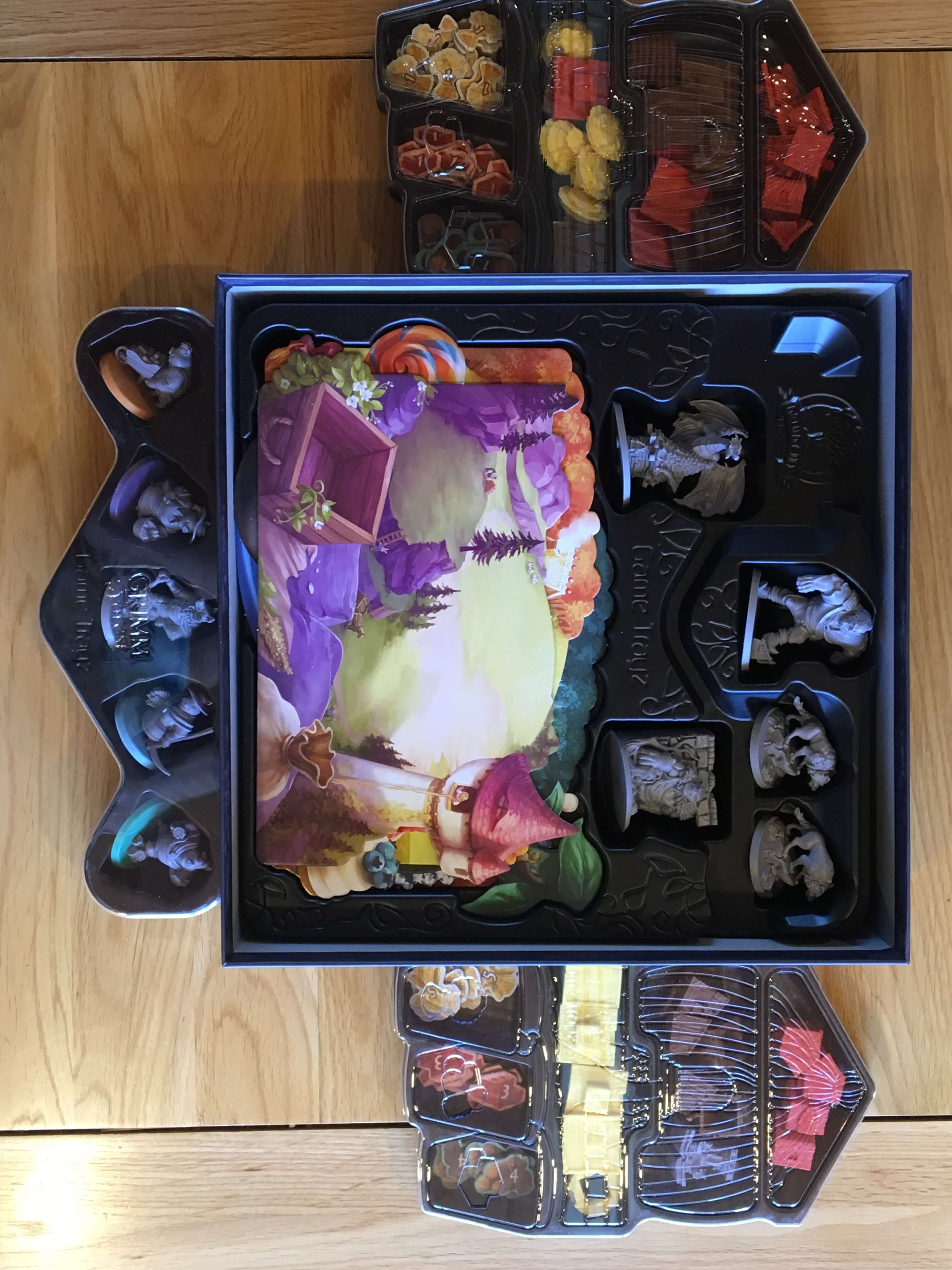 Whilst I am privileged enough to see many exceptionally well made games, few are as delightful and well considered as The Grimm Forest. For starters, it comes in a large box with the rarest kind of inserts — a properly customised set of storage containers for all the pieces. The pieces themselves are equally impressive, with a nice mix of plastic and thick-cut card, not to mention more than just a few large and nicely detailed miniatures for the pigs and various monsters.

Each player has their own home board with a unique look and colour scheme, whilst each resource-gathering spot also has its own board. Only straw, wood and brick boards are used at two or three players, whilst in four-player games, a fourth resource board is introduced. The fourth board is the market, which is replenished with one of each resource type, rather than a larger number of one fixed resource. House pieces are plastic rather than wood and each house has foundations, walls and a roof. Each of these slot together to create the finished article, which is a lovely feature.

Cards in The Grimm Forest share the same artwork as the box and match the pieces elsewhere in the game exceptionally well. Every single one is adorned with beautiful images of fairytale creatures and characters including Snow White, Rapunzel, Little Red Riding Hood and more. The artwork on these cards is so good that it’s almost a shame the cards are not even more prominent during gameplay, but regardless, it’s always a pleasure to see them. The manual is very easy to pick up and learn the game from, so between great looks and simplicity of teaching, getting The Grimm Forest to the table is never difficult. 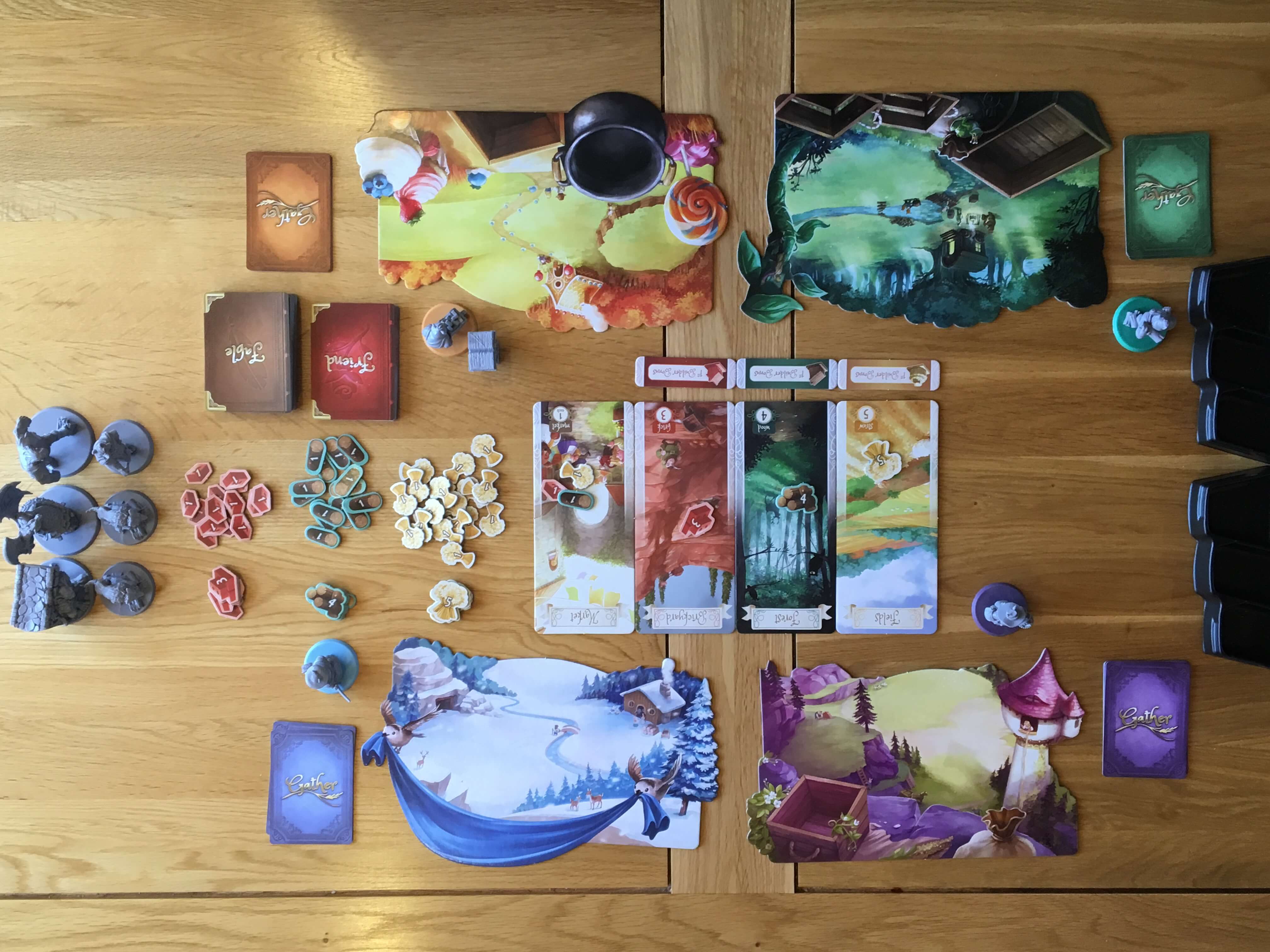 Playing The Grimm Forest is very straightforward, allowing it to sit at the more complex end of gateway games. A few basic phases make up the structure of the game and within them, there are a few possible variations on what the players might choose to do. The first of these is the gather phase, during which each player secretly places their gather card (to indicate which location they will take resources from) as well as a fable card if they wish.

Depending on the number of pigs at each location, you divide the available resources (set at the beginning of the game, or at the end of each turn) equally, rounding down. This basically means that players are incentivised to push their opponents off certain gather locations if their fable card allows, or enhance their own resource-gathering potential where they can. It is possible for one or two players to take a runaway lead in resource collection, but because many fable cards use fractions (like halving) to apply penalties, it is just as easy to peg those leaders back. Fable cards are revealed at the same time as gather cards, but when they are actually resolved is listed on them.

After gathering, players enter the build phase, wherein each pig takes two actions in player order. The available actions are to collect a resource of each type, build the next level of one building (if affordable), use a friend ability or collect a fable card. Most of the time you’ll probably want to build at least once and then, more often than not, take a fable card. After all actions are resolved, the resource boards, gather cards and pigs are reset and the next round is ready to begin. 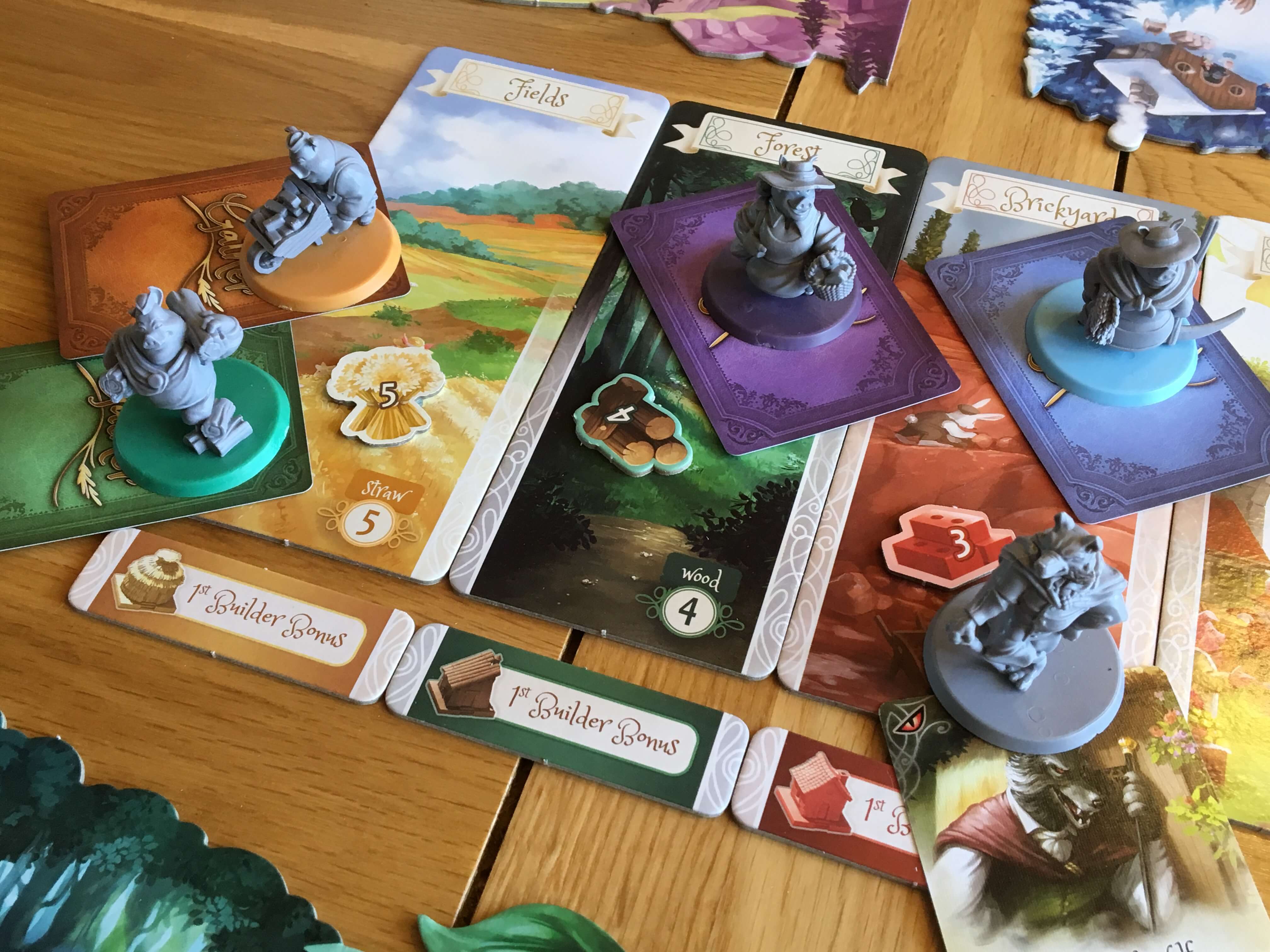 Aside from being easy to learn and teach, which makes it very approachable, The Grimm Forest is also pretty cutthroat, which I like a lot. At least as many fable cards focus on punishing the other players as enhancing your own position, so everyone soon gets used to their plans being ruined on a continuous basis. Friend cards can fairly routinely be discarded to counteract the effects of monsters (for example Red Riding Hood removes the Big Bad Wolf) so there is a bit of a mitigation to the outright take-that features of the game.

That said, The Grimm Forest is a fairly lighthearted but nonetheless confrontational game. You really can’t get through a game of it without interacting with the other players in a negative way. I’ve said so in other reviews, but to repeat it here: I’m fine with that. Not everyone loves take-that and confrontational mechanics, however, so it’s important to recognise that they are a big part of the game, should it be an important consideration for your gaming group.

The inclusion of so much focus on interactions also means that The Grimm Forest is considerably better at four players than it is at two, which requires the use of a dummy player. Three players is also good fun, but it does tend to mean that one player is either left alone or unfairly targeted (or at least feels that way) whilst at four, everyone tends to be punished and rewarded in roughly equal measure. Even at two players, The Grimm Forest is still fun, but it’s just nowhere near as exciting as it is at four. 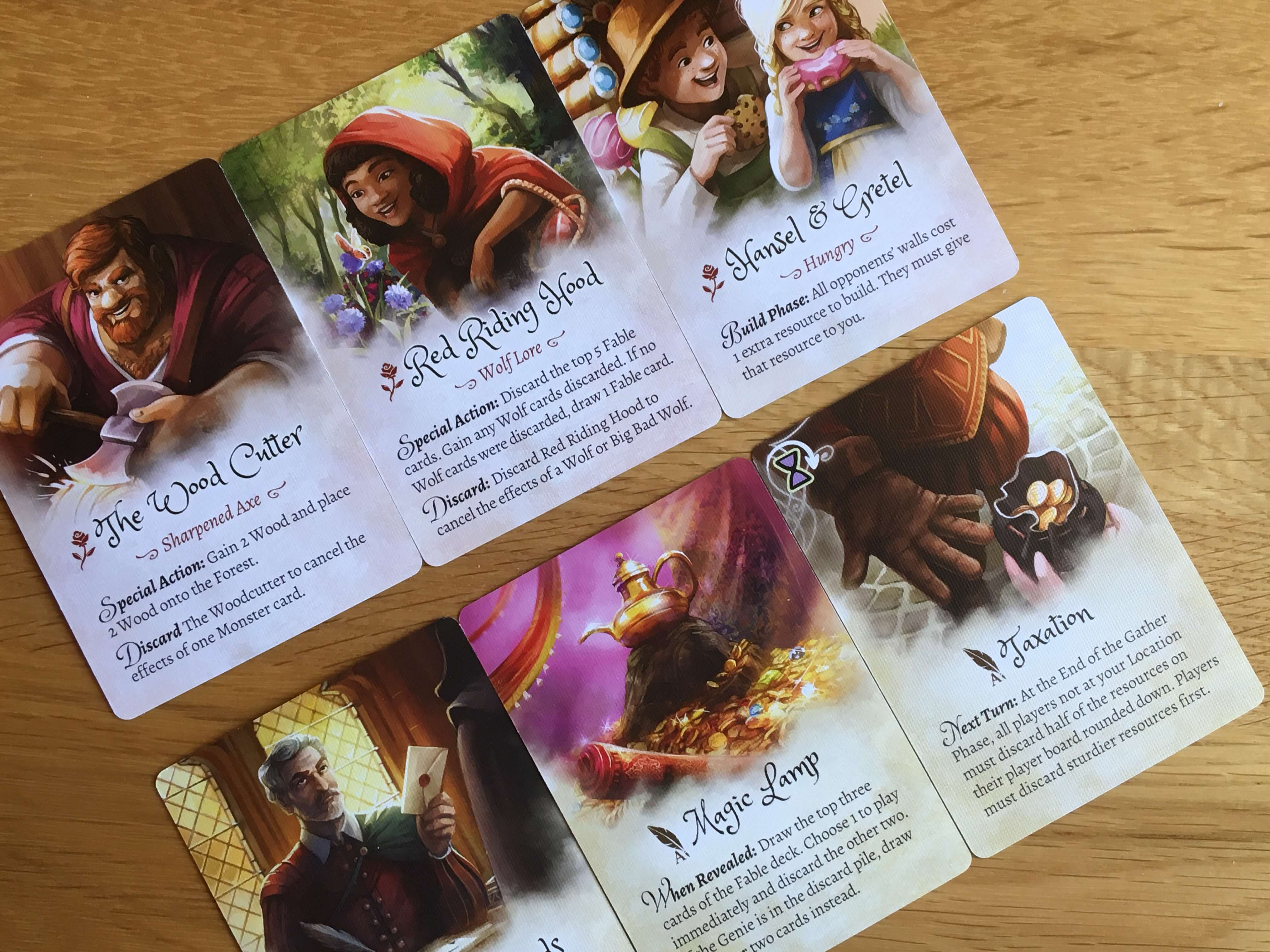 Ultimately, The Grimm Forest has a lot going for it, if you’re ok with the interactive elements. Regardless of how it plays, it’s a beautiful-looking game which builds around a familiar theme that I think anyone from about seven years old and upwards can recognise and enjoy. The miniature and component quality is second to none, whilst the inclusion of a box organiser is something I’d like to see a lot more of.

With a manual that is easy to learn from and a game flow that is simple to pick up and play, combined with excellent presence, you should have no trouble getting The Grimm Forest to the table. When you do, it’s fun at all ages and player counts, but especially well suited to the chaotic fun of a four-player experience. If the players can avoid taking it too seriously, everyone is likely to have a lot of fun and a fair few laughs. The game usually takes less than an hour, so however many plans are dashed aside, it’s all over relatively quickly. A very solid inclusion in any library in my opinion, and one which is fairly unique in form and theme.