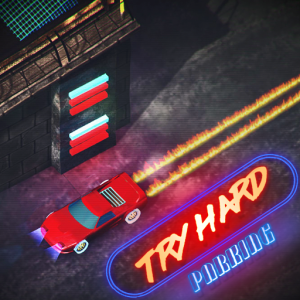 Masquerading as a game about driving, Try Hard Parking takes classic marble run style requirements of balance and timing, and instead sets you out with a simple car, and a death trap of a city.

As I said in the 30-second elevator pitch, the game manages to evolve the marble run puzzle genre almost perfectly, it’s good to see. I’m also quite a fan of the low poly buildings, and their neon signs; it gives off a strange escape from the dystopian cyberpunk future vibe to the whole thing.

The main negative? The game in it’s current form only has 4 levels, and the current target amount is the paltry sum of 10. If the developer can double or triple that then we might be on to a winner, however the game will almost definitely suffer for lack of replaybility if the level count is kept so low.

Try Hard Parking is expected to launch just before Christmas 2016, when it launches it will do so for Windows PC, Mac & Linux.