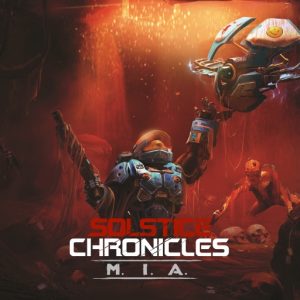 Where The Red Solstice tasked you (and up to 7 seven friends) with killing your way through earth as a squad, Solstice Chronicles tells the story of a dude and his drone sailing solo through the swarms to retake Earth.

While the prequel’s visuals were fantastic, Chronicles completely blows that out of the water, detail and lighting has been massive upgraded in this title, and it’s hard not to gawp at the gas and flames in the screenshots so detailed they are.

Visuals aside, there’s a diverse variety of locations available which have their own environmental dangers, and some of the larger enemies and bosses look absolutely fierce, and will no doubt prompt massive changes in tactics to defeat them. Boffo.

Solstice Chronicles MIA is set to launch next year for Windows PC & Mac.