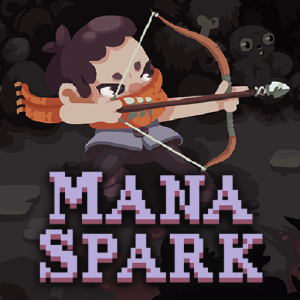 Top Down Roguelike (nothing new there) where you need to employ strategy as you’re only armed with a bow and arrows, and the enemies are vast, numerous and – through an AI system – actually collaborate to flank and trap you.

The art style really appeals to me, specifically the art of the world around, it reminds me of Zelda: Link to the Past.

Having played the demo for the game I was really impressed with the enemy AI. Earlier levels of the game had single opponents (albeit many requiring multiple arrow hits to fell) however combat was easily managed through discounts and upgrades. Upgrades being found in chests or bought at the store in between levels with the gold you’ve plucked from your enemies.

Later in the demo however, when you get to a point wherein multiple enemies appear in close proximity to one another, including mages, deadly mages, it becomes more clear that enemies are doing more than madly dashing at you – kobalds hide behind shielded chaps, mages combine their power to encircle you.

It’s only a short demo, but well worth a go. The game currently handles exceptionally well (although Xbox controller support doesn’t seem to exist yet) during those brief 4/5 floors. Depending on your luck with upgrades you may well be able to easily defeat the beholder at the end – with my poison arrows and the perks (oh-ho) of a sip of coffee I certainly could.

I couldn’t locate a release date for the game, however it is confirmed for Mac, Linux & PC when it does launch.