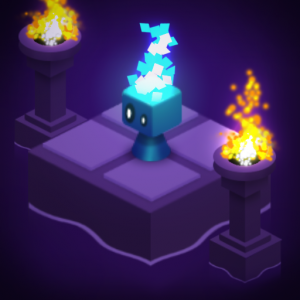 Escape the cavern by dodging spike traps, pitfalls and other dangers through the game’s 40+ levels.

I really like the art decisions made for the game, that combined with the music gives the game an ever-so-slight nods towards older room-based adventure games. The promise of 40+ levels of increasing difficulty bodes well as well.

That said, there are two things that I do feel I have to point out about the greenlight campaign as it stands: 1) While possibly out of the developer’s hands (but possibly not) there’s pages upon pages of identical comments which normally involved vote fixing, campaign fixing or key bribery – none of these have a place on Steam. 2) I know it’s only minor, but the developer used the word ‘addicting’ which is a misappropriation, and seems to go hand in hand with careless projects; that’s just a self developed theory though.

Despite these two, I did vote up, as I do think it’ll be a good game from what has been shown; was the pitch any weaker however, they would have swung it to a no vote for me.

Cavern Escape doesn’t currently have a release date scheduled, when it does launch it will do so for Windows PC & Mac.